Heart failure is a clinical syndrome that results from an inability of the heart to maintain adequate cardiac output.

Heart failure (HF) is a clinical syndrome with multiple aetiologies. It is commonly secondary to ischaemic heart disease or hypertensive heart disease. The condition is characterised by progressive shortness of breath, fatigue and fluid overload. Unfortunately, HF is a progressive disorder associated with high morbidity and mortality. Prognosis is generally poor; approximately 50% die within five years.

There are many different ways to classify heart failure that reflect the complexity of the condition:

In these notes, we review the important concepts of heart failure. For more detailed information, check out our notes on Heart failure.

The aetiology of heart failure is complex.

These are the most common causes of heart failure.

Valvular disease may lead to either acute or chronic heart failure.

Arrhythmias (abnormalities of normal conduction) may cause acute heart failure through decompensation.

Typically heart failure is caused by a reduced cardiac output. In some cases, however, the cardiac output may be raised but the systemic vascular resistance very low. Causes include:

To understand the mechanisms leading to heart failure, we need to understand what is governing our blood pressure.

Pulse pressure is the difference between the systolic and diastolic blood pressure.

MAP is dependent on the cardiac output and systemic vascular resistance 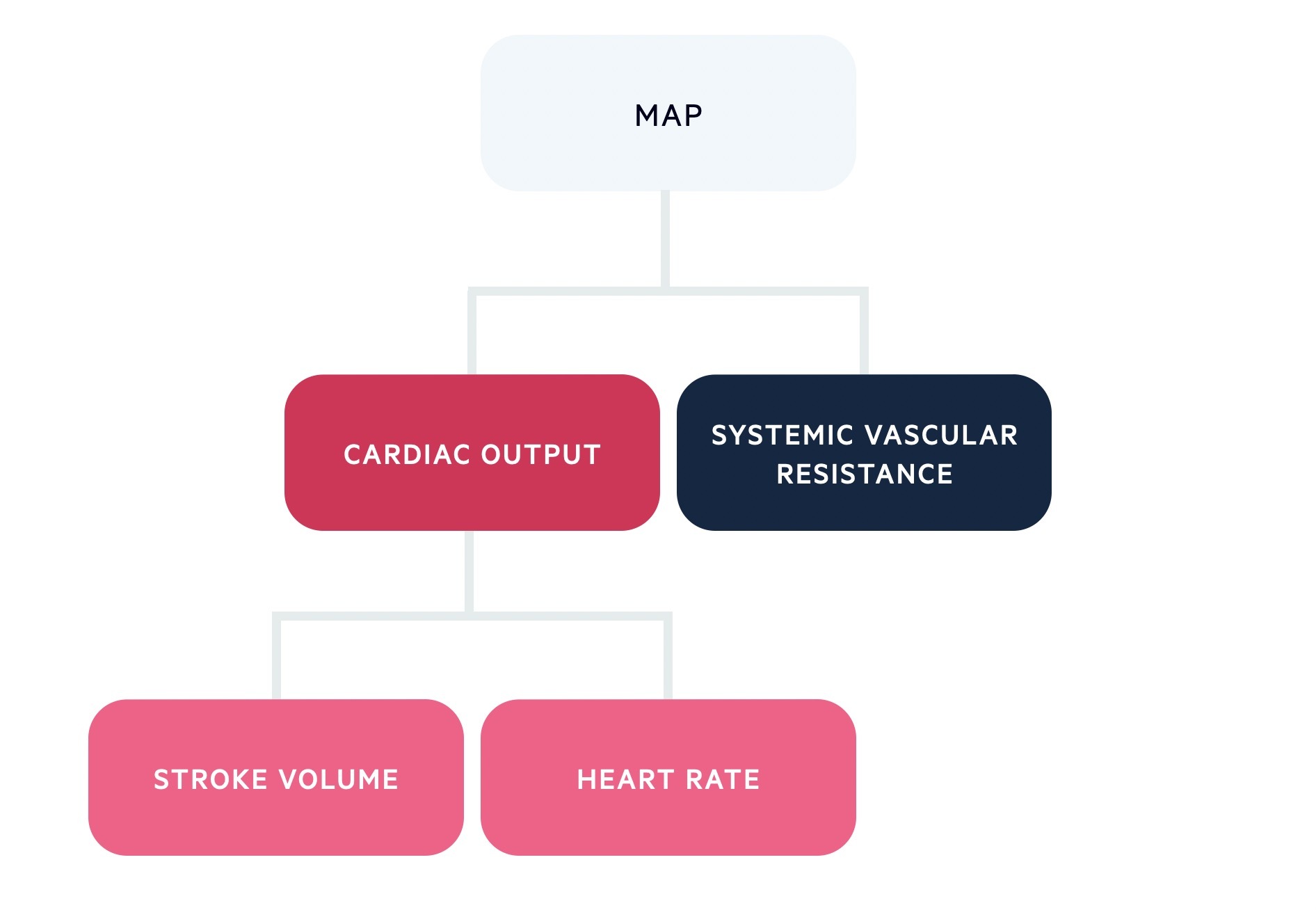 Several factors can influence the stroke volume and thus the cardiac output.

Preload in influenced by venous return and filling time

Afterload is influenced by vascular resistance and valvular disease

Contractility is influenced by myocardial strength and the autonomic nervous system 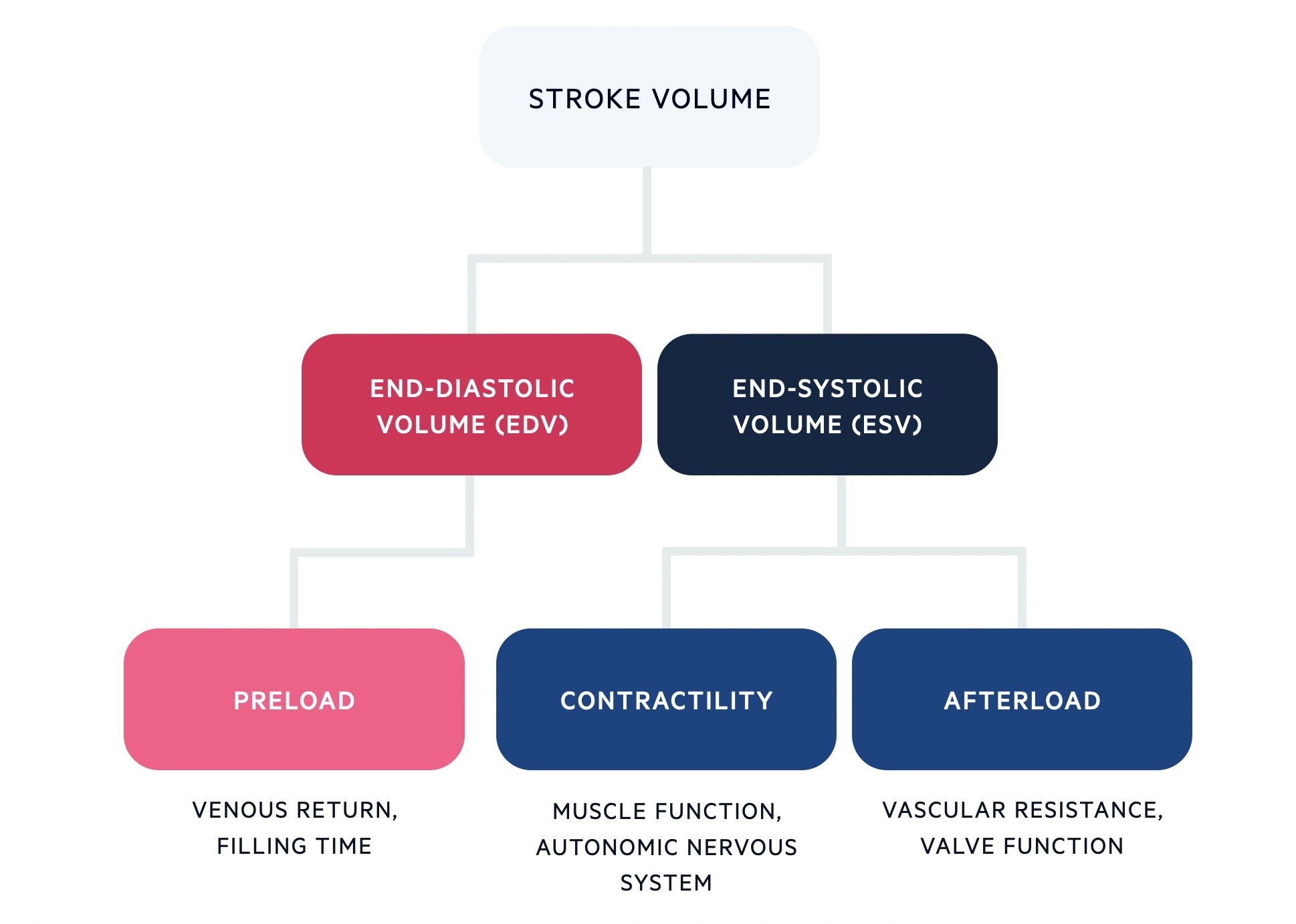 The Frank-Starling law describes the relationship between ventricular stretch and contractility, which is at the core of heart failure.

Essentially stretching of cardiac muscle (within physiological limits) will increase the force of contraction.

Discovered in the mid-19th century by Otto Frank and Ernest Starling. The ability of the heart to respond to increased venous return by increasing the stroke volume is essential to normal cardiac function. Failure to do so would result in input-output mismatch and pooling of blood in either the systemic or pulmonary circulation. 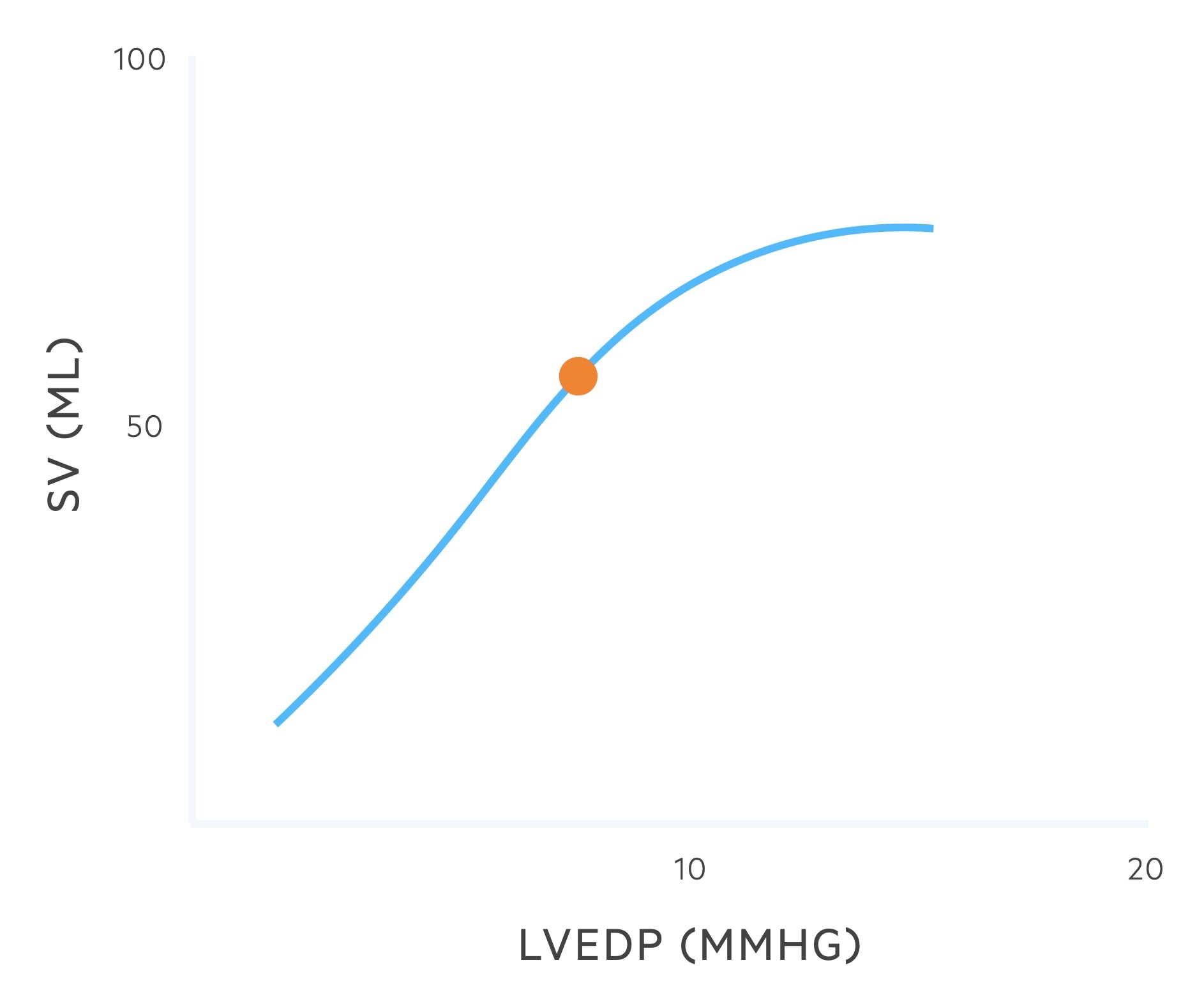 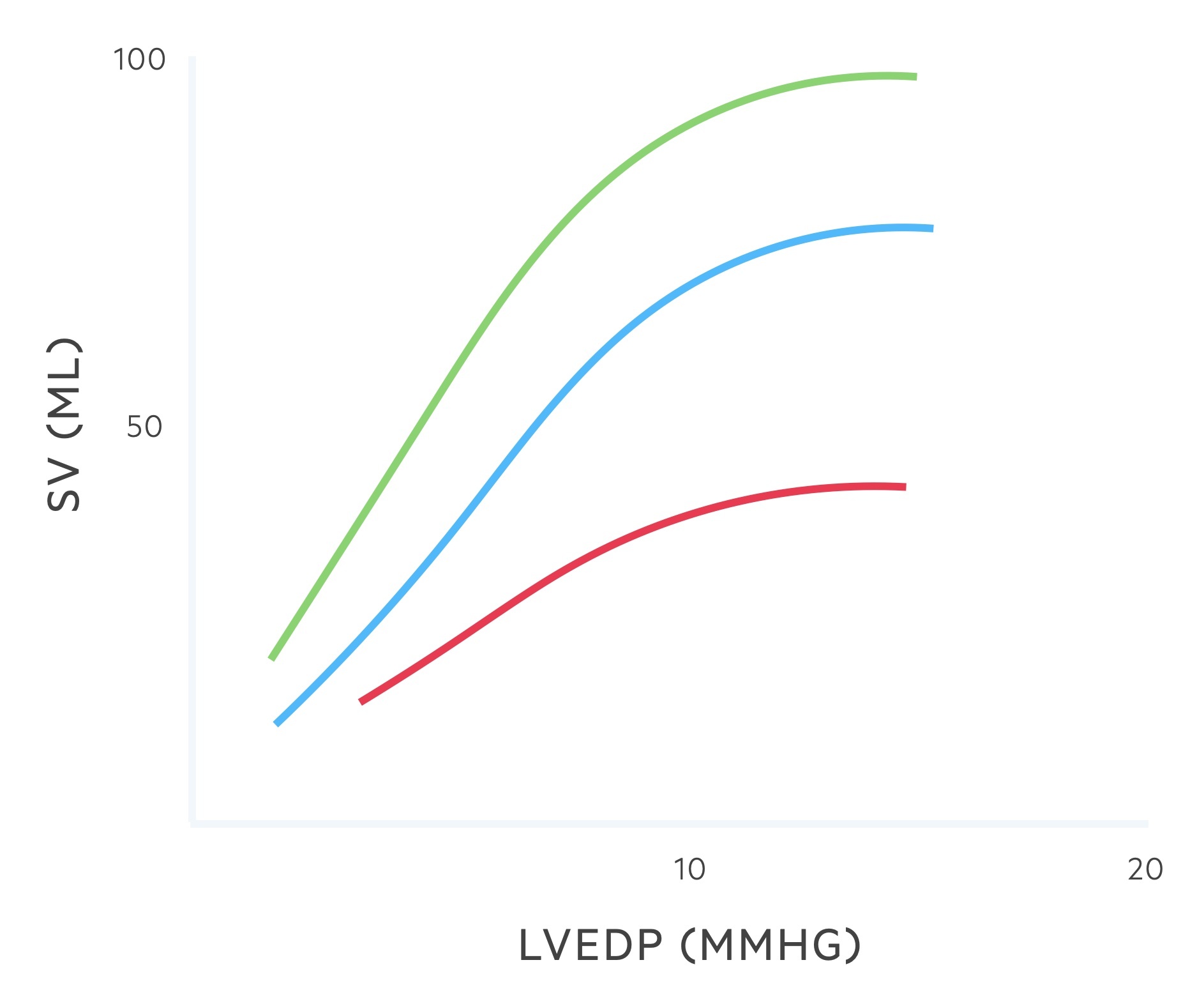 Interestingly, the heart does not sit on a single curve, rather it is affected by afterload and the inotropic state.

In effect, venous return governs where on the curve the heart sits while the pre-existing afterload and inotropic environment control which curve it sits on.

The relationship between stretch and contractility has a physiological limit to how much it can compensate for an incresase in preload. In a heart that is failing, continued increaases in preload actually leads to a depressed contractility and subsequent fall in stroke volume. 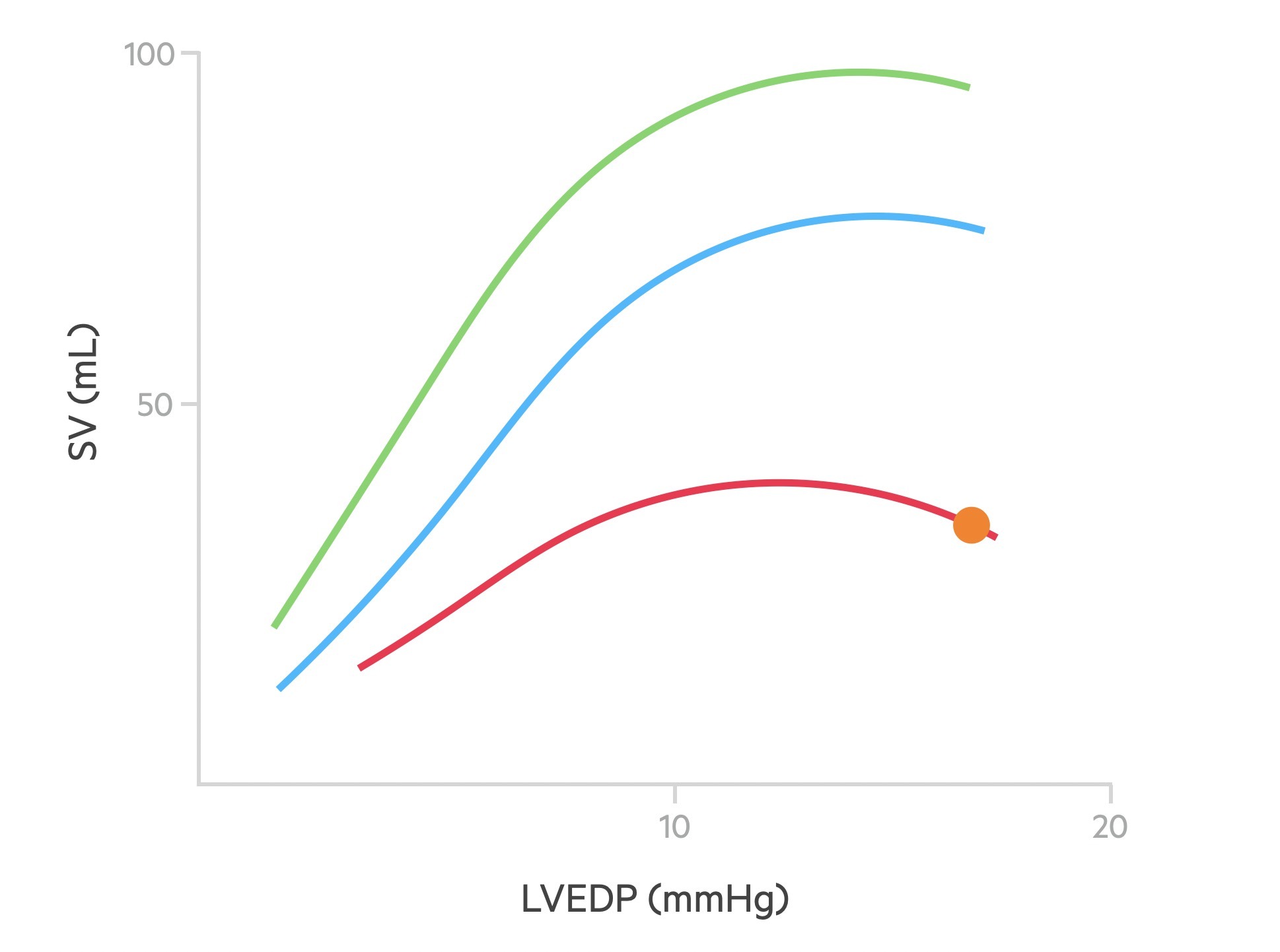 The fall in stroke volume leads to a fall in cardiac output. This leads to a reduction in mean arterial pressure. As a consequence, the heart has several physiological mechanisms to prevent a sustained fall in mean arterial pressure. This includes increasing vasoconstriction through the sympathetic nervous system and renin-angiotenin system (RAS). The RAS system has the added benefit of increasing sodium reabsoprtion in the kidney nephrons that helps to retain water and thus leads to an increase in preload. However, as we have seen a failing heart is already beyond its physiological limit and the increases in preload now place strain on the failing heart leading to worsening function. We can see how in a failing heart, all of these normal physiological adaptations to maintain cardiac function and mean arterial pressure become progressively ineffecive.

Heart failure typically manifests with dyspnoea and fatigue (which may limit exercise tolerance) and signs associated with fluid retention. 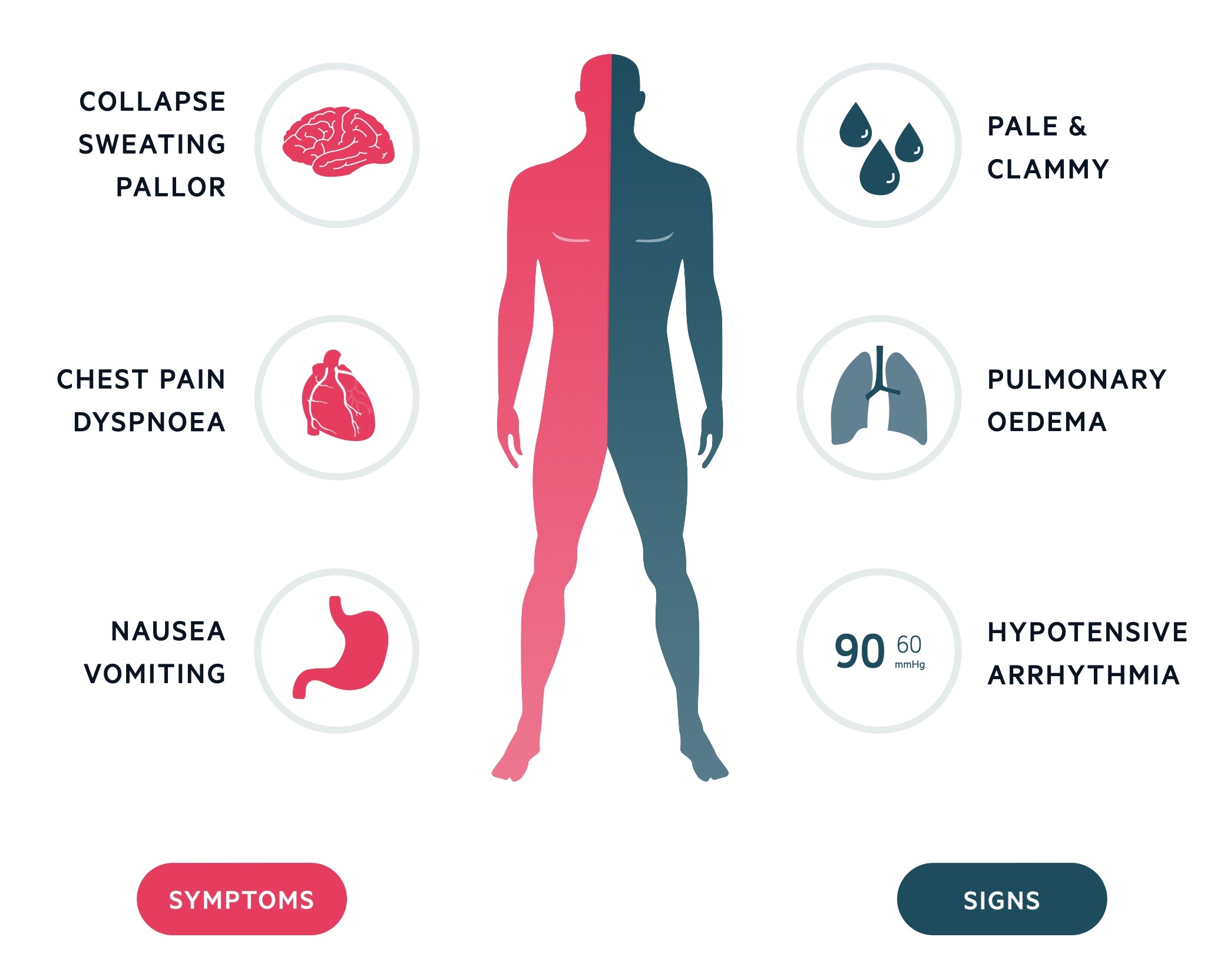 NICE recommends echocardiography and specialist assessment in patients with suspected heart failure based on BNP.

In patients with suspected heart failure, the first step is taking a detailed history and performing a clinical examination. The next step is measuring a BNP, which is used to risk stratify patients and determine the urgency of referral.

B-type natriuretic peptide (BNP) is a protein released by cardiomyocytes in response to excessive stretching. It is used to assess the likelihood of heart failure. Conditions other than heart failure which may raise BNP levels include diabetes, sepsis, old age, hypoxaemia (PE and COPD), kidney disease, and liver cirrhosis. It has an excellent negative predictive value. This means a negative test should warrant investigation into others causes.

The BNP, along with a detailed history, examination and other relevant investigations, may be used to decide who to refer for further assessment: 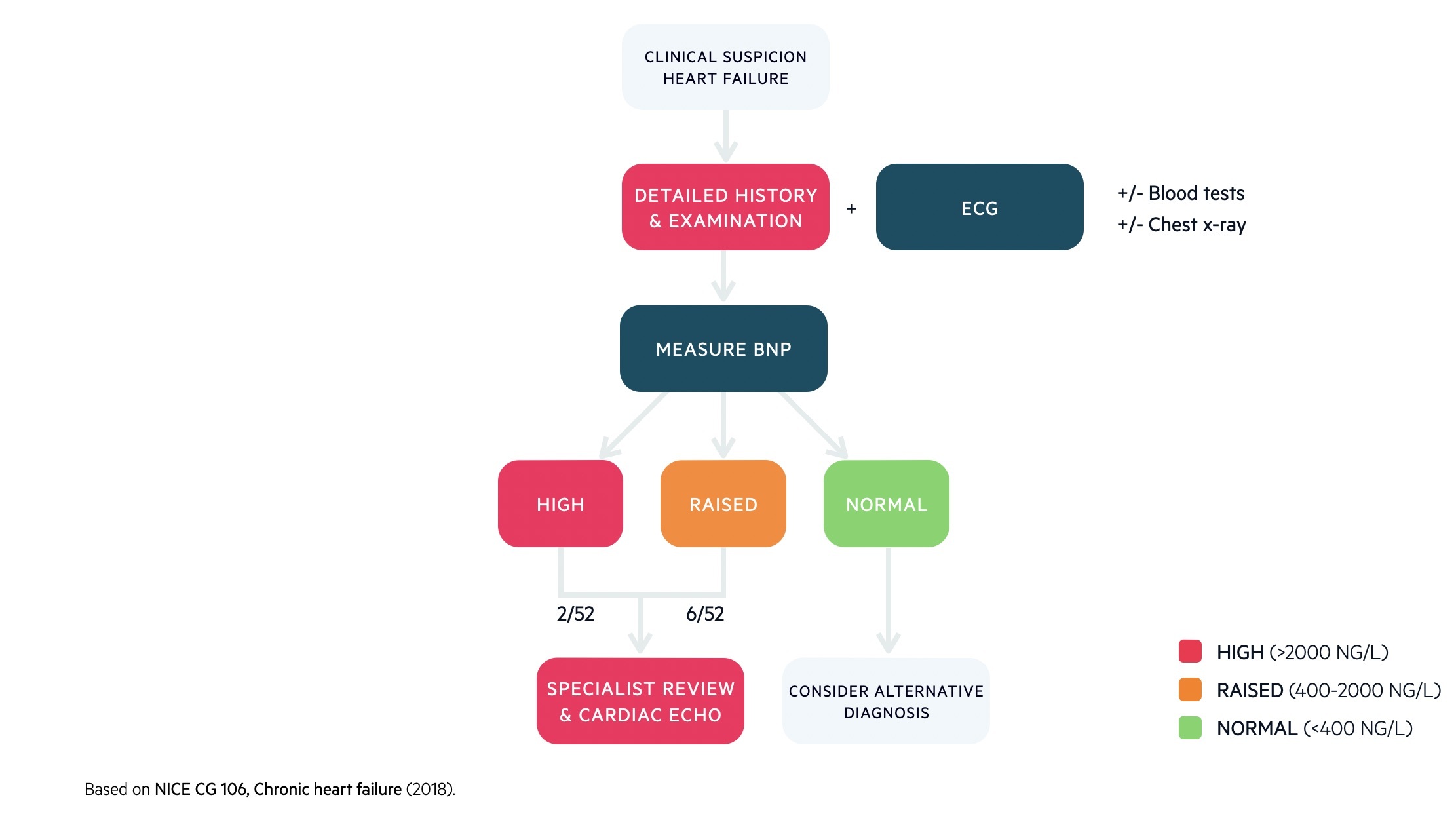 A variety of investigations should be used to investigate for the possible cause of heart failure and any suspected complications.

Investigations are discussed in detail in our notes on Heart failure.

Heart failure causes pulmonary oedema/congestion that may be seen on x-ray. 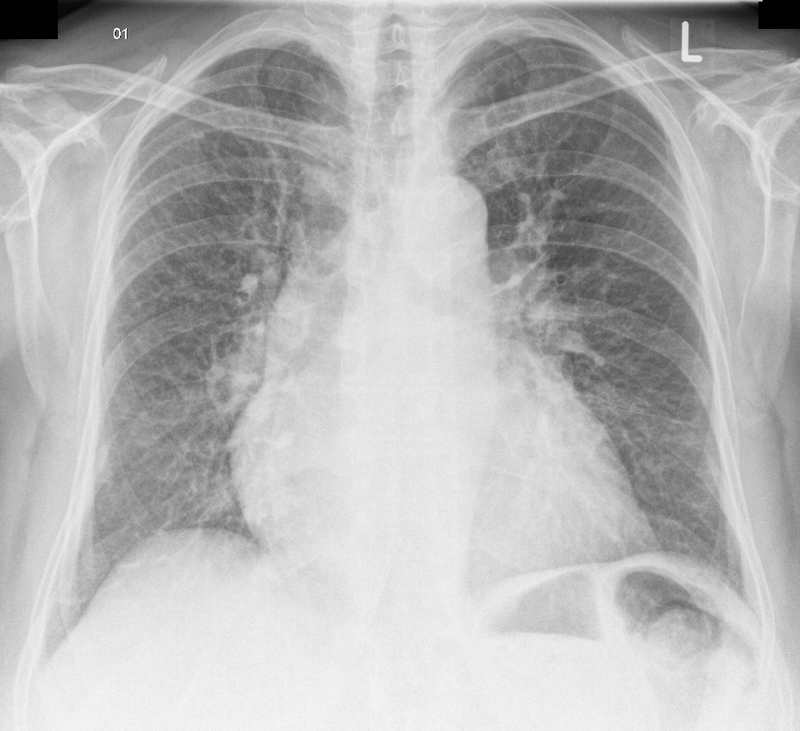 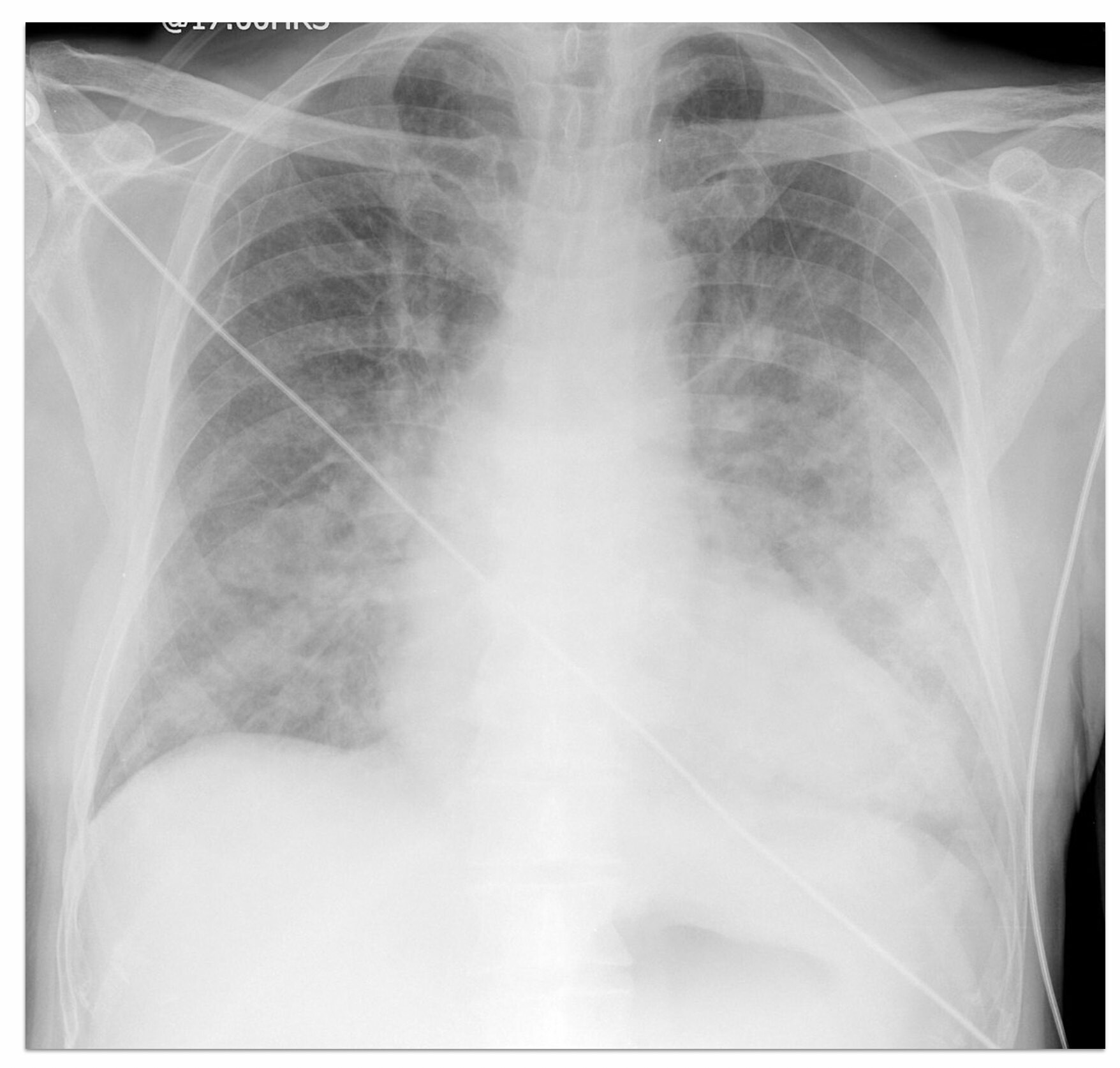 A transthoracic echocardiography (TTE) is the main investigation for the confirmation of heart failure. It should be completed in patients with an elevated BNP. A TTE may still be warranted, regardless of BNP, if clinical examination reveals a murmur or the ECG is abnormal.

The main determinant of an TTE is to look at the ejection fraction of the heart. This helps to differentiate suspected heart failure into three groups:

NOTE: additional echo criteria are used to help diagnose HFpEF or 'diastolic heart failure'. These are broadly based on ventricular thickness, chamber size and other features.

Management follows NICE guidance and is based upon the type of heart failure.

Here, we summarise the key treatments for the management of heart failure. For a more detailed discussion see our additional notes on Heart failure.

There is no clear evidence of benefit for using many of the medications that are given in heart failure with reduced ejection fraction.

Some medications can be trailed that may reduce admissions such as mineralcorticoid receptor antagonists. However, the mainstay of treatment is the use of diuretics such as furosemide to manage fluid overload and addressing the underlying cause (e.g. blood pressure control in hypertension).

Acute heart failue may represent a sudden acute insult in a previously well individual such as secondary to a myocardial infarction, acute valvular abnormality or arrhythmia. Alternatively, patients with pre-existing heart failure may develop an 'acute decompensation' due to a concurrent illness or ongoing precipitating factor. Patients with acute heart failure can be extremely sick and may need intensive care support.

The principal management of acute heart failure is 'offloading' that refers to removing fluid from the body with the use of diuretics (e.g. furosemide).

Other options depend on the severity and mechanism of heart failure and can include:

We'd love to hear your feedback on our Cardiology - Part 3 notes.