Metabolic acidosis is characterised by a pH < 7.35 and reduced plasma bicarbonate level (< 22 mmol/L).

Metabolic acidosis is one of the most common acid-base abnormalities seen in clinical practice. It is characterised by acidosis (pH < 7.35) and a low plasma bicarbonate level (< 22 mmol/L). 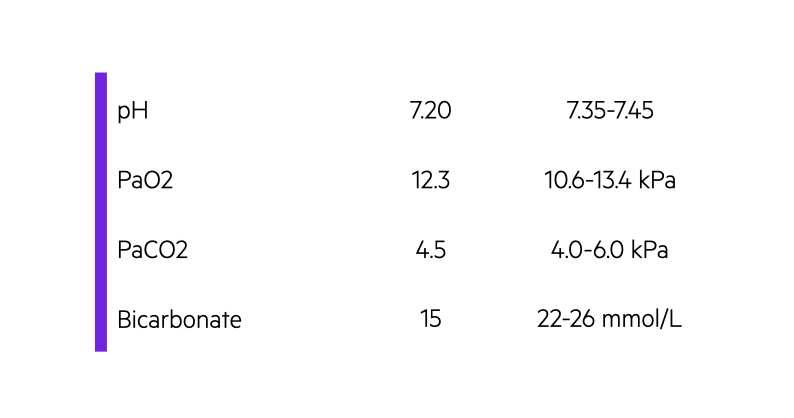 Metabolic acidosis, put simply, can be from a primary increase in hydrogen ions (e.g. addition of strong acid) or reduction in bicarbonate concentration:

There are numerous causes of metabolic acidosis. These are broadly differentiated based on the anion gap. The anion gap is the difference between the major measured cation sodium (Na+) and anions chloride (Cl-) and bicarbonate (HCO3-).

The aetiology is critical because the fundamental management is identification and treatment of the underlying cause.

The anion gap refers to the difference between the major measured cation sodium and anions chloride and bicarbonate.

The anion gap can be calculated by subtracting the sum of chloride (Cl-) and bicarbonate (HCO3-) from sodium (Na+).

In the context of metabolic acidosis, the anion gap essentially indicates whether there has been an accumulation of unmeasured anions (e.g. organic acids), which subsequently consume bicarbonate due to its buffering ability.

Normal anion gap acidosis is commonly due to renal or GI bicarbonate losses.

In normal anion gap acidosis, there is loss of bicarbonate in the absence of anion generation. There is a reciprocal increase in chloride concentration to maintain electroneutrality (i.e. maintain equal state between positive and negative ions). This increase in chloride is why it is also termed hyperchloraemic metabolic acidosis.

Raised anion gap acidosis is due to accumulation of an unmeasured anion that consumes bicarbonate.

In raised anion gap, there is consumption of bicarbonate due to accumulation of an unmeasured anion. There is no reciprocal increase in chloride concentration. It is usually due to renal disease, high lactate, ketones or several number of toxins. The causes of a raised anion gap acidosis can be remembered using the mnemonic MUDPILES 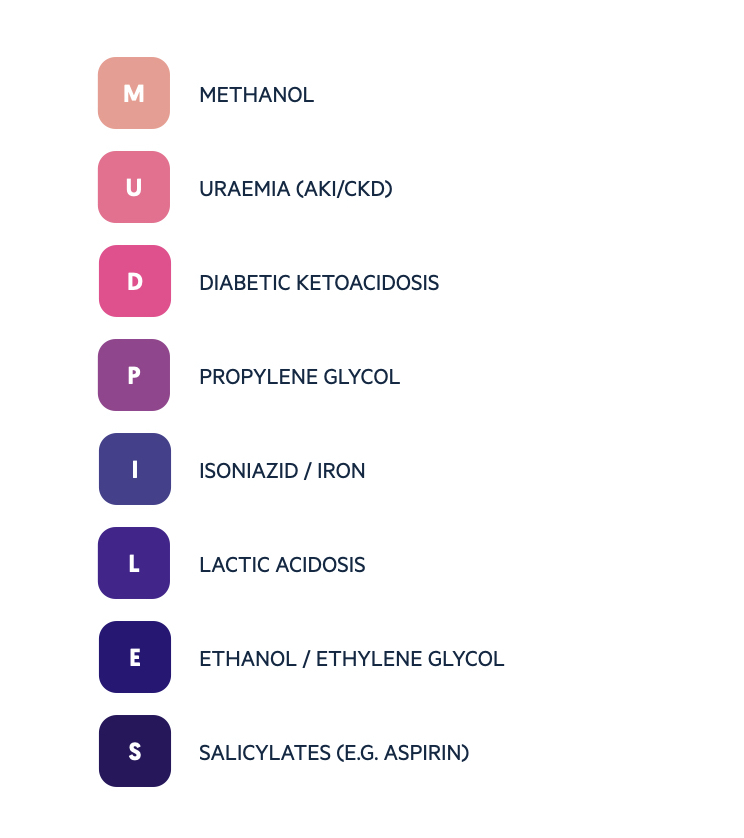 NOTE: lactate is produced during anaerobic respiration. It is a good marker of peripheral tissue perfusion.

We'd love to hear your feedback on our Metabolic acidosis notes.