Rate and rhythm are the first things to assess when analysing an ECG.

Due to spontaneous depolarisation, different parts of the heart can initiate electrical activity at different set rates. This acts as a ‘back-up’ if the normal pathway fails.

Rate is defined as the number of times the heart beats per minute.

Rate on the ECG can be one of three broad categories:

There are two ways of calculating the rate: division method and multiplication method. 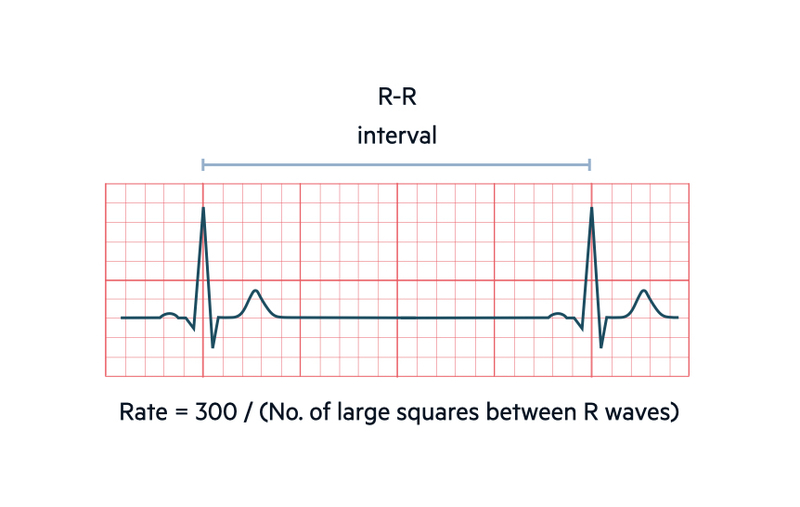 This method is used when the rhythm is regular (i.e. the distance between two adjacent R waves is constant).

This method can be used for regular and irregular rhythms. It is a quick and easy way to estimate the rate from the ECG. Alternatively, you can multiple the number of QRS complexes within 50 large squares (equivalent to 10 seconds) by 6. The length of the ECG rhythm strip is usually 10 seconds making this an easy method.

On an ECG, rhythm refers to the part of the heart that is controlling the initiation of electrical activity.

The term ‘sinus rhythm’ (SR) refers to depolarisation that is initiated in the SAN. The other common phrase is ‘normal sinus rhythm’ (NSR), which is a more complete term.

NSR is defined as:

In clinical practice, the terms SR and NSR are often used interchangeably. However, it is technically correct to only use NSR when all the above defining features apply. When using the term SR, we should comment on the presence of any abnormalities (e.g. heart block, extra beats, abnormal ventricular activity).

As part of rhythm assessment, it is important to determine whether the ECG trace is regular or irregular. 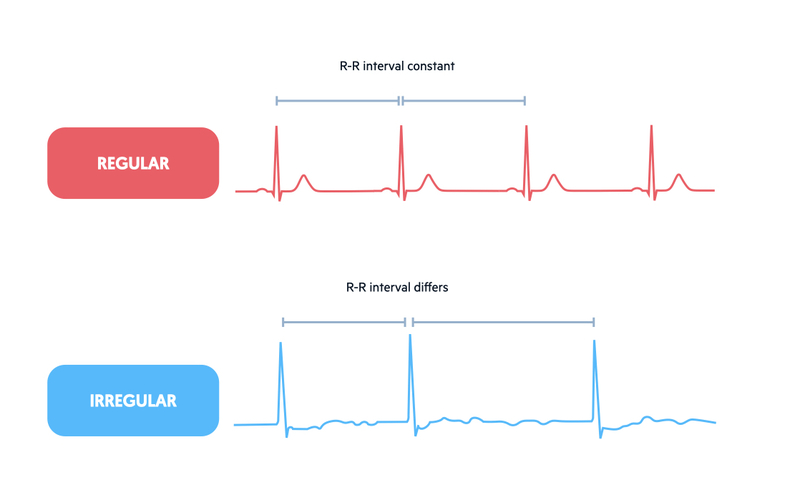 The SAN can be influenced by several external factors including the parasympathetic nervous system via the vagus nerve, and by respiration through reflexes originating in the lungs.

Inspiration can inhibit vagal tone increasing the heart rate, whereas expiration can increase vagal tone reducing heart rate. This difference may lead to a small beat by beat variation, which is felt clinically as an irregular pulse. On the ECG, it is observed as SR with an alteration in the R-R interval >0.12 seconds between different R waves. We term this sinus arrhythmia. It is generally considered a normal variant in healthy young adults.

We can broadly divide abnormal heart rhythms into slow (bradycardias) or fast (tachycardias). 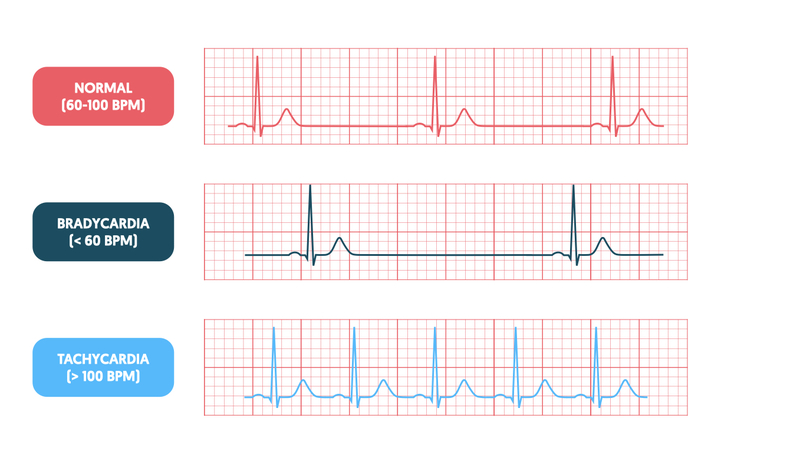 We term abnormal heart rhythms arrhythmias and they can be broadly divided into bradycardias and tachycardias.

When a rhythm originates from above the ventricles in the atria, it is termed a supraventricular rhythm.

SR is an example of a supraventricular rhythm, which originates within the SAN above the ventricles. However, when we discuss ‘supraventricular’ rhythms we are usually referring to ectopic rhythms that originate from an abnormal position.

If the AVN node and His bundle complex are in tact, electrical activity that is derived from any supraventricular area (including the AVN itself) will pass normally through the ventricular conducting system. This means the QRS complex, which is a marker of ventricular depolarisation, will remain the same. In other words, it remains narrow (< 120 ms). Therefore, an ectopic supraventricular rhythm is seen as an abnormality in the preceding P wave and/or PR interval. 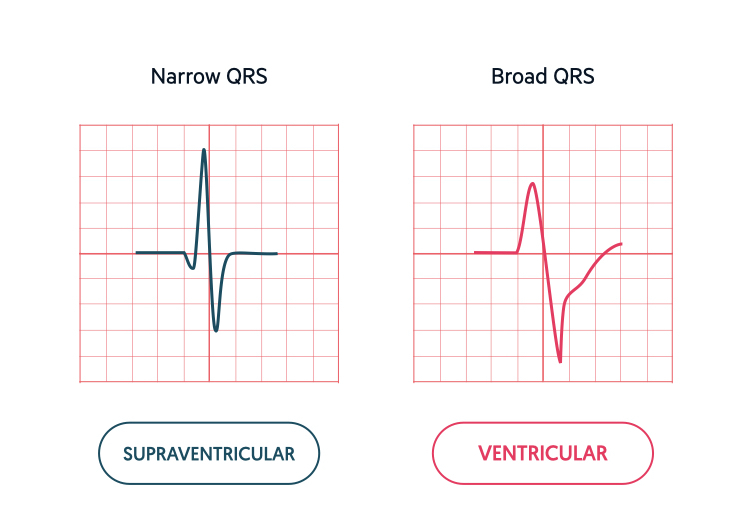 NOTE: The caveat to this rule is the presence of a bundle branch block, which will appear as a wide QRS (> 120 ms) even if the rhythm has a supraventricular origin.

An abnormal supraventricular rhythm may arise due to failure to generate or propagate (transmit) electrical activity leading to the concept of an escape rhythm. An escape rhythm is when another area of the conducting system (e.g. AVN) kicks in as the primary pacemaker for that, and any subsequent, cycles. An example is a junctional escape (electrical activity initiated in the AVN).

In a sinus pause, there is failure of the SAN to generate a P wave. This leads to a pause on the ECG followed by the SAN node kicking in again or an escape beat from pacemaker cells lower down. 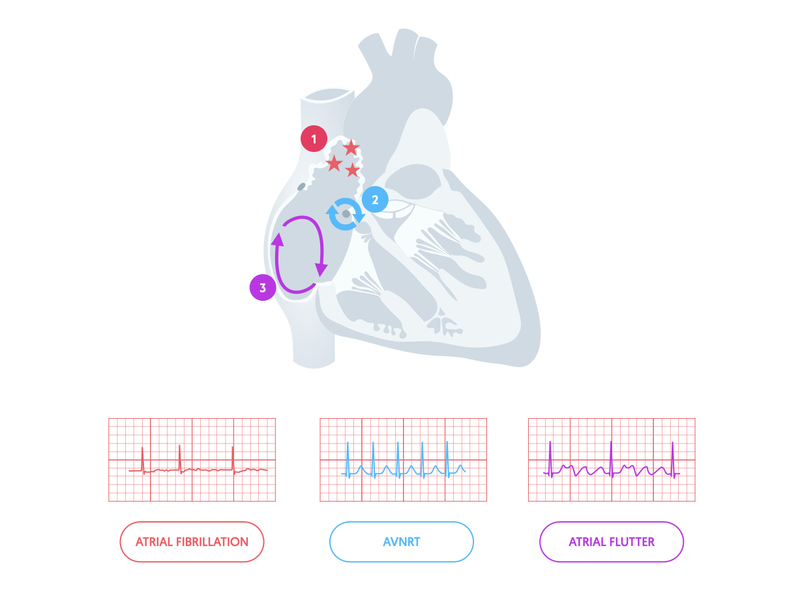 When a rhythm originates from within the ventricles, it is termed a ventricular rhythm.

A ventricular rhythm may originate from anywhere within the ventricles. As the ectopic initiation of electrical activity does not pass through the normal conduction system, it can only slowly depolarise the myocardium leading to a broad QRS (> 120 ms). This helps us differentiate it from a supraventricular rhythm (unless there is a co-existent bundle branch block).

An abnormal ventricular rhythm may arise as an escape rhythm due to failure of propagation of electrical activity from the atria to the ventricles. This is seen in compete heart block due to disease of the AVN and presents with a very slow ventricular rate due to its much lower rate of spontaneous depolarisation.

NOTE: Due to the fibrous rings of the heart, electrical activity may only pass through the AVN to the ventricles.

Alternatively, a focus of electrical activity may occur within the ventricles leading to rapid depolarisation. This type of rhythm is referred to as ventricular tachycardia, which is a life-threatening arrhythmia that can lead to loss of cardiac output and subsequent cardiac arrest. 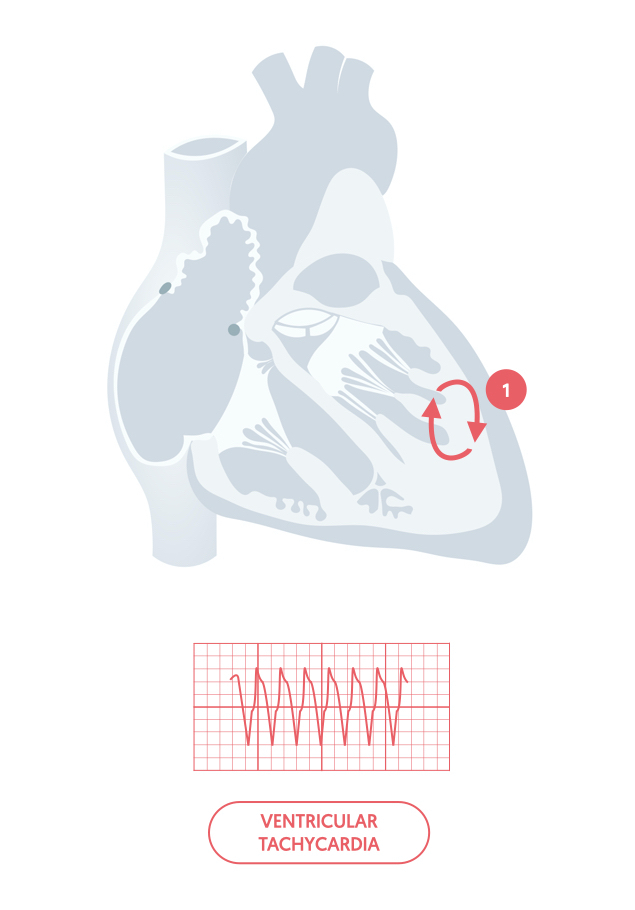 When part of the heart depolarises earlier than it should, we term the accompanying heart beat an extrasystole or ‘ectopic’.

An ectopic beat may originate from the atria, around the AVN (i.e. nodal region) or ventricular muscle. An ectopic beat occurs early in the cycle, which differentiates it from an ‘escape’ beat, which occur late in the cycle. Atrial and nodal ectopics are usually grouped together as ‘supraventricular ectopics’. 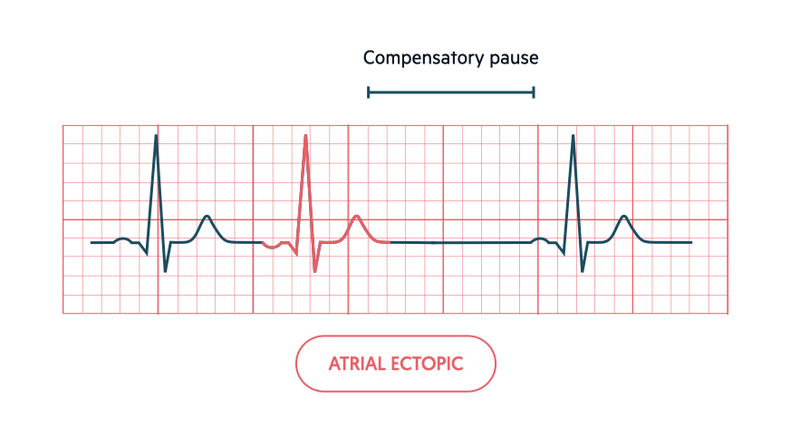 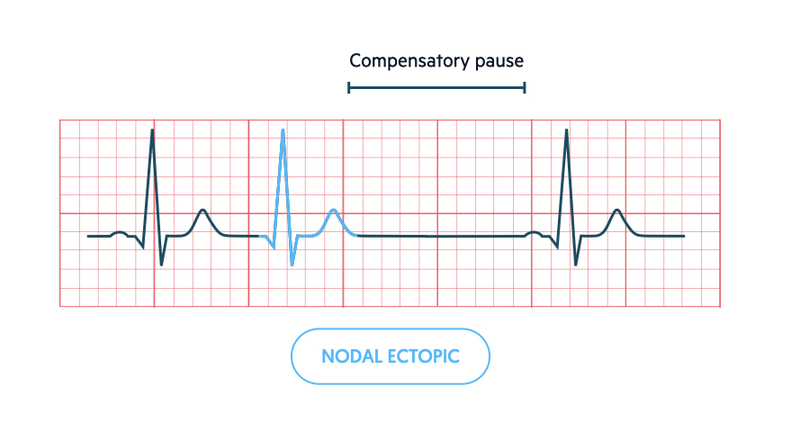 We'd love to hear your feedback on our 2. Rate & rhythm notes.