Bradyarrhythmias may develop due to a variety of intrinsic or extrinsic factors.

Within the heart, a slow rate may occur due to failure to initiate, or transmit, electrical activity.

Failure to initiate electrical activity can cause another part of the heart to take over as the primary pacemaker. This is called an escape rhythm. For example, if the sinoatrial note (SAN) fails to undergo spontaneous depolarisation the atrioventricular node (AVN) may initiate electrical activity. Escape rhythms are typically slow (e.g. < 60 bpm).

When there is failure to transmit normal electrical activity this leads to a ‘block’ in the electrical pathway. This can occur within the SAN, AVN or bundle branches. Depending on the level and severity of the block, it may appear as a bradyarrhythmia.

These intrinsic abnormalities in conduction leading to bradycardia are commonly due to degenerative fibrosis, ischaemia, hypertensive heart disease or infiltration (e.g. amyloid).

Most commonly, an increase in parasympathetic activity (i.e. vagal tone) may lead to a reduction in heart rate through its control on the SAN. This is usually seen in athletes who have a low resting heart rate.

Each of the specialised structures involved in cardiac conduction has an intrinsic rate of autorhythmicity.

Autorhythmicity refers to the rate of spontaneous depolarisation, and therefore, the number of times the heart beats per minute. Each part of the conducting system has its own intrinsic rate.

The rate of autorhythmicity is highest in the SAN, which is why conduction is initiated here. If the SAN fails to undergo spontaneous depolarisation, electrical activity can be initiated lower down. This may occur in another part of the atrium, the AVN or the ventricles. When this happens, we can it an ‘escape’ rhythm. 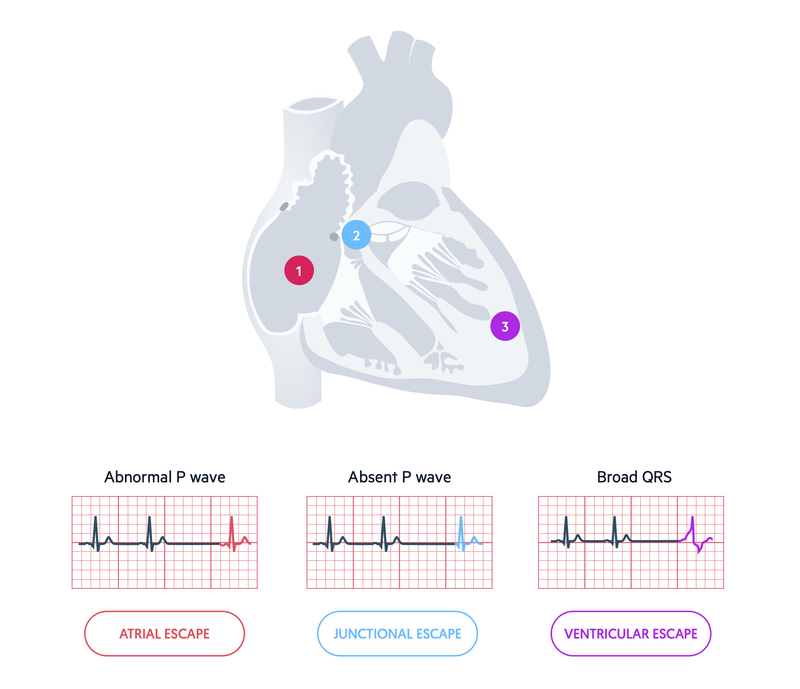 Under normal circumstances at rest, our heart should be in sinus rhythm with an accompanying rate of 60-100 bpm. If the defining features of normal sinus rhythm are met but the heart rate is slow (< 60 bpm), we call it sinus bradycardia. 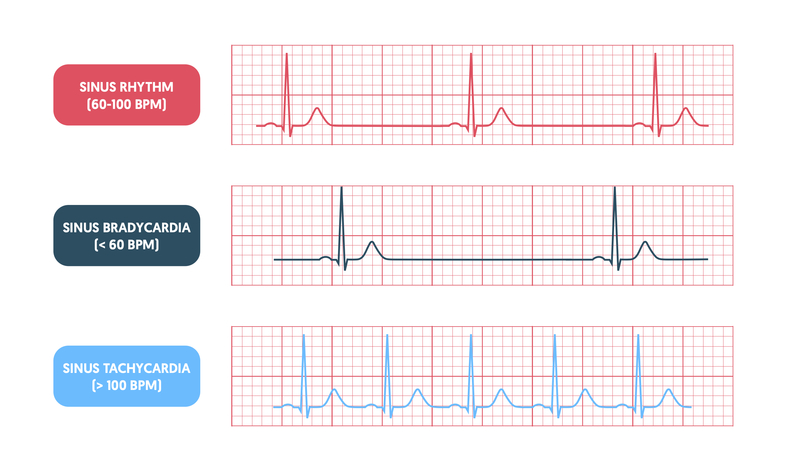 Failure of the SAN to initiate electrical activity can be seen as an absent P wave on the ECG.

The SAN is the main pacemaker of the heart that initiates electrical activity. Dysfunction of the SAN may manifest as failed initiation of conduction (e.g. pauses/arrest) or failed transmission of electrical activity (e.g. sinoatrial exit block).

A sinus pause is defined as a transient absence of P waves that lasts from 2 seconds to several minutes. It is due to failure of the SAN to initiate electrical activity. It may be followed by resumption of normal electrical activity from the SAN or appearance of an escape rhythm (e.g. atrial or junctional escape).

Sinus node dysfunction is a collective term that refers to conduction abnormalities affecting the SAN and surrounding tissue.

Sinus node dysfunction (SND), or ‘sick sinus syndrome’, comprises a variety of disturbances affecting both generation of electrical activity from the sinus node and transmission within the atria. It manifests clinically as a variety of ECG abnormalities including sinus bradycardia, sinus pause or arrest, sinoatrial exit block or chronotropic incompetence. Chronotropic incompetence refers to an inappropriate heart rate response to a physiological stimulus (e.g. exercise). 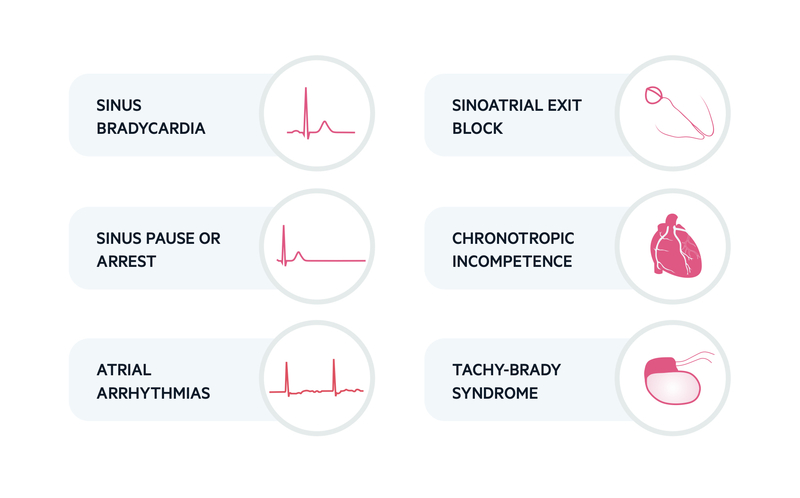 SND occurs due to depression of the normal autorhythmicity of the SAN and surrounding tissue. This may be due to intrinsic (e.g. fibrosis, ischaemia) or extrinsic factors (e.g. anti-arrhythmic agents).

Interference of the normal transmission of conduction within the AVN can lead to varying degrees of ‘block’.

We commonly refer to abnormal conduction through the AVN as ‘heart block’. These may be differentiated into three types: first-degree, second-degree and third-degree.

For more information on 'heart block' see our Conduction notes.

The clinical presentation of bradyarrhythmias may range from asymptomatic to shock.

Clinical features associated with bradyarrhythmias may be permanent, or occur intermittently due to the paroxysmal nature of the arrhythmia. They can present with a wide range of symptoms and signs.

The acute management of any bradyarrhythmia should follow an assessment using the principle ABCDE.

Assessment of an unwell patient should be completed using the structure airway (A), breathing (B), circulation (C), disability (D) and exposure (E). This remains true for any patient with a bradyarrhythmia. The resuscitation council guidelines provide a clear structure on the acute management of bradyarrhythmias.

Medications may be used in an attempt to increase the heart rate. Two common choices include atropine and isoprenaline.

Medications usually act as a bridge to more definitive pacing or while the underlying cause of bradycardia is treated. If these medications fail, temporary or permanent pacing may be indicated.

Pacing (temporary or permanent) delivers electrical stimuli to the heart via pacing leads.

Pacing may be required in an emergency setting (acute bradyarrhythmia), following myocardial infarction (ischaemia disrupts normal conduction) or as a long-term option in patients with bradyarrhythmias (i.e. completed semi-electively).

Methods of temporary pacing include non-invasive (transcutaneous) and invasive (epicardial or transvenous).

A pacemaker is a permanent electronic device that is inserted under the skin, usually in the upper left chest wall. 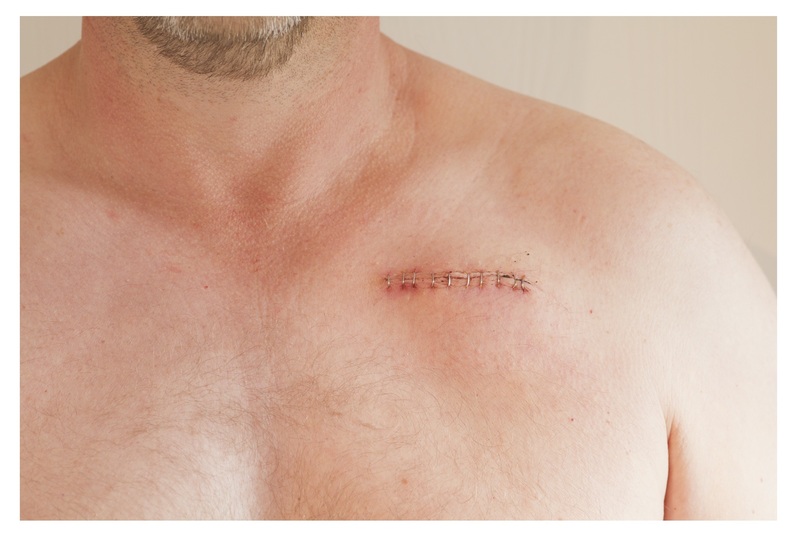 The pacemaker box is attached to wires, which are inserted into the heart via the transvenous route. These can be seen on plain film radiograph. 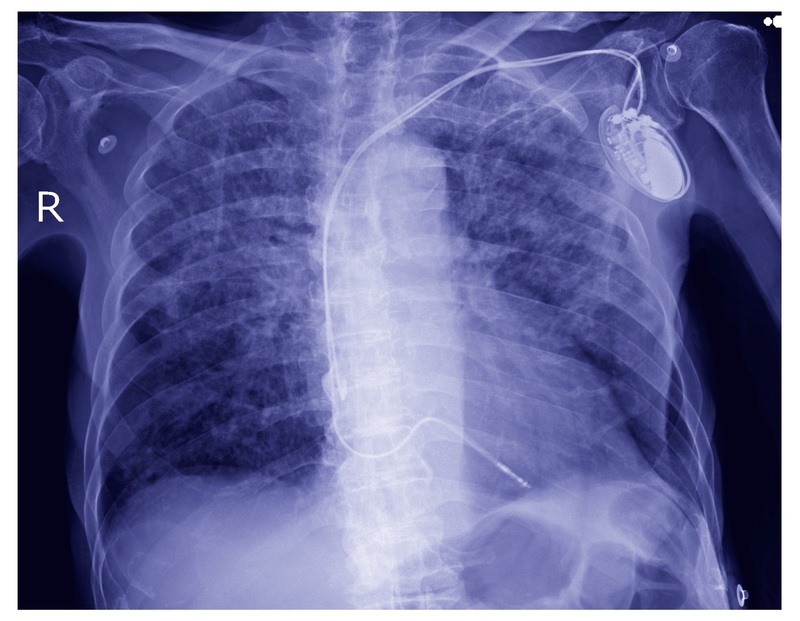 There are three main types of pacemaker:

Pacemakers have a five letter code, which tells you how it is functioning. The first three letters refer to its anti-bradycardic function.

We'd love to hear your feedback on our 5. Bradycardias notes.