Graphs include bar-charts, pie-charts, histograms, box-and-whisker plots and scatter diagrams. The type of graph used should be chosen according to the type of data being displayed. Be aware that graphs may be presented in misleading ways. Furthermore, graphs can be symmetrical, positively skewed or negatively skewed.

Qualitative variables have no numerical significance (e.g. we cannot add up or multiply together any values that are assigned to the categories). Qualitative data can be binary, nominal or ordered.

Binary variables, such as whether or not someone arriving at an A&E department is admitted to a ward, have only two categories.

Nominal variables have several categories (e.g. type of scan: CT, MRI, or PET). Any figures attached to the categories (such as CT = 1, MRI = 2, PET = 3) have no numerical meaning.

An individual categorised as having good health is less well than one whose health is rated as very good, but is in better health than someone who has a health rating of intermediate. Note that differences between categories (such as 4 - 3 or 3 – 2 in the example above) do not have a meaningful numerical interpretation.

Quantitative variables take measured values, which may be further divided into discrete or continuous variables.

Those consisting of whole numbers only are described as discrete quantitative.

An example is the number of visits that a patient makes to an outpatient clinic during a calendar year.

Quantitative variables may be continuous and can take values that are constrained only by the accuracy of measurement.

For instance, blood glucose level is usually stated in mmol/L to one decimal place with a normal individual typically having a value of approximately 5.5. Differences between quantitative values are numerically meaningful; two patients differ between themselves by precisely one outpatient visit per year whether their values are 2 and 1 or 12 and 11 (say).

Graphs display data and should be chosen according to the type of data being presented.

Commonly used graphs include bar- and pie-charts, histograms, box-and-whisker plots and scatter diagrams. Graphs can be symmetrical, positively skewed or negatively skewed. Be aware that graphs may be presented in misleading ways.

A bar-chart can be used for nominal data, ordered data or, if there are only a few categories, whole numbers.

The bars should be spaced apart, with each height being proportional to the category’s percentage out of the total number of observations. 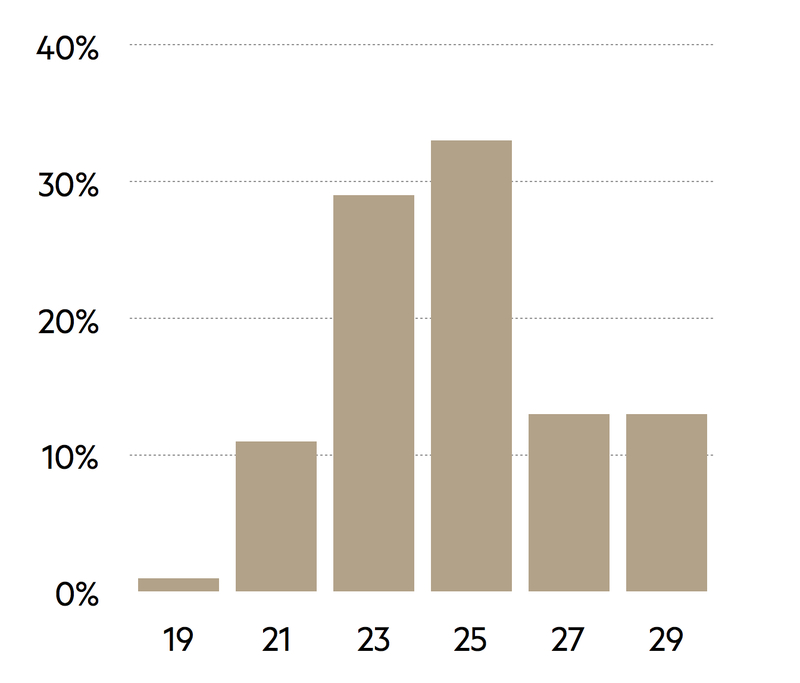 Pie-charts operate in a similar manner but use sectors within a circle; the angle of each sector is proportional to the category’s percentage out of the total number of observations. 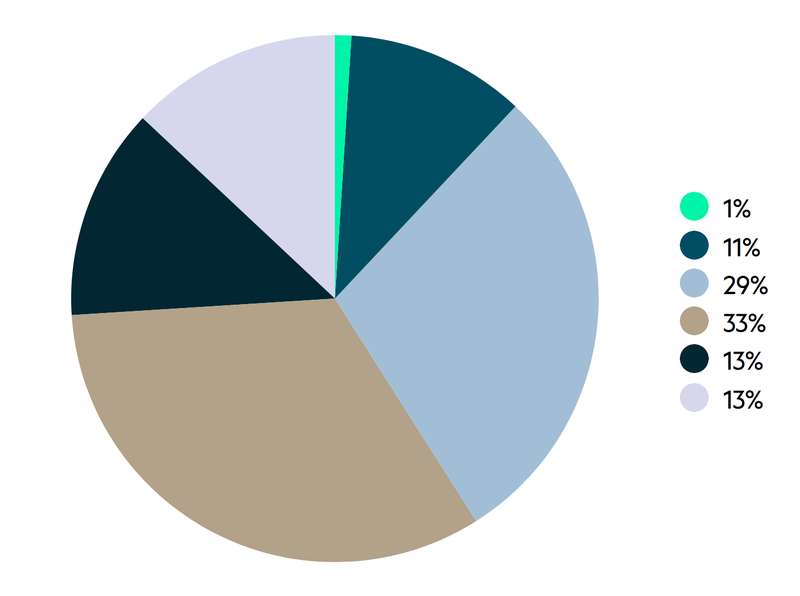 With quantitative data, histograms should be used rather than bar-charts. Bars should not have gaps between them as each represents an interval for the variable under consideration.

The number of intervals to be used should be considered carefully. Too few intervals may prevent important features of the distribution from being identified, whereas too many lead to a distribution with a jagged rather than a smooth shape. 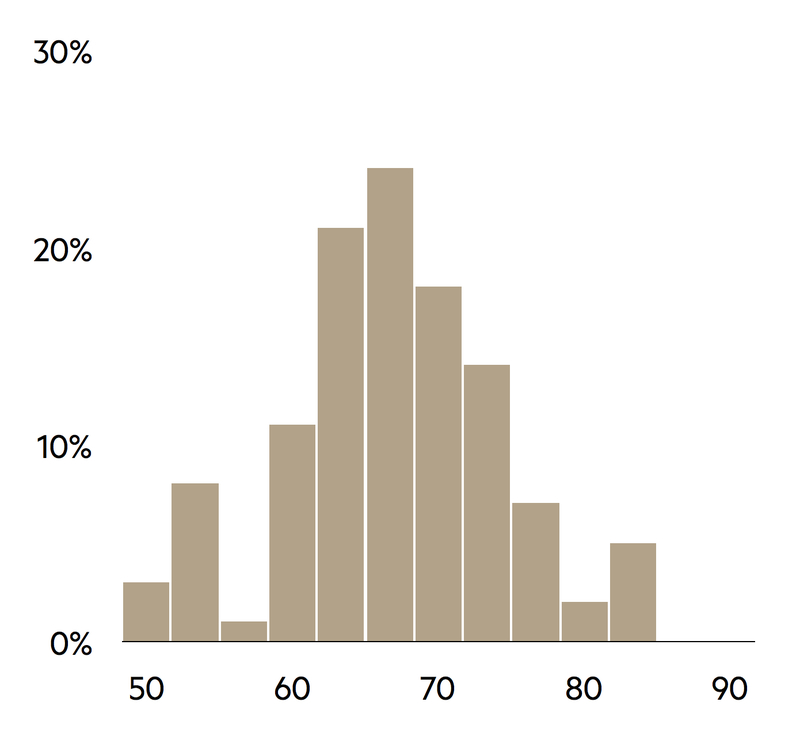 An alternative type of graph suitable for continuous quantitative data is the box-and-whisker plot. Values are plotted against the vertical axis.

The main features of a box-and-whisker diagram are based around a line that is parallel to the vertical axis of the graph. Around the centre of the plot there is a rectangle that is divided into two by a horizontal line. This middle line corresponds to the median value of the variable, with the upper and lower horizontal sides of the rectangle representing the upper and lower quartiles of the distribution respectively (these three quantities are defined below).

Vertical whiskers extend from the horizontal edges of the rectangle in both directions; these represent the range of other non-extreme values. Any extreme values, known as outliers, are shown as small circles beyond the limits of the whiskers. Unfortunately, there is no convention as to what constitutes an outlier so a subjective decision may be required. 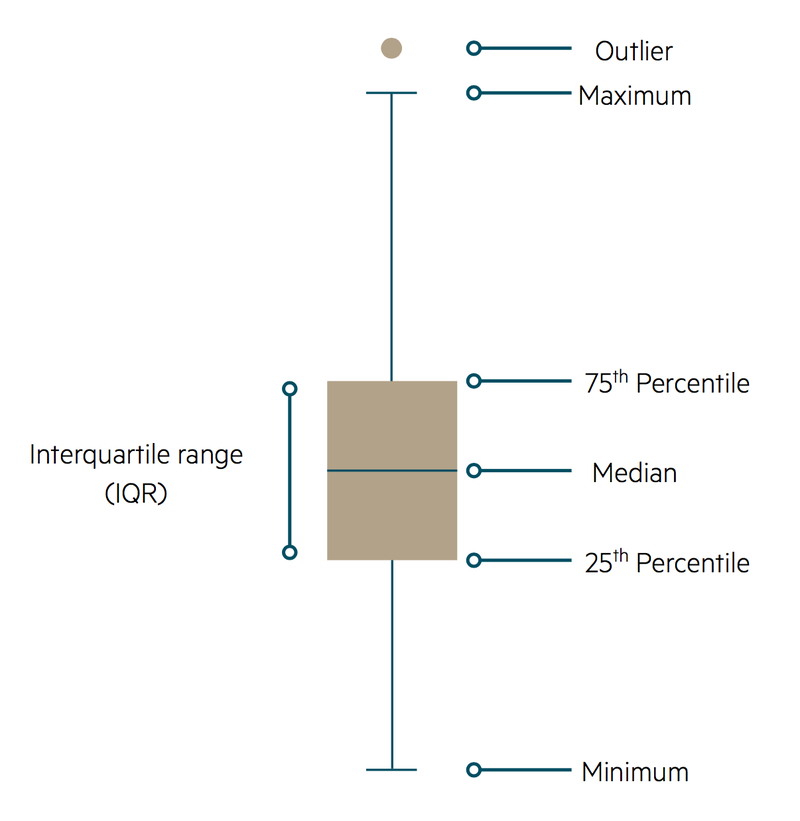 The methods described above can be extended to contrast two or more groups within a sample. For example, the size of mechanical valves implanted in heart surgery can be compared for male and female patients by constructing two bar-charts.

If two continuous variables are being compared, such as height and weight, a scatter diagram can be drawn using a two-dimensional plot.

Each member of the sample (each child in a group of young people) can be marked on the scatter diagram with a plotted symbol located using that individual’s height and weight values. 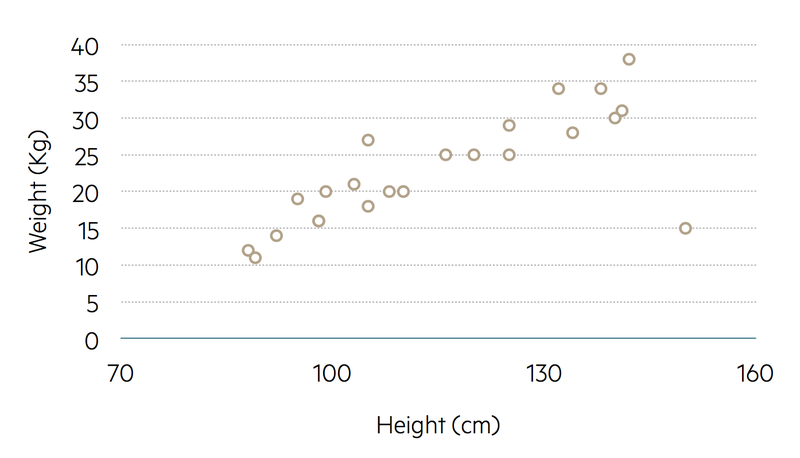 Trends over time can be illustrated as line plots. For instance, the number of cases of measles in the UK for consecutive years can be shown as points with the numbers represented by the vertical axis, the base set at zero, and the years indicated along the horizontal axis. Adjacent points are joined together by straight lines to highlight trends. 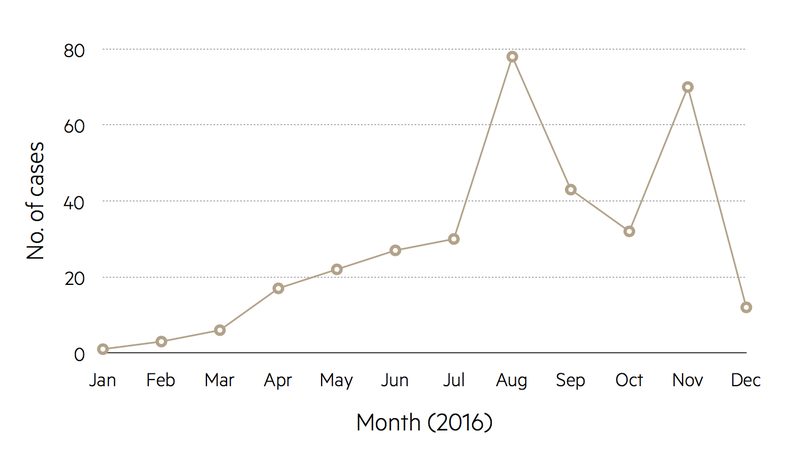 It is common to encounter graphs that have been drawn in misleading ways.

For instance, in a graph of trends over time the base of the vertical axis may correspond to a non-zero number in order to give a magnified impression of the size of any changes.

Avoid plotting mean values of groups as bar-charts; this is inappropriate as these charts have been designed for percentages and numbers of observations. In the medical literature, a handle is often attached to the top of each bar in order to give an indication of the variation of the observations within each group, although the way in which the variation has been measured is often not explained.

Using a ploy similar to the non-zero origin that can be found in time trend graphs, bar-charts may be presented with a broken vertical axis. This effectively removes a middle section of the axis in order to inflate differences between the bar heights.

In the media, pie-charts are often given a three-dimensional representation, which is thought to be more eye catching than the traditional circle. However, this method of presentation can create an optical illusion whereby the sectors in the lower region of the resulting ellipse appear magnified and those in the upper region appear contracted.

It is important not only to illustrate data graphically but also to summarise the main features using straightforward arithmetic.

An impression of the size of a typical value from a distribution may be found by calculating an average. There are three main types: the mean, the median, and the mode.

The mean is obtained by summing the values. This total is then divided by the size of the sample.

The median is the middle observation when the values are ordered in terms of size. If the number of observations is even, the mean of the middle pair is calculated.

The mode is found from a frequency count of the values recorded and is the most common value.

The variability of the observations is summarised using a measure of spread. Methods include the range, the interquartile range, the variance, and the standard deviation.

The variance is found by subtracting the mean from each observation, squaring each of these differences, summing them, and dividing the total by the sample size minus one.

Outliers can have a considerable impact on some types of average and measures of spread.

The mean can be inflated by a single extremely large value, along with the variance and standard deviation. The median and interquartile range are only influenced by outliers if they form a substantial fraction of the whole sample.

For example, in the lecture example on the number of prior diagnoses in a group of outpatients (observations 1, 1, 3, 5, 9, 1, 1, 4, and 2) suppose that the largest value is mistyped as 18. This error has no effect on the median or mode but the mean increases from 3 to 4. The interquartile range is unaffected but the variance increases from 7.25 to 29.75, with the standard deviation doubling in size.

By definition, the range is highly susceptible to outliers (it changes from 8 to 17 in the previous example) and it tends to increase as the sample size becomes larger.

The shape of distribution should be checked in terms of the values away from the central region (or the tails of the distribution).

For this introductory discussion it is assumed that the distribution has only one peak. Variables can be symmetrical (as with adult weight in some populations), positively skewed having a few extremely high values and a long tail pointing in the positive direction (e.g. adult alcohol consumption) or negatively skewed by a few extremely low values with a long tail pointing in the negative direction (e.g. length of gestation for live births).

Other distributions that are encountered include those with more than one peak (e.g. the blood glucose measurements in mmol/L for a mixed group of normal and diabetic individuals) and U-shaped distributions for which observations are less likely to occur in the central portion of the distribution than towards the edges (e.g. months of employment during the last year for which the most likely responses from outpatients are 12 or 0).

We'd love to hear your feedback on our Data presentation notes.