Deductions about the characteristics of a population can be made using a representative sample drawn from the population.

This procedure starts with a statement regarding the population and information from the sample is used to decide whether or not there is enough evidence to conclude that this statement might be false.

The initial statement about the population (the null hypothesis) is very specific.

For the case of a single sample it needs to describe the population, introduce the characteristic under study, include a statistical measure of interest (e.g. the mean) and propose an assumed value for this measure.

For instance, in a community study of systolic blood pressure an appropriate null hypothesis might be:

The assessment is carried out using what is known as a ‘test statistic’.

If the sample consists of just one group and the characteristic of interest is the mean of a continuous variable such as systolic blood pressure, an appropriate test statistic is obtained using the one-sample t-test.

Once the test statistic has been calculated from the sample, it is necessary to work out the probability of obtaining a test statistic value of this size or greater were the null hypothesis to be true.

This probability is called the P-value for the hypothesis test.

For the one-sample t-test, the P-value is the probability of obtaining a sample mean at least as divergent as the one in the study (relative to its standard error) from the assumed population mean. If the observed scenario is unlikely then there is evidence against the null hypothesis. Rarely, the P-value is equal to 1. In this situation the sample mean is equal to the population mean.

The smaller the P-value, the stronger is the evidence against the null hypothesis. This evidence should be described as strong, moderate, weak, etc., leaving the reader or audience to decide whether or not the null hypothesis is plausible. This goes against the long tradition in medical research of concluding that a null hypothesis should be rejected because the P-value is less than 0.05 and otherwise accepted. In exploratory studies, P-values just above 0.05 can be useful in identifying leads for further research.

The standard error of the sample mean can be used to calculate a range of plausible values for the population mean.

The value of 1.96 in the calculation of the confidence interval arises because to a good degree of approximation the standard error follows a Normal distribution and 95% of such a distribution lies within 1.96 standard deviations from the mean. 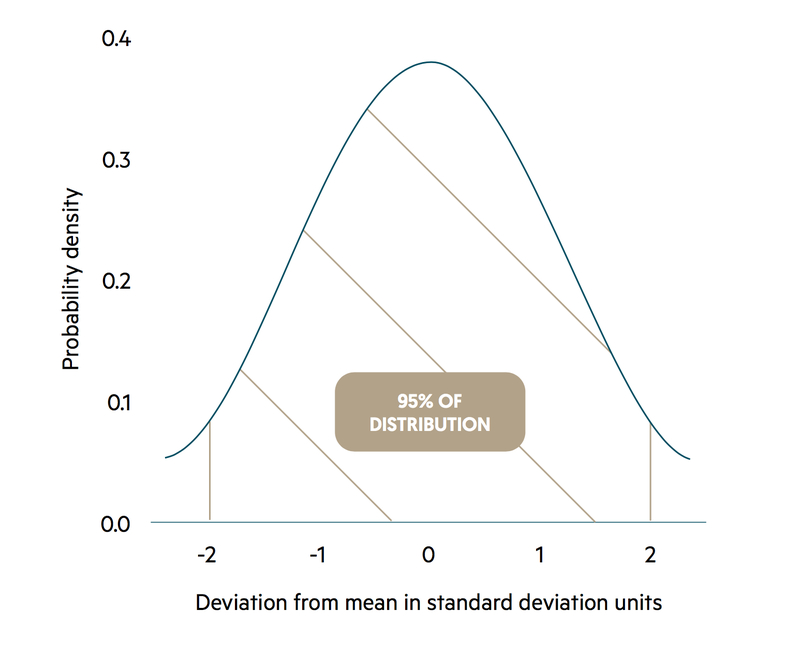 Various assumptions need to be made when hypothesis testing is carried out.

For the one-sample t-test, the sample should be representative of the population; if this is not so it is difficult to take account of the sample bias even using sophisticated statistical methods of analysis.

The measurements in the sample are taken to be independent of each other. If the values of some observations are influenced by those of the remainder more advanced statistical techniques for correlated data are required. In addition, observations should be Normally distributed in the population. For instance, populations with a highly skewed distribution should not be subjected to this test. If any of these assumptions are not met there is a risk of obtaining misleading P-values.

If the strength of evidence against a null hypothesis gives a P-value of less than 0.05, the null hypothesis value is implausible and not contained within the 95% confidence interval. This type of finding is often described as being of statistical significance.

An issue that is often overlooked in hypothesis testing is that of clinical importance.

The 95% confidence interval for a finding that has statistical significance may contain points that are so close to the null hypothesis value that the difference is unimportant from a clinical aspect. The minimum difference to be taken as clinically important should be stated prior to the hypothesis testing taking place. For a blood pressure study this minimum difference might be 5 or 10 mm Hg. In order for a finding to trigger changes in management, all points within the 95% confidence interval should indicate a difference from the null hypothesis value that is of clinical importance.

Suppose that for the community study of systolic blood pressure with the null hypothesis “In the population of adults living in this community, the mean systolic blood pressure is equal to 120 mm Hg” a minimum difference of 5 mm Hg is considered to be of clinical importance. In other words, mean SBP values indicating a clinically important difference are either no more than 115 or no less than 125 mm Hg.

Statistically significant finding. The null hypothesis value (120) is not within the confidence interval. Some values (e.g. 114) represent a difference of clinical importance.

This finding is not of statistical significance. The null hypothesis value (120) is contained within the confidence interval. No difference is of clinical importance.

Other applications of hypothesis testing

These notes are just a brief, introductory look at hypothesis testing and only considers the case of a continuous variable for one sample.

Hypothesis testing can be extended to many more contexts including the analysis of two or more groups, binary and ordered variables, and associations between continuous variables.

We'd love to hear your feedback on our Hypothesis testing notes.