DKA is a severe metabolic complication of diabetes. It is typically seen in those with T1DM as a presenting feature, in patients with poor control or intercurrent illness.

The condition is characterised by a biochemical triad of hyperglycaemia, ketonaemia and acidosis.

DKA represents an acute hyperglycaemic complication of diabetes that is common among type 1 diabetic patients.

The condition is being increasingly recognised in type 2 diabetes mellitus. This is discussed in more detail in 'unusual presentations'.

It is suspected that 4% of patients with T1DM develop DKA each year and up to 14% of diabetes related hospital admissions are the result of DKA.

DKA is a metabolic disorder, which is characterised by hyperglycaemia, ketonaemia and acidosis that is a consequence of absolute or relative insulin deficiency.

The lack of insulin means the body is unable to utilise glucose. This leads to accumulation of glucose within the blood resulting in hyperglycaemia. As glucose cannot be used there is an increase in hepatic glucose production through the breakdown of glycogen stores (glycogenolysis) and increased formation of glucose from other substrates (gluconeogenesis).

This is coupled with an increase in counter-regulatory hormone release (e.g. cortisol, glucagon, growth hormone), which exacerbates the hyperglycaemia and drives the production of alternative energy sources.

The lack of utility of glucose leads to the break down of fats (lipolysis) that increases serum free fatty acids. Fatty acids can be used as an alternative energy source through ketogenesis. 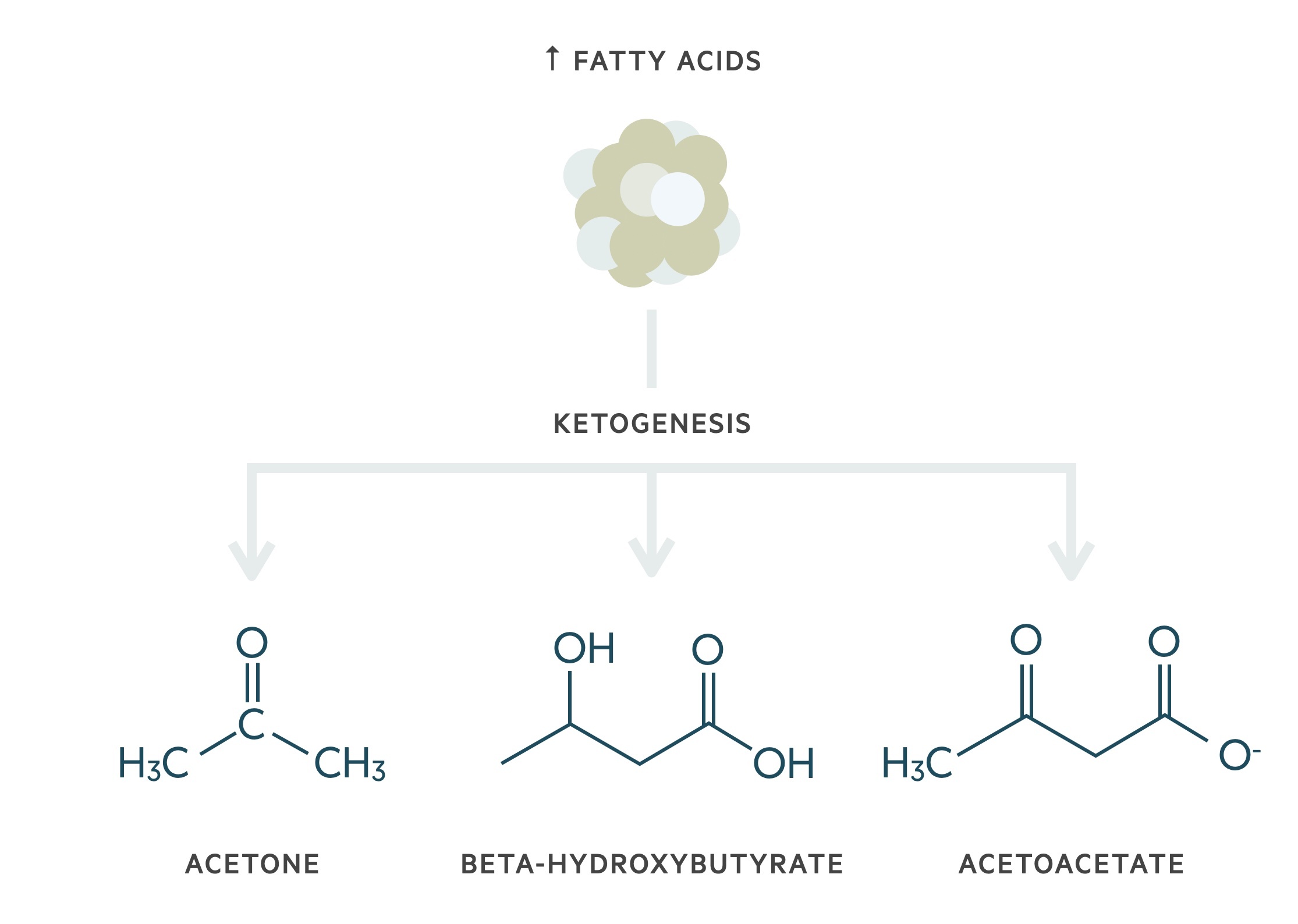 As DKA progresses, the raised plasma glucose leads to osmotic diuresis and profound hypovolaemia that is exacerbated by vomiting. This can lead to major electrolyte derangements, reduced consciousness and eventually death if not managed urgently.

In most cases of DKA, there is an underlying precipitant in patients with a pre-existing diagnosis of diabetes.

It is essential to manage the diabetic emergency, but also to consider the underlying precipitant and manage this appropriately (e.g. antibiotics for infection).

The main precipitants of DKA are listed:

These typical symptoms may be accompanied by generalised features of malaise, nausea, vomiting and abdominal pain. As DKA progresses, patients become more systemically unwell with dehydration, confusion, and reduced GCS. 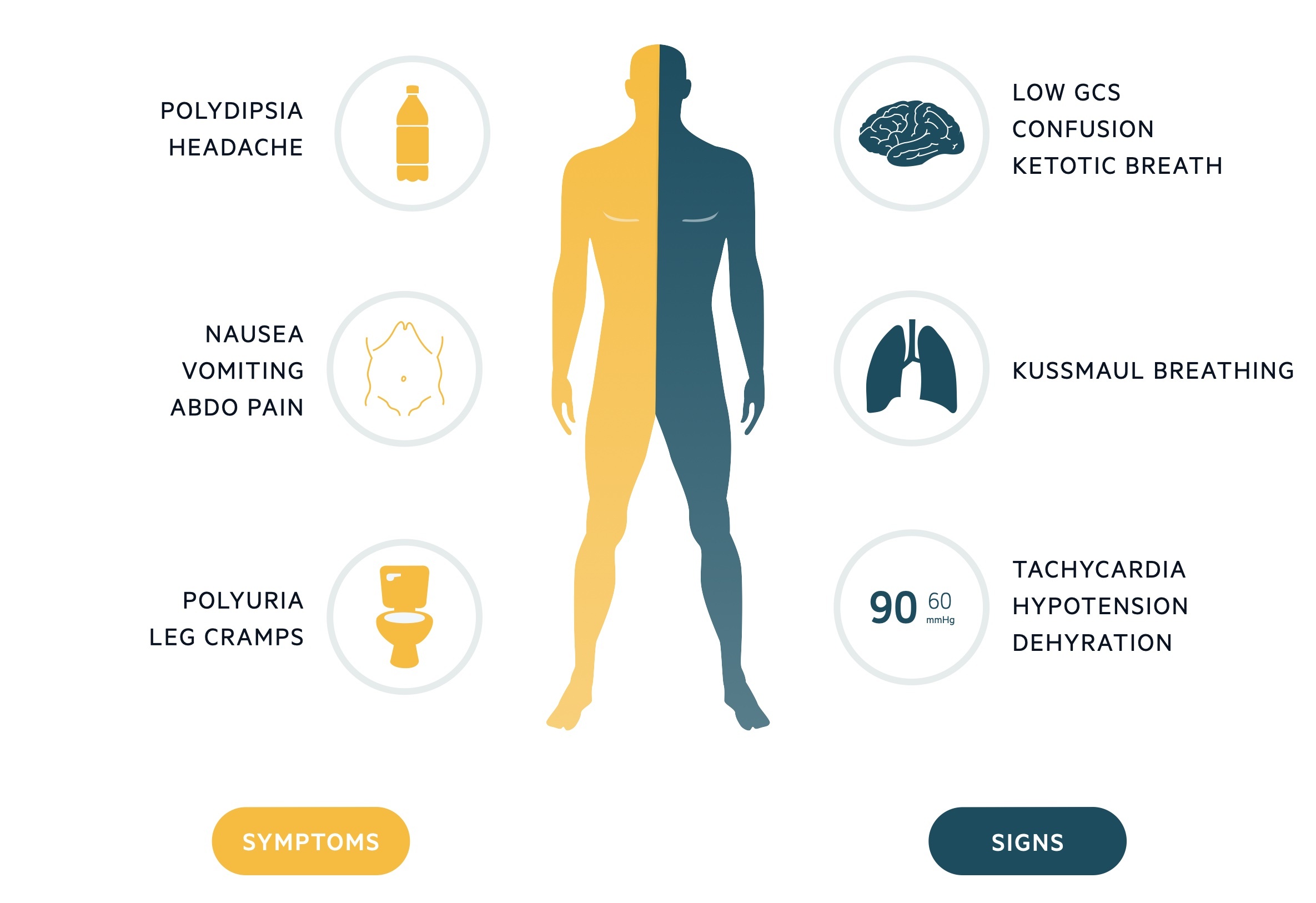 The diagnosis of DKA is based on identification of the biochemical triad of hyperglycaemia, acidaemia and ketonaemia/ketonuria. 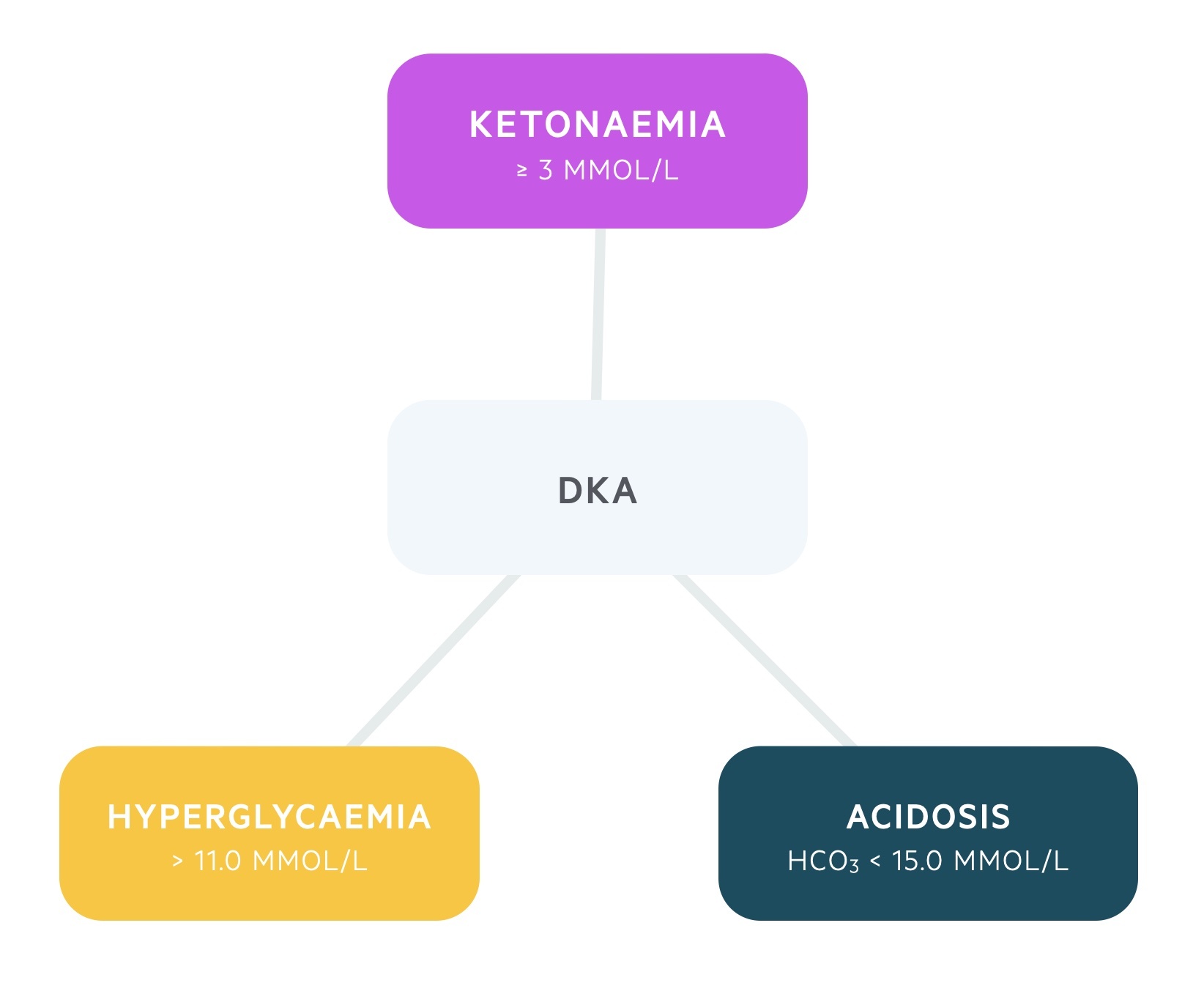 Some patients with T2DM are at risk of diabetic ketoacidosis. These patients are referred to as ketosis-prone. African Caribbean patients are particularly at risk. Therefore, acutely unwell patients with type 2 diabetes should always be assessed for DKA.

DKA is not always associated with hyperglycaemia. When DKA develops with normal or near-normal blood glucose levels it is referred to as euglycaemic DKA. This is important to recognise because it is associated with a higher mortality.

Euglycaemic DKA may occur in the presence of exhausted glycogen stores in the liver (e.g. protracted vomiting, alcohol use, malnutrition). An increasingly recognised cause of euglycaemic DKA is from the new anti-diabetic class sodium-glucose co-transporter-2 inhibitors (SGLT-2 inhibitors).

The main investigations in the management of DKA include a laboratory glucose, venous/arterial blood gas and a ketone measurement (blood/urine).

Nevertheless, a full set of investigations are essential to properly assess for any DKA precipitants and monitor for complications (e.g. electrolyte derangements, acute kidney injury).

Further investigations may be arranged depending upon the clinical presentation.

Patients presenting with DKA have a significant fluid deficit, are acidotic with high ketone and blood glucose levels, and high risk of electrolyte derangements.

The joint British diabetes society for inpatient care released excellent guidelines on the management of DKA.

The main goals of management in a patient presenting with DKA are:

All patients should undergo a clinical assessment with respect to airway (A), breathing (B), and circulation (C).

Important aspects of the clinical assessment include a formal Glasgow coma score (GCS) and a full set of observations (HR, Temp, RR, BP, Sats). Concurrently, a series of initial investigations and interventions should be completed, which include:

Assessment of severity is important to establish the level of care that patients require for ongoing management.

One or more of the following parameters would warrant referral to a high-dependency unit (level 2 care).

Fluid status should be assessed based on clinical and biochemical measurements. A urinary catheter may be required for more accurate monitoring.

The initial fluid of choice is 0.9% normal saline and patients should be given this immediately, especially in the presence of hypotension (Systolic BP < 90 mmHg). If the systolic BP does not improve with fluid (i.e > 90 mmHg), senior help should be sought and another cause for hypotension considered. The debate between 0.9% sodium chloride or another balanced crystalloid is ongoing in research.

A typical fluid regime for an average patient presenting with DKA would be a 1 litre of normal saline over 1 hour, followed by 2 litres each over 2 hours, followed by 2 litres each over 4 hours. At all times potassium replacement should be considered and patients fluid status regularly assessed for ongoing intravenous fluid needs. The typical water deficit in a patient with DKA is 100 ml/kg (i.e. up to 7 litres in a 70 kg person!).

Patients with DKA will be started on an intravenous insulin regime, which will decrease plasma potassium levels leading to profound hypokalaemia.

Potassium levels should be closely monitored with early replacement often needed depending on the levels. Regular monitoring of potassium is essential throughout the treatment of DKA.

The serum potassium concentration should be maintained between 4.0 and 5.5 mmol/L.

Patients with established DKA need to be started on a fixed rate intravenous insulin infusion (FRIII) immediately, which is based on the patients weight (can be estimated).

Patients should be given a fixed infusion at 0.1 units/kg/hr. This means a 60 kg female will get an hourly rate of 6 units. The infusion is set up by mixing 50 units of short-acting insulin (ACTRAPID®) with 50 mls of 0.9% normal saline.

When blood glucose levels fall < 14 mmol/L, intravenous 10% dextrose should be administered at a rate of 125 ml/hour (i.e. 8-hourly bag). Importantly, this is run alongside both the FRIII and sodium chloride (i.e. it does not replace the sodium chloride). At the same time, you should consider reducing the rate of FRIII to 0.05 units/kg/hr to prevent hypoglycaemia and hypokalaemia.

Patients should be monitored regularly to assess for an adequate fall in ketones, glucose and rise in bicarbonate with normalisation of acid-base balance.

In those with severe DKA, they should have continual cardiac and saturation monitoring. An accurate fluid balance should be kept and if urine output is not possible due to anuria or incontinence then a catheter should be considered.

A number of metabolic treatment targets should be achieved during the management of DKA.

Blood ketones are the most useful markers. In the absence of blood ketone monitoring, bicarbonate and blood glucose can be used.

The FRIII should be continued until the ketone measurement is less than 0.6 mmol/L, venous pH over 7.3 and/or venous bicarbonate over 18 mmol/L. If the blood glucose level falls below 14.0 mmol/L then 10% dextrose should be given at approximately 125ml/hr (8 hour bag) alongside the FRIII and 0.9% normal saline +/- potassium chloride.

The specialist diabetic team should always be informed regarding a presentation of DKA. Ideally, they should assess the patient within 24 hours.

It has been shown that early involvement of the specialist diabetic team is associated with reduced length of stay and better patient experience.

Mortality has improved significantly in the last 20 years to < 1%. However, DKA still accounts for a high mortality in developing countries and non-hospitalised patients.

In the adult population, common causes of mortality include hypokalaemia, adult-respiratory distress syndrome (ARDS) and co-morbid conditions such as sepsis or myocardial infarction. Other complications include cerebral oedema (more common in paediatric population) and hypoglycaemia.

Potassium disturbances are a significant issue in DKA. Severe dehydration can lead to pre-renal acute kidney injury and transmembrane shifts in potassium due to the ketoacidosis. These collectively lead to hyperkalaemia. However, on initiation of insulin therapy plasma potassium concentrations dramatically fall leading to dangerous hypokalaemia.

We'd love to hear your feedback on our DKA notes.