Phaeochromocytoma refers to a catecholamine-secreting tumour of chromaffin cells.

Chromaffin cells are a type of neuroendocrine cell that are involved in the formation and release of catecholamines, which include noradrenaline, adrenaline and dopamine. These hormones have an important role in the sympathetic nervous system as part of the ‘fight-or-flight’ response.

Chromaffin cells are predominantly found in the adrenal medulla, but also in the sympathetic paravertebral ganglia of the thorax, abdomen, and pelvis.

Catecholamine-secreting tumours may arise from the adrenal medulla or from the sympathetic ganglia and are known as phaeochromocytomas and paragangliomas respectively:

Phaeochromocytomas and paragangliomas are rare tumours.

Phaeochromocytomas account for < 0.2% of patients with hypertension. They most commonly present in the 4th or 5th decade, but at a younger age in hereditary cases. Around 10% of cases occur in children.

The majority of tumours are sporadic, but up to 40% have a hereditary component.

Phaeochromocytomas may be sporadic or hereditary.

Patients with sporadic phaechromocytoma are more likely to be older and present with classic features. This is because screening for phaeochromocytoma is more well established in hereditary cases. Several susceptibility genes have been identified in phaeochromocytoma. As such, genetic testing should be considered in all patients, usually following resection.

Up to 40% of phaeochromocytomas may have a hereditary component. Three familial syndromes are strongly associated with these catecholamine-secreting tumours:

The clinical manifestations of phaeochromocytomas are due to excess secretion of catecholamines from tumours leading to either paroxysmal or continuous symptoms. Catecholamines have wide-ranging effects as part of the normal sympathetic nervous system through activation of alpha and beta-adrenergic receptors. These effects include:

The release of catecholamines from these tumours is not regulated and can be precipitated by direct pressure, medications or changes in tumour blood flow. The major concern is a sudden dramatic release in catecholamines leading to a 'hypertensive' or 'phaeochromocytoma' crisis.

There are some key characteristics about phaeochromocytomas and paragangliomas.

Phaeochromocytomas are characterised by a triad of episodic headache, sweating and tachycardia.

Classically, clinical features of phaeochromocytoma are paroxysmal. However, some patients may have more persistent symptoms, while others are asymptomatic. Important to remember that even patients with essential hypertension may have paroxysmal symptoms.

NOTE: symptoms may resemble those of a panic attack (e.g. nausea, palpitations, dyspnoea, sweating). Many patients worked up for phaeochromocytoma meet the criteria for panic disorder.

Patients may develop severe symptoms relating to a hypertensive crisis, also known as a phaeochromocytoma crisis. If severe, it may lead to circulatory collapse.

All patients with a family history or hereditary condition associated with phaeochromocytoma need screening.

Metanephrines are a metabolite of adrenaline that may be measured in the urine or plasma. The choice between measuring plasma levels or urine levels depends on the centre and pre-test probability. Urinary measurements are generally used for low risk patients and plasma measurements for those at high-risk.

A 24-hour urinary collection for urinary metanephrines is an appropriate investigation for those with possible sporadic disease based on clinical suspicion. It may be completed twice on non-consecutive days.

Plasma metanephrines and catecholamines have a high negative predictive value. This means patients without raised levels are high unlikely to have a phaechromocytoma. However, it does result in false positives. As such, to prevent unnecessary investigations and potential surgery, the test is reserved for high risk patients. 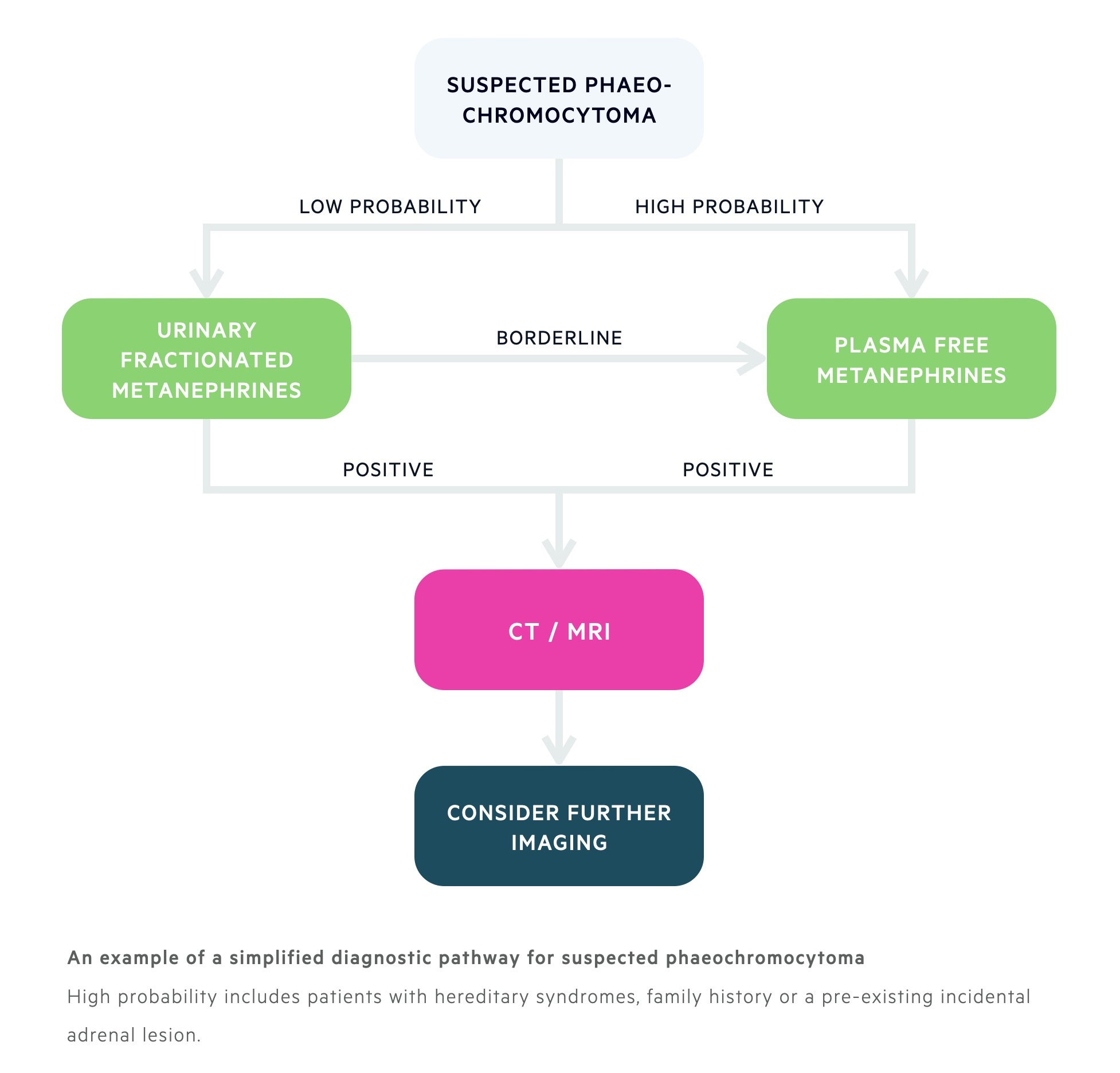 Following confirmation of elevated catecholamines, radiological investigations are used to locate the tumour.

As discussed, ~95% of tumours are found in the abdomen and pelvis. Therefore, cross-sectional imaging usually focuses on these areas in the initial work-up.

Imaging should generally only follow suggestive biochemical testing. Of course an incidental finding on imaging may have prompted investigations in the first place.

Computed tomography (CT) or magnetic resonance imaging (MRI) of the abdomen and pelvis can both be completed as part of initial radiological investigations.

Both imaging modalities are highly sensitive (up to 100%) but only 70% specific due to the high rate of incidentalomas. An incidentaloma refers to an adrenal lesion >1 cm that is discovered incidentally on imaging. The problem with these lesions is that it is unclear whether they are malignant, functioning or the cause of symptoms. Further tests are usually required.

In patients with negative CT/MRI (and phaeochromocytoma still suspected) or those with suspected extra-adrenal disease / metastatic spread, further imaging may be arranged.

The definitive management of a phaeochromocytoma is surgical resection following medical optimisation.

Prior to surgery, it is important to optimise blood pressure control due to the risk of hypertensive crisis from anaesthesia and/or surgical manipulation.

The most effective method to control blood pressure is combined alpha and beta-adrenergic blockade. Beta-blockers should never be used as single therapy as it can precipitate hypertensive crisis from unopposed alpha-adrenergic stimulation. This is because peripheral beta-receptors have a vasodilatory effect.

Patients are encouraged to have a high sodium diet due to the volume loss with excessive catecholamines and increased risk of orthostatic hypotension with alpha-blockers.

Adrenalectomy is the surgery of choice in phaeochromocytoma, this can be completed laparoscopically or open depending on patient factors and local expertise.

In sporadic cases the whole gland may be removed. In hereditary cases, due to the risk of bilateral involvement partial adrenalectomy should be considered. If both adrenal glands need to be removed, without cortical-sparing techniques, patients will require lifelong glucocorticoid and mineralocorticoid replacement.

Paragangliomas may require special approaches depending on the location of the tumour.

There are limited therapeutic options for patients with metastatic phaeochromocytoma. Options may include surgical resection combined with radioactive therapy (e.g. radioactive iodine attached to MIBG) that is taken up by adrenal tissue.

We'd love to hear your feedback on our Phaeochromocytoma notes.