Primary aldosteronism is a condition caused by an excess of the adrenal hormone aldosterone independent of the renin-angiotensin-aldosterone axis.

The hallmarks of disease are hypertension and hypokalaemia - though hypokalaemia is often absent. Primary aldosteronism is increasingly being recognised as a common and under-diagnosed cause of secondary hypertension. Today prevalence is thought to be between 5-15% of patients with hypertension.

Disease is caused by one of a number of subtypes:

Treatment depends on the underlying cause and whether it is unilateral or bilateral. It may involve surgery (adrenalectomy) or aldosterone antagonists (e.g. spironolactone).

The adrenal gland is divided into two functionally distinct components, an outer cortex and an inner medulla.

Also termed the 'suprarenal' gland, the adrenal gland sits atop each kidney. The shape can distinguish laterality with the right gland a pyramidal shape whilst the left is more semilunar.

The adrenal cortex is the outermost aspect of the adrenal gland. It is composed of three layers:

The innermost aspect of the adrenal gland, composed of a single layer. Responsible for the production of three hormones:

Under normal conditions aldosterone release is primarily controlled by the renin-angiotensin system.

Renin, a proteolytic enzyme, is released by granular cells of the juxtaglomerular apparatus in response to:

Angiotensin-converting enzyme (ACE), found primarily in the vascular endothelium of the lungs, cleaves angiotensin I to give angiotensin II.

Aldosterone is a mineralocorticoid released from the zona glomerulosa of the adrenal cortex. It is released in response to:

Its primary action is to increase the number of epithelial sodium channels in the distal tubule. This results in sodium and water reabsorption and potassium excretion.

Hypersecretion of aldosterone leads to sodium and water retention and potassium wasting.

As described above aldosterone acts on the kidneys, primarily the collecting duct where it increases the number of sodium channels in principal cells. This results in sodium reabsorption followed by water, potassium is excreted as it moves down the electrical gradient.

In the presence of aldosterone excess the human body begins to retain sodium and water. The increase in volume and changes to systemic vascular resistance lead to hypertension. Hypokalaemia may result in 15-30% of cases from the increase in potassium excretion.

The volume expansion prompted by increased water reabsorption results in an 'escape' phenomenon. This is a diuresis that occurs in response to the water and sodium retention caused by raised aldosterone. The exact mechanisms are unclear but appear to involve:

In the vast majority of cases primary aldosteronism is caused by adrenal adenomas or adrenal hyperplasia.

Primary aldosteronism was first described by Conn in the 1950's in patients with adrenal adenomas (hence the alternate name Conn’s syndrome). The autonomous adenoma produces aldosterone independent of normal mechanisms.

Once thought to be the most common cause of primary aldosteronism, it is implicated in around 30-40% of cases.

This is caused by hyperplasia only affecting one gland. Far less common than the bilateral form and may be treated more like an aldosterone-producing adenoma.

Adrenal carcinoma is a rare cause.

Frequently asymptomatic, clinical features of primary aldosteronism are those of hypokalaemia (30%) and hypertension.

Hypertension is generally asymptomatic but present in the vast majority of patients with primary aldosteronism. Long-standing hypertension may result in end-organ damage:

Hypokalaemia affects around 10-30% of patients with primary aldosteronism. It is normally asymptomatic but may present with non-specific signs and symptoms including: 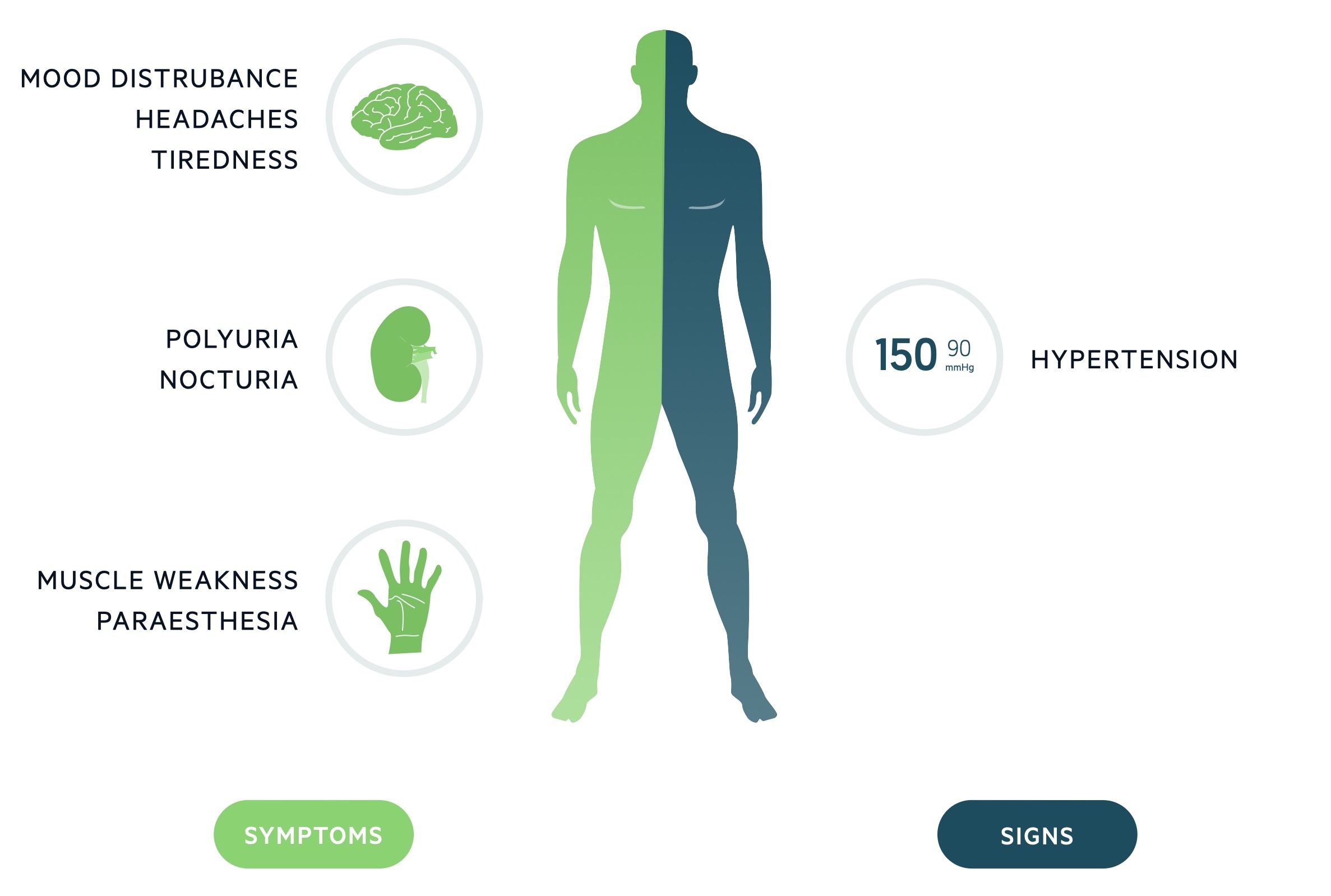 Hypertension, hypokalaemia and metabolic alkalosis are the classical findings.

Hypertension is essentially universal in primary aldosteronism. All other features are variably present:

NOTE: Primary aldosteronism has been described with hypokalaemia but an absence of hypertension - this is normally in young women.

Patients should be tested where a secondary cause for hypertension is suspected. This includes: 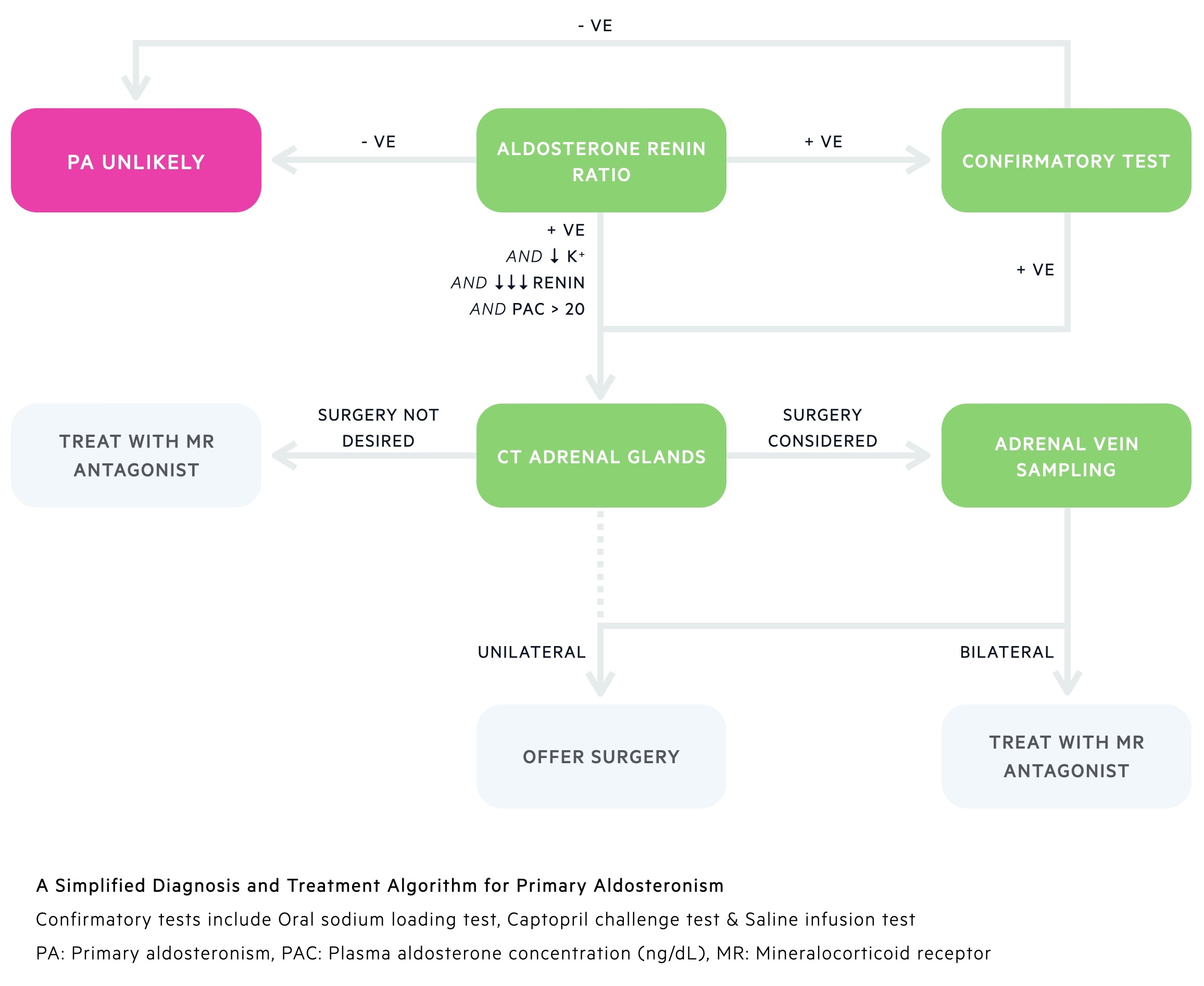 The aldosterone:renin ratio (ARR) is used as a screen in those with suspected primary aldosteronism. It compares serum levels of aldosterone and renin. A raised ratio should prompt further investigation.

Those with a raised ARR will normally require confirmatory testing. In patients with positive ARR screening and spontaneous hypokalaemia, undetectable renin and a plasma aldosterone concentration > 20ng/dL confirmatory tests may not be needed.

Where indicated a number of tests are available:

A CT of the adrenal glands is the next line investigation in people with positive ARR/confirmatory testing. It may provide evidence of an adrenal adenoma or hyperplasia. CT can be misleading and it is at times difficult to distinguish adenomas from non-functioning incidentalomas or even hyperplasia based disease.

The gold-standard to confirm laterality is adrenal vein sampling - it has an excellent ability to differentiate between bilateral and unilateral disease. It is however an invasive and technically difficult procedure with risk of bleeding, thromboembolism and contrast reactions. It should not be performed in patients unwilling or not fit for surgery.

Investigations and management are guided by expert MDTs. They may consider avoiding AVS and proceeding to unilateral adrenalectomy in select patients - typically young patients with frank primary aldosteronism and findings consistent with an adenoma on CT.

Management of primary aldosteronism involves both surgical and medical modalities.

This includes patients with aldosterone-producing adenomas and unilateral hyperplasia. In those whom are fit and willing, unilateral adrenalectomy offers cure. This may be either laparoscopic or open depending on patient factors and local expertise.

Medical management with mineralocorticoid receptor antagonists (e.g. spironolactone) can be used as a bridge to surgery or as definitive management in those not for surgical intervention.

Other antihypertensives may be added.

We'd love to hear your feedback on our Primary aldosteronism notes.