Achalasia is a rare motility disorder that affects the oesophagus.

Achalasia is a primary motility disorder of the oesophagus that is characterised by failure to relax of the lower oesophageal sphincter. The cardinal symptom of achalasia is dysphagia (difficulty swallowing), which is typically to both solids and liquids. Symptoms are usually slowly progressive and it may be months or years before a patient seeks medical attention.

Achalasia is a rare disorder.

The global prevalence of achalasia is estimated at 1.8-12.6 per 100,000 persons per year. The peak onset is between 30-60 years of age and there is no sex predilection.

The cause of primary (idiopathic) achalasia is unknown.

The cause of achalasia can be broadly divided into primary and secondary:

In primary achalasia, the exact cause is unknown but there is evidence of denervation of the neurons that are involved in coordinating oesophageal contraction. These nerves are located within the myenteric plexus within the muscular layer of the oesophagus.

On histology, there is a decreased number of ganglion cells in the myenteric plexus with inflammatory cells infiltrated around remaining ganglion cells. Inhibitory neurons are preferentially affected that are needed for muscle relaxation through release of nitric oxide and vasoactive intestinal peptide. This leads to failed relaxation of the lower oesophageal sphincter (LOS) as well as failed peristalsis of the oesophageal body (i.e. aperistalsis). The inability to relax the LOS combined with abnormal motility impairs oesophageal emptying and leads to dysphagia and regurgitation of undigested food.

Many conditions can cause an increase in pressure at the lower oesophageal sphincter, which prevents normal relaxation and opening. This can give the appearance of achalasia but the cause is anything other than primary deneration.

Secondary achalasia is commonly due to gastrointestinal malignancy with invasion into and around the gastro-oesophageal junction. Other causes may include:

The cardinal symptom of achalasia is dysphagia.

Achalasia may present insidiously over many years. The cardinal feature is dysphagia (difficulty swallowing), usually to both solids and liquids, with the regurgitation of undigested food and/or saliva.

Motility disorders, such as achalasia, typically present with dysphagia to both solids and liquids. A physical obstruction (e.g. cancer) typically occurs with solids first and progresses to liquids as the narrowing becomes tighter.

Clinical examination is typically normal, but there may be features of weight loss and observed regurgitation/vomiting events after oral intake.

The diagnosis of achalasia is confirmed on manometry.

Achalasia is usually suspected from the clinical history because of dysphagia to solids and liquids in a young person. Other times to consider achalasia include recurrent regurgitation or heart burn unresponsive to proton pump inhibitor. As heartburn is common in achalasia, patients are often misdiagnosed with gastro-oesophageal reflux disease.

Patients with suspected achalasia usually undergo a series of investigations including:

A formal diagnosis of achalasia can be made on high-resolution manometry and subsequently divided into subtypes.

An OGD is important to exclude a structural cause of dysphagia such as cancer. Achalasia may be suggested by resistance to passing through the gastro-oesophageal junction.

A barium swallow involves drinking a solution of barium followed by completing a series of x-rays to observe how it passes through the oropharynx, oesophagus and across the gastro-oesophageal junction. Barium absorbs x-rays so is easily seen on plain radiographs.

Features suggestive of achalasia include: 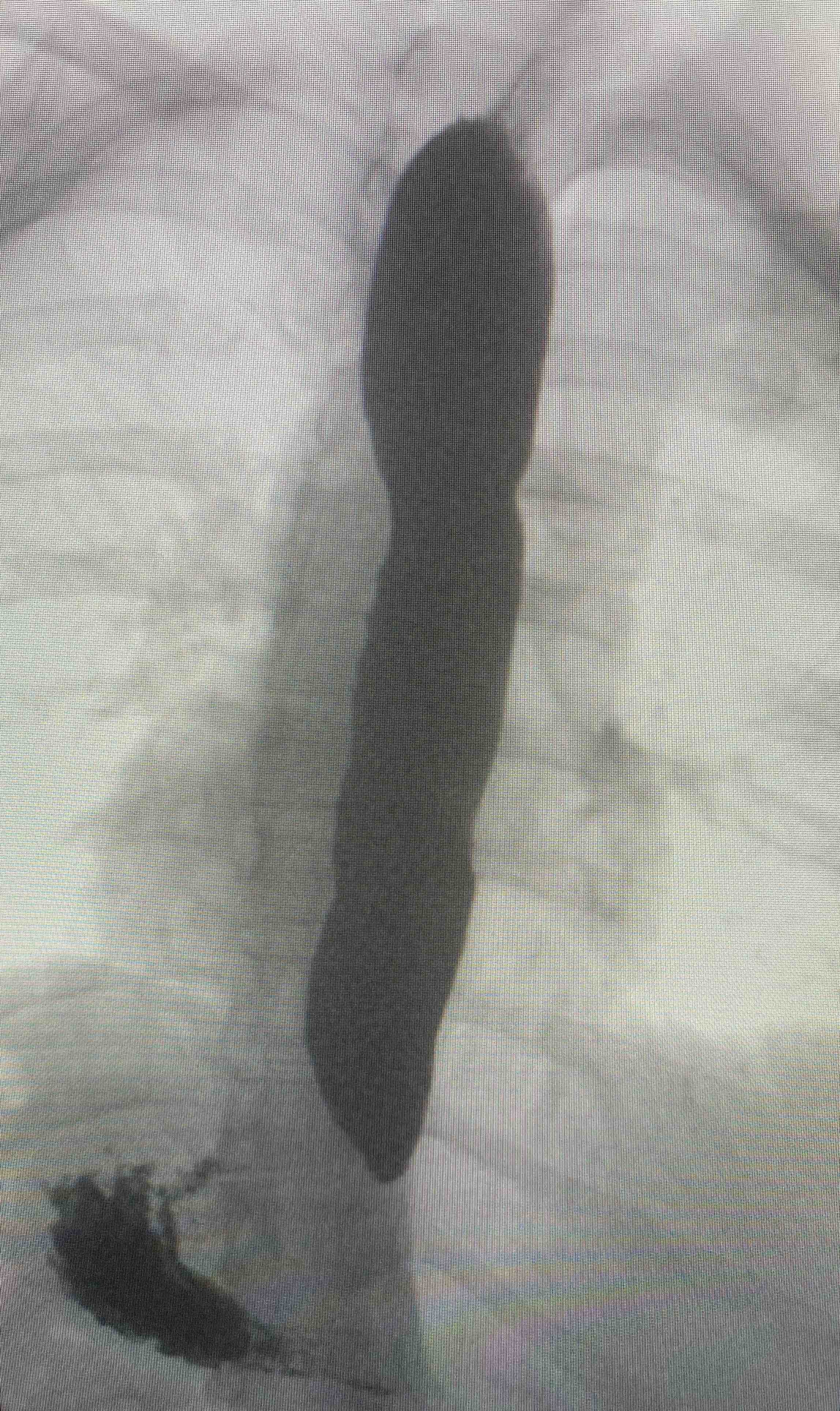 Barium swallow showing pooling of barium in the oesophagus

The patient is asked to swallow water and eat a small amount of food to assess the transit of food and liquid. There is a specific protocol to follow by the gastrointestinal physiologists. The data from the sensors is converted into an oesophageal pressure topography.

Using high-resolution manometry, achalasia can be differentiated into three subtypes: 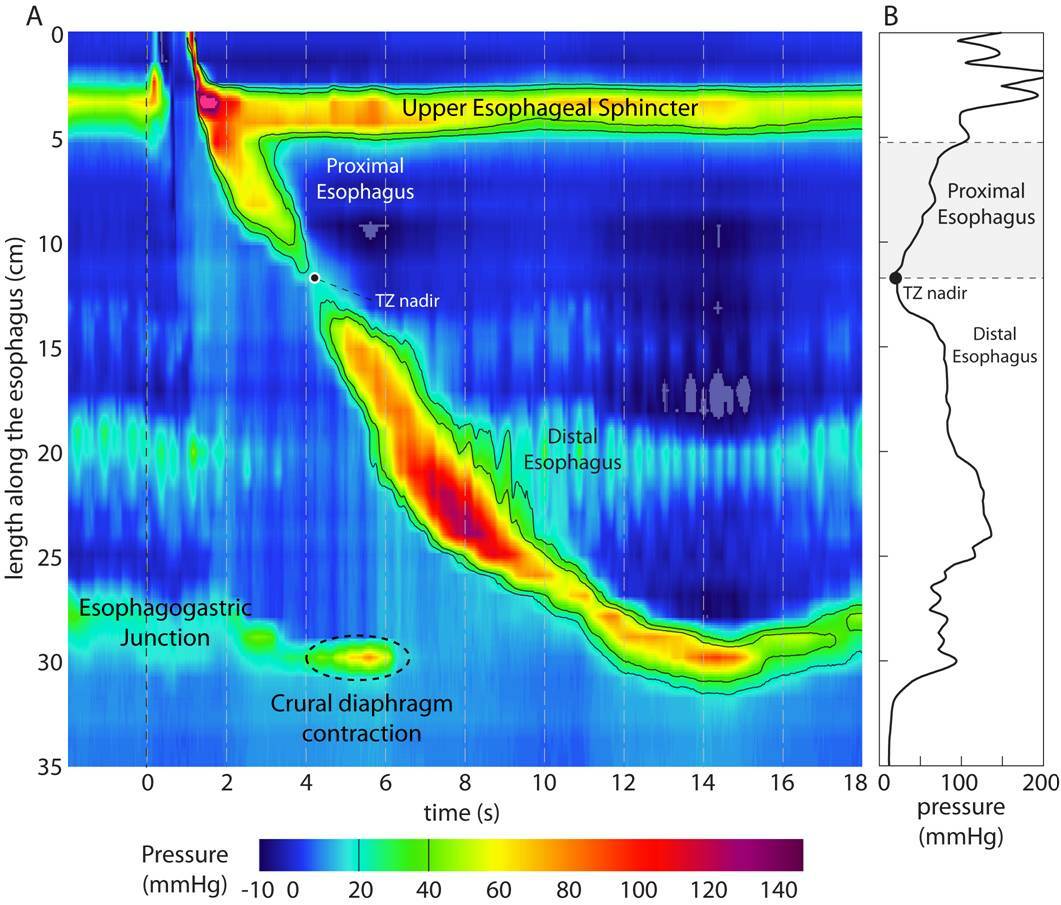 The diagnosis of oesophageal motility disorders is based on the Chicago classification.

The three major treatment options for achalasia include POEM, dilatation and myotomy.

Treatment of achalasia involves improving the lower oesophageal opening, which can be completed by disturbing the muscle fibres. There are three major treatment options for people with achalasia:

This involves insertion of a balloon down an endoscope, which is then blown up within the lower oesophageal sphincter. This leads to tearing of the muscle fibres. The most serious complication is perforation (~1.9%). Symptom relief can be achieved in the vast majority of patients.

POEM is a technique that was developed in Japan and it involves making a cut within the oesophageal mucosa and then dissecting down the inner circular muscle layer towards the cardia of the stomach. This disrupts the muscular layer with a success rate >90%. Reflux post-POEM is one of the major complications of the procedure.

This involves surgically cutting the muscle fibres of the lower oesophageal sphincter (i.e. myotomy) without disturbing the mucosa. It was traditionally completed through a thoracotomy excision (i.e. open-surgery) known as a Heller myotomy. However, minimally-invasive laparoscopic techniques are now available.

A fundoplication (wrapping part of the stomach around the lower oesophageal sphincter) is commonly performed during the procedure to prevent the complication of reflux.

Patients who are unfit to undergo definitive intervention may have botox injections at the time of endoscopy. The botulinum toxin is a potent inhibitor of acetylcholine release at the presynaptic junction that prevents contraction.

Oral pharmacological therapies may include calcium channel blockers and nitrates but these have limited efficacy.

Finally, for end stage achalasia (characterised by a massively dilated and tortuous oesophagus) that has failed previous intervention, an oesophagectomy can be considered (removal of the oesophagus) but this is a major operation with significant morbidity and mortality.

One of the major complications of achalasia is aspiration pneumonia.

Aspiration is a major risk of achalasia because the oesophagus is unable to clear luminal content leading to regurgitation of fluid and aspirates entering the airway. In addition, the risk of squamous cell carcinoma of the oesophagus is significantly increased in patients with achalasia (1 per 300 patient years). However, at present there is no recommendation for routine endoscopic surveillance.

We'd love to hear your feedback on our Achalasia notes.