Coeliac disease is common among northern Europeans. Within the UK, the estimated prevalence is 1%. It is considered to be twice as common in females as in males.

The condition may present at any age; however a growing proportion of patients are diagnosed in older age. The presentation is varied, ranging from diarrhoea and bloating, to iron-deficiency anaemia or osteoporosis.

Coeliac disease develops due to intolerance to proteins called ‘prolamins’.

Gluten is a general term for the proteins found within wheat and other cereal grains. It is a complex mixture of many proteins, particularly gliadin and glutenin.

Gliadin is an example of a prolamin found within wheat. Other prolamins may be identified in other cereal grains including hordeins (barley) and secalins (rye). Prolamins possess high proline and glutamate content which makes them resistant to digestive gastric enzymes.

Ingestion of prolamins can result in immune-mediated damage of the intestinal mucosa. Mucosal damage reduces in severity moving distally towards the terminal ileum.

The development of sensitivity to dietary prolamins is thought to be multifactorial, and due to a complex interaction between prolamins and the patients' genetics, immune system and the environment.

Genetics play an important role in the development of coeliac disease. There is a strong association between coeliac disease and two type II human leukocyte antigens (HLAs):

HLA testing has a strong negative predictive value. This means an absence of the gene is strongly associated with not having the disease. However, having the gene does not mean patients will develop the disease (up to 25% of the general population have HLA-DQ2/HLA-DQ8). It is estimated that >99 percent of individuals with coeliac disease have one of both of these MHC molecules.

Type II HLA genes code for proteins important in the formation of the major histocompatibility complex (MHC) class II. These are found on T helper cells and professional antigen-presenting cells (e.g. dendritic cells). They are involved in the presentation of extracellular peptides (e.g. antigens) to the immune system. They are important in the activation of the adaptive immune system (e.g. B- and T-cell-mediated immunity).

Both the innate and adaptive immune systems are involved in the inappropriate response to dietary prolamins.

Activation of T helper cells leads to stimulation of B cells and the release of pro-inflammatory cytokines. The activation of the immune system leads to the recruitment of inflammatory cells in the lamina propria (infiltration) and subsequent hyperplasia in the crypts of Lieberkühn.

There is some suggestion that a number of environmental factors may be involved in the pathogenesis of coeliac disease.

Recurrent rotavirus infection infections during childhood increase the risk of developing the disease. Breastfeeding is thought to be protective.

Persistent inflammation of the intestinal mucosa leads to damage and failure of its normal absorptive functions.

Prolamins (e.g. gliadin) are ingested within the diet. These may cross the epithelial surface into the lamina propria. Here, the enzyme tissue transglutaminase is able to deaminate gliadin.

Deamination makes gliadin more immunogenic and it subsequently binds to antigen-presenting cells (APCs) of the innate immune system. Gliadin is then presented to T helper cells via the HLA molecules DQ2/DQ8.

Activated T helper cells secrete pro-inflammatory cytokines and activate B lymphocytes. The activation of B lymphocytes leads to the formation of auto-antibodies (e.g. anti-endomysial and anti-tissue transglutaminase).

Collective activation of both the innate and adaptive immune responses leads to chronic inflammation and damage to enterocytes, resulting in three classical features:

Clinical presentation is varied, ranging from diarrhoea and bloating, to iron-deficiency anaemia or osteoporosis.

However, some patients may present with non-specific symptoms (e.g. fatigue), whilst others may be asymptomatic. This variability and rather non-specific nature is reflected in the number of indications for testing for coeliac disease. 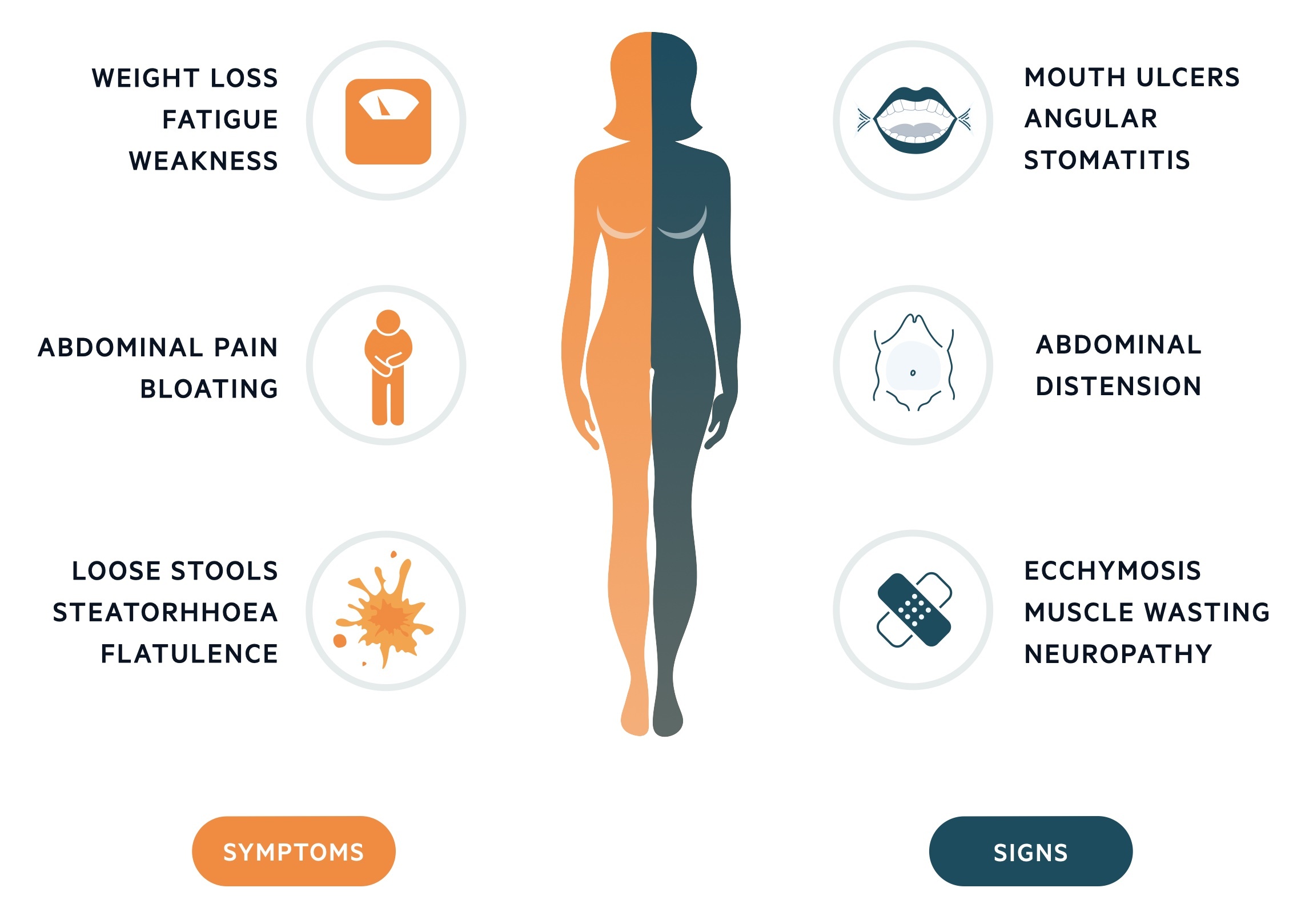 Extra-intestinal manifestations of coeliac disease occur as a secondary consequence of malabsorption.

Anaemia occurs in 10-15% of patients. Typically this is due to malabsorption of iron and folate. A such a mixed megaloblastic/microcytic picture may be seen. In severe disease affecting the ileum, B12 malabsorption may occur.

Multiple mechanisms are responsible for the osteoporosis seen in coeliac disease. Malabsorption of calcium and vitamin D deficiency contribute. Calcium may also be sequestered to poorly absorbed fatty acids.

Dermatitis herpetiformis is a blistering skin condition that is strongly associated with coeliac disease. The rash is intensely pruritic. It may be managed with dapsone and a gluten free diet.

Once a diagnosis of coeliac disease has been made, further investigations can be used to assess severity and monitor for the development of complications.

Upper GI endoscopy helps to confirm the diagnosis of coeliac disease (at least four biopsy specimens). Samples are taken from the second part of the duodenum and duodenal bulb. It can also be used to assess the response to treatment. 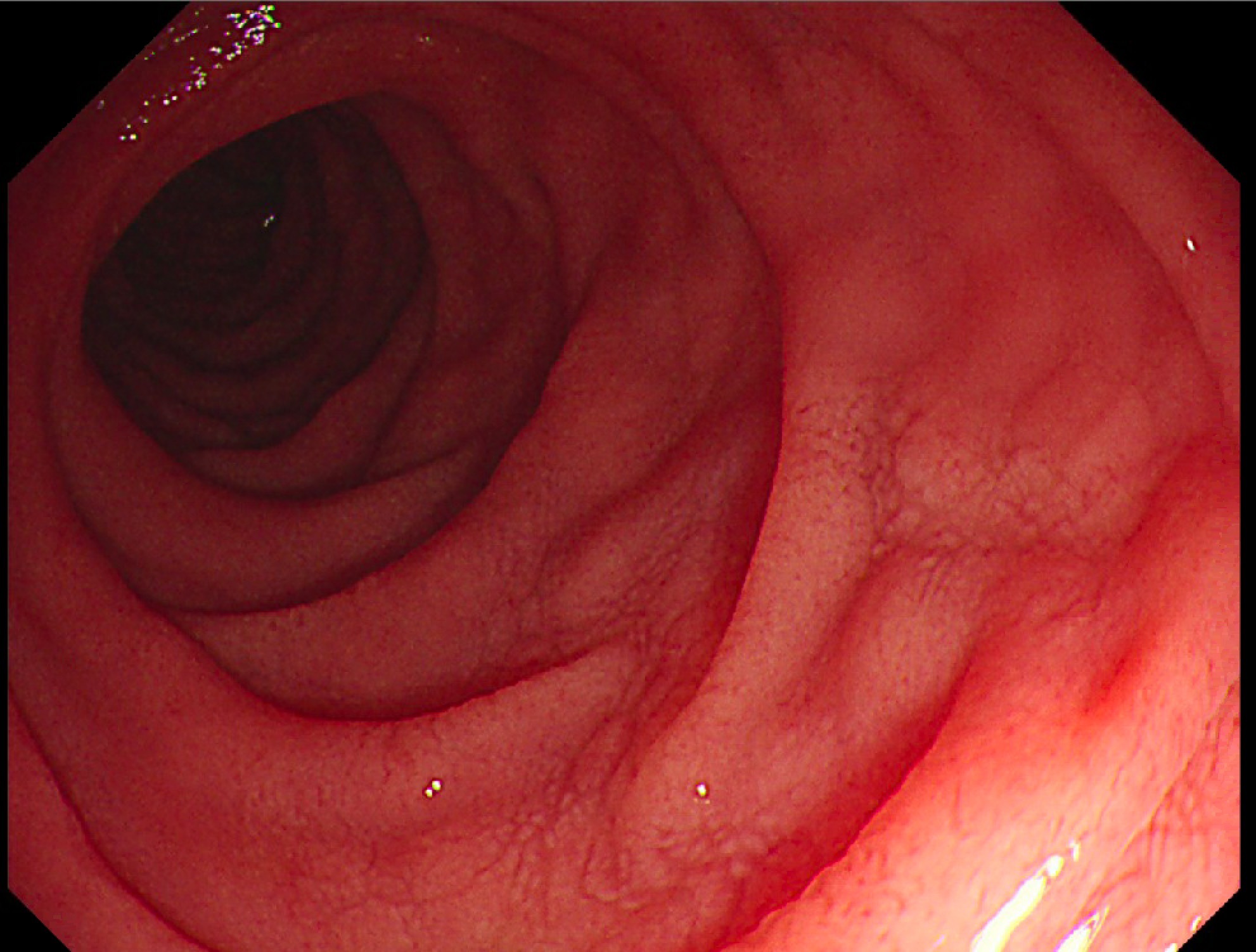 Endoscopic visualisation of the duodenum in a patient with coeliac disease

Diagnosis of coeliac disease is based on both serological and histological evidence of disease activity.

NICE recommends serological testing as a screen in a number of settings: 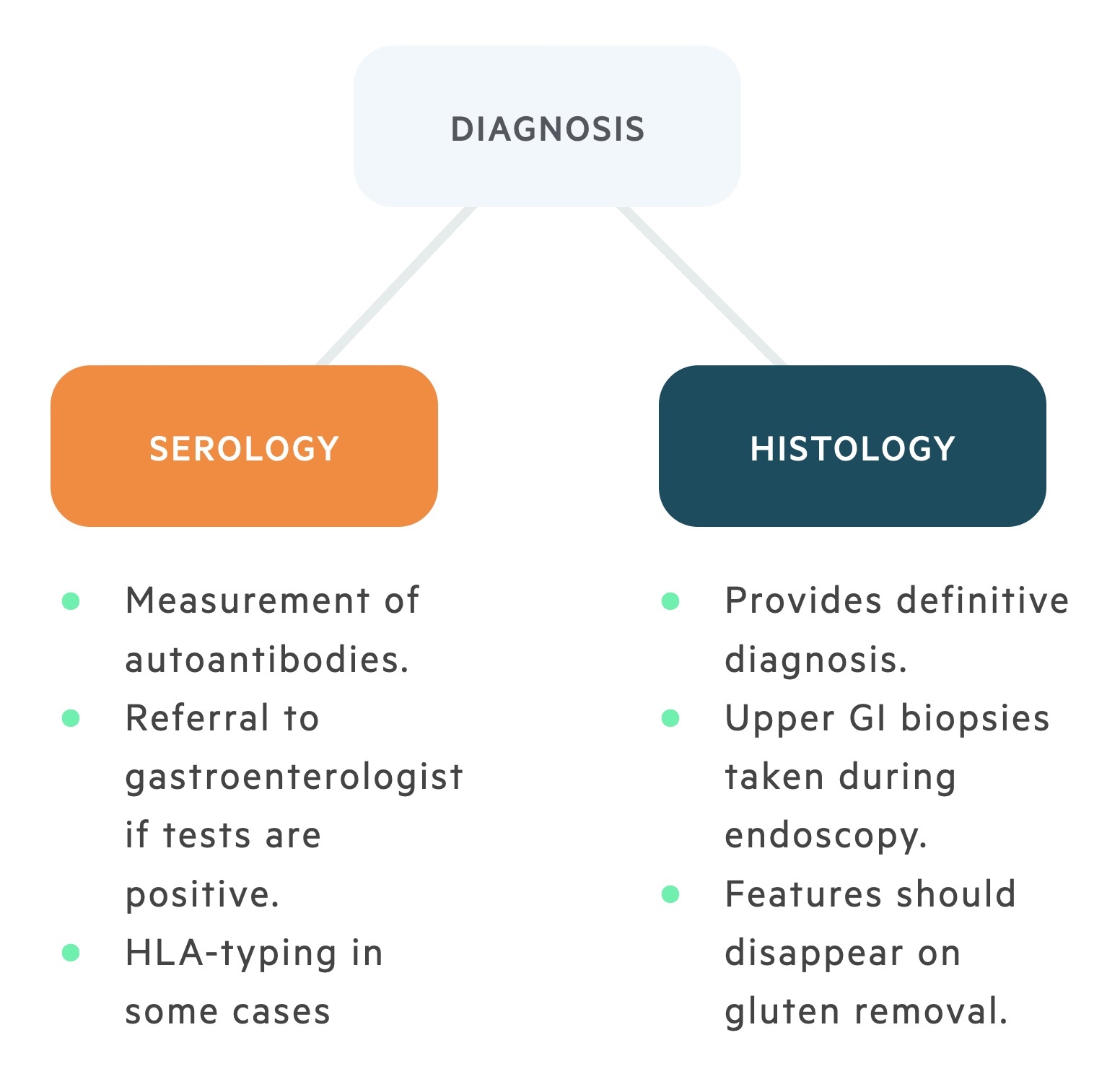 These serological markers have a sensitivity > 90%, however, they are not always both present. Typically, anti-tTGA is assessed first. Anti-EMA should be tested for if the initial anti-tTGA test result is equivocal.

Total IgA levels should be checked at the same time. IgA deficiency occurs in <1% of the population, but it occurs more commonly in patients with coeliac disease (2-3%). If IgA deficiency is found then tests specific for IgG anti-tTGA/anti-EMA are required. In addition, anti-gliadin (IgG) antibodies can be requested.

Those with a positive serological test can be referred for intestinal biopsy and histology.

With the limited access to endoscopy during the COVID-19 pandemic, the British Society of Gastroenterology released updated guidance on a 'non-biopsy' pathway for coeliac disease with specific characteristics (IgA tTG ≥10 x ULN, younger age, no ALARM symptoms).

In uncertain cases, HLA-typing can be completed to aid the diagnosis of coeliac disease.

Adherence to a gluten-free diet reverses both histological and serological markers of coeliac disease.

Due to long-term complications associated with coeliac disease, it is important patients adhere to a gluten-free diet even if they do not continue to experience any symptoms. The stringency of the gluten-free diet is variable depending on the extent to which patients are affected. There are numerous resources and support groups available to patients to help them achieve a long-term gluten-free diet.

An estimated 5% of patients with coeliac disease will not respond to a Gluten-free diet. In the majority of cases (>90%), this is due to inadvertant gluten ingestion.

Refractory coeliac disease is defined an persistent or recurrent malabsorptive symptoms and villous atrophy (on duodenal biopsies) despite adherence to a gluten free diet for at least 6-12 months.

It is important to exclude other causes of enteropathies and confirm the diagnosis of coeliac disease. Those with true refractory coeliac disease can be divdied into two groups based on immunological features on biopsy:

Treatment of refractory coeliac disease may be with steroids or immunodulating drugs. It is important to exclude lymphoma in type 2.

This is an IgA-mediated condition strongly associated with coeliac disease. Over 90% of patients with dermatitis herpetiformis have coeliac disease on biopsy.

Dermatitis herpetiformis is a blistering disease of the skin, which presents as an extremely itchy papulovesicular rash on the extensor surfaces. Subepidermal bullae are seen on histology with linear IgA deposits on dermal papillae. The diagnosis is based on IgA levels and skin biopsy. It is managed with dapsone.

EATCL is an uncommon, but significant, complication of coeliac disease. It should be suspected in any patient with ‘unresponsive’ coeliac disease or unexplained clinical features (e.g. loss of weight).

EATCL, a primary lymphoma of the GI tract, occurs due to chronic inflammation. It is associated with pain, obstruction, and may lead to perforation. The 5-year prognosis is poor.

We'd love to hear your feedback on our Coeliac disease notes.