Ulcerative colitis is a chronic, inflammatory disease characterised by a relapsing-remitting course affecting the gastrointestinal tract.

Though related, the two conditions have different pathologies, presentations and treatments. Whilst UC is a continuous inflammation of the mucosa starting in the rectum (in most cases) and limited to the colon, in CD transmural patchy inflammation is seen throughout the gastrointestinal tract. 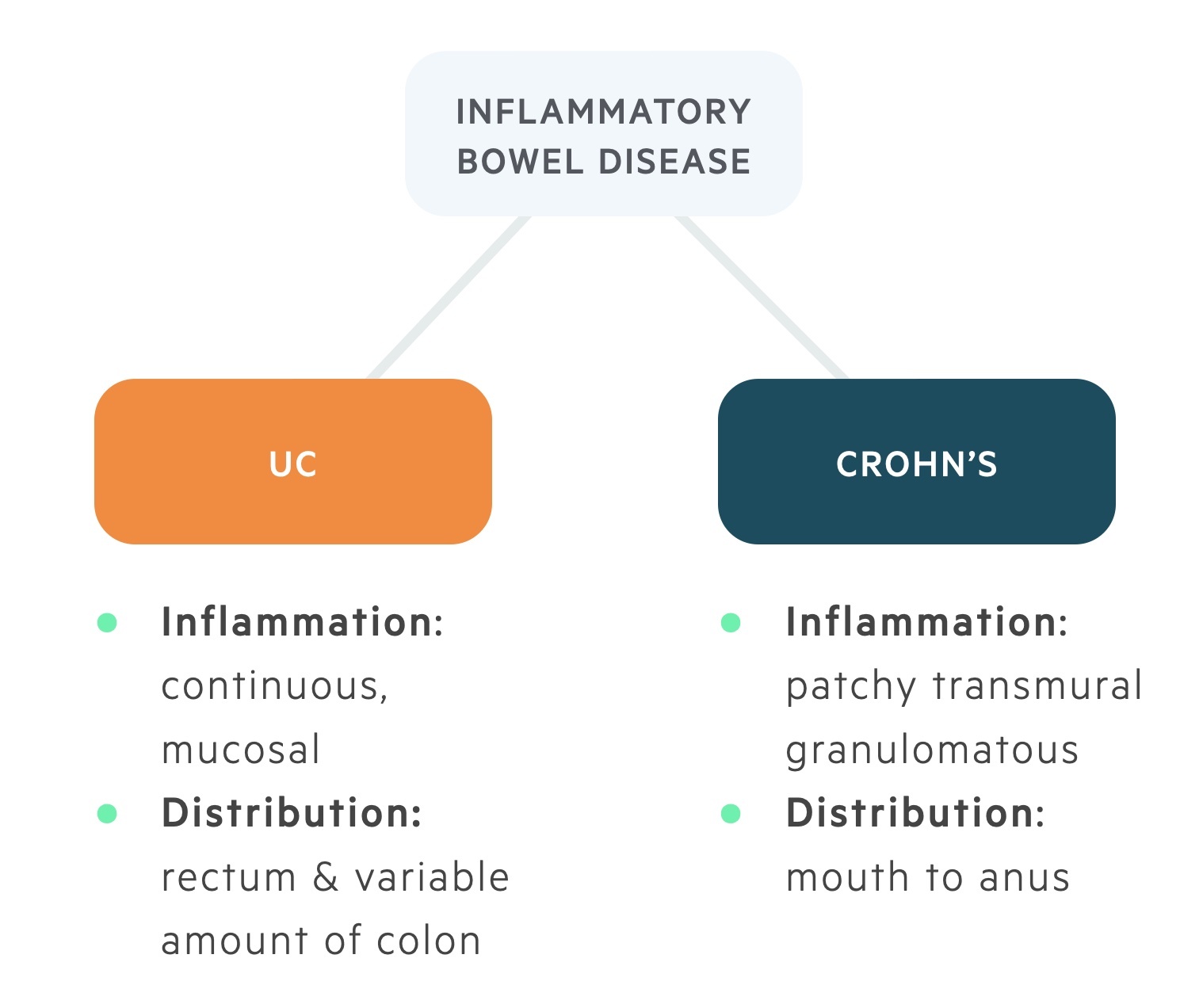 UC is a disease of the colonic mucosa, which has a relapsing-remitting course. It is characterised by inflammation of the mucosa, affecting the rectum (rectal sparing occurs but is rare) and may progress proximally through the colon. The terminal ileum may be affected ('backwash ileitis') in those with extensive colitis. 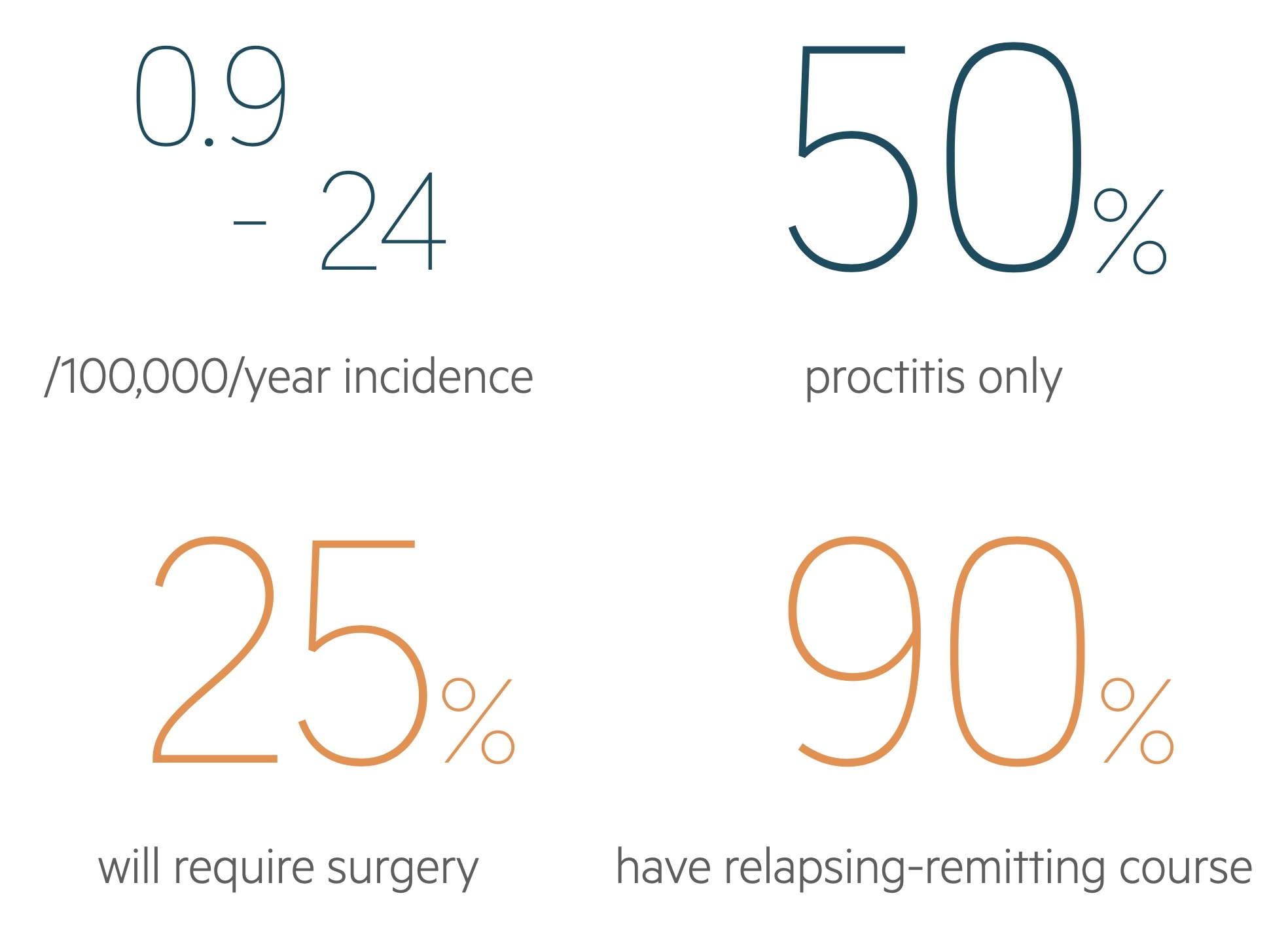 The precise aetiology of both UC and CD remains unknown.

The current theory is of an abnormal immunological response and/or increased reaction to commensal bacteria within a genetically susceptible individual. This theory is based around three core aetiological factors: immunity, genetics and the environment. 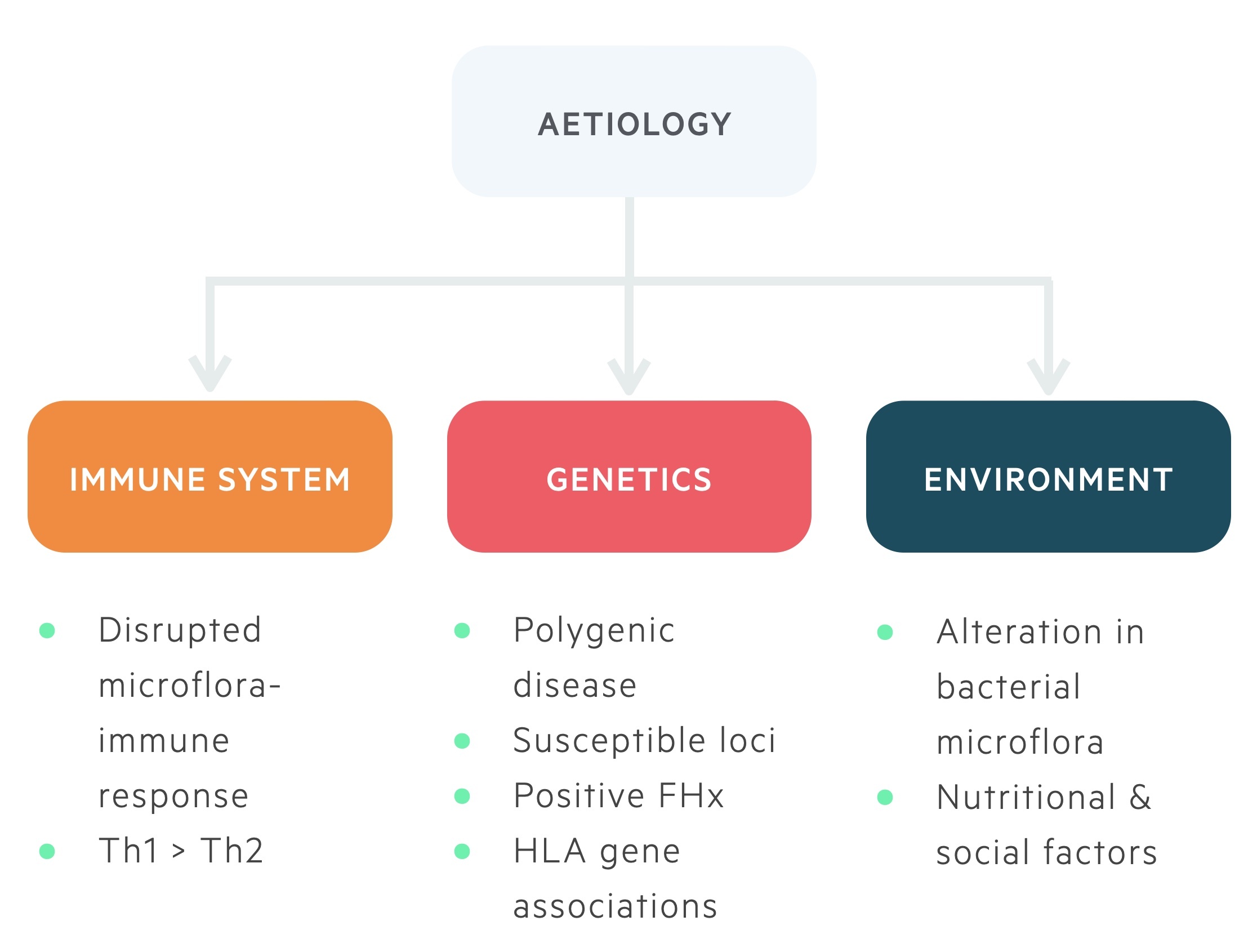 There is suggested to be an abnormal immunological response to intestinal microflora. There also seems to be a protective role in patients who have previously had an appendicectomy.

Ulcerative colitis is a polygenic disease (multiple susceptible genetic loci increase the likelihood of developing UC, but do not directly cause it). It is more common in certain populations (e.g. Jewish) and there is often a positive family history.

Smoking is protective in UC, whereas it is positively associated with CD. Numerous environmental factors are linked with UC; which include milk consumption, bacterial microflora alteration and medications (e.g. NSAIDs, OCP).

A number of pathophysiological changes occur due to inflammation of the colonic mucosa.

UC affects the rectum (proctitis) first and then extends proximally to involve more of the colon. The extent to which UC affects the colonic mucosa is variable among patients.

Most patients (50%) suffer from proctitis only, however, 1/3rd of these patients will go on to develop more proximal disease. Approximately 30% have left-sided disease and up to 20% have pancolitis.

Pancolitis refers to inflammation of the entire colon. Patients with pancolitis are at risk of developing backwash ileitis. This refers to reflux of colonic contents into the distal few centimetres of the ileum through the ileocaecal valve. Backwash ileitis can make distinction between UC and CD more difficult. 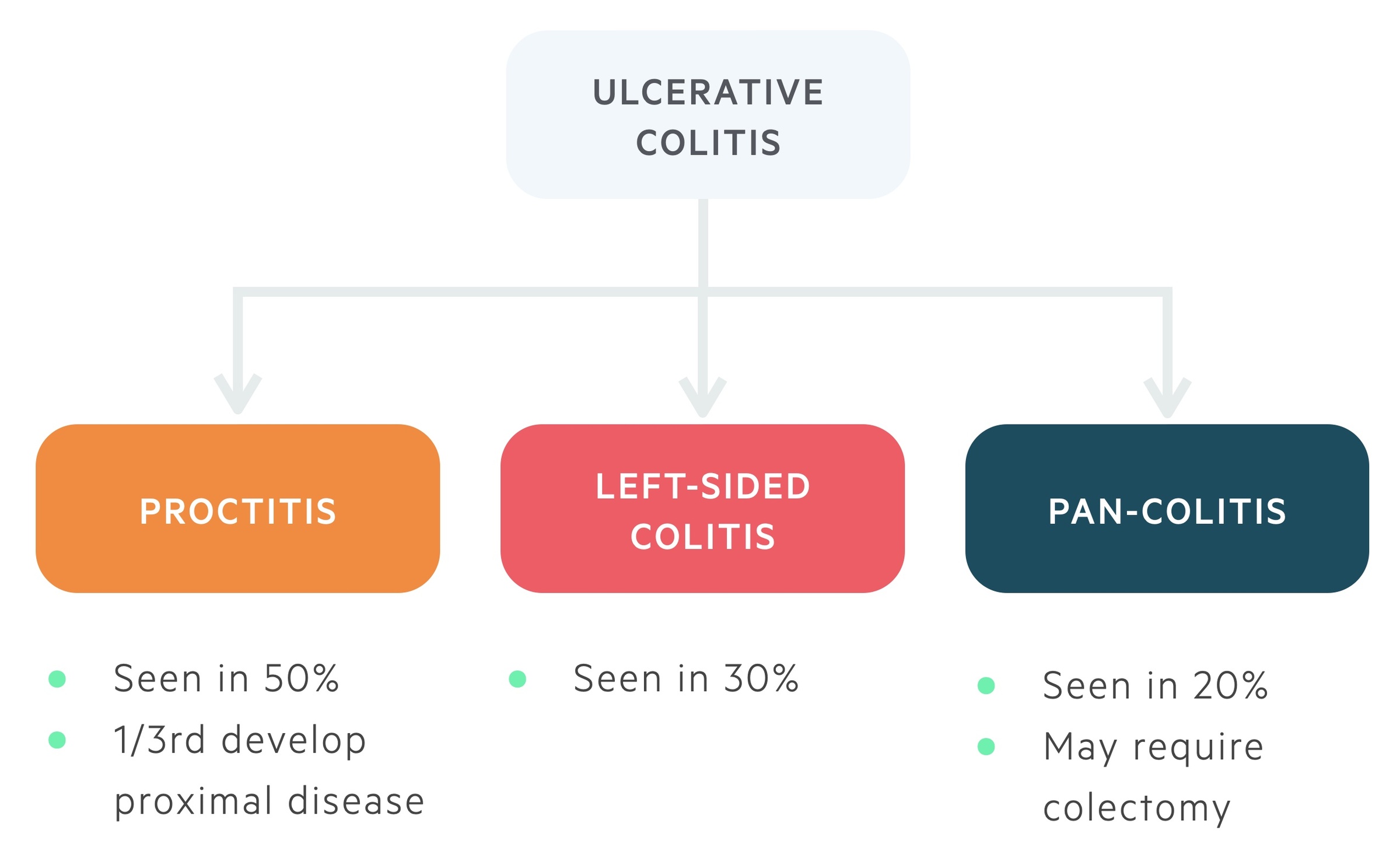 The changes that occur in UC can be described as macroscopic, which are seen during endoscopy or microscopic that are seen on histology.

Macroscopically there is evidence of continuous inflammation that extends proximally along the colon. The surface of the mucosa appears reddened and inflamed. The mucosa is also said to be easily friable to touch, and there may also be evidence of inflammatory polyps.

Microscopic changes seen in UC are predominantly alterations in crypt architecture with the development of crypt abscesses and goblet cell depletion. There is also increased inflammatory infiltration into the lamina propria, which is largely neutrophilic. 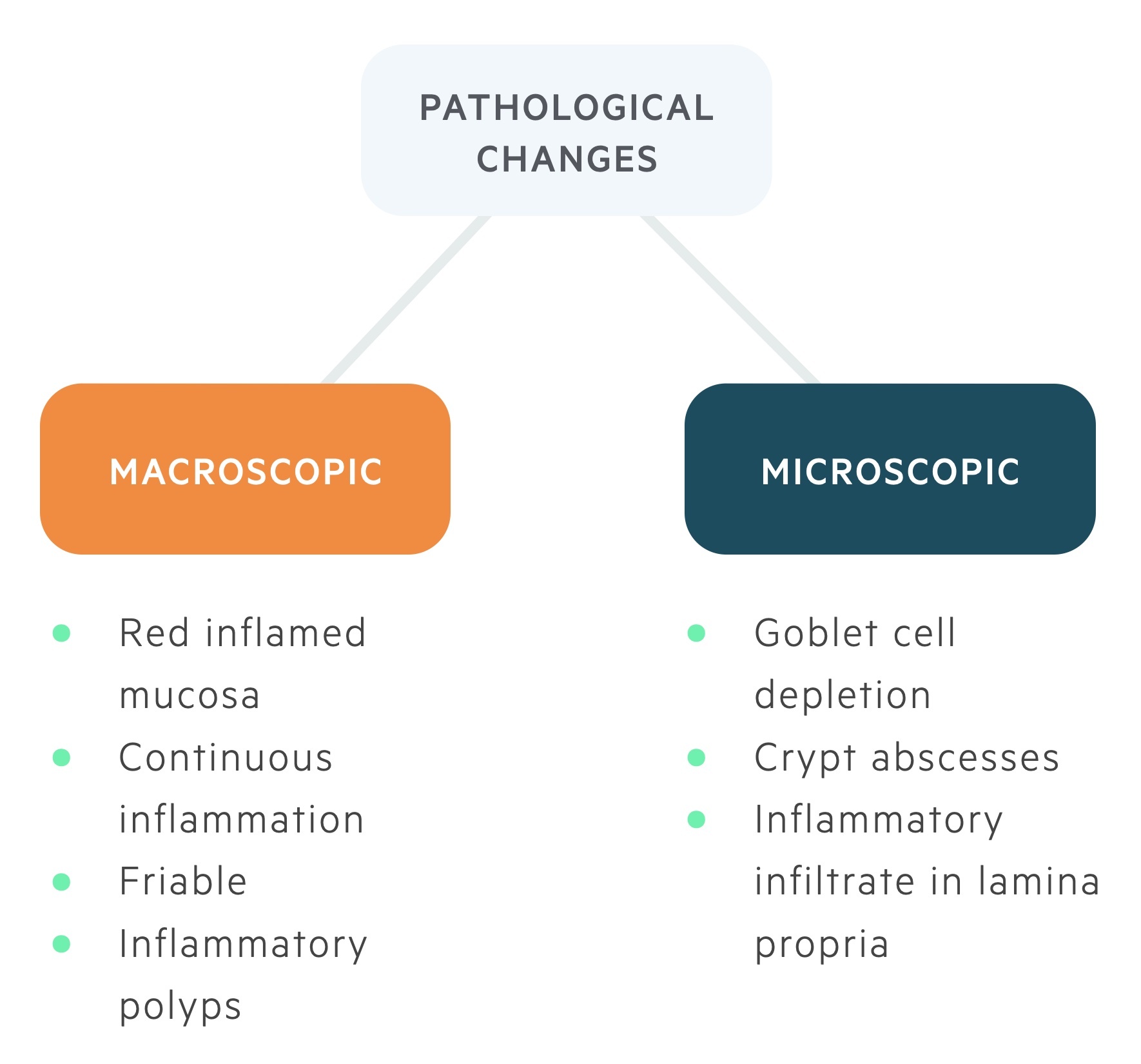 The hallmark of UC is bloody diarrhoea / rectal bleeding.

Patients with UC may become acutely unwell with features of hypovolaemic shock, so it is important to resuscitate patients with respect to airway, breathing and circulation. 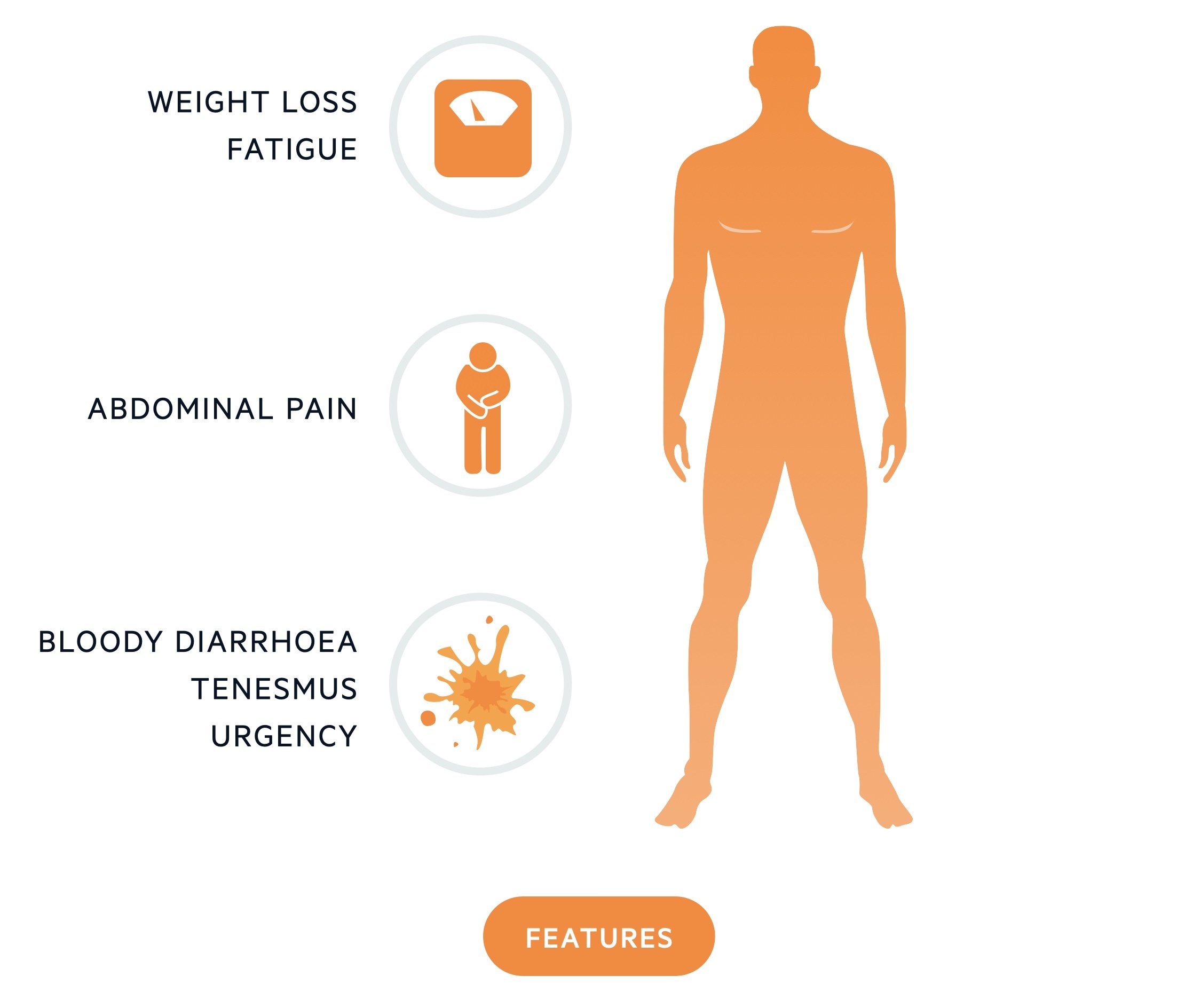 A major complication of UC is toxic mega colon (TMC).

TMC is a medical emergency, which refers to toxic, non-obstructive, dilatation of the colon (> 6cm). Patients with UC who present with abdominal distension and tenderness should be admitted for suspected TMC.

Other features suggestive of TMC include systemic symptoms such as:

Approximately 25% of patients will develop extra-colonic manifestations during their lifetime.

Arthritis is the most common extracolonic manifestation, which may be a simple peripheral arthritis or more complex spondyloarthropathy (e.g. ankylosing spondylitis). Other important musculoskeletal features include osteopaenia/osteoporosis and the presence of clubbing of the hands and feet.

Uveitis (inflammation of the uvea) is strongly associated with UC. Uveitis may be divided into anterior, intermediate and posterior. Other ophthalmic features include episcleritis, which refers to superficial inflammation of the sclera.

Extracolonic manifestations of the mouth commonly include aphthous ulcers. The skin is another organ widely affected by UC, leading to erythema nodosum, which is a type of panniculitis that classically results in multiple, painful, purple nodules on the anterior aspect of the shins.

However, the most common pathology is primary sclerosing cholangitis (PSC). PSC is thought to affect 3% of patients suffering from UC. Importantly, 70-95% of patients with PSC have UC. PSC should be suspected in any UC patient who has an isolated rise in ALP.

Two common haematological problems associated with UC are anaemia and thromboembolism. Both should be considered in any patient presenting with an acute exacerbation of UC, as they may require additional medical intervention. 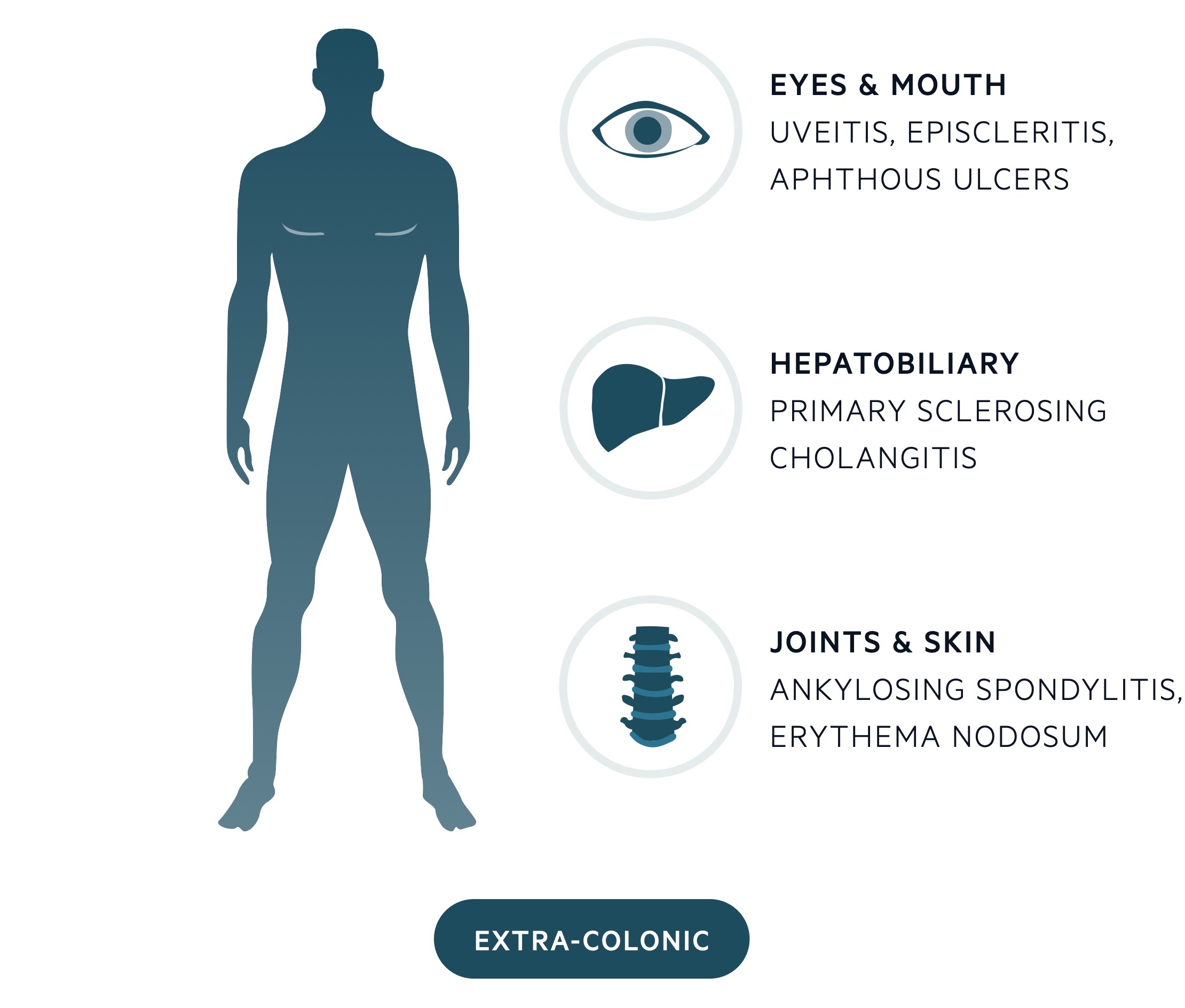 Diagnosis is based on macroscopic assessment (e.g. endoscopy) and histological evidence (e.g. biopsy) of colonic inflammation.

Abdominal X-rays are useful for looking at dilatation of the bowel and perforations. Dilatation is said to be present if:

Computed tomography may be organised where there is concern regarding complications (e.g. toxic megacolon) and prior to surgery.

Colonoscopy is considered the diagnostic investigation of choice as it allows assessment of the whole colon. Biopsies can be taken for histological assessment of the mucosa. Caution should be taken during acute flares due to the increased risk of perforation. Sigmoidoscopy may be used as an alternative endoscopic test.

The severity of UC in adult patients can be assessed using the Truelove & Witts' classification.

The Truelove and Witts' scoring categorise the severity of acute presentations of UC into mild, moderate and severe. You will notice a degree of variation (and modifications) in re-productions of this score, primarily a reflection of the relatively vague definition of moderate (or 'moderately severe') in the original paper.

The general principle in the management of UC is to induce and then maintain remission.

In modern medicine, there are numerous pharmacological options for the management of UC, which include steroids, immunosuppressive agents and biologics. These have revolutionised the treatment of UC and prevent many patients from having to undergo total colectomy (complete removal of the colon). Despite success with medications, an estimated 1 in 5 patients with UC have severe symptoms that do not respond to medications and requires surgery.

The choice of therapy will depend on disease severity, location, co-morbidities, patient preference and side-effects. Many patients require different medications during their disease course.

In patients presenting with UC for the first time, or those who develop a flare of UC, the principal aim is to induce remission with aminosalicylates (5-ASA) and/or steroids. In those presenting with acute severe ulcerative colitis based on Truelove & Witts criteria there is a distinct treatment pathway (discussed below).

In patients with mild-to-moderate UC, treatment is initially with 5-ASA agents (topically +/- orally). These medications can be used for both the induction of remission and continued maintenance. Patients with extensive UC (e.g. pancolitis or left-sided colitis) should be treated with both oral and topical (e.g. enemas) 5-ASAs. Those with proctitis (i.e. < 20 cm on flexible sigmoidoscopy) can be treated with 5-ASA suppositories alone.

Patients who fail to respond to maximum dose of 5-ASA agents, or those with moderate-to-severe UC, can be treated with the addition of systemic corticosteroids as a 6-8 week weaning course. Steroid enemas can also be added. If patients do not respond to steroids over a two week course then hospital admission and biologics can be considered.

Pharmacological options to maintain remission in UC predominantly include thiopurines and biologics. These are considered in patients who fail to respond to remission therapy (e.g. steroid-refractory), those who have two or more flares within a 12 month period or those who are steroid-dependent.

Patients with UC and Crohn’s disease are at increased risk of colorectal cancer. Currently, patients with IBD in the UK are offered surveillance colonoscopy between 6-10 years following diagnosis to screen for dysplasia (abnormal cell growth, predisposes to malignancy). The frequency of surveillance endoscopy depends on the presence of dysplasia, extent of disease, disease activity and co-morbidities. Patients with primary sclerosing cholangitis (PSC) are at a particularly high risk of cancer.

Patients with new suspected UC, or those presenting with a flare of UC, need assessment according to Truelove & Witts criteria. Any patients with severe symptoms need admission to hospital for urgent assessment and treatment.

All patients with suspected ASUC require:

Other things to consider include:

If patients fail to respond to treatment with 72 hours then rescue therapy should be considered.

We'd love to hear your feedback on our Ulcerative colitis notes.