Thalassaemia refers to a group of disorders characterised by reduced or absent globin chain production.

Thalassaemia is one of the haemoglobinopathies, which refers to a group of autosomal recessive inherited disorders that affect the globin chains that form the protein component of haemoglobin.

Haemglobinopathies can be broadly divided into two types:

Thalassaemia can be further divided depending on the type of globin chain affected:

Haemoglobin is the main oxygen-carrying molecules within our red blood cells.

Haemoglobin (Hb) is essential for the transport of oxygen around the body. It is composed of four globin chains and four heme molecules, which are the actual oxygen-binding structures that contain iron.

The combination of different globin chains determines the type of haemoglobin. 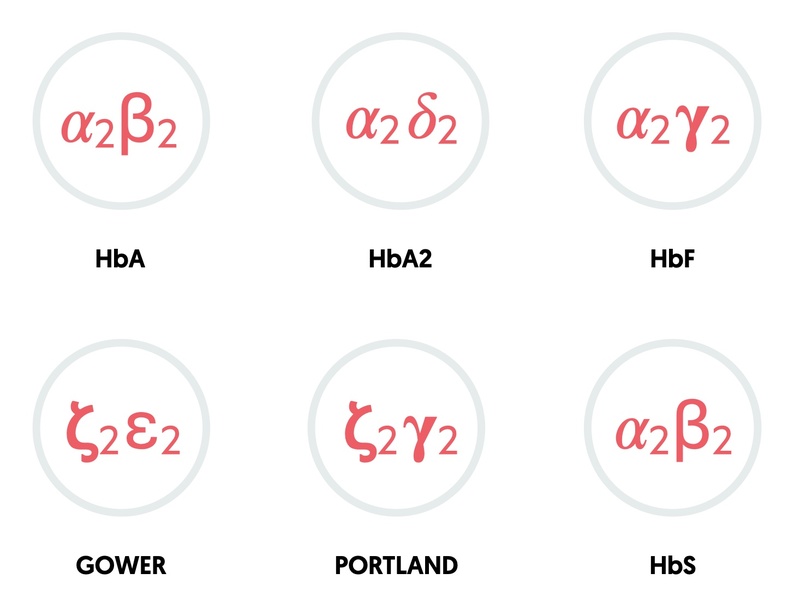 In the human body, there are two major gene clusters important for the synthesis of globin chains in the formation of haemoglobin: 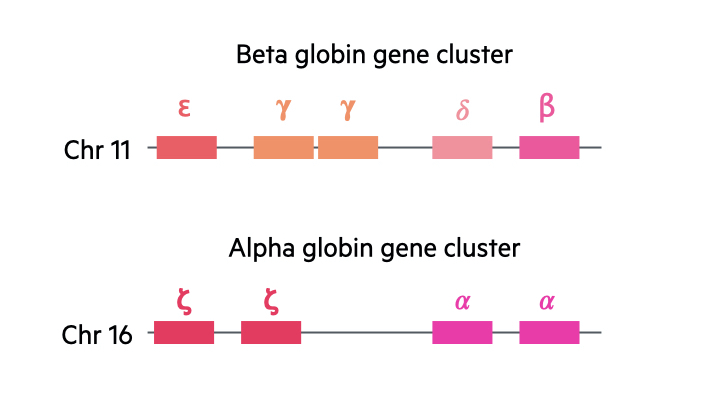 When we look at abnormal mutations seen in thalassaemia, we use the following denotation:

Alpha thalassaemia is one of the most common single gene disorders worldwide.

Anyone may be a carrier of an alpha thalassaemia gene, but is it most prevalent in sub-Saharan Africa, the Middle East, Mediterranean regions and areas of Asia (South and South-East).

Globally, it is estimated that 3 in 100 of the world’s population will have a thalassaemia gene (alpha or beta).

In alpha thalassaemia, mutations in the alpha globin genes lead to reduced or absent production.

Mutations seen can include:

Alpha thalassaemia can be considered an autosomal recessive disorder. However, because there are two genes on each chromosome that encode the alpha globin chains, there are multiple types of alpha thalassaemia.

The severity of thalassaemia depends on both the number, and how, the genes are affected.

Patients with alpha thalassaemia trait are usually asymptomatic. There may be evidence of mild microcytic anaemia on routine blood testing. There are no specific treatments required. The condition is clinically relevant for offspring. If two patients with alpha thalassaemia trait or minima have a child, there is a risk of HbH or Hb Barts syndrome.

The consequence of the abnormal HbH is a reduced red cell survival with a hypochromic microcytic anaemia. These cells are also removed from the circulation at an increased rate by the spleen. The severity of anaemia is variable depending on the mutation.

The HbH haemoglobin is at increased risk of oxidative stress and is ineffective as an oxygen delivering molecule. This is because, like myoglobin, it holds onto oxygen with higher affinity. It is estimated to have an affinity for oxygen at least 10 times that of HbA (normal haemoglobin).

This is the most severe form of alpha thalassaemia that results from inheritance of four abnormal copies of the alpha globin gene. The condition is incompatible with extrauterine life.

It is characterised by the formation of Hb Barts, which is composed of four gamma globin chains. Normal haemoglobin synthesis begins in the 5-6th weeks of intrauterine life, so effects are seen early in pregnancy. Like HbH, Hb Bart’s binds to oxygen with high affinity and is unable to release it to tissues.

Due to the presence of embryonic globin chains, the foetus can survive into the third trimester. However, the poor oxygen delivery, reduced red blood cell survival and compensatory extramedullary erythropoiesis leads to severe anaemia, high-output cardiac failure and generalised oedema. This clinical picture is known as Hydrops fetalis.

The clinical spectrum of alpha thalassaemia is highly variable depending on the type and number of mutations.

The clinical picture of HbH is highly variable. Some patients will be relatively asymptomatic with mild degrees of anaemia. Other patients may require intermittent transfusions, whereas others have severe anaemia with marked extramedullary haematopoiesis.

Hb Barts is incompatible with extrauterine life. There are reports of patients surviving for variable periods following birth, but this is with red blood cell transfusions and advanced medical care.

The majority of patients with alpha thalassaemia will be completely asymptomatic.

Most patients with alpha thalassaemia minima or minor will be completely asymptomatic and not realise they have the underlying condition. More severe forms of alpha thalassaemia may be suspected in babies or children presenting with anaemia and jaundice.

Babies presenting within 6 months of birth are more likely to have alpha thalassaemia because the alpha globin chain is already needed in production of haemoglobin.

On haemoglobin analysis, patients with Hb Barts will have a complete absence of HbA, HbA2 and HbF because of an inability to produce alpha globin chains. Patients with HbH will have clear evidence of HbH alongside elevated levels of HbF and HbA2. There may be small amounts of Hb Barts.

Screening for thalassaemia is offered to all pregnant women within the UK.

Antenatal screening is offered to all pregnant women within the UK. It involves concurrent assessment of different haemoglobinopathies (i.e. thalassaemia and haemoglobin variants) at 10 weeks gestation. Family origin questionnaires are essential as part of the screening programme to determine the risk of being a carrying of a haemoglobinopathy gene.

Patients with alpha thalassaemia minima or trait do not require treatment.

There is no specific treatment for patients with mild forms of alpha thalassaemia. The only issue is related to antenatal care if the unborn child is at risk of more severe forms of alpha thalassaemia. There are novel treatments for patients with Hb Barts disease including intrauterine blood transfusions and bone marrow transplants, but this is extremely specialist and not discussed here.

Management in alpha thalassaemia focuses on patients with HbH disease, which has a wide spectrum of severity. Some patients may require sporadic transfusions, whereas others remain transfusion dependent due to chronic, severe haemolytic anaemia. Some of the key principles of management are discussed below:

We'd love to hear your feedback on our Alpha thalassaemia notes.