Macrocytic anaemia describes the presence of a reduced haemoglobin concentration and an increase in the mean corpuscular volume (MCV). 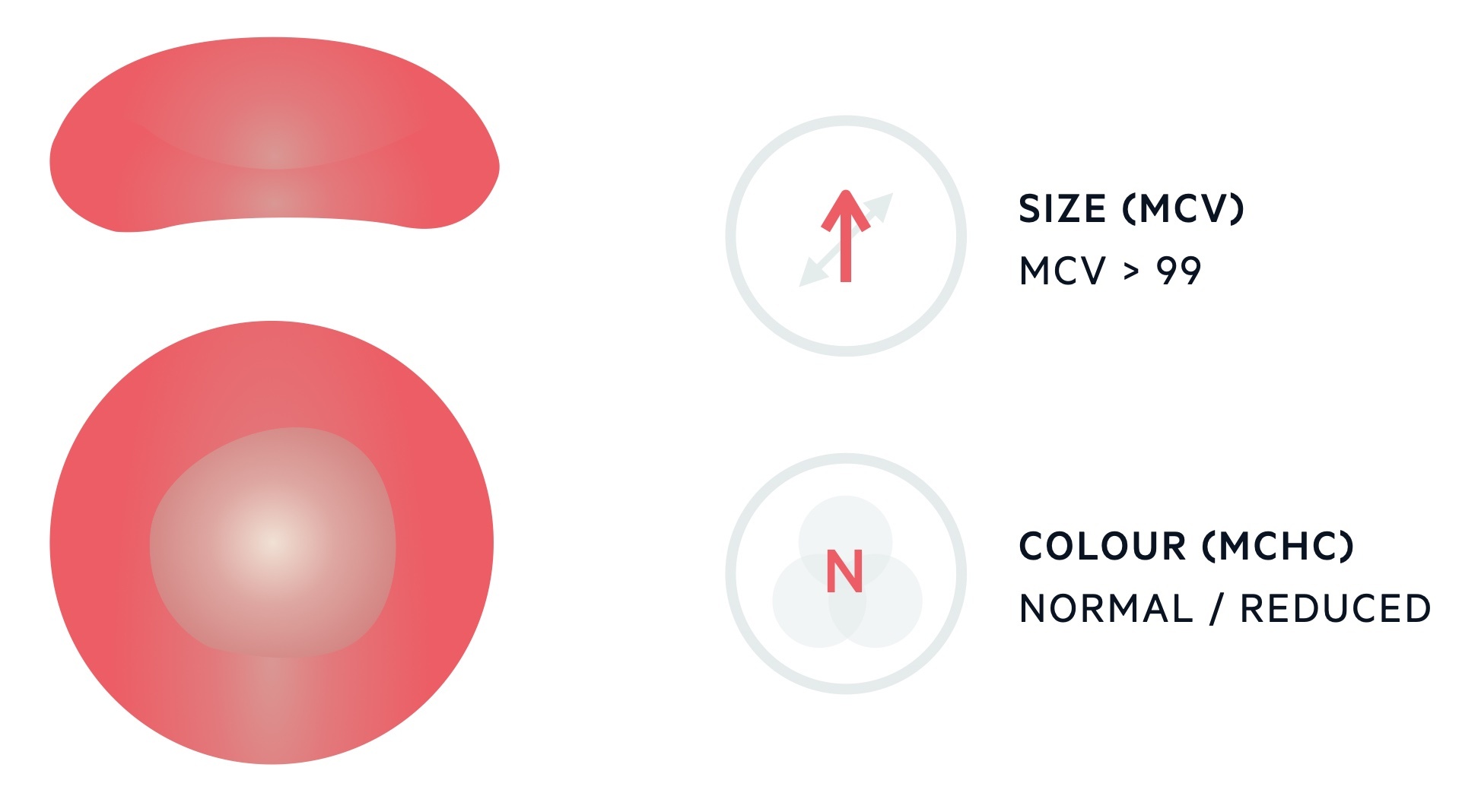 The MCV describes the mean volume of erythrocytes and is measured in femtolitres (fL). The standard range for erythrocytes is 82-99 fL. Levels > 99 fL are considered macrocytic. 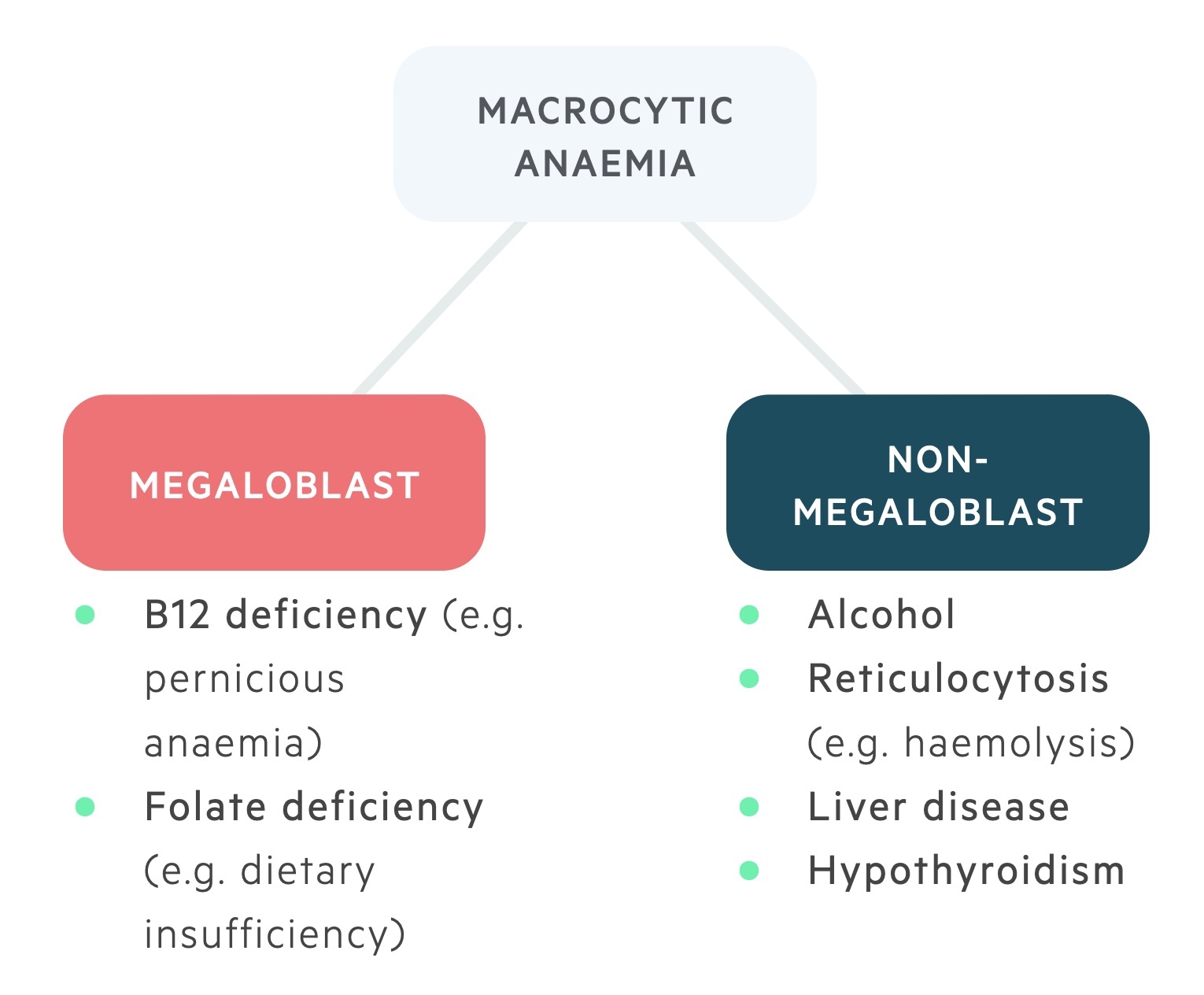 Clinical features are dependent upon the absolute degree of anaemia & rate of decline in Hb concentration. 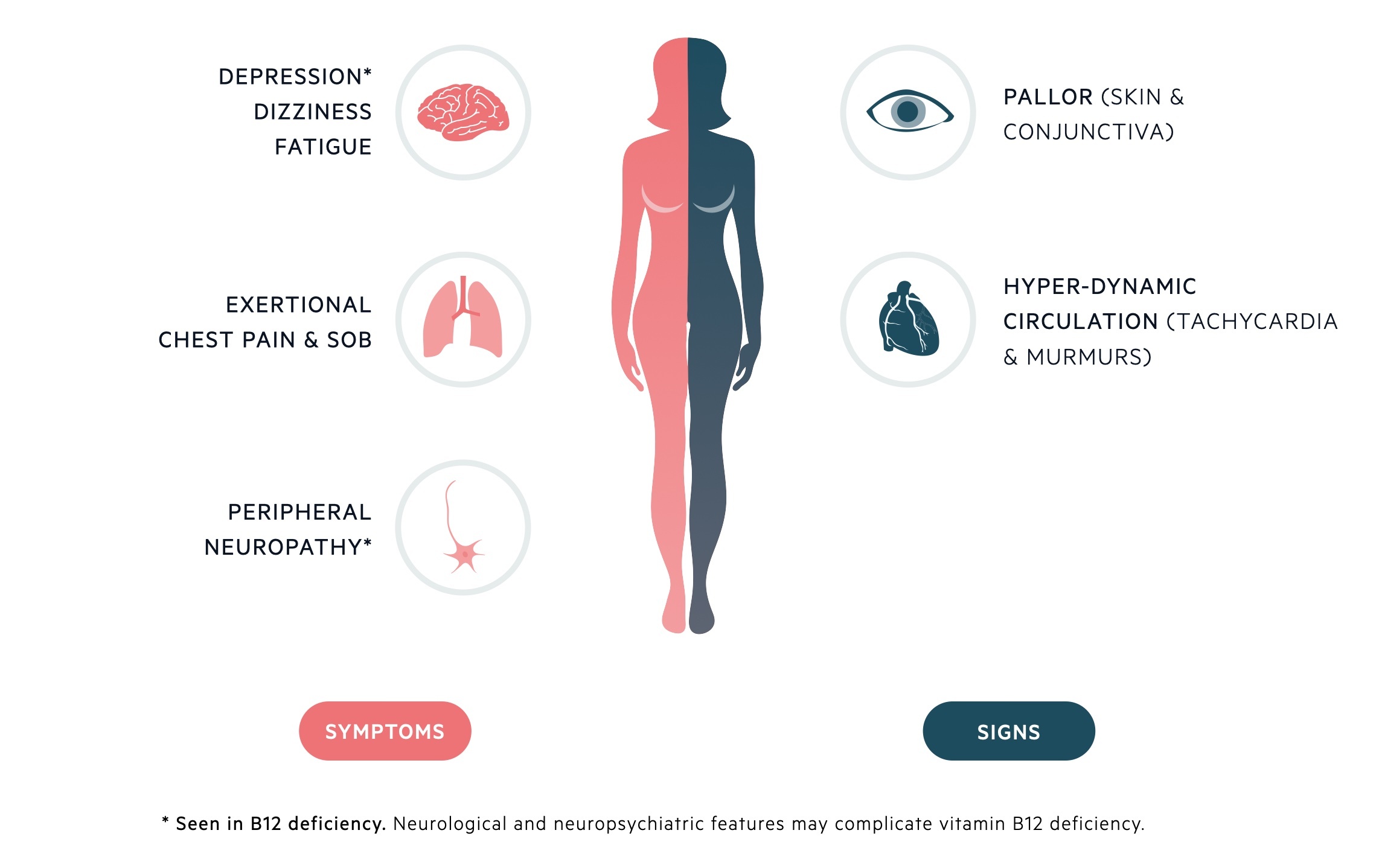 Megaloblasts are immature red cells with large nuclei seen in B12 & folate deficiency.

Megaloblastic anaemia is characterised by the development of megaloblastic erythropoiesis, in which abnormal erythrocyte progenitors are seen (megaloblasts). 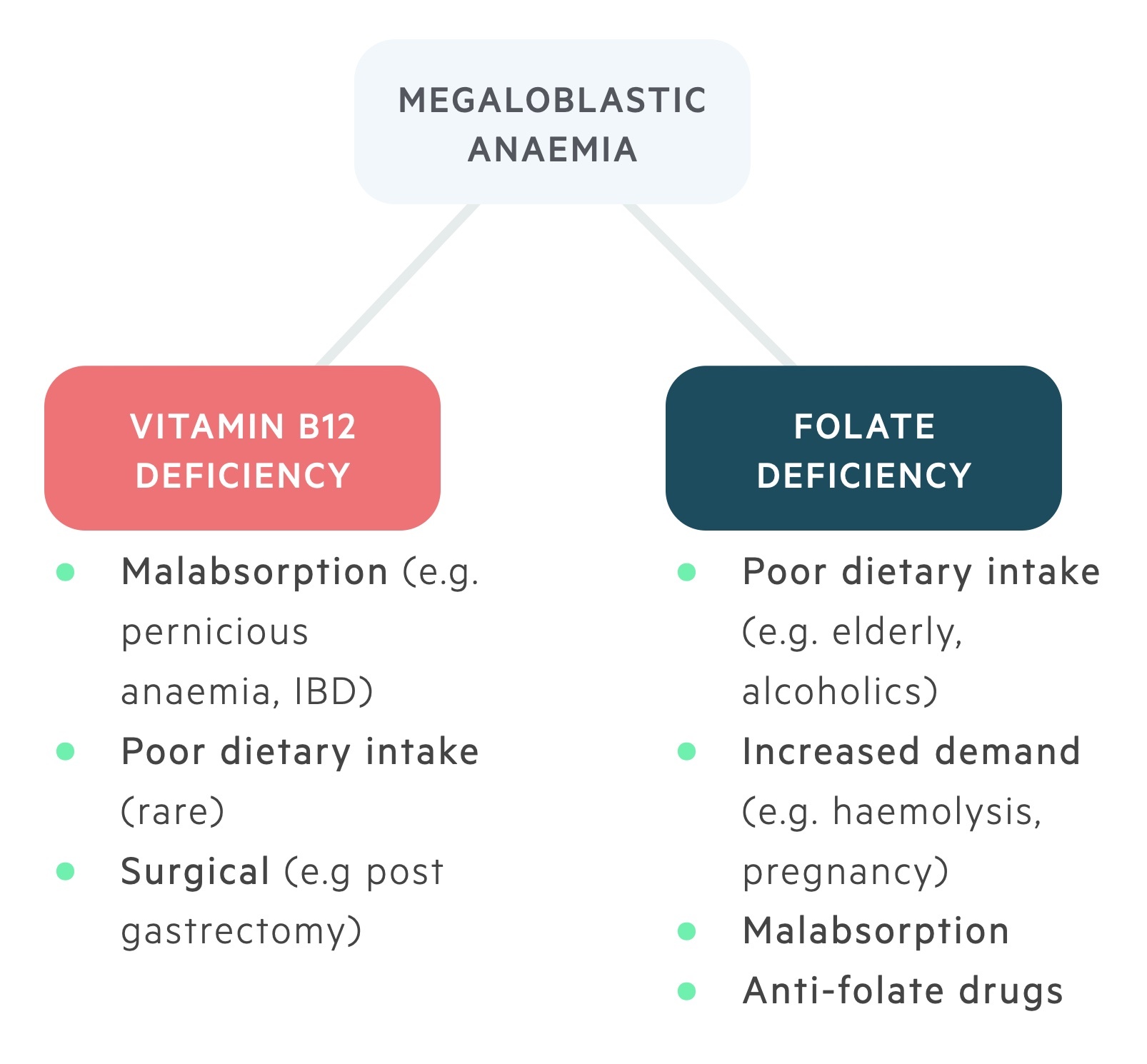 Significant disturbance in cellular proliferation leads to degradation whilst still in the bone marrow. As a result, there is erythroid hyperplasia with ineffective erythropoiesis - leading to anaemia.

Other cell lines may also be affected. Another common feature is the generation of hypersegmented neutrophils. Typically, in megaloblastic erythropoiesis, more than 3% of neutrophils will have greater than 5 nuclear segments (normal being 3-5).

However, it is important to note that this is not a diagnostic feature and may be seen in other conditions, such as renal failure.

Vitamin B12 (cobalamin) is found in meats and diary products. It is an essential vitamin for DNA synthesis in cells undergoing rapid proliferation.

Vitamin B12 is predominantly found in meat and dairy products (due to bacterial synthesis) and is not present in plants. Thus, dietary deficiency is uncommon and typically seen only in strict vegans.

Absorption of vitamin B12 is a complex process; it is aided by a key glycoprotein, intrinsic factor (IF).

Parietal cells, found in the gastric epithelium, secrete IF. IF binds to vitamin B12 within the intestines. The subsequent vitamin B12-IF complex binds to receptors within the terminal ileum where it is absorbed.

Causes of vitamin B12 deficiency include:

Vitamin B12 deficiency is most commonly due to pernicious anaemia (PA).

Signs & symptoms may reflect the underlying cause & neuropsychiatric complications.

Investigations help demonstrate the reduction in vitamin B12 and the development of anaemia. These include full blood count (FBC), blood film, haematinics, lactate dehydrogenase​ (LDH) and liver function tests (LFTs).

Blood tests usually reveal profoundly macrocytic anaemia with a raised MCV. Bilirubin and LDH may be slightly elevated - indicating increased turnover of abnormal progenitors in the bone marrow. If a bone marrow aspirate is taken, megaloblastic erythropoiesis, marked erythroid hyperplasia with ineffective erythropoiesis with the development of giant metamyelocytes, may be demonstrated.

Other investigations are directed towards identifying the underlying cause of vitamin B12 deficiency. These can include: Schilling's test, gastroscopy and serological assessment (e.g. autoantibodies seen in PA).

Management involves B12 replacement & treatment of the underlying cause.

Treatment typically takes the form of intramuscular hydroxocobalamin. A dose of 1 mg, three times a week for two weeks, followed by maintenance of 1 mg every three months.

Importantly, in patients with co-existing folate deficiency, B12 must be replaced first as folate replacement in this setting may precipitate neurological complications (e.g. subacute degeneration of the cord).

Subacute degeneration of the cord

Degeneration of the posterior & lateral columns of the spinal cord.

Traditionally, presents insidiously with numbness, weakness and paraesthesia affecting the lower extremities in a symmetrical manner. As the condition progresses, it can lead to ataxia (unsteady, uncoordinated movement), sensory deficit and autonomic dysfunction (e.g. bladder/bowel dysfunction). These features may be accompanied by peripheral nerve involvement.

Pernicious anaemia (PA) refers to vitamin B12 deficiency as a result of autoimmune destruction of the gastric epithelium.

Relatively common amongst Northern Europeans, with a high prevalence in those aged 60-70 years old.

Patients with PA typically develop chronic gastric inflammation, which may lead to gastric atrophy. Over time, the basal secretion of IF is severely decreased leading to the development of vitamin B12 deficiency.

Associated with the development of a number of auto-antibodies:

Schilling’s test is the classic investigation for the diagnosis of PA - though is now rarely used in clinical practice. The test is divided into two stages:

Patients with pernicious anaemia have an increased risk of gastric malignancy. The role of routine screening is currently inconclusive, but patients do warrant an initial assessment of the upper GI tract with endoscopy at the time of diagnosis.

Folate (vitamin B9) is an important molecule which acts as a cofactor in amino acid metabolism and DNA/RNA synthesis.

Folate is commonly found in a variety of food sources, but due to its rate of loss being 10-20 times greater than B12, deficiency states can develop much more rapidly.

In general, megaloblastic anaemia and folate deficiency are seen most commonly in countries where malnutrition is problematic.

Exact epidemiology of folate deficiency is not well known, but high-risk patient groups include: children, pregnant women and the elderly.

Folate is found in both animals and plants, and the daily requirement of folate is approximately 100-200 micrograms per day.

Absorption of folate occurs within the proximal part of the small intestines (e.g. duodenum & jejunum).

There are plenty of hepatic stores of folate (approx. 8-20 mg), but this reserve is lost rapidly from cellular metabolism and the shedding of epithelial cells. There is an estimated loss of 1-2% of stores per day. Therefore, folate deficiency can develop after months, compared to vitamin B12 deficiency, which tends to develop over years.

Inadequate dietary intake of folate is extremely common, especially seen in elderly patients. As folate absorption occurs in the upper part of the small intestines, conditions that affect this area of the bowel (e.g. Coeliac disease) commonly lead to deficiency.

Features of folate deficiency are primarily related to the underlying anaemia. Clinical features may include weakness, fatigue, pallor and other evidence of malnutrition.

Other clinical features will be related to the underlying cause of folate deficiency. For example, in Coeliac disease, there may be evidence of gastrointestinal symptoms such as diarrhoea, bloating, dyspepsia and abdominal discomfort.

Diagnosis of folate deficiency is based on a series of blood tests, which show the development of megaloblastic anaemia with a high MCV and low folate stores.

Blood tests include: FBC, blood film, haematinics and red cell folate. Red cell folate is a better measure of levels than serum folate, since levels are affected even with a short period of deficiency.

Importantly, levels of folate may be affected by vitamin B12 deficiency and it may be difficult to distinguish between the two.

General management of folate deficiency is to treat the underlying cause if required and to provide supplemental folic acid.

Folic acid is usually given as a once daily oral dose of 5 mg for up to four months. Levels can be repeated in primary care. Importantly, pregnant women should receive folate supplementation prior to conception until 12 weeks (400 mcg or 5 mg daily) due to the risk of neural tube defects.

A group of macrocytic anaemias that do not lead to megaloblastic erythropoiesis.

Causes of non-megaloblastic anaemia are varied and include:

Chronic alcohol use is the most common cause of a non-megaloblastic anaemia. It is thought to be due to the toxic effects of acetaldehyde on erythrocyte progenitors.

Haemolytic anaemia may lead to macrocytic anaemia due to the increased release of reticulocytes from the bone marrow. Reticulocytes are immature RBCs that are bigger in diameter and contain remnant nuclear material.

Many medications may be implicated in the development of macrocytic anaemia, usually from the inhibition of metabolic pathways needed for erythropoiesis. Causative drugs include cyclophosphamide​, hydroxyurea and azathioprine.

We'd love to hear your feedback on our Macrocytic anaemia notes.