Malaria is a potentially life-threatening illness that is caused by the Plasmodium protozoa.

Malaria is one of the most well known tropical diseases worldwide. In the UK, malaria is characterised by fever in travellers returning from endemic areas. Malaria is caused by the Plasmodium protozoa, which are transmitted to humans by Anopheles mosquitoes. These insects transmit the parasite following the bite of an infected female.

There are five different types of Plasmodium protozoa that can cause malaria in humans.

P. falciparum is associated with the most severe form of malaria, which can lead to multi-organ failure. Malaria should always be suspected and excluded in a patient presenting with a fever from an endemic area, even if they have been taking malaria prophylaxis. Data from the UK shows that not taking malaria prophylaxis was implicated in 85% of patients who developed malaria while travelling abroad.

Malaria is endemic in most tropical regions throughout the world.

Malaria is a global disease that is found throughout tropical regions. P. falciparum accounts for the largest burden of disease and is predominantly located within sub-Saharan Africa. P. vivax is the next most prevalent species of Plasmodium, usually located in the Americas and Western pacific regions. P. malariae and P. ovale are uncommon, located in sub-Saharan Africa and Western Africa, respectively. P. knowlesi is mainly identified in Southeast Asia.

The estimated annual cases of malaria is 300-500 million, which accounts for 1-3 million deaths. More than 85% of deaths are attributed to P. falciparum in sub-Saharan Africa. Males and females are equally affected.

Within the UK, malaria is the most common imported tropical disease in patients returning from endemic areas. The majority of cases are from P. falciparium. Rarely, malaria may occur within the UK. This is usually secondary to mosquitoes that have travelled in baggage and subsequently bite a patient. This is termed ‘airplane’ or ‘baggage’ malaria.

There are five known species of Plasmodium that cause malaria in humans.

Malaria is caused by the Plasmodium protozoa, which are single-celled eukaryotes. Humans acquire the parasite through an infected Anopheles mosquito bite, which are contained within its salvia. There are five types of Plasmodium that can cause infection in humans.

The life cycle of Plasmodium is complex, involving two hosts and three cycles.

The two hosts in the life cycle of Plasmodium are the Anopheles mosquito and humans. Among these two hosts there are three replication cycles.

The life cycle starts when an infected Anopheles mosquito transmits the plasmodium protozoa at the sporozoite stage of development into the human host during a blood meal (i.e. bite). The sporozoite then passes to the liver and undergoes asexual replication.

The parasite is then released from hepatocytes and infects erythrocytes. It undergo further asexual replication with eventual rupture of erythrocytes. This allows the organism, now a merozoite, to infect more red blood cells. Some of the parasites develop into gametocytes. These are needed for its sexual reproductive cycle.

If an Anopheles mosquito takes a blood meal from an infected patient, these gametocytes are transmitted and undergo sexual replication in the mosquito. They eventually form sporozoites, which can be transmitted to another human host and the cycles continue.

This involves the sexual reproduction of male and female gametocytes within the midgut of Anopheles mosquitos. Within the midgut, microgametes penetrate macrogametes to form zygotes. These zygotes then develop into ookinetes, which are motile and elongated. These ookinetes invade the midgut wall and develop into oocytes. As oocytes grow, they eventually rupture releasing many sporozoites that migrate to the insects salivary glands. Here, they can be transmitted to a human host.

The sporogonic cycles takes around 10-18 days for the formation of sporozoites that can infect humans.

In this cycle, sporozoites are transmitted from the bite of an infected female Anopheles mosquito into humans. They travel to the liver, where they infect hepatocytes and undergo asexual replication into schizonts. Schizonts contain thousands of developing merozoites, which can be released into the blood stream when they rupture.

Both P. vivax and P. ovale have a dormant liver phase as part of their life cycle. They can form hypnozoites in the liver, which are undetectable. These can reactive later and form merozoites causing ‘clinical relapse’.

In humans, the exo-erythrocytic phase is asymptomatic and patients are not infective. If sporozoites are removed by the immune system before they can establish infection in the liver, then patients will not progress to the erythrocytic cycle.

The time between infection of red blood cells, growth and subsequent erythrocyte rupture is characteristic of different plasmodium species and correlates with the clinical features of malaria.

During the erthocytic phases, some merozoites within erythrocytes develop into male and female gametocytes. This are needed for the sexual reproductive phase that occurs within Anopheles mosquitos during the sporogonic cycle. These gametocytes may stay in the circulation for weeks until transmitted to an Anopheles mosquito during a blood meal (i.e. bite).

Malaria is classically associated with fever and anaemia due to red blood cell haemolysis. However, the condition can cause of range of clinical manifestations that affect multiple organs.

This diverse range of clinical manifestations is thought to be due to infected erythrocytes adhering to small blood vessels causing small infarcts, leakage of capillary vessels and ultimately organ dysfunction. The distribution and severity of organ dysfunction depends on the species of plasmodium, burden of parasites and patient demographics.

A wide range of clinical manifestations may develop in patients with malaria.

Malaria classically presents as fever in a patient returning from, or being treated in, an endemic area. The majority of cases will be P. falciparum and symptoms are mostly likely to occur within 1 month of exposure.

Physical examination may be unremarkable, particular in uncomplicated malaria (i.e. not severe). If present, can include:

Malaria can be associated with widespread organ dysfunction. It is important to look for clinical features of severe malaria (as below):

This describes the classic presentation of dark red urine in the context of a febrile malarial illness. It is due to severe haemolysis and release of free haemoglobin with subsequent haemoglobinuria.

The diagnosis of malaria is based on malarial films (thick and thin slides) and rapid diagnostic tests.

Microscopic examination of a blood film remains the ‘gold-standard’ diagnostic tool for malaria.

A blood specimen is taken from a patient and prepared on a slide using a Giemsa stain. Light microscopy is then used to identify the parasite within erythrocytes. Films are useful in both quantification of the parasitaemia burden and identification of the Plasmodium species. Highest yield of detection is around the time of fever. 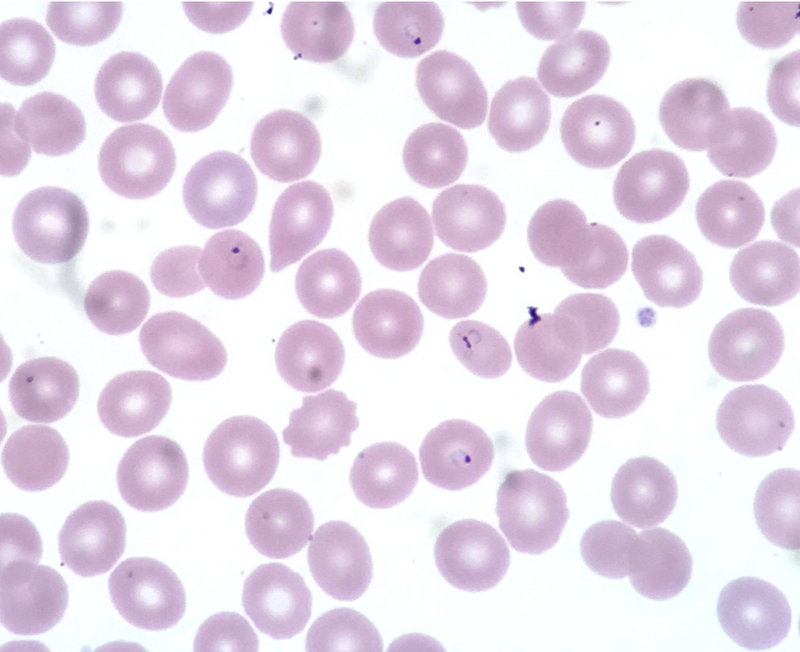 Importantly, a single negative film does not exclude malaria. Traditionally, it is recommended that a total of three thick and thin blood films should be completed within a 36 hour period as a minimum to exclude malaria (12-24 hours apart between tests).

Films are labour intensive and it is difficult to detect parasites when levels are < 5-10 parasites per microlitre.

These are newer diagnostic tests that can be completed within 15-20 minutes. They involve the detection of malarial antigens (usually histidine-rich protein 2 or Plasmodium lactate dehydrogenase) within an infected patients blood. It utilises antibodies mounted on a testing strip.

Some RDTs can only detect P. falciparum, whereas others can differentiate between species (e.g. P. vivax, malariae, ovale). RDTs must be combined with thick and thin films as there are rare cases of false negatives (albeit sensitivity and speciality > 90%) and they are unable to quantify the parasite burden.

Investigations are crucial to exclude any complications secondary to malaria.

The treatment of malaria depends on the species and whether it is uncomplicated or severe.

Malaria without any evidence of organ dysfunction or severe features can be treated with oral tablets as an outpatient. Criteria for uncomplicated malaria includes:

Patients managed as an outpatient should be able to maintain adequate oral intake and advised to complete the course of oral anti-malarial treatment. Safety-netting advice should be given to return if their condition worsens or they are unable to complete the oral course. It may be necessary to manage some higher risk patients as an inpatient because of the risk of deterioration. This may include the young (< 16 years), old (> 65 years), during pregnancy, or significant co-morbidities.

Patients with any severe features should be treated as 'complicated' malaria:

Severe malaria requires parenteral anti-malarial treatment and inpatient admission. There should be a low threshold for admission to a high-dependancy or intensive care unit for observation and further treatment as necessary.

Follow-on therapy (once improved and able to tolerate oral tablets):

Treatment of non-falciparum malaria or mixed

Patients with mixed malaria, which refers to infection by several different species, should be treated as P. falciparum (if present). This also applies where the speciation of malaria is difficult to ascertain.

Non-falciparum malaria should be discussed with microbiology and local guidelines followed. Patients are usually able to be managed as outpatients. Treatment is usually with chloroquine, but this depends on resistance patterns. Follow-on treatment is typically required for P. vivax and P. ovale.

G6PD is an x-linked recessive inherited haemolytic anaemia, which can cause red cell lysis when erythrocytes are put under oxidative stress. A number of drugs, including some antimalarials, can induce red cell haemolysis. It is therefore important to determine about G6PD from the history or consider G6PD testing.

Anti-malarials implicated in haemolysis in G6PD:

There are different options available, which have different timings for doses, duration required after leaving endemic area, cost and associated side-effects. It is always advisable to consult with a travel clinic (many GP practices offer this service) and follow UK government guidelines, which has a wealth of information.

Malaria can be a devastating condition leading to multi-organ failure and ultimately death.

Severe malaria is invariably fatal if left untreated and the majority of cases are due to P. falciparum.

We'd love to hear your feedback on our Malaria notes.