Bacteria are prokaryotic (single-celled) microorganisms that are found in both human health and disease.

Bacteria range in size from approximately 0.5-5.0 micrometers in length and different in morphology. Typical shapes of bacteria include spheres (i.e. cocci) and rods (i.e. bacilli) .

The human body is colonised with trillions of bacteria in normal health. This collective is known as the human microbiota and is important for normal functioning.

Bacteria are also the cause of many clinically relevant infections in humans. Microbiology describes the branch of medicine that deals with microorganisms, such as bacteria, which are critical in all aspect of medicine.

The cell wall forms the outer aspect of bacteria, which protects it against host immune defences and external osmotic pressures. The cell wall differs depending on whether the organisms is gram positive or gram negative. These are the two major groups of bacteria.

Some bacteria do not have a cell wall (i.e. mycoplasma). Bacteria without a cell wall replicate intracellularly within host cells. Due to the absence of a cell wall these bacteria cannot be identified on gram stain. 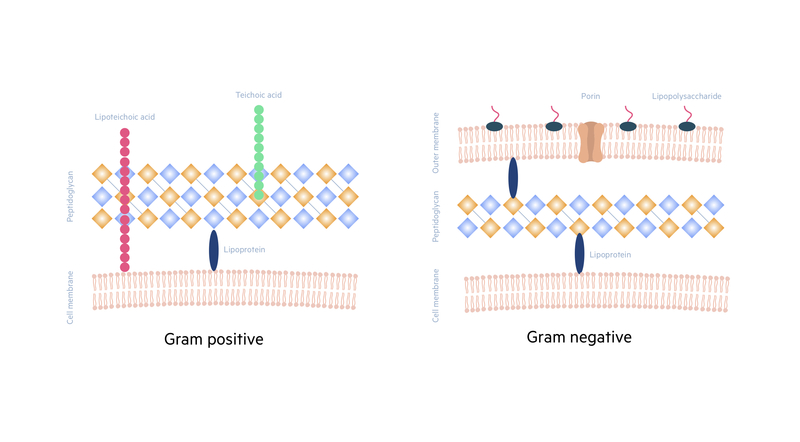 Similar to the plasma membrane in mammalian eukaryotic cells, the cytoplasmic membrane surrounds the cytosol and acts as a chemical barrier controlling substances pass in and out the cell

Some bacteria contain a capsule that is external to the cell wall. Bacterial capsules are composed of high-molecular-weight polysaccharides. We can use knowledge of capsular structure to subcategorise bacteria (i.e. Streptococcus pneumoniae).

Flagella are spiral-shaped filaments consisting of protein and flagellin. They assist in bacterial movement.

Nuclear material in bacteria is free within the cytoplasm. In addition, DNA is found in structures known as plasmids, which are small rings of DNA found in the cytoplasm. Bacterial plasmids usually contain genes important for virulence and may be transferred from one microorganism to another.

Bacteria contain many important intracellular components such as ribosomes. Ribosomes in bacteria are smaller (70S) than eukaryotic ribosomes (80S) and due to this difference they may be targeted by antibiotics.

Gram staining is a technique used to identify microorganisms under a microscope and differentiate between two major groups of bacteria (gram positive and gram negative).

Gram staining colours the bacterial cell walls red/pink or violet/blue. In gram positive bacteria, the cell wall is stained violet/blue due to the thick peptidoglycan layer. This causes retention of the violet crystal used during the gram staining technique. In gram negative bacteria, the cell wall is stained red/pink due to the thin peptidoglycan layer. Here, there is less retention of the crystal. 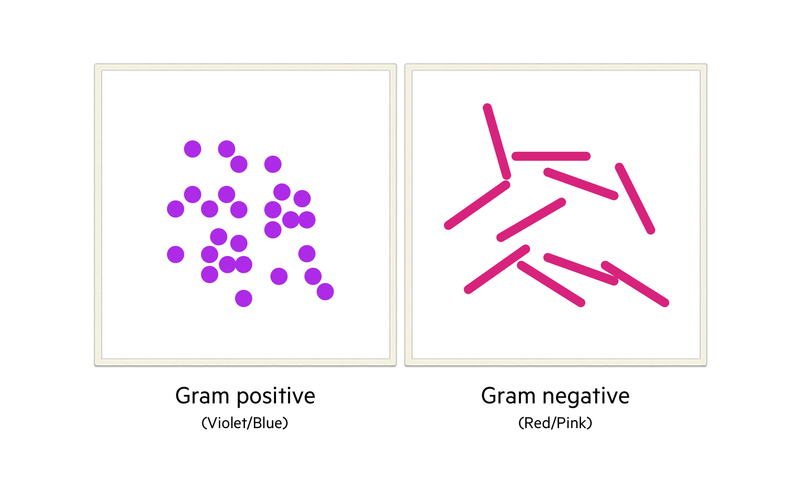 Bacteria can be broadly divided into two main groups (gram positive or gram negative) based on gram staining of the bacterial cell well. 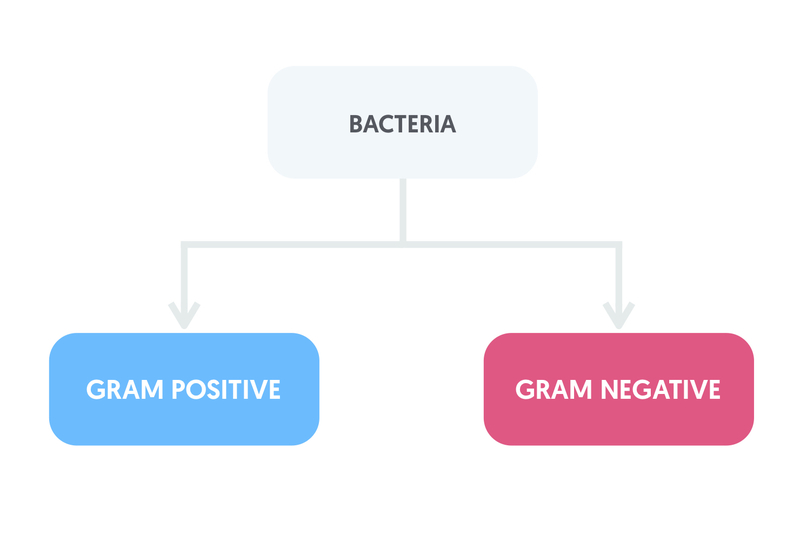 Gram negative bacteria are further divided based on the morphology, which can be assessed under the microscope. The two major groups are cocci (spheres) and bacilli (rods). 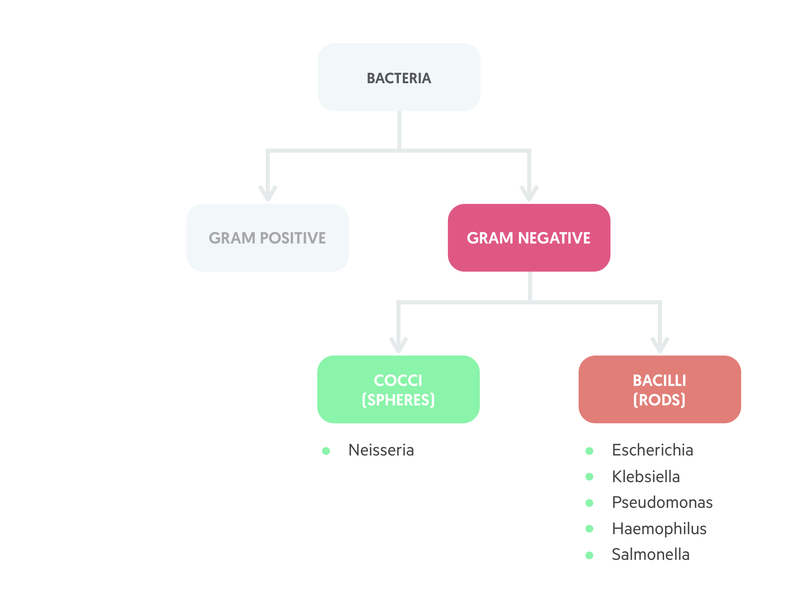 Further differentiation is then based on laboratory and molecular techniques that assess the different characteristics of gram negative bacteria.

Coliform is a generic term that refers to fermentative rod-shaped gram-negative microorganisms.

This includes common clinically relevant gram negative infections such as E. coli and K. Pneumoniae. A less restrictive definition may also include Pseudomonas. The term is commonly used in clinical medicine as a colloquial reference to gram negative bacilli.

Bacteria that have beta-lactamases with an extended-spectrum to a wide-range of beta-lactam antibiotics are known as ESBLs. These are a significant medical problem because only limited antibiotics can be used to treat ESBL infections. Two common microorganisms with ESBL activity include E. coli and K. pneumoniae.

Escherichia are commonly associated with urinary and gastrointestinal infections and a major cause of nosocomial infections (hospital-acquired).

Escherichia are rod-shaped (bacilli), facultative anaerobic microorganisms. They are referred to as coliforms.

Commonly found in the lower intestines.

E. Coli 0157 is a specific serotype of Escherichia that can cause haemolytic uraemic syndrome (HUS). HUS is a clinical syndrome that can occur following a diarrhoeal illness with the 0157 serotype. It presents with acute kidney injury, haemolytic anaemia and thrombocytopenia.

HUS is one of the microangiopathic haemolytic anaemias (non-immune mediated destruction of erythrocytes) that occurs due to damage and dysfunction of the endothelial lining of blood vessels.

Numerous antibiotics can be used to treat E. coli. However, due to increasing resistance patterns and the emergence of ESBLs, many require the use of intravenous broad-spectrum antibiotics.

Klebsiellae are a major cause of nosocomial infections, particularly affecting the biliary system, urinary system and lower respiratory tract.

There are three major Klebsiella species that cause infections in humans.

Klebsiellae are resistant to numerous antibiotics and treating them is becoming more difficult especially with ESBLs. Typical antibiotics choices include cephalosporins, aminoglycosides and quinolones.

Pseudomonas is an opportunistic pathogen, causing infections in patients with weak immune systems.

The major human Pseudomonal pathogen is Pseudomonas aeruginosa, which is found ubiquitous in the environment.

Pseudomonas is a ubiquitous organism found throughout the environment in soil, water, plants, sewage, and hospitals. Within humans it can be found at multiple sites.

Pseudomonas can infect almost every site within the body, but it is most prominently a problem in wounds and the respiratory tract.

The major human pathogen is Haemophilus influenza. It is an encapsulated gram-negative cocco-bacilli that causes pneumonia, especially in patients with chronic lung disease (i.e COPD).

Campylobacter is one of the most common causes of food poisoning within the UK, often from contamination of raw chicken. In rare cases, autoimmune reactions can occur following infections with campylobacter jejuni such as Guillain-Barré syndrome (immune-mediated demyelinating polyneuropathy of peripheral nervous system).

We'd love to hear your feedback on our Gram negative infections notes.