Parkinson’s disease is a chronic, progressive neurodegenerative condition that occurs secondary to loss of dopaminergic neurones within the substantia nigra.

Parkinson’s disease is the most common form of parkinsonism. Parkinsonism describes the presence of bradykinesia and at least one of the following:

Parkinson’s disease tends to present with unilateral symptoms at onset with gradual progression and the development of bilateral signs. In addition to the motor symptoms, non-motor complications like depression, dementia, sleep disturbance and autonomic dysfunction cause significant ill-health. 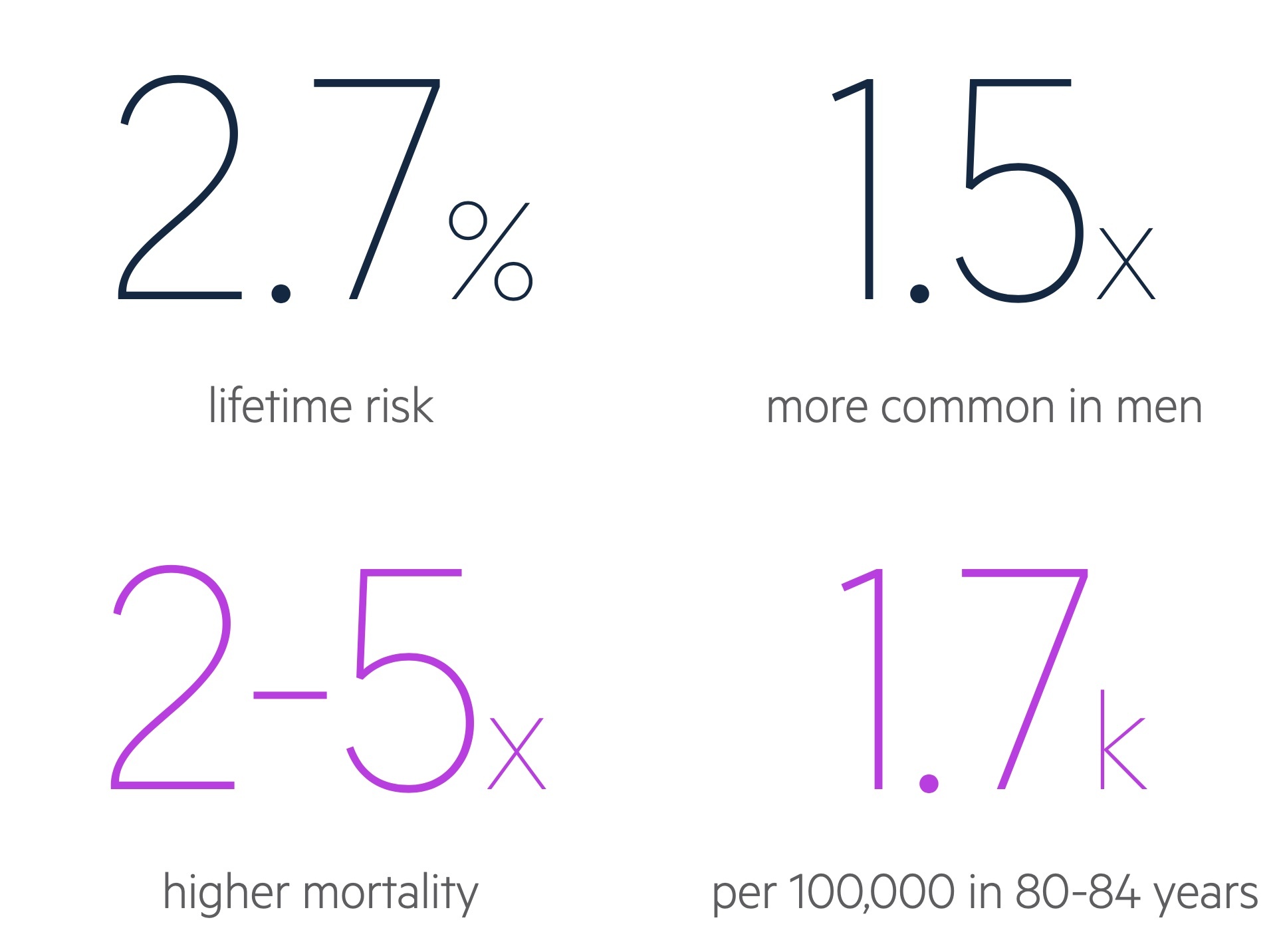 Parkinson’s disease is one of the most common neurological disorders, it has a lifetime risk of 2.7%.

Parkinson’s disease is slightly more common in men (1.5:1) and the overall prevalence is thought to be increasing, with a projected rise of 27% between 2009 and 2020 in the UK.

The onset of Parkinson’s disease usually peaks between the ages of 55-65 years and generally has a slowly progressive onset.

The basal ganglia are collections of nuclei found in the subcortical white matter.

The basal ganglia describe a series of cell bodies (i.e. gray matter) that are located together within the deep subcortical white matter of the brain.

The thalamus, though not formally considered part of the basal ganglia, forms extensive connections with the nuclei. 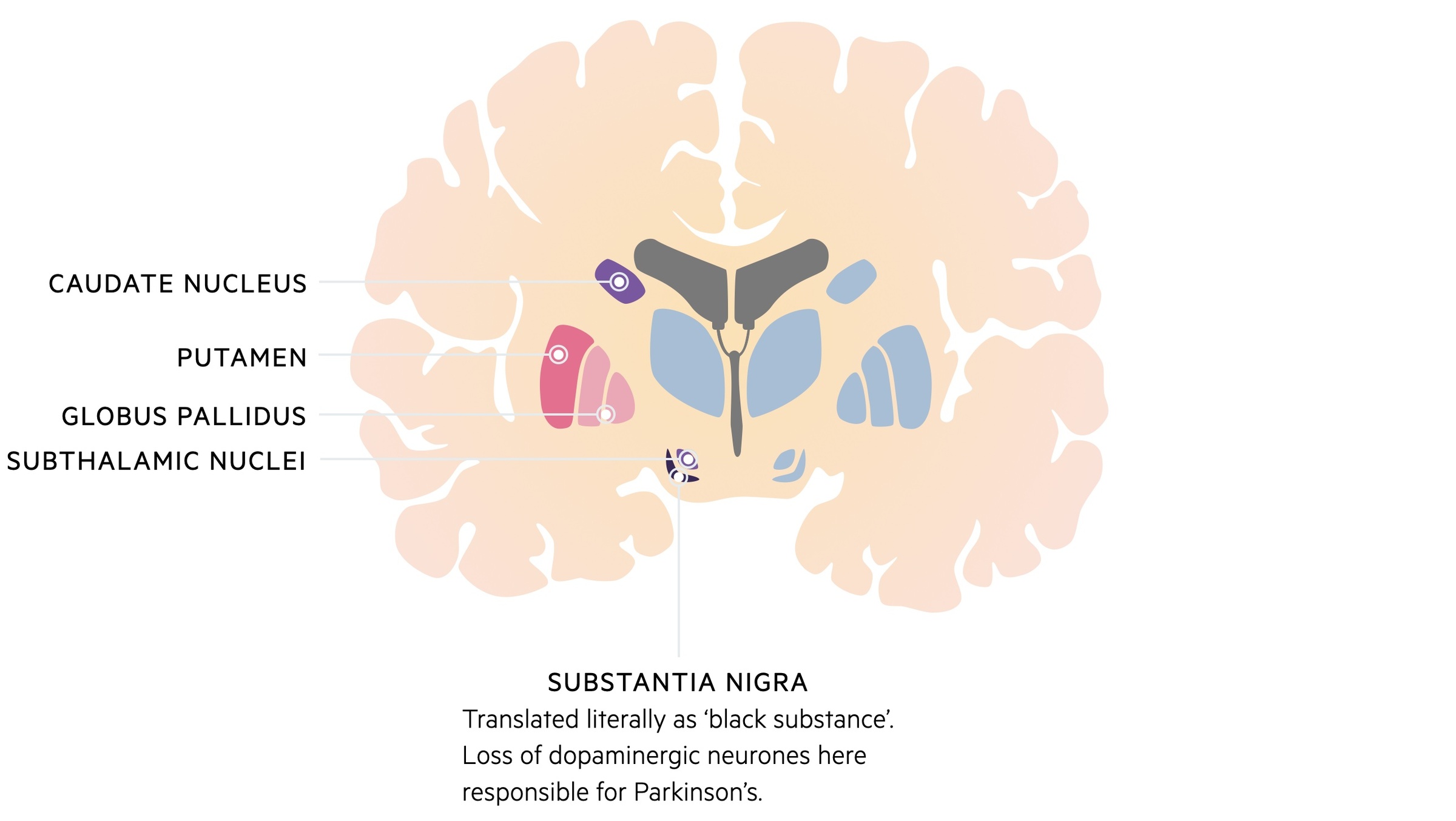 The basal ganglia have a number of important roles in movement generation. In simple terms, it helps to kick start and fine tune movement initiated by the motor cortex in a coordinated manner.

Some of the important functions of the basal ganglia include:

Parkinson’s disease is a condition of idiopathic aetiology.

It is thought that a small proportion (approx 2-3% ) of cases of Parkinson’s disease can be attributed to a monogenic cause (i.e. a single gene variant causing the disease).

In the majority of cases the aetiology is largely unknown and probably related to a complex interaction between a patients genetics and their environment.

Parkinson’s disease may not be apparent until a substantial number of neurones (50-80%) have been lost within the substantia nigra.

The basal ganglia are essential for the modulation of pyramidal motor output to allow normal movement. This process of modulation is dependent on two pathways within the substantia nigra, the direct and indirect pathways.

The direct pathway is mostly a stimulatory pathway (‘on’ pathway) that is shorter, mostly off and predominantly associated with D1 receptors.

The indirect pathway is mostly an inhibitory pathway (‘off’ pathway) that is longer, mostly on and predominantly associated with D2 receptors.

Activation of the indirect pathway is essential in the inhibition of muscular tone to prevent unnecessary movement. Dopamine that is released from the substantia nigra via dopaminergic neurones is able to inhibit the indirect pathway via D2 receptors therefore leading to the generation of movement (i.e. inhibiting the inhibitor)

Collectively, this shows how the release of dopamine may act on both the direct and indirect pathway to lead to a ‘kick-start’ in movement generation. Importantly, this process is fine-tuned to allow coordinated movement when it is needed by close interaction with the motor cortex via corticonigra fibres.

It is therefore unsurprising that in Parkinson’s disease there is a problem with the initiation of movement. 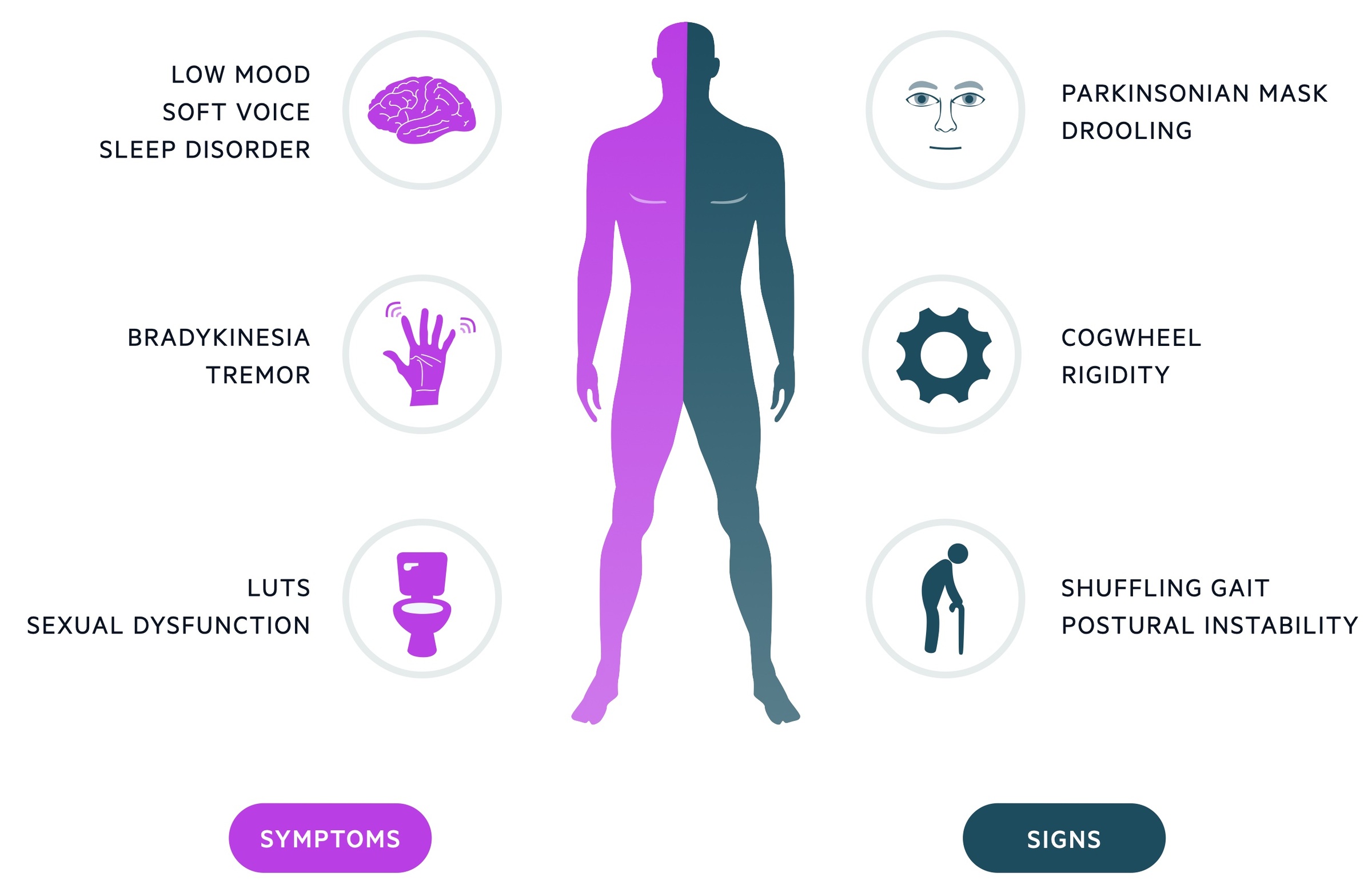 Parkinson’s disease is a clinical diagnosis and should be suspected based on the presence of bradykinesia and one or more of the other major features of parkinsonism.

Patients suspected of Parkinson’s disease based on the clinical features should be referred to specialist for assessment and diagnosis. Parkinson's disease may be diagnosed using the UK Parkinson's Disease Society (PDS) Brain Bank Clinical Diagnosis Criteria.

Step 1 involves the identification of features of parkinsonian syndrome.

Bradykinesia and one of the following:

Step 3 involves the identification of supportive criteria of Parkinson’s disease.

Three or more of the following:

This diagnostic criteria follows a similar methodology to the UK brain bank criteria for reaching a diagnosis.

The diagnosis of clinically established PD is based on:

The diagnosis of clinically probable PD is based on:

Parkinson’s disease is considered an idiopathic cause of parkinsonism.

The main differential diagnoses for Parkinson's disease include other causes of parkinsonism, which described the presence of bradykinesia associated with one or more features from tremor, rigidity and postural instability.

There are numerous causes of parkinsonism, which can be broadly divided into four groups to aid memory: idiopathic Parkinson’s disease, drug-induced, other medical pathology and the Parkinson-plus syndromes.

The Parkinson-plus syndromes are a group of conditions that may be mistaken for Parkinson’s disease.

Generally, they affect a wider area of the nervous system resulting in more complex disease and atypical presentations. Survival is greatly reduced in these syndromes compared to Idiopathic Parkinson’s disease.

MSA is an adult-onset, rapidly progressive disease that is characterised by profound autonomic dysfunction leading to severe postural hypotension, urogenital dysfunction and a plethora of other features including cerebellar and corticospinal features. There is a poor response to treatment.

PSP is a neurodegenerative disorder that typically begins at age 50-60 years and is characterised by vertical gaze dysfunction, dysarthria and cognitive decline. Tremor is rare in this condition.

CBD is a neurodegenerative disorder that is characterised by a progressive dementia, parkinsonism and limb apraxia. Apraxia refers to problems with motor planning (i.e. unable to wave hello).

In severe cases CBD may be associated with alien limb syndrome when there is a feeling that the limb is acting on its own.

Parkinson’s disease is largely a clinical diagnosis, however, some investigations may be required to rule out an underlying cause.

The important investigation that may be required is neuroimaging (CT/MRI), particularly where there is a strong suspicion of a secondary cause (e.g. cerebrovascular disease) or failed response to treatment.

Positron emission tomography (PET) scanning with fluorodopa is being increasingly use to help localise dopamine deficiency in the basal ganglia. Although it is predominantly reserved for research at present.

The management of Parkinson’s disease should always involve a multi-disciplinary team as patients will need a wide range of care, especially as the disease progresses.

At present, there are no disease-modifying treatments available for Parkinson’s disease. Treatments mainly work by increasing dopamine levels within the brain. The key to managing Parkinson’s disease is to provide symptom control early and for long as possible whilst minimising any unnecessary side-effects. Treatment should be initiated early following diagnosis.

We will mainly be focusing on treatment of the motor problems in Parkinson’s disease as this is the predominant feature. However, it is essential to remember that patients will require input from other multi-disciplinary professionals including occupational therapists, physiotherapists and dieticians. Treatment of non-motor symptoms may also be required including, for example, constipation (e.g. laxatives), excessive tiredness (e.g. modafinil) or bladder dysfunction (e.g. catheter).

The main options for the initial management of Parkinson’s disease include Levodopa, dopamine agonists, or monoamine oxidase B inhibitors (MAO-Bs).

Levodopa provides the best relief of symptoms with fewest short-term side-effects, however, long-term significant motor complications can occur. This complications can be difficult to control. Consequently, younger patients are often given dopamine agonists in the early stages of treatment.

Dopamine agonists (e.g. ropinirole, pramipexole) work by binding to post-synaptic dopamine receptors. They provide moderate relief of symptoms, can be used in early disease and have less long-term side-effects compared to levodopa. Dopamine agonists are themselves associated with side-effects and one particular issue is the development of impulse-control disorders.

MAO-B inhibitors can also be selected as initial therapy in the treatment of Parkinson’s disease. Rasagiline, a MAO-B inhibitor, works through inhibition of the enzyme monoamine oxidase, which is involved in the breakdown of monoamines, such as dopamine, within the in pre-synaptic neurone. This means more dopamine is available for ordinary function.

Many patients with Parkinson’s disease will require additional therapy to help control their motor symptoms and will be unable to continue monotherapy. This may mean a combination of the medications previously described (e.g. levodopa, dopamine agonists) or other medications including COMT inhibitors, anti-muscarinics, amantadine or apomorphine.

COMT inhibitors (e.g. Entacapone) inhibit the peripheral breakdown of levodopa by the COMT enzyme allowing more levodopa to cross the blood brain barrier. Therefore, this is an adjuvant therapy in those on levodopa (combination drugs are available).

Anti-muscarinics (e.g. procyclidine) may be used although evidence is poor. Amantadine may be used as early monotherapy or late adjuvant to help with dyskinesia.

Apomorphine, which is a non-selective dopamine agonist, is generally reserved for advanced disease. It is given via subcutaneous injection/infusion, but can cause significant postural hypotension.

There are a number of surgical options that are available for patients in specialist centres that can include thalamic or subthalamic surgery, however, the most commonly used approach is deep brain stimulation.

Deep brain stimulation involves placing electrodes into the basal ganglia that are attached to an internal stimulator. It can reverse akinesia, rigidity and tremor but major complications include intracerebral haemorrhage and confusion.

We'd love to hear your feedback on our Parkinson's disease notes.