Transient ischaemic attack is a cerebrovascular event that is caused by abnormal perfusion of cerebral tissue.

TIA is defined as transient neurological dysfunction caused by focal brain, spinal cord, or retinal ischaemia, without evidence of acute infarction. It is a medical emergency, within the first week following a TIA, the risk of stroke is up to 10%. The estimated incidence of TIA within the UK is 50 per 100,000 people per year.

Traditionally, transient neurological dysfunction with resolution within 24 hours was diagnostic of TIA. However, up to a third of patients whose symptoms have resolved within 24 hours have evidence of infarction on imaging. Consequently, the definition is now 'tissue-based' rather than 'time-based' with the incoporation of the phrase ‘without evidence of acute infarction’. Thus, the end-point is biological tissue damage, not an arbitrary time cut-off.

TIA is caused by temporary blockage to blood flow, which leads to ischaemia.

Ischaemia refers to the absence of blood flow to an organ, which deprives it of oxygen. Cerebral ischaemia may be due to in situ thrombosis, emboli, or rarely, dissection.

During a TIA, there is a transient reduction in blood flow to an area of cerebral tissue that causes neurological symptoms. TIA commonly occurs secondary to embolisation from atrial fibrillation or carotid artery disease.

Risk factors for TIA are due to conditions that affect the integrity of vessels or increase the risk of embolisation.

TIA is a cardiovascular disease, and as such, it shares many common risk factors with conditions such as ischaemic heart disease and peripheral vascular disease.

A TIA presents with sudden, focal neurological deficit that reflects the area of the brain devoid of blood flow.

A variety of neurological deficits can present in TIA, but the majority of symptoms will resolve within 1-2 hours.

This is a classical syndrome of short-lived monocular blindness, which is often described as a black curtain coming across the vision. It is a term usually reserved for transient visual loss of ischaemic origin.

The principle cause of amaurosis fugax is transient obstruction of the ophthalmic artery, which is a branch of the internal carotid artery. However, other ischaemic causes to consider include giant cell arteritis (i.e. temporal arteritis) and central retinal artery occlusion. An important differential of transient visual loss, particularly in young patients, is migraine.

Any patient with ongoing symptoms requires urgent referral to a stroke unit.

TIA is a clinical diagnosis based on the history as the majority of patients will have complete resolution of symptoms. Any patient with ongoing symptoms needs to be treated as an acute stroke and urgently referred to a stroke unit.

Key aspects to making the diagnosis of TIA include:

A rapid diagnostic screen to assess for features of TIA/stroke used in the community. Anyone with a positive screen should be assessed urgently at a stroke unit. The test is positive if any of the following are met:

Numerous conditions can present similarly to TIA, which are collectively referred to as ‘stroke mimics’.

All patients with a suspected TIA should be referred to a specialist TIA clinic and be seen within 24 hours.

At the TIA clinic, patients should have a comprehensive medical assessment including blood tests, electrocardiogram (ECG) and imaging. If the episode occurred > 1 week ago, the assessment should be within 7 days.

The ABCD2 is a prognostic score that was traditionally used to identify people at high risk of stroke after a TIA score. It was originally used to triage the urgency of TIA referrals and treatment with aspirin. NICE no longer recommend its use. 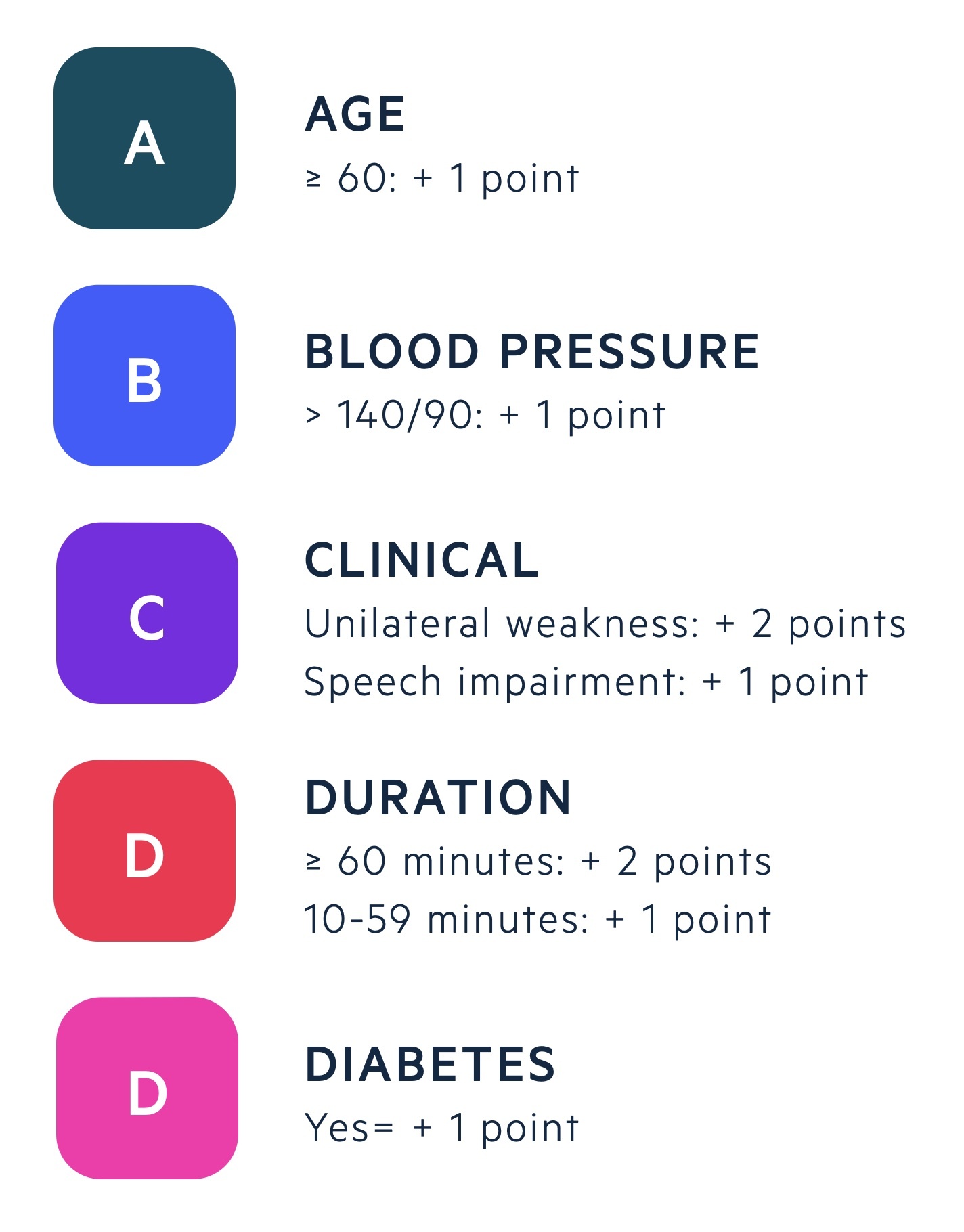 MRI is the key investigation in a patient with suspected TIA.

Certain features warrant urgent admission to hospital because of the high risk of stroke, bleeding or deterioration.

Any patient with ongoing symptoms needs to be treated as an acute stroke and urgently referred to a stroke unit.

Any patient with a suspected TIA should be treated with 300 mg of aspirin unless contraindicated.

The management of TIA can be divided into acute treatment, secondary prevention and lifestyle measures.

The principle management for TIA is 300 mg of aspirin that is usually continued for two weeks. This is followed by treatment with 75 mg of clopidogrel as long-term vascular prevention.

Basic advice on physical activity, smoking cessation, diet optimisation and alcohol intake should be given to all patients

It is vital to advise all patients to stop driving if they have had a suspected, or confirmed, TIA.

Patients should always be advised to check the DVLA for the most up to date recommendations on driving.

We'd love to hear your feedback on our TIA notes.