Alport’s may demonstrate different inheritance patterns though it is most commonly X-linked due to mutations of COL4A5 on the X chromosome.

The disease affects the glomerular basement membrane (GBM) leading to nephritis. Other features may include sensorineural hearing loss and ocular defects.

Alport’s may arise from a number of mutations to genes responsible for type IV collagen.

The majority of patients are affected by the X-linked form. It occurs due to mutations of COL4A5. Female carriers (i.e. heterozygotes) of the X-linked form are not unaffected due to lyonisation, they have an increased risk of hypertension and renal impairment. Up to 20% will be affected by sensorineural hearing loss.

NOTE: Lyonisation refers to the process of inactivation of one of the X chromosomes on a cellular level in females.

Accounts for around 20-30% of cases. Occurs due to mutations to COL4A3 or COL4A4. Typically has a mild phenotype.

Accounts for around 15% of cases. Occurs due to mutations to COL4A3 or COL4A4, may be associated with parental consanguinity.

There are a number of ocular pathologies seen in patients with Alport’s: 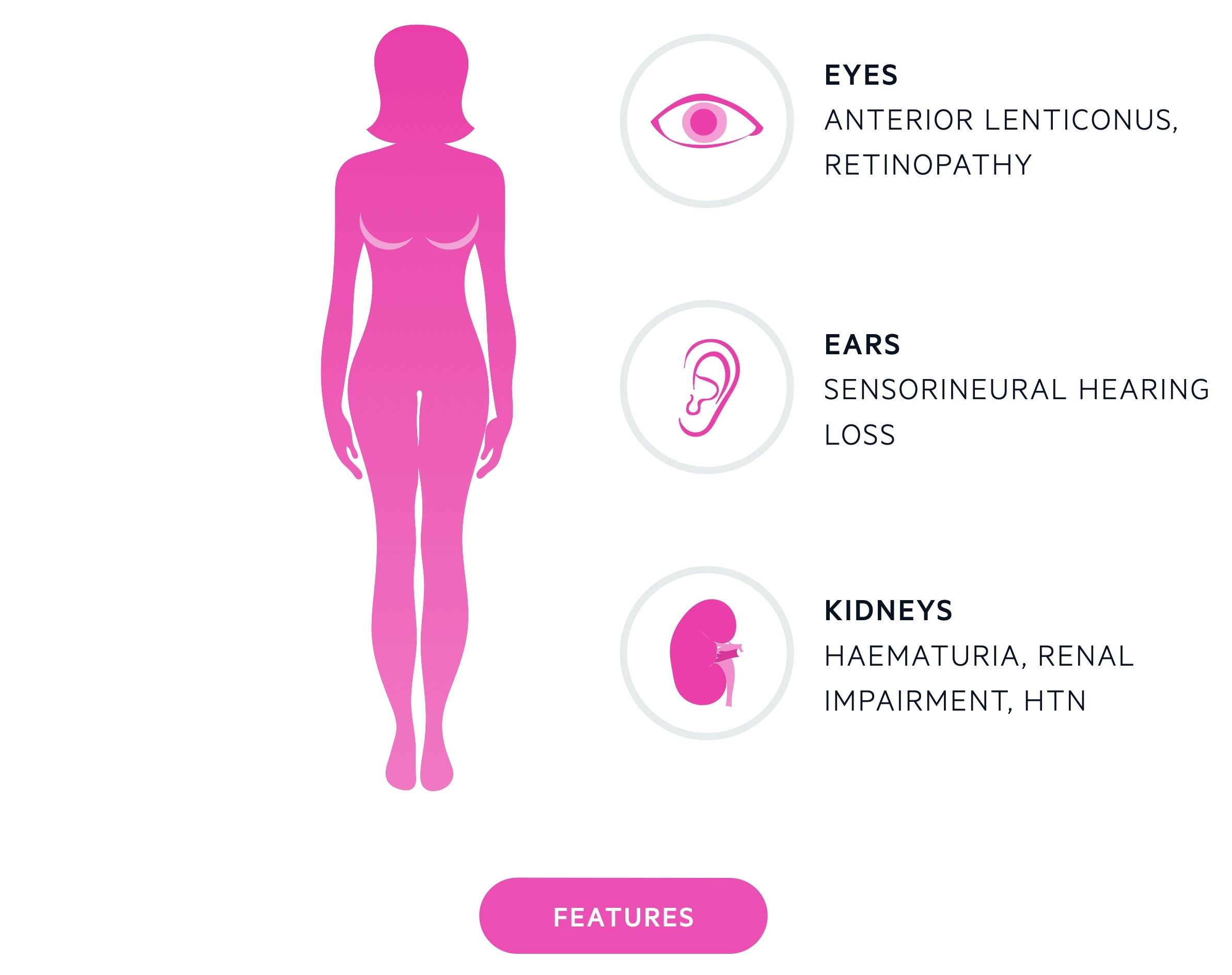 Patients may develop leiomyomas and arterial aneurysms amongst other manifestations.

The diagnosis of Alport’s can be confirmed with genetic testing or biopsy (of the skin or kidneys).

Molecular genetic testing can confirm the diagnosis of Alport’s syndrome and the underlying mutation type.

There are two tissue types that may be biopsied:

Kidney transplant offers a chance of ‘cure’ in patients with Alport’s.

Patients require lifelong care under a nephrologist. Regular monitoring of renal function, proteinuria and blood pressure is required amongst other investigations.

In patients with hypertension and proteinuria, ACE inhibitors are the preferred initial therapy. Genetic counselling should be offered to all patients (including prior to genetic testing).

Transplant offers a chance at a ‘cure’ in patients with chronic kidney disease. Patients typically respond well and it alleviates the need for dialysis.

Though Alport’s cannot recur in the transplant kidney, approximately 1-5% will develop anti-GBM disease.

Patients with sensorineural hearing loss or ocular pathology should be referred to audiology/ENT and ophthalmology. Interventions are typically supportive and may include hearing aids.

We'd love to hear your feedback on our Alport's syndrome notes.