Urinary stones, also termed urolithiasis, refer to stone formation anywhere within the urinary tract. They may be asymptomatic or cause acute loin-to-groin pain due to acute ureteral obstruction.

Stones may occur in the kidney (nephrolithiasis), renal pelvis or ureter (ureterolithiasis). Correct terminology would be ureteric colic, however, this is often used synonymously with renal colic.

Urinary stones are extremely common, with 12% of men and 6% of women estimated to have at least one episode of renal colic within their lifetime. The peak incidence of symptomatic urinary stones is between 40-60 years in males and late 20’s in females.

The most common cause of renal colic is obstruction to urinary flow within the ureter that occurs secondary to urinary stones.

Stones may develop from the supersaturation of urine and/or deposition of stone material within the renal interstitium.

Approximately 80% of urinary stones are composed of calcium. The most common being calcium oxalate, but calcium phosphate is also seen. Other types of stones include struvite (2-15%), uric acid (10%) and cystine (1-2%).

Calcium oxalate is the most common type of stone that is thought to develop from the precipitation of calcium crystals within the interstitium. Accumulation of these crystals leads to the formation of ‘Randall's plaques’, which are subepithelial calcification of renal papillae. They are thought to act as a nidus for stone formation.

The development of calcium oxalate stones is associated with a number of factors. These include high concentrations of oxalate in the urine, loss of natural stone inhibitors (e.g. citrate, magnesium) and high urinary pH.

Struvite stones are composed of magnesium ammonium phosphate. They may grow rapidly and can lead to the development of staghorn calculi, which fill the entire intrarenal collecting system and cause renal dysfunction.

Struvite stones are associated with urease-producing microorganisms including Proteus and Klebsiella. These microorganisms are able to convert urea into ammonia which reacts with water increasing the pH of the urine. Collectively, the increased ammonia and alkaline urine promote stone formation.

Cystine is a homodimer of the amino acid cysteine. The development of cystine stones is usually secondary to the genetic disorder cystinuria, in which there is impairment in the normal renal handling of cystine.

This leads to failed reabsorption of cystine and precipitation within the renal tubules. Patients with cystinuria typically present with stones at a younger age. 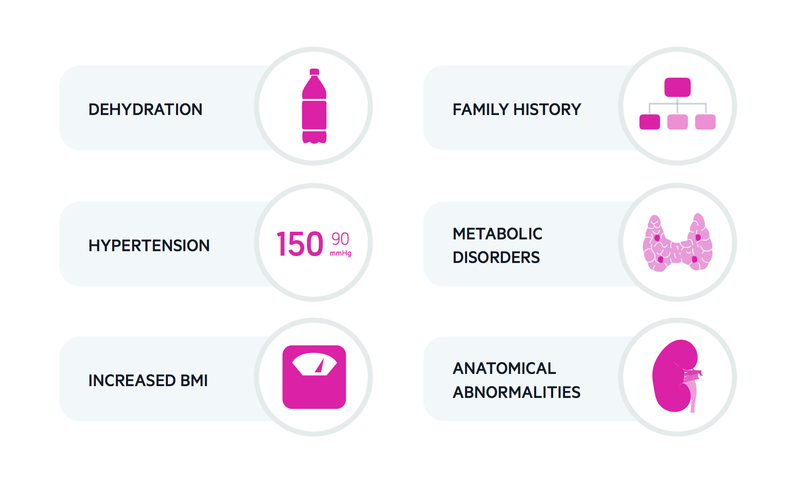 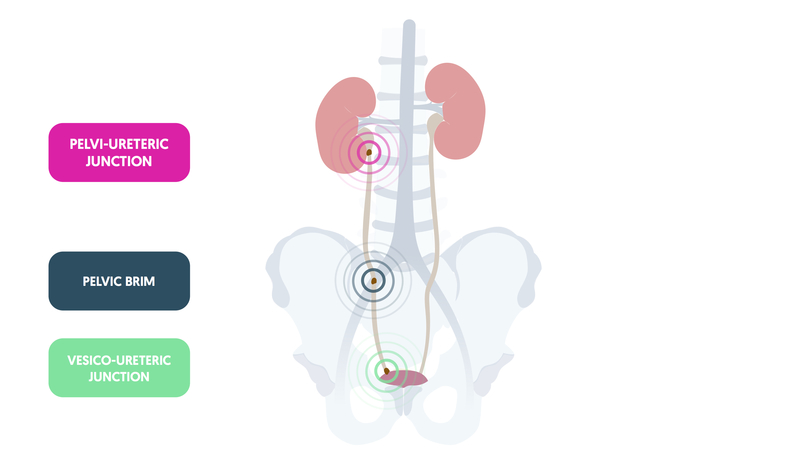 The obstruction to flow within the ureter leads to the release of prostaglandins. Prostaglandins cause vasodilatation of surrounding vessels and stimulate ureteric smooth muscle spasm.

Blood vessel vasodilatation promotes a natural diuresis, which further places pressure on the kidney and can lead to distention of the renal capsule. Distention of this capsule causes the intense pain of renal colic, which is further exacerbated by ureteric smooth muscle spasm.

Renal colic occurs in paroxysms of 20-60 minutes and can be extremely intense requiring parenteral analgesics. Renal colic pain usually settles quickly following relief of the obstruction (e.g. by a stent) or passage of the stone.

The classical presentation of renal colic is loin-to-groin pain.

In older patients with new-onset loin-to-groin pain and no history of stone disease, it is important to rule out a ruptured abdominal aortic aneurysm (rAAA), which can mimic a number of conditions.

It is important to monitor observations (e.g HR, BP, RR, Temp) and look for signs of infection as this could represent the development of urosepsis and AKI, which may require urgent urological management. 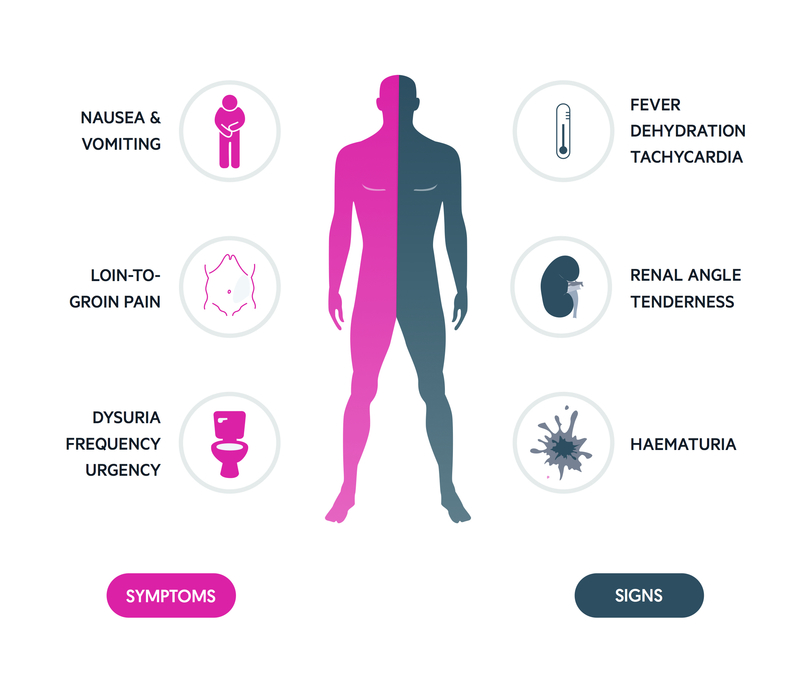 The imaging of choice in the diagnosis of acute renal colic is a non-contrast computed tomography (CT) scan.

A non-contrast CT KUB (kidneys-ureters-bladder) can be used to help identify both stones and urinary tract obstruction. They have a sensitivity in the high 90’s and have the benefit of being readily available and easily interpreted in a short space of time.

Importantly, non-contrast CT does not expose the patient to IV contrast, which can be nephrotoxic.

Other potential investigations that can be completed to aid the diagnosis include:

Ultrasonography can be reserved for patients where there is a risk of using ionising radiation (e.g. pregnancy). It is useful for the identification of hydronephrosis, and may be used to look for stones and other gross abnormalities.

Ultrasound is suited for picking up large, proximal stones (e.g. > 5mm at the PUJ). It is difficult to visualise small, distal stones.

Most urinary stones are composed of calcium, which makes them radio-opaque to plain radiograph. X-rays are inexpensive and quick ways of assessing stone size, composition, location and overall burden.

Although X-ray KUB’s have largely been superseded by non-contrast CT, they still have an important role in the assessment of JJ stent placement in stone management.

A small number of stones (e.g. uric acid, indinavir-induced, cystine) are considered radiolucent, which cannot be detected on X-ray. Interestingly, indinavir-induced renal calculi are not visualised on non-contrast CT and require the use of contrast-enhanced CT (e.g. CT urogram).

Investigations are important for the basic workup of renal colic, diagnosis, assessment of complications and preparation for any surgical intervention.

A metabolic stone workup can be completed in patients with significant stone disease. This involves a number of blood tests and 24-hour urinary profiles looking for an underlying cause.

Some indications for a metabolic stone workup include:

In the majority of patients, renal colic can be managed conservatively with the use of analgesia and hydration.

In general, the management of renal colic is dependent on the size and location of the stone. The larger (e.g. > 10mm) and more proximal (e.g. PUJ) the stone, the more likely intervention will be needed.

In all patients, appropriate analgesia and hydration are important in the ongoing management. Urgent urological assessment should be considered in the following circumstances:

NSAIDs are considered excellent for pain relief in renal colic as they help to reduce the ureteral spasm. They should be used with caution in patients with an AKI or at risk of GI bleeding.

Intramuscular diclofenac can be given for rapid pain relief. Oral or rectal preparations can be given for less severe pain. If patients are not suitable for an NSAID then they should be managed with opiates (e.g. dihydrocodeine, tramadol, morphine).

Anti-emetics (e.g. metoclopramide or cyclizine) can be used to help control nausea and vomiting.

Medical expulsive therapy involves the use of medications, such as alpha-blockers (e.g. tamsulosin) to help induce spontaneous passage of the stone.

This type of therapy can be considered in patients with small (e.g. < 10 mm) distal stones, controlled symptoms and no evidence of sepsis.

Definitive management of urinary stones depends on the size of the stone, site of obstruction and the clinical presentation.

Therapeutic options for the management of urolithiasis include:

We'd love to hear your feedback on our Renal colic notes.