Ventilation is the process by which air (or other gases) is moved in and out of the lungs to facilitate gas exchange. Lung function tests allow us to measure the volume and flow of inhaled gases. An understanding of these tests and what they show, both in health and disease, aids clinicians in the diagnosis of respiratory (and related) disease.

The volume of air during inspiration and expiration, at different levels of exertion, can be categorised into lung volumes. These volumes are highly dependent on height, weight, gender, age and ethnicity, we will give average values for healthy young people. 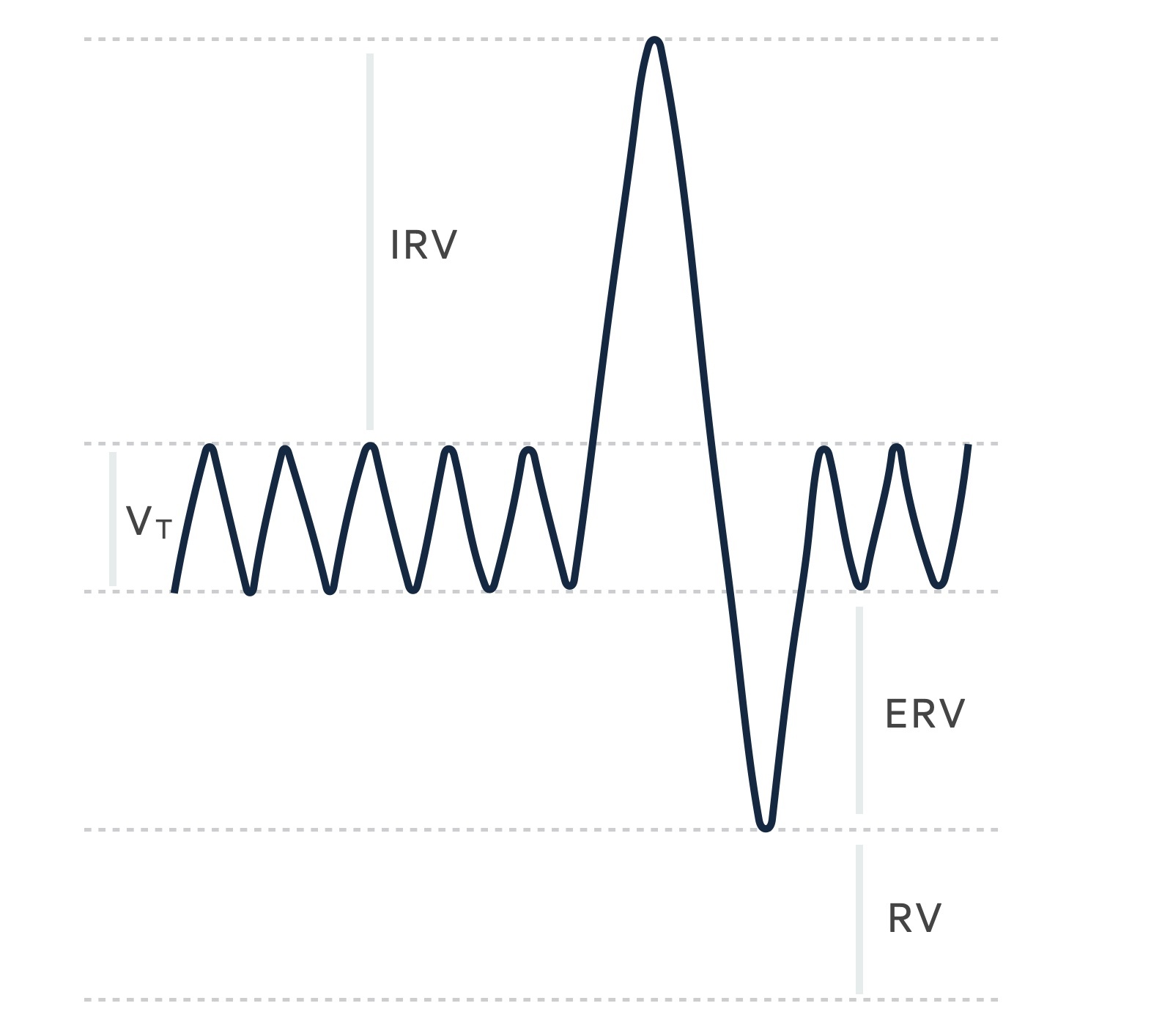 The above graph can be a little difficult to interpret at first glance. It shows the result of monitoring volume changes during breathing. As the patient inspires the graph goes up and as they expire it goes down. The tidal volume (VT) is seen as the central wave and represents normal gentle breathing. The sharp upward deflection represents the patient inspiring with maximal effort, filling the lungs, the sharp downward deflection represents maximal expiration leaving only the residual volume in the lungs.

Lung volumes may be combined to give capacities: 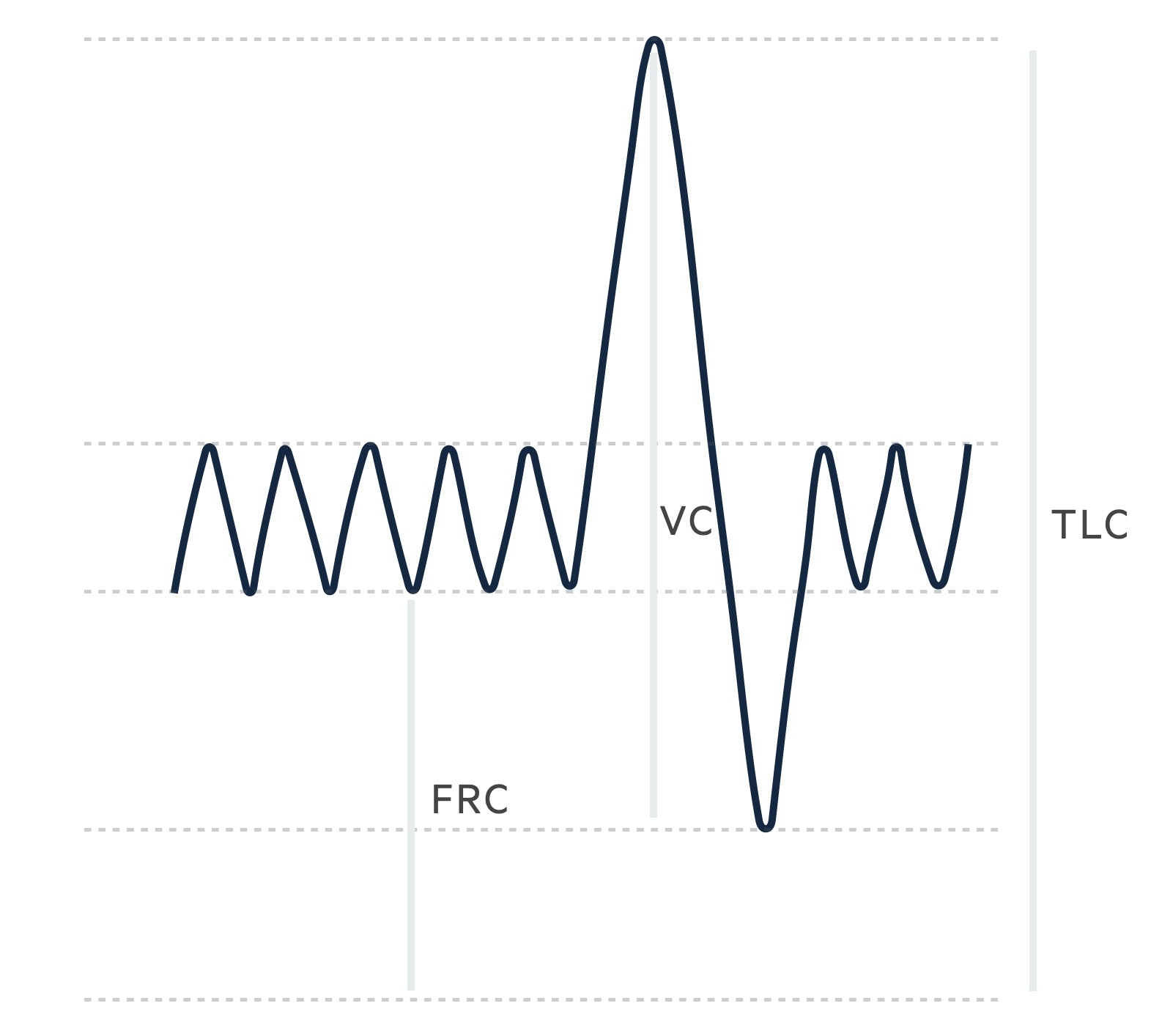 A peak flow is a simple test of the peak flow rate during forced expiration following maximal inspiration.

Patients are instructed to expire, as hard and fast as they can, into the device. They are normally given three attempts with the best value recorded. Results must be corrected to normal values for a patient's age and gender. Normal values peak in the third decade for men and women (slightly earlier peak in women) before falling as we age.

Peak flow demonstrates diurnal variation. Flow tends to be highest in the afternoon and lowest in the early hours. It is, on average, higher in men (light blue) than women (dark blue). Peak flow also varies significantly with height. A healthy young man may expect a peak flow of 600-660 L/min, while a woman may expect a value of 420-460 L/min. 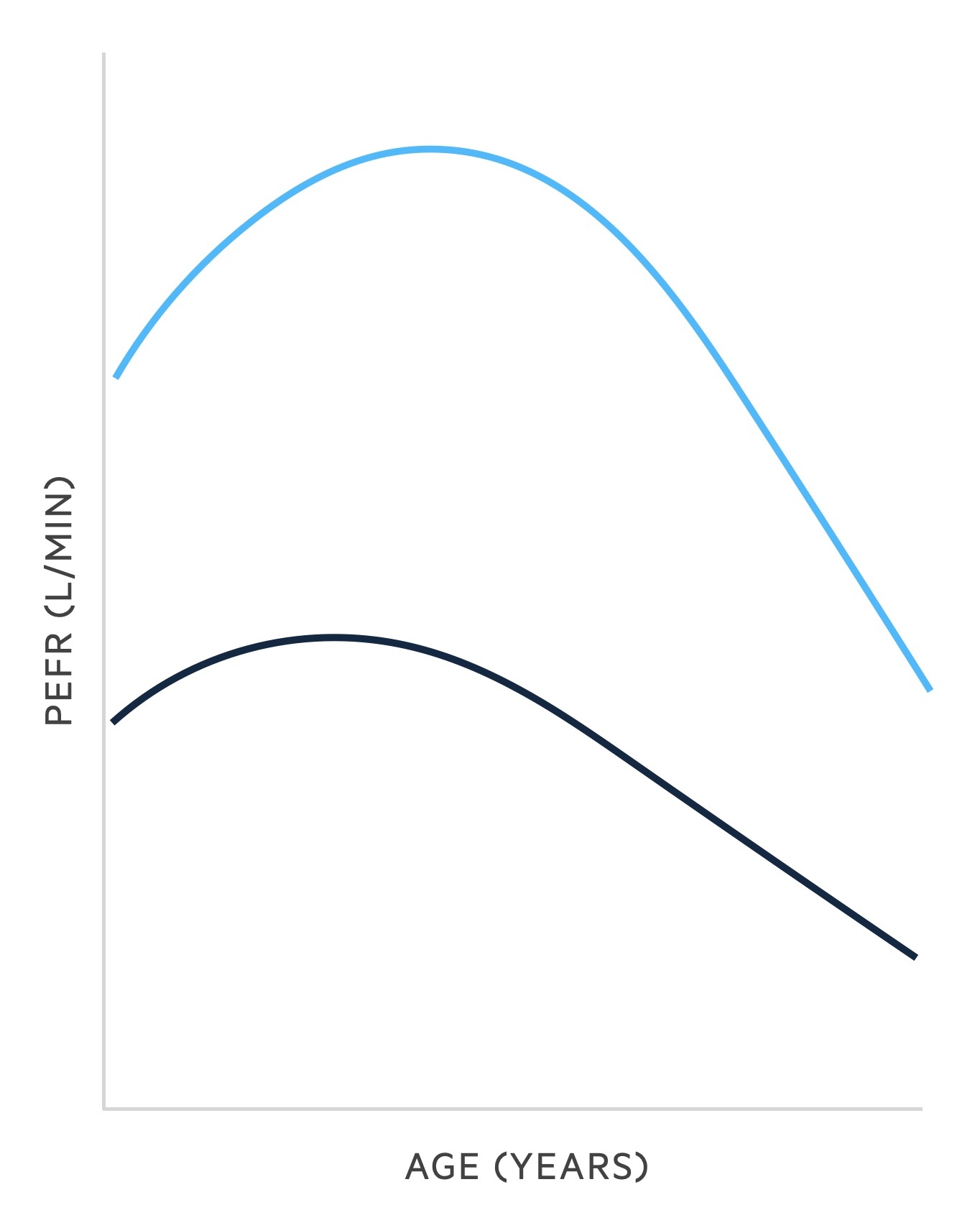 The diagnostic value of peak flow is limited due to a wide range of normal values. Results may only drop after significant disease has developed.

However, it may be used to:

Spirometry is a relatively straightforward procedure that can be completed quickly. It involves the patient taking in a deep breath to fill the lungs (maximal inspiration), followed forceful expiration - attempting to expire the air as quickly and for as long as possible into the mouthpiece of a spirometer.

During spirometry, the following is measured: 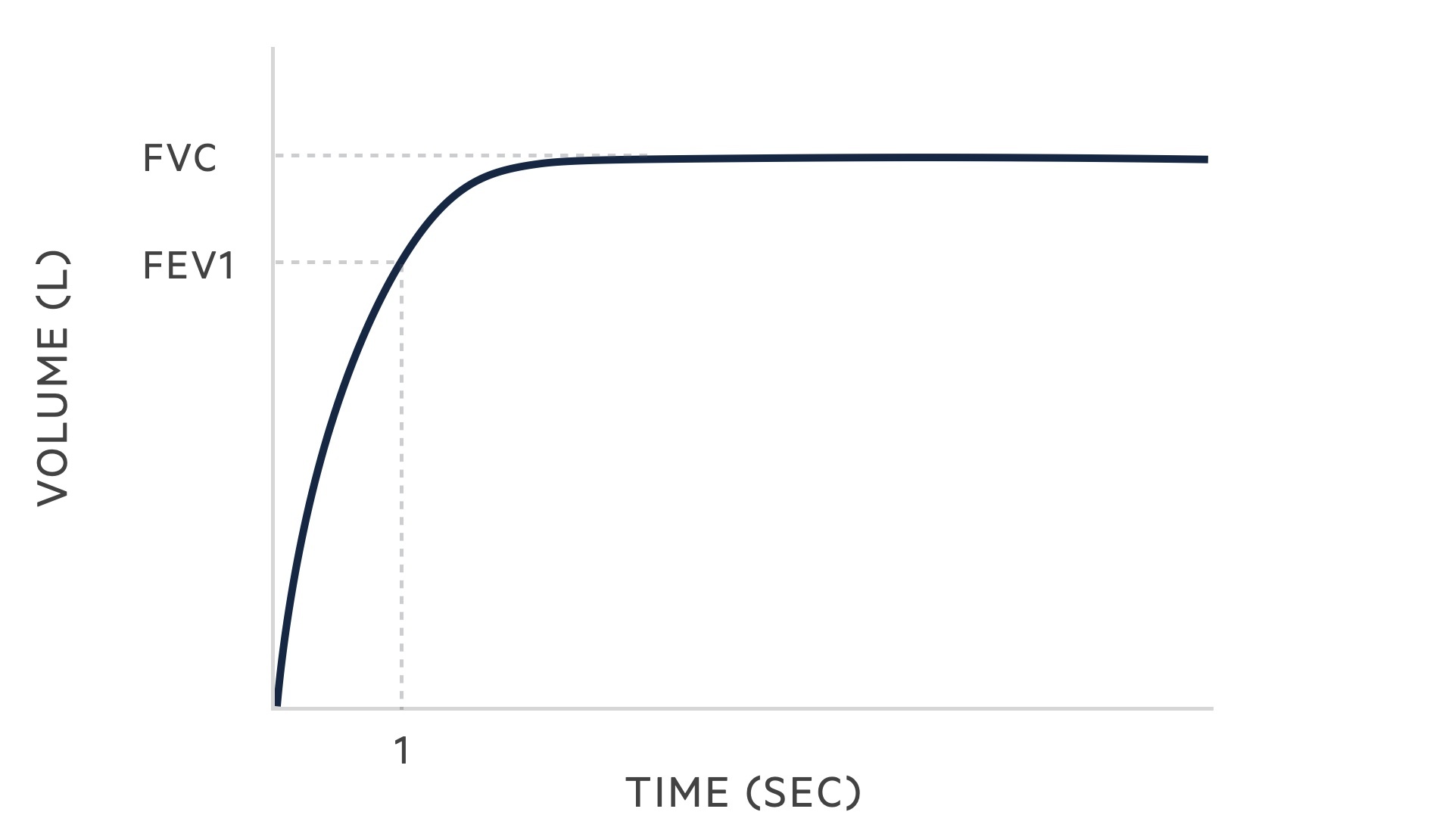 Spirometry is an extremely useful and commonly completed test, it helps us distinguish between obstructive and restrictive lung diseases.

In obstructive lung disease, there is an increase in airway resistance and a decrease in the expiratory flow. Increased resistance may be secondary to airway inflammation and secretions, bronchospasm and/or reduced elastic recoil.

As such obstructive lung diseases are characterised by a greater reduction in the FEV1 than in the FVC, as such the FEV1/FVC ratio is < 70%.

The following changes are seen in obstructive lung disease: 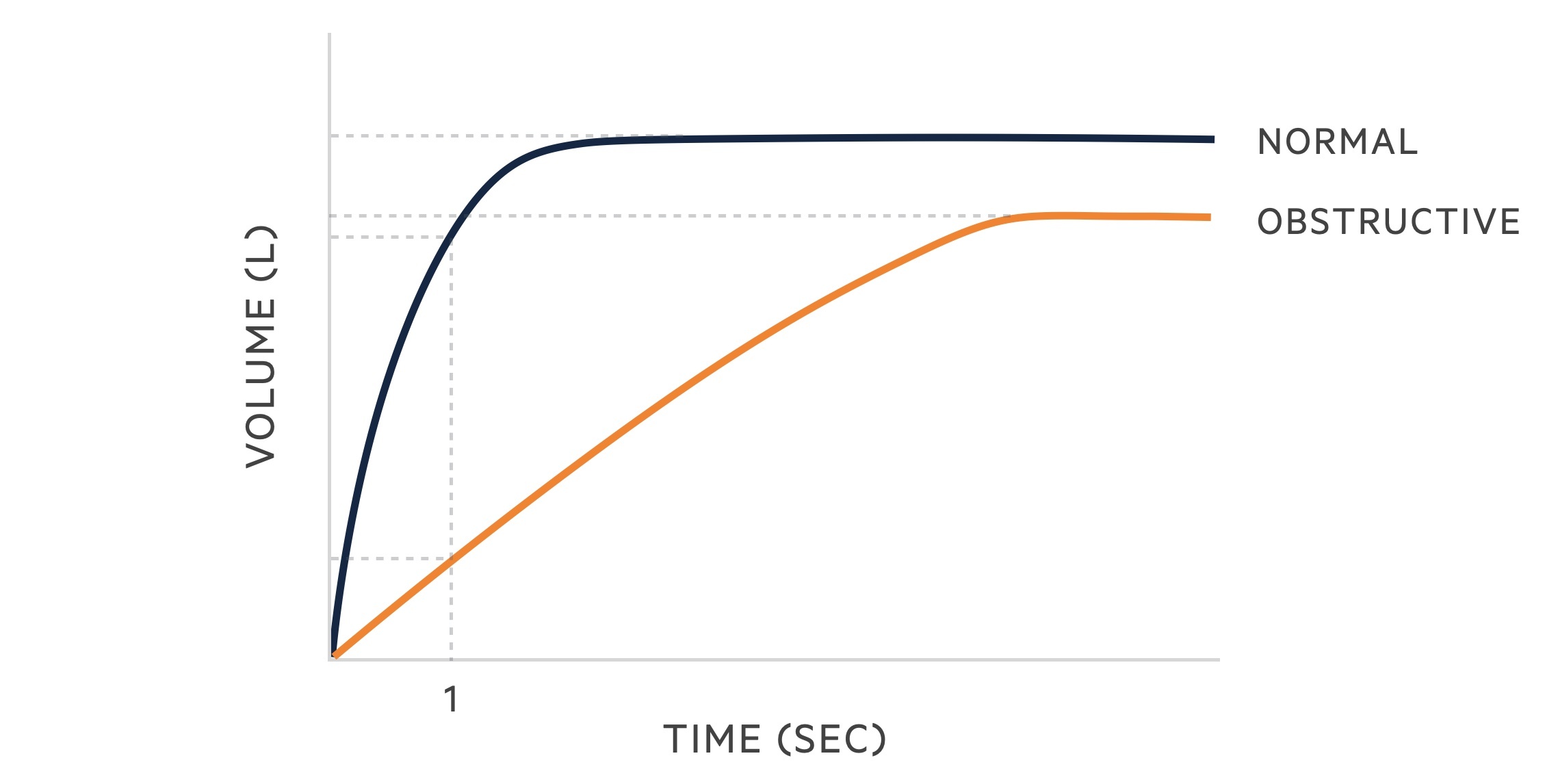 In patients with an obstructive picture on spirometry, reversibility testing may be used. Reversibility testing involves the adminstration of bronchodilator therapy and then repeating spirometry. Significant reveribility increases the chances of asthma being the correct diagnosis, though this can also be seen in COPD at times.

The following changes are seen in restrictive lung disease: 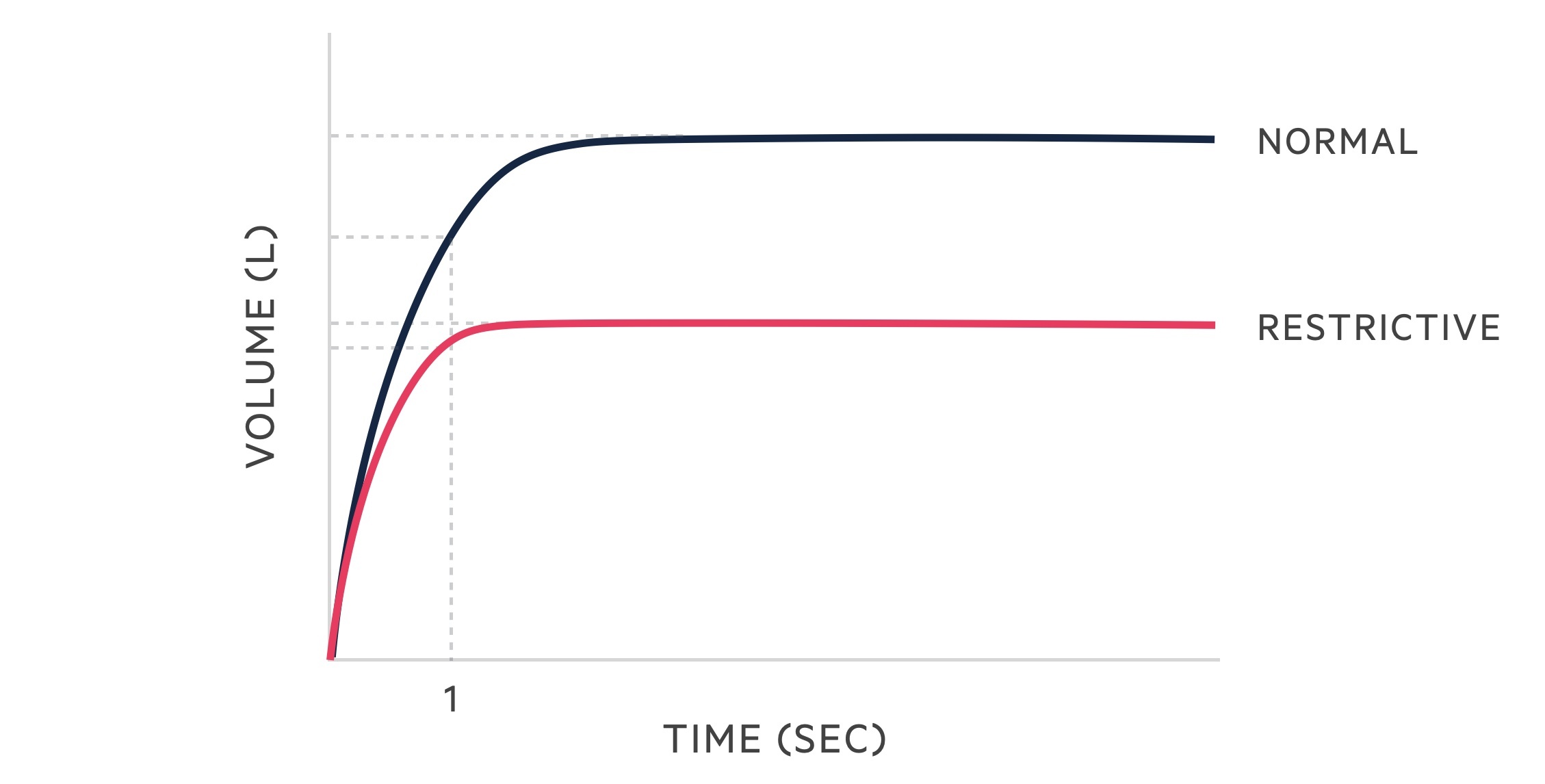 A flow-volume loop plots the flow and volume changes that occur during inspiration and expiration. 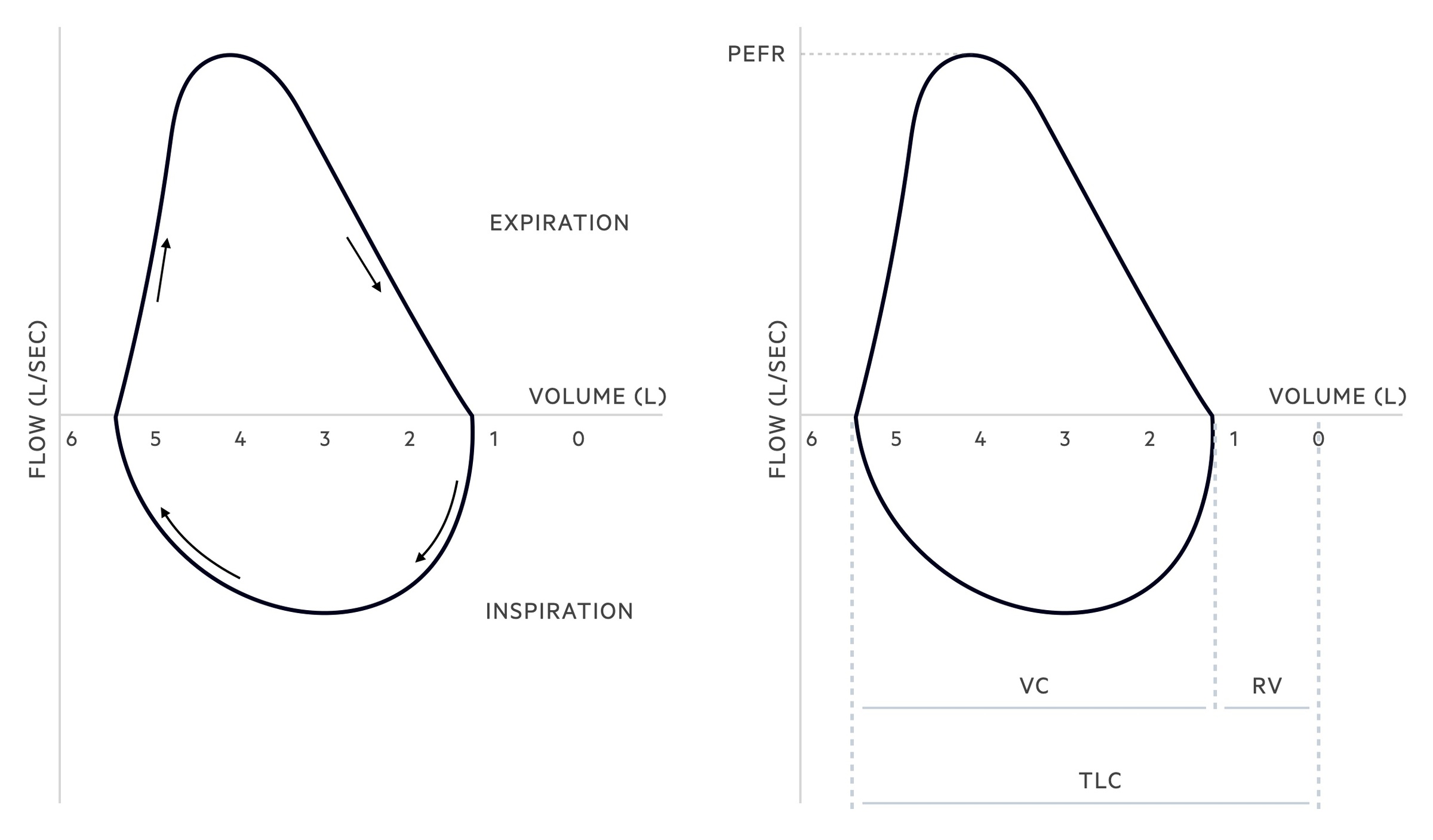 In obstructive lung disease, there is an increase in airway resistance and a decrease in the expiratory flow. Increased resistance may be secondary to airway inflammation and secretions, bronchospasm and/or reduced elastic recoil. 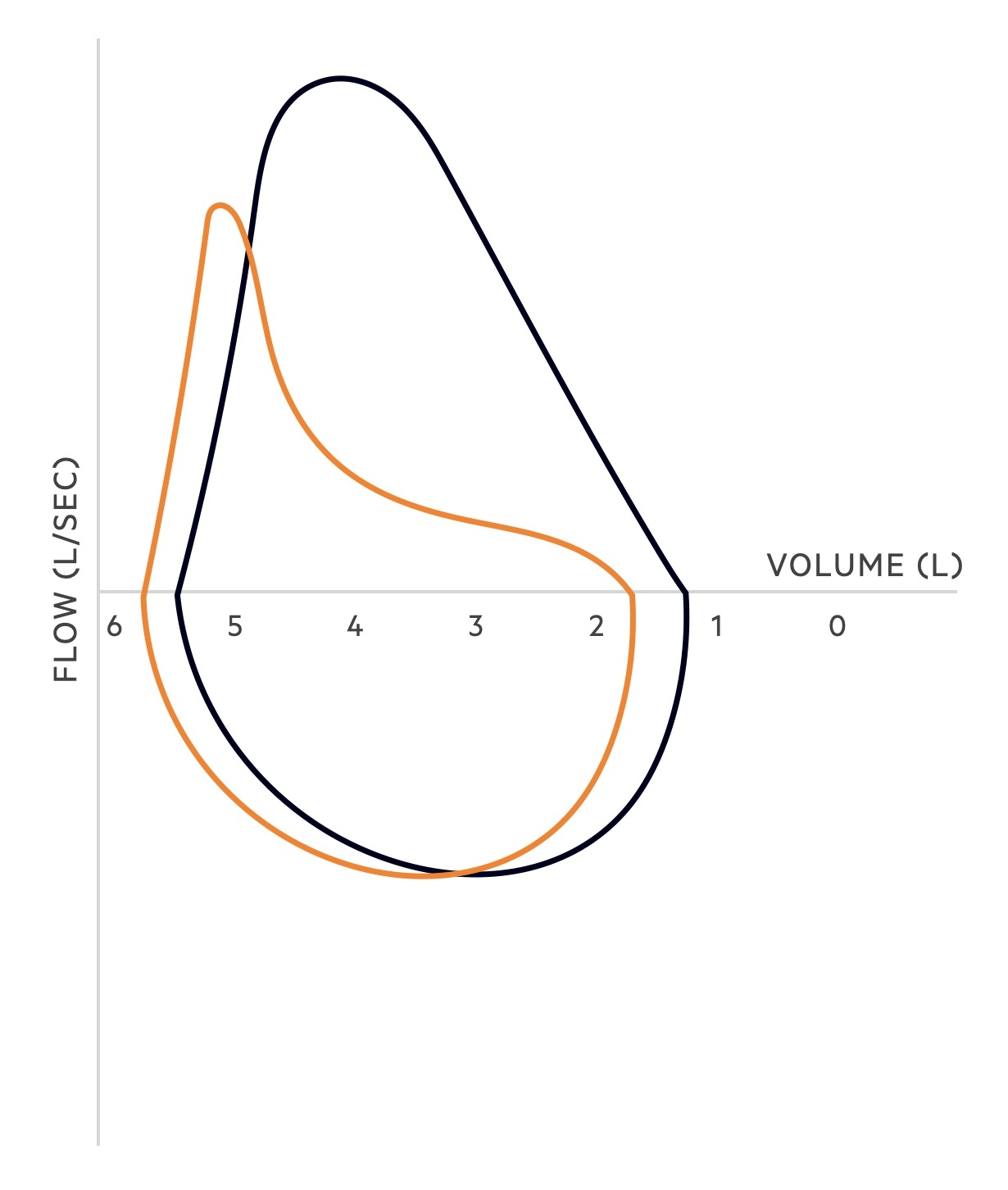 In restrictive diseases, the airways are not obstructed but lung capacity is limited. Elastic recoil may be increased causing supra-normal expiratory flow.

Total lung capacity and vital capacity are reduced. Residual volume may be normal but is frequently reduced. 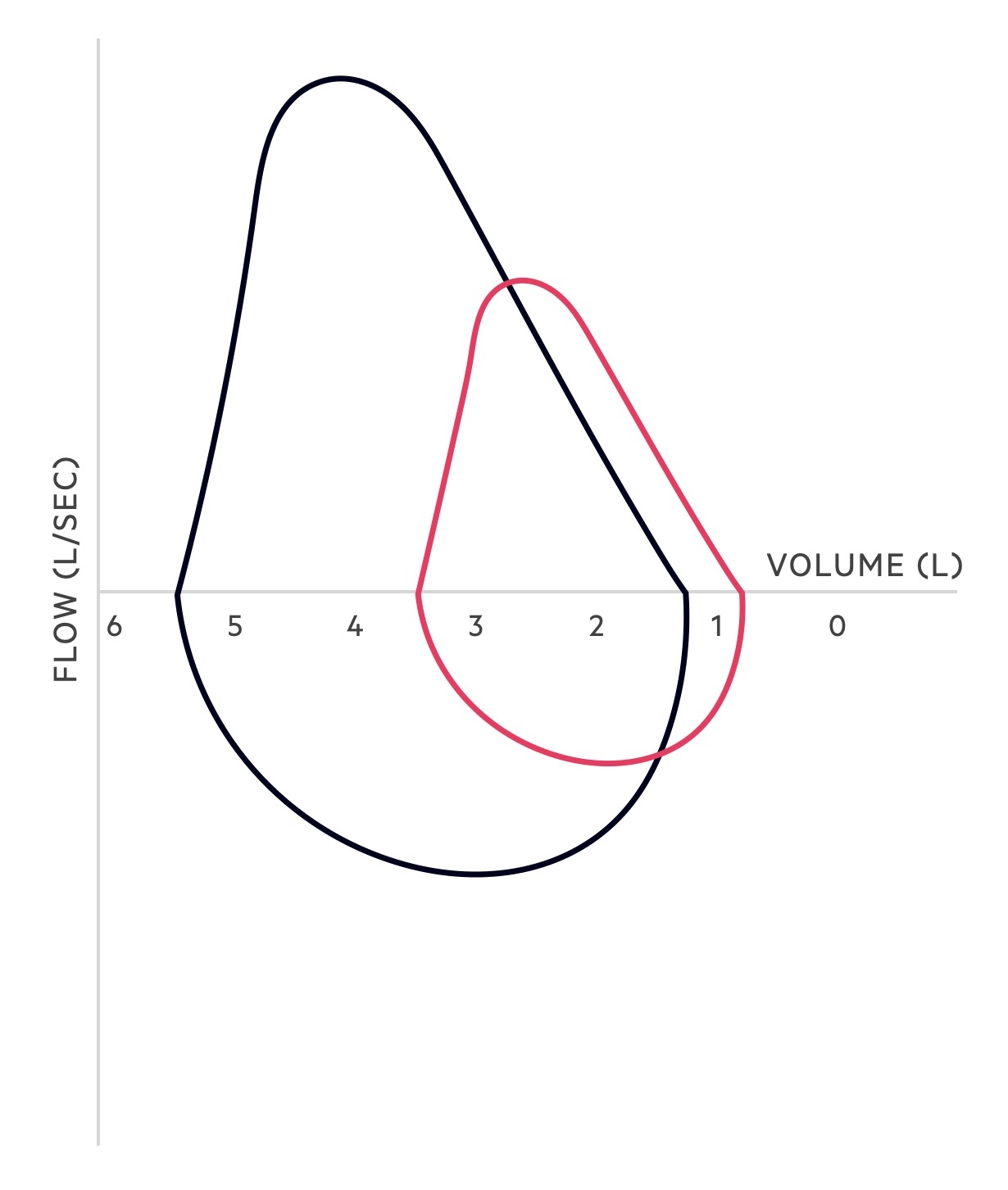 We'd love to hear your feedback on our Lung function tests notes.