The basics of ventilation are simple. To inspire, the intrathoracic pressure must be below that of atmospheric pressure. The reverse must be true in order to expire.

There are two mechanisms by which we may change the intrathoracic volume (and therefore pressure):

The muscles of the neck, thorax and abdomen all contribute by causing changes to the volume and, therefore, pressure within the thoracic cavity. Normal breathing, eupnoea, involves the diaphragm and intercostal muscles while forced breathing (during exercise or in disease) requires accessory muscles. This note covers key muscles involved in respiration, it should not be considered an exhaustive list of the muscles involved.

The diaphragm and the external intercostals are the muscles primarily responsible for inspiration. Additional muscles are recruited in active respiration.

Quiet inspiration is a function of two muscles:

During active or forced inspiration a number of additional 'accessory' muscles may be recruited including the sternocleidomastoids and scalenes.

The diaphragm is a musculotendinous structure that separates the thoracic and abdominal cavities. It is the muscle that is primarily responsible for respiration.

When the diaphragm contracts both domes descend, expanding the thoracic cavity. This increase in volume causes a drop in intrathoracic pressure, drawing air in. At the same time, it increases the intra-abdominal pressure. The combination of raised intra-abdominal pressure and reduced intrathoracic pressure ‘sucks’ venous blood to the heart aiding venous return.

During normal breathing, the diaphragm may only move by 1.5cm, during deep breathing this may increase to 7cm.

The diaphragm is a double-domed structure with the muscular fibres blending into a central tendon. The surrounding muscular component is divided into three parts:

The right dome is typically higher due to the presence of the liver below. 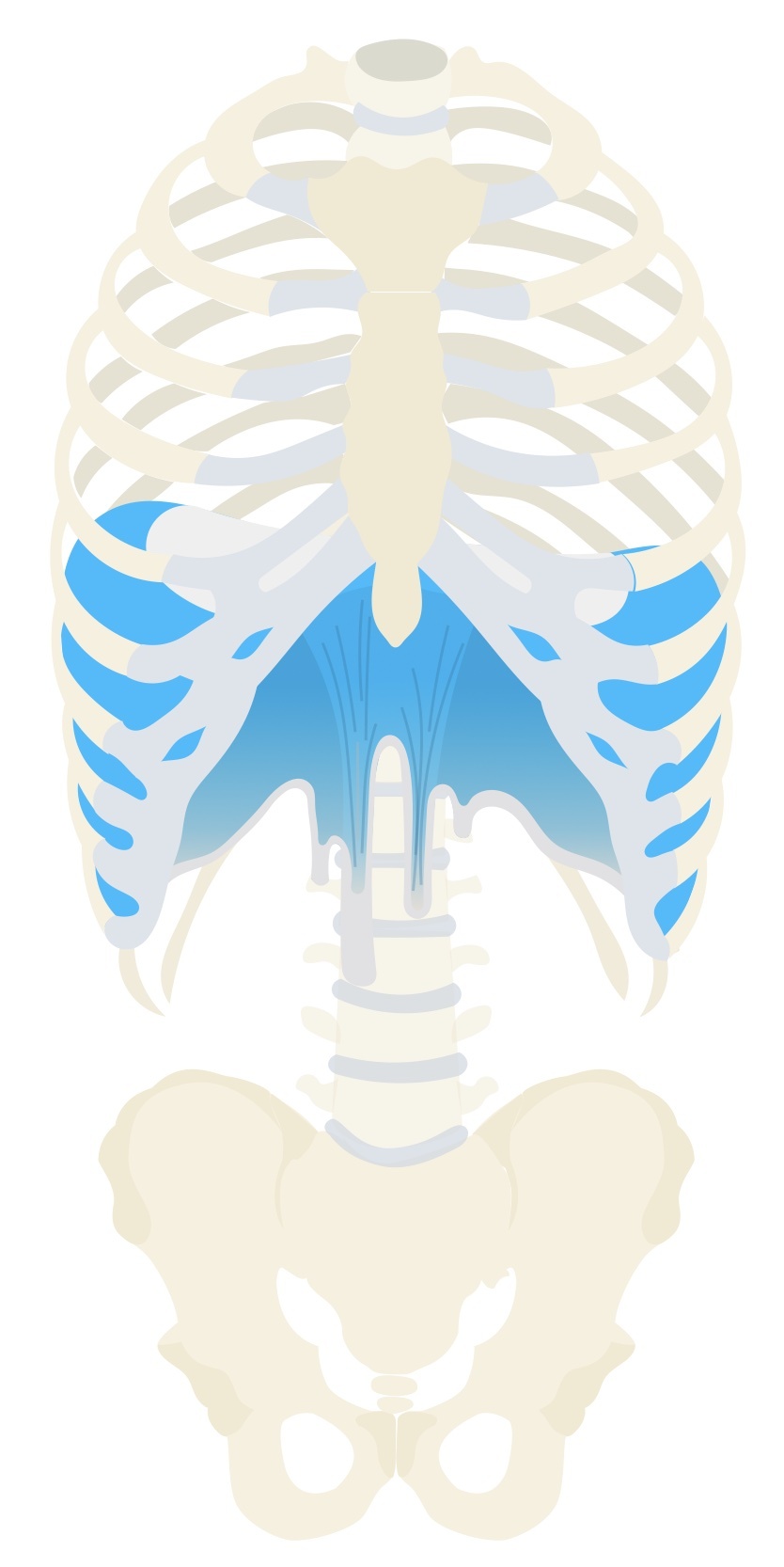 The diaphragm is innervated by the phrenic nerve, which arises from the spinal nerve roots C3, C4 and C5. This can be remembered using the phrase ‘C3, 4, 5 keep the diaphragm alive’.

It has an extensive blood supply:

The diaphragm has three major apertures:

There are 11 pairs of external intercostal muscles whose fibres run inferoanteriorly.

Contraction of these muscles brings the ribcage upward and outward - increasing both the anterior-posterior and lateral diameter of the chest. This expansion of the thoracic cavity causes the inward flow of air. 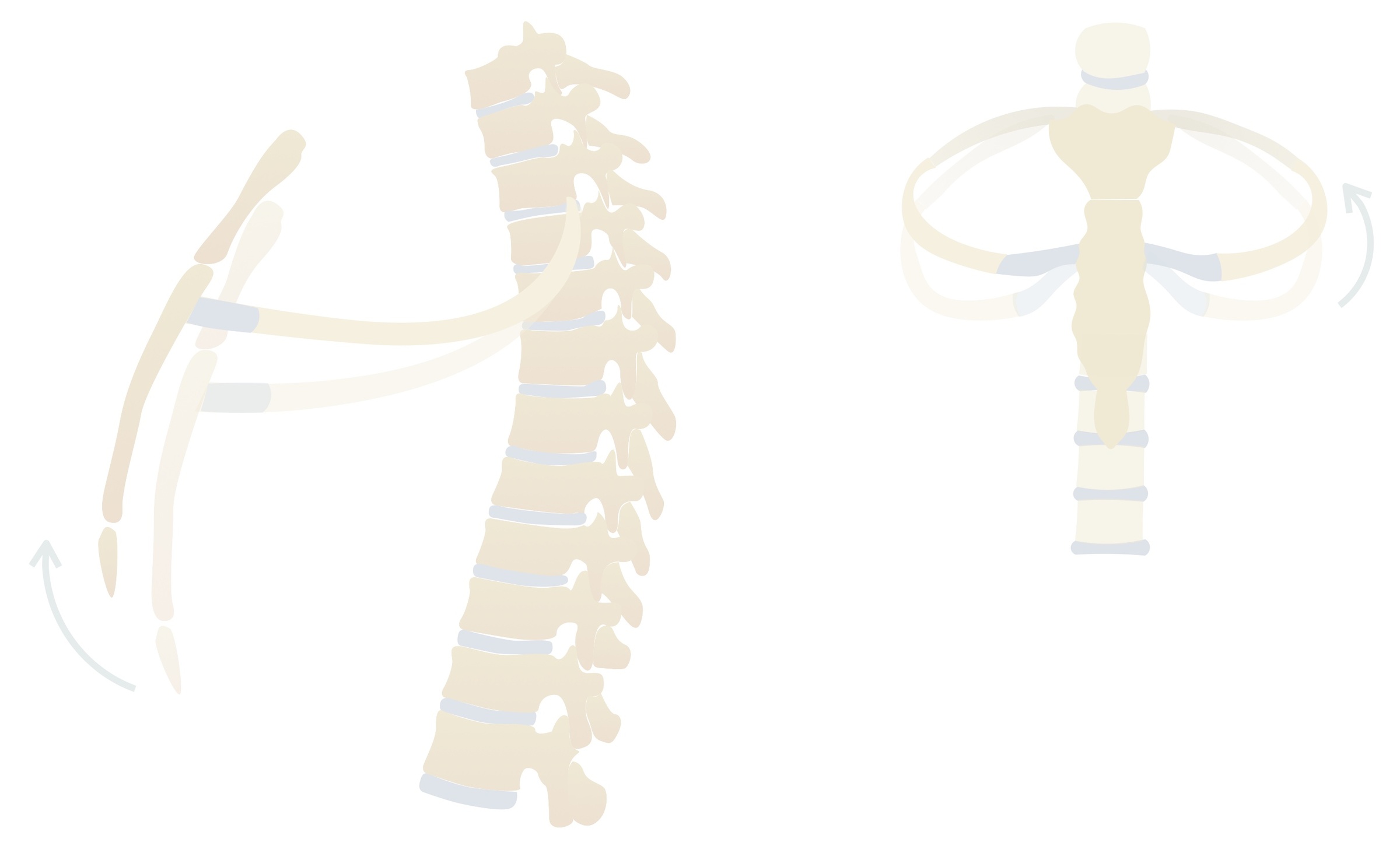 The muscles run from the costochondral junction anteriorly to the rib tubercles posteriorly. Each muscle originates from the inferior border of the rib above and inserts onto the superior border of the rib below. Anteriorly the muscles blend with the external intercostal membranes which continue to the sternum. Inferiorly they are continuous with the external oblique muscles. 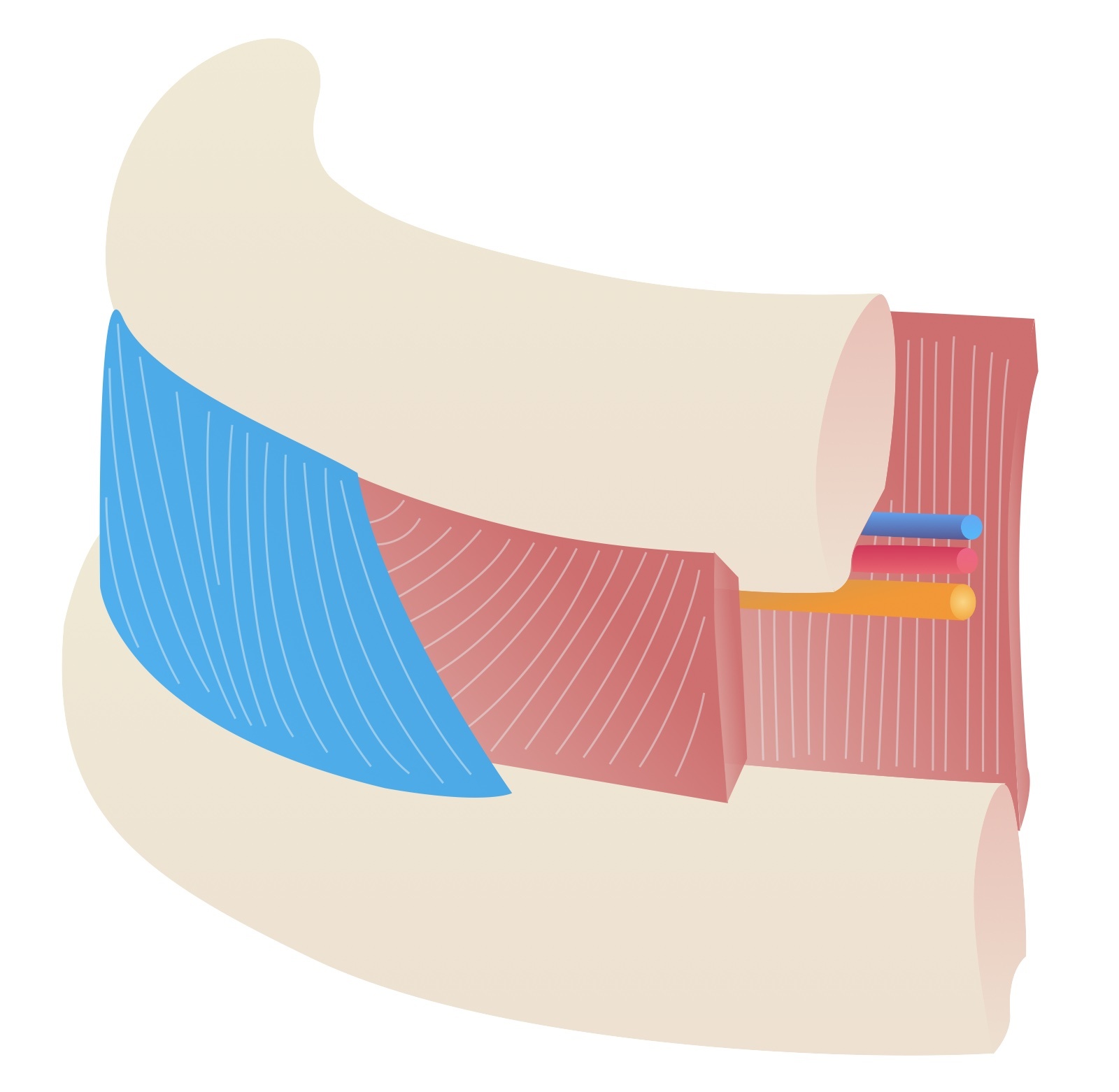 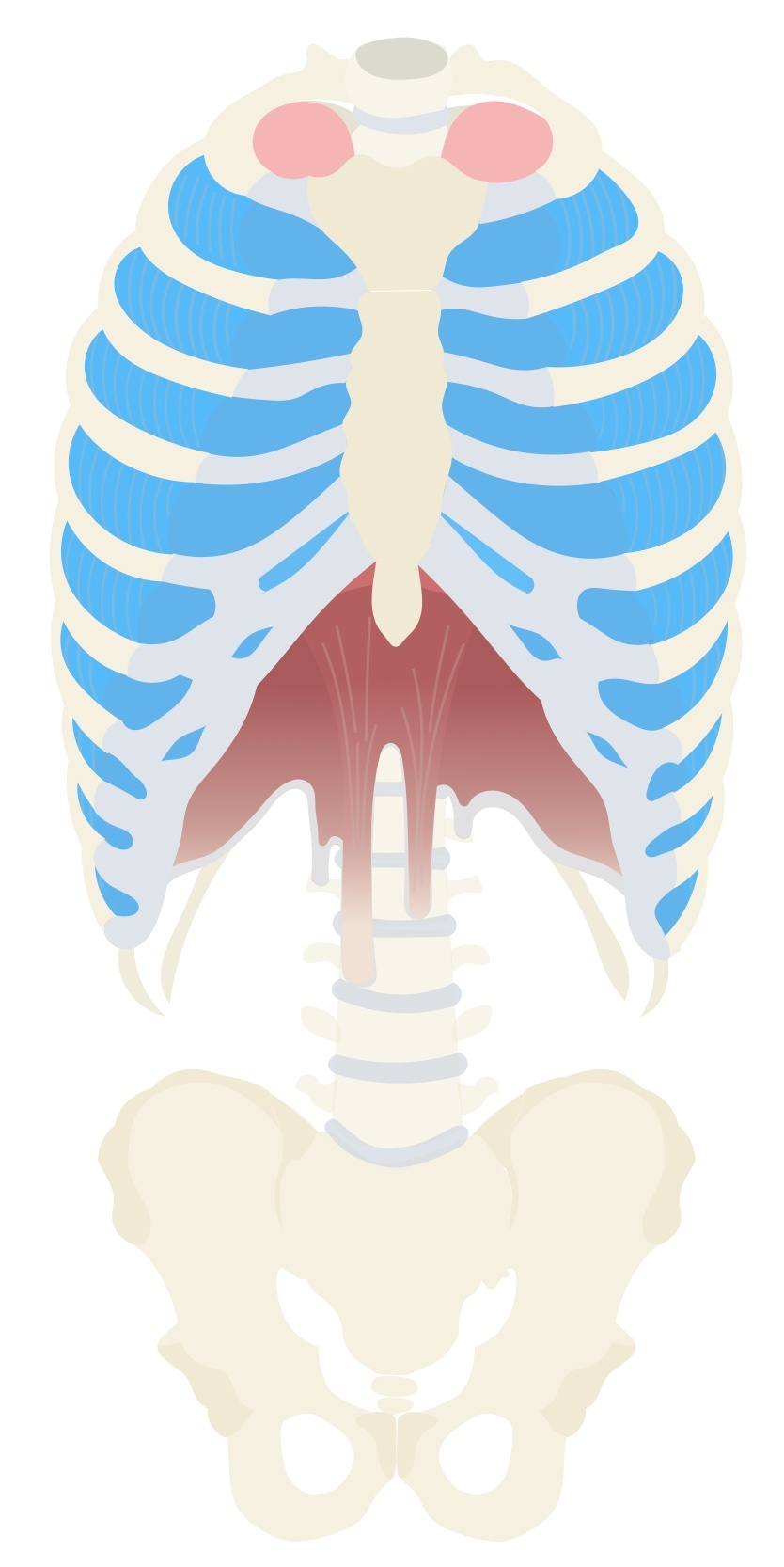 The sternocleidomastoid (SCM) is a strap-like muscle that acts to rotate and flex the neck. It is innervated by the accessory nerve.

During forced respiration it may act as an accessory muscle assisting with inspiration. It causes elevation and outward movement of the rib cage.

The SCM inserts superiorly at the mastoid process. Inferiorly, it has two heads with separate origins. The heads are separated by the lesser supraclavicular fossa:

The scalenes are a trio of prevertebral muscles capable of flexing the neck.

During forced inspiration they act as an accessory muscle and are capable of elevating the upper two ribs.

Normal expiration is a passive process that relies on the elastic recoil of the lungs. A number of muscles are recruited for forced expiration.

In quiet expiration the diaphragm relaxes and lung tissue recoils resulting in the expulsion of air. During active or forced expiration a number of muscles may be recruited: 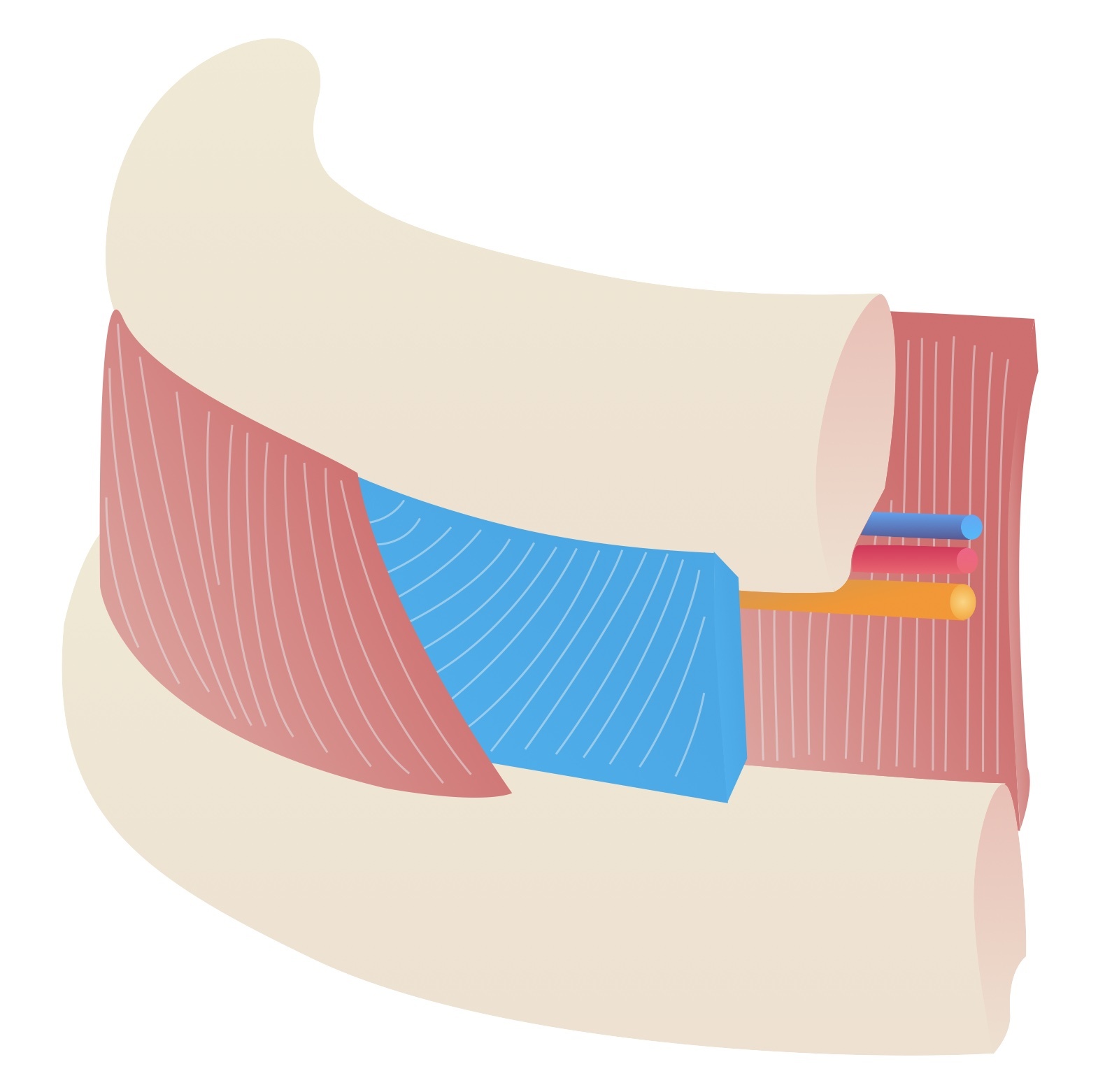 It is thought that the interosseous component of the internal intercostals act primarily during forced expiration helping to depress the ribs.

Muscles of the Abdominal wall

The rectus abdominis are paired muscles divided into four sections by tendinous intersections.

The external oblique is the largest of the three anterolateral abdominal muscles whose fibres run inferomedially.

A central aponeurosis connects the two muscular components. The inferior edge is thickened, running from the anterior superior iliac spine (ASIS) to the pubic tubercle as the inguinal ligament.

The internal oblique is the middle of the three anterolateral abdominal muscles whose fibres run superomedially.

The transversus abdominis lies deep to the internal oblique and its fibres run transversally across the abdomen.

Its circumferential nature makes it suited to compressing the contents of the abdominal cavity.

We'd love to hear your feedback on our Muscles of respiration notes.