Respiratory failure occurs when there is inadequate gaseous exchange in the lungs.

Two types of respiratory failure are defined based upon the partial pressure of oxygen and carbon dioxide:

Hypoxaemia is most commonly caused by a V/Q mismatch, hypercapnia is often caused by alveolar hypoventilation.

There are a number of processes that lead to hypoxaemia and hypercapnia. Though below we discuss them separately they are related and often occur together.

V/Q refers to the ventilation-to-perfusion ratio. This is the ratio of alveolar ventilation to alveolar perfusion. In the average adult the alveoli are ventilated by 4L of air and perfused by 5L of blood each minute, giving a V/Q ratio of 0.8 (4:5).

In normal health there is a mismatch in V/Q that differs depending on the part of the lung. Whilst standing, perfusion is better to the bases when compared with the apices due to gravitational and hydrostatic forces. Ventilation is also higher at the bases compared to the apices but the differential is to a far lesser degree. As such the V/Q ratio at the apices is around 3.3 compared to 0.6 at the bases.

In disease there may be an increase in the V/Q mismatch leading to hypoxaemia. During a disease process the V/Q ratio varies in the lung based on location and type of pathological process:

A shunt refers to blood entering the left side of the heart without first having travelled through pulmonary capillaries and participating in gaseous exchange. This can be thought of as an extreme version of V/Q mismatch (V/Q = 0)

Shunts respond relatively poorly to oxygen therapy when compared to V/Q mismatch as the shunted blood cannot be ventilated. Hypercapnia may occur if there is a high shunt fraction.

Diffusion limitation refers to the impairment of gaseous exchange across the alveolocapillary membrane. It can occur via two mechanisms:

It is often seen in emphysema and lung fibrosis. Hypercapnia is less common than hypoxaemia as carbon dioxide is far more soluble and less likely to to be affected. The hypoxaemia normally responds well to oxygen therapy.

The PaCO2 (at a steady state of CO2 production by tissues) is determined by alveolar ventilation. Hypoventilation of the alveoli therefore leads to hypercapnia.

Causes of reduced minute ventilation and alveolar hypoventilation include:

If hypoxaemia is present it is normally readily treated with oxygen therapy.

Dead space represents areas of the lung that are ventilated but not perfused and therefore do not contribute to gaseous exchange. It can be thought of as an extreme V/Q mismatch and the opposite of a shunt (V/Q = infinity, technically undefined). Dead space can be:

An increase in alveolar dead space through destruction of pulmonary capillaries can be seen in conditions like emphysema (COPD) and interstitial lung disease. This increase results in a lower proportion of tidal volume engaging in gaseous exchange. As such, functionally the result is the same as a reduction in minute volume and leads to hypercapnia. An increase in the respiratory rate and tidal volume can normally compensate for this, but any pathology that impairs the compensatory response can rapidly result in hypercapnia.

T1RF is most commonly caused by a V/Q mismatch.

T1RF is characterised by hypoxaemia (PaO2 < 8 kPa) and a normal or low CO2. It is most commonly caused by V/Q mismatch, but is also seen in other processes like shunts, diffusion limitation and alveolar hypoventilation. 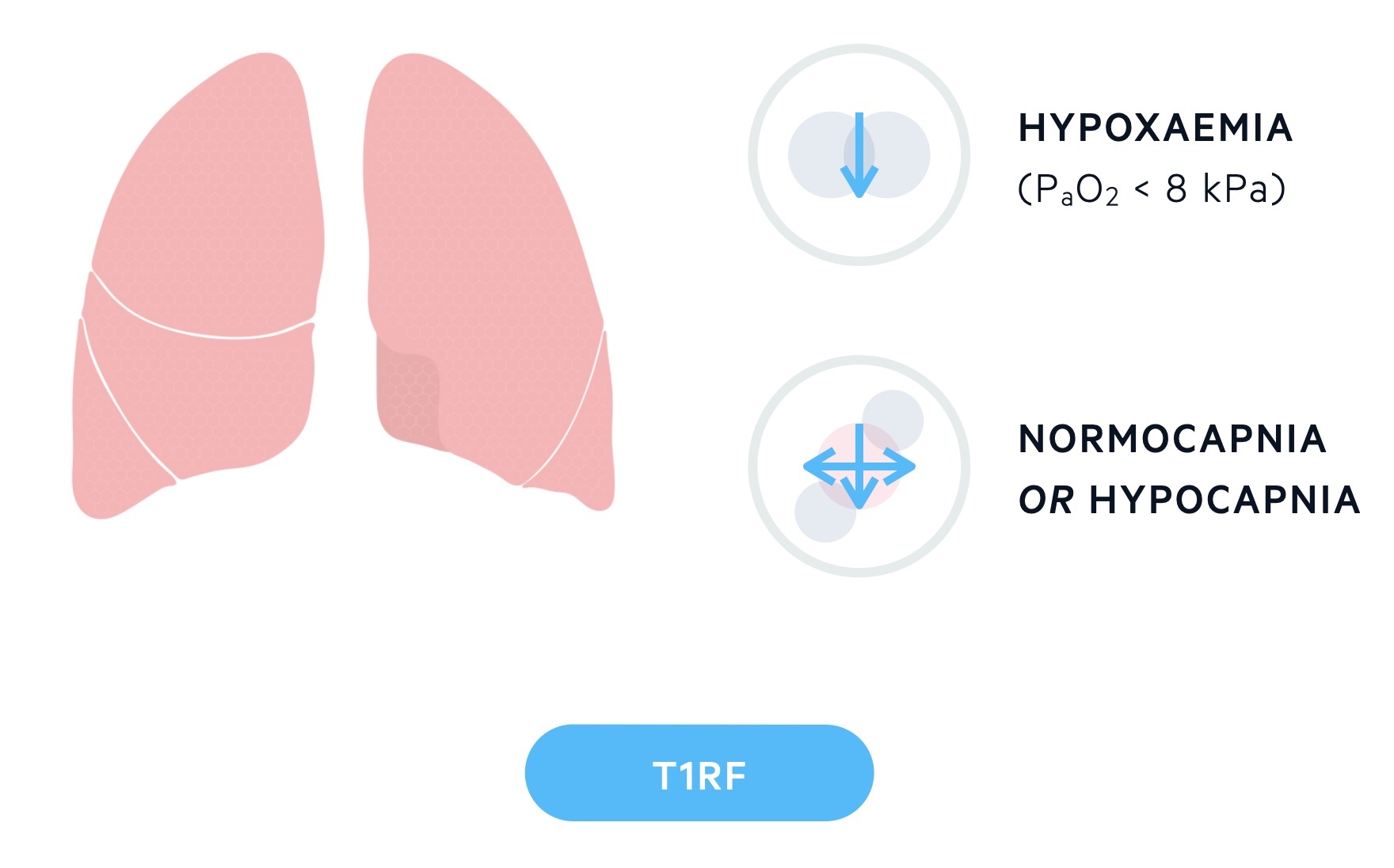 T1RF may be acute or chronic. Unlike with T2RF where changes on the ABG (see below) can indicate chronicity, differentiating between acute and chronic T1RF on an ABG is not as straightforward. Signs of chronic hypoxaemia include polycythaemia (an increase in the red cell mass in the blood, of note most ABG machines give a haemoglobin result) and the development of cor pulmonale.

Common causes of T1RF include:

T2RF is seen in conditions that result in alveolar hypoventilation.

T2RF is characterised by hypoxaemia (PaO2 < 8 kPa) and hypercapnia (PaCO2 > 6.5 kPa). It is also referred to as hypercapnic respiratory failure. It can be either acute or chronic depending on its speed of onset and presence of compensatory mechanisms. 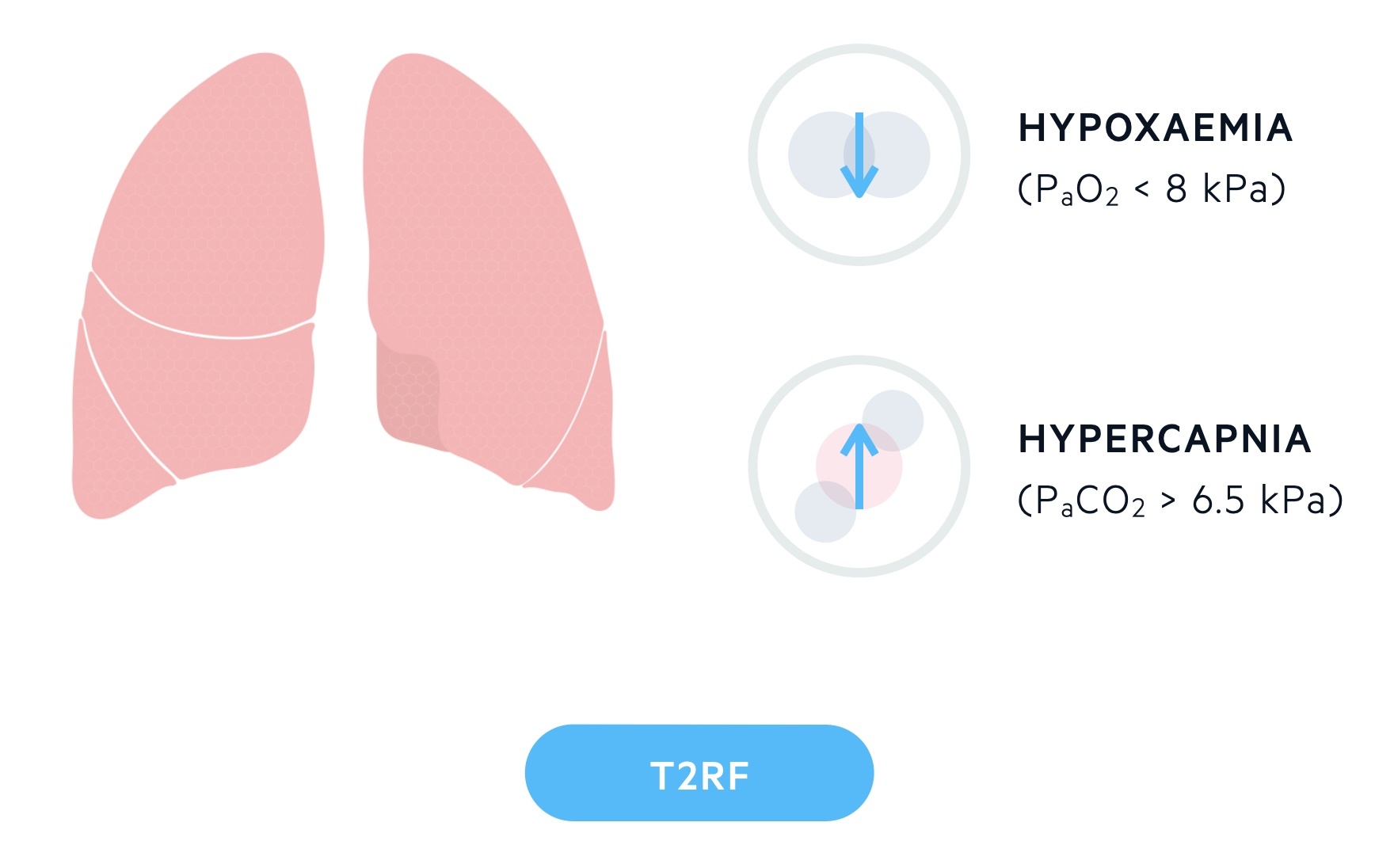 Acute T2RF can present with significant hypoxaemia, electrolyte disturbances, cardiovascular instability, loss of consciousness and ultimately cardiac arrest. It is usually indicated by an acute insult (e.g. opiate overdose, or acute exacerbation of COPD) with a new respiratory acidosis and no evidence of chronic compensation (e.g. normal bicarbonate).

Chronic T2RF is evidenced by compensatory mechanisms seen on ABGs (or VBGs). An increase in the bicarbonate level occurs in the setting of a chronic respiratory acidosis. It often reaches values in the 30s (normal 22-26 mmol/L). Chronic respiratory acidosis may be fully compensated with a normal pH, elevated PaCO2 and significantly elevated bicarbonate level.

Causes of chronic respiratory acidosis include:

Oxygen-induced hypercapnia is thought to be primarily the result of increased V/Q mismatch and physiological dead space.

In a subset of patients with COPD, high flow oxygen during an acute exacerbation will cause oxygen-induced hypercapnia. It has long been taught that in the presence of chronic hypercapnia (for example in some COPD patients), hypoxia becomes the primary driver of ventilation. This was thought to be due to desensitisation of the respiratory centre to raised CO2. Therefore, in acute deteriorations treatment with high-flow oxygen targeting high O2 saturations would risk respiratory depression and a reduction in the minute volume.

The reality is this theory was posited several decades ago and now represents an outdated understanding of the underlying processes. Though this may lead to a rise in the PaCO2, the effect is not sufficient to explain the rise seen in clinical practice.

It is now understood that the development of oxygen-induced hypercapnia is multifactoral:

COPD patients who are CO2 ‘retainers’ should generally have a lower saturation target of 88-92%. For those interested in more details, a concise paper on the topic can be found: Abdo et al: Oxygen-induced hypercapnia in COPD: myths and facts.

We'd love to hear your feedback on our Respiratory failure notes.