Tuberculosis (TB), caused by bacteria of the mycobacterium tuberculosis complex, is one of the world's most common and deadly infective diseases.

TB is an infectious disease responsible for significant morbidity and mortality worldwide. There is a great deal of variety in the clinical presentation and the disease can manifest in a number of organs. It most commonly affects the lungs in what is called pulmonary TB.

The disease may exist in a number of phases:

In the UK TB has an annual incidence of around 8.4 per 100,000. This is significantly higher in London and amongst non-UK-born populations. Treatment involves long courses of a combination of antibiotics. 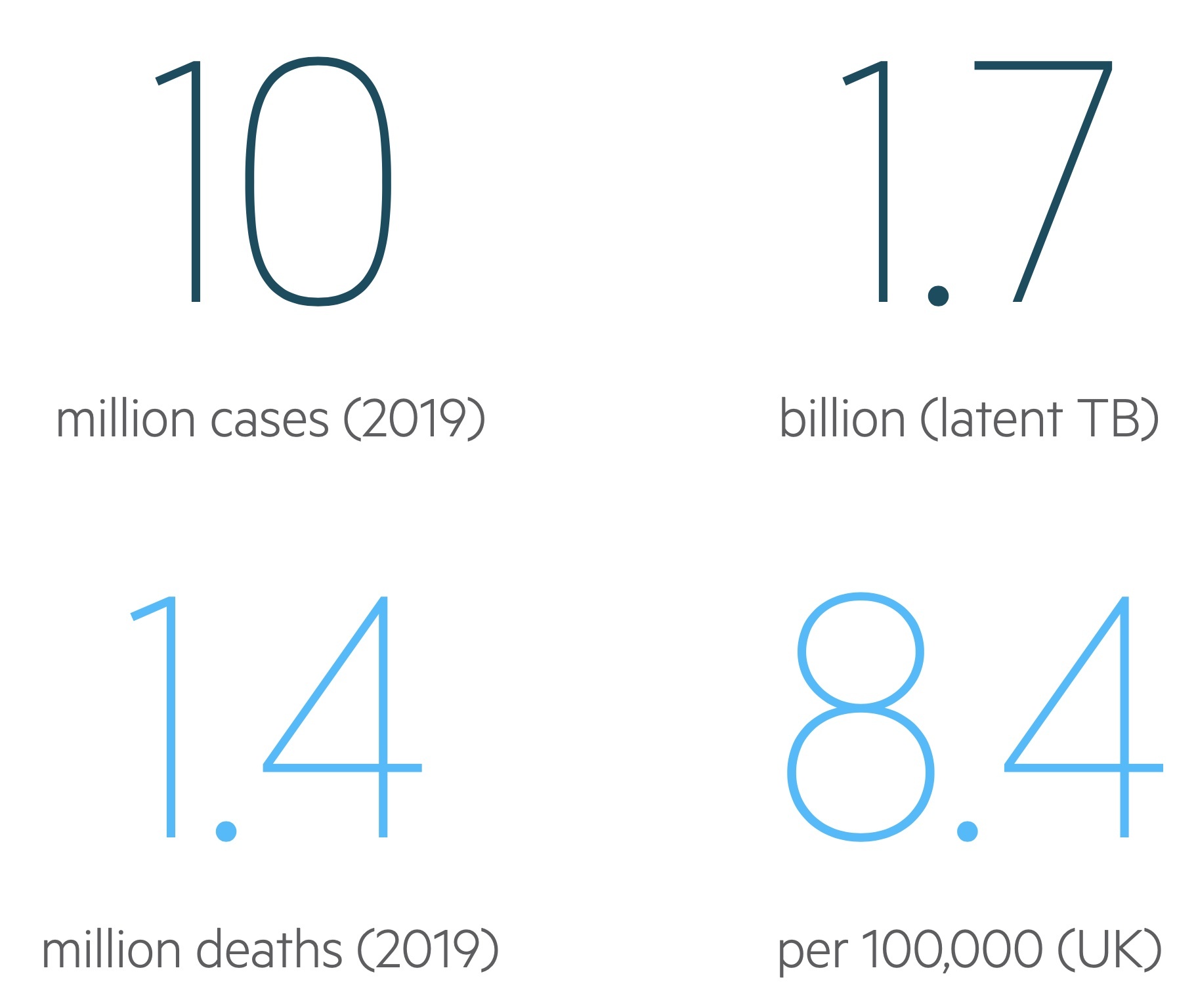 The World Health Organisation estimates that 10 million people fell ill with TB in 2019.

There were an estimated 1.4 million deaths from TB in 2019 with the infection remaining one of the top 10 causes of death worldwide. Of those deaths, 208,000 were in HIV +ve patients. Through international health efforts, death from TB decreased by 14% between 2015 and 2019 (though this is below the targeted decrease). Approximately 1.7-2 billion people around the world have latent TB. Of this figure, approximately 5-10% will be expected to develop active disease.

In the UK incidence varies highly depending on location. In 2017 a total of 5567 cases were notified with an annual incidence of 8.4 / 100,000. Rates are 13 times higher in people who were not born in the UK, accounting for 71% of cases. Urban areas, in particular London, have a higher burden of disease - around 40% of TB cases in the UK occur in London.

TB is caused by mycobacterium and spread via aerosolised droplets.

Mycobacterium, a genus of Actinobacteria, are aerobic, acid-fast, slow-growing bacteria. Those capable of causing TB in humans are referred to as the mycobacterium complex (MTc) and comprises of:

Mycobacterium tuberculosis is the main cause of TB. Humans serve as its only host and it is highly efficient at spreading. 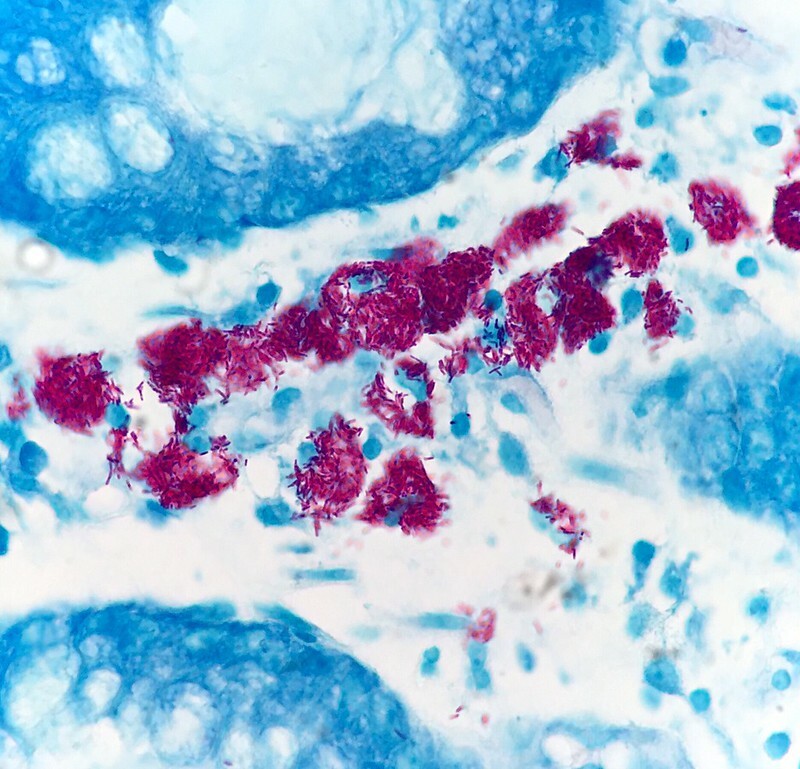 TB has a complex natural history.

Once mycobacterium bacilli have been inhaled patients may follow a number of clinical paths: 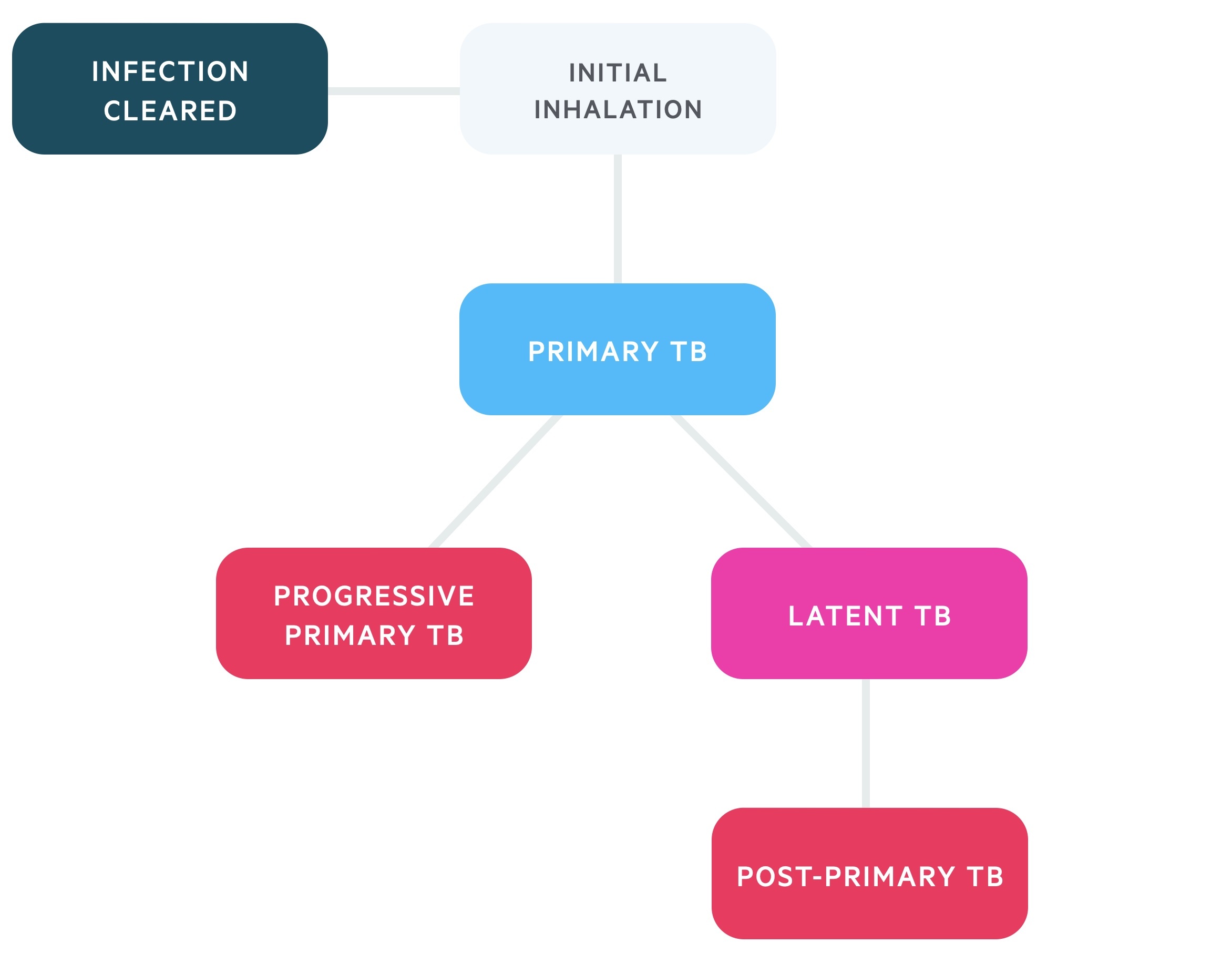 Inhaled bacilli find their way into alveoli, here they begin dividing. In some individuals this may be immediately cleared. In others primary TB develops. Once a critical mass is reached a host immune response is elicited with the highly antigenic mycobacterium producing a strong immune response. Alveolar macrophages phagocytose bacilli which continue to proliferate.

The Ghon complex, a pathognomonic lesion most commonly seen in children, may develop. The complex is made up of:

After 2-10 weeks a sufficient cell-mediated response halts the proliferation of the bacilli in the majority of individuals. These patients develop latent TB. They may have a Ranke complex - a calcified Ghon’s complex. A small proportion of patients (around 5%) do not halt the primary infection and develop primary-progressive TB. This is linked to patients with inadequate T-cell immunity (e.g. HIV/AIDs). Infection is often serious and may lead to disseminated TB.

Those with latent TB are at risk of reactivation - i.e. post-primary TB. Reactivation is linked with immunosuppression and immunodeficiency that may be linked to disease (HIV, lymphoma, CKD, DM), medications (steroids, TNF alpha inhibitors) and lifestyle factors (smoking).

Active TB may be heralded by weight loss, malaise, fever and symptoms specific to the site affected.

Active TB most commonly affects the lungs but other organs and tissues may be affected. Clinical features will often reflect the underlying site involved.

Pulmonary TB is the most common clinical manifestation of TB affecting around 55% with active disease. It may be asymptomatic or present with the classic triad of:

Shortness of breath and haemoptysis can also be present. Additional symptoms may be seen with laryngeal and pleural involvement. 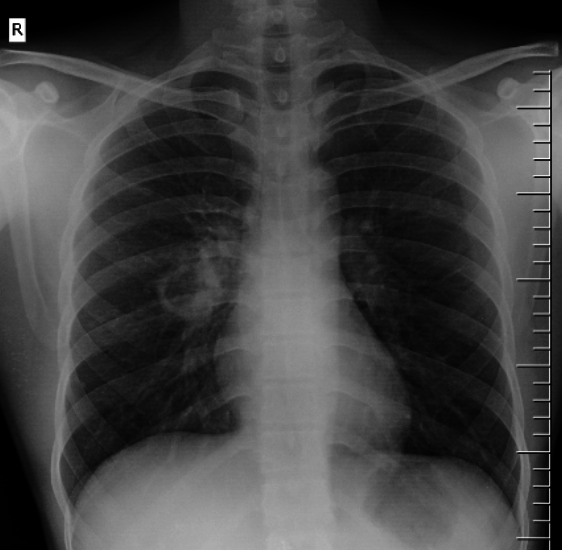 Pulmonary TB with a cavitary lesion in the right mid zone

The lymph nodes are the most common extra-pulmonary site. Nodes are typically described as:

It most commonly affects cervical and supraclavicular nodes. In chronic cases, suppuration and formation of a sinus tract can occur.

TB frequently affects the genitourinary tract. 'Sterile' pyuria may be seen. Other features include:

Miliary TB is the disseminated haematogenous spread of the bacilli. The term miliary comes from the characteristic chest radiograph finding - the appearance of millet seeds throughout the lung fields.

CNS TB is present in 20%. Multiple organ failure and organomegaly may develop. 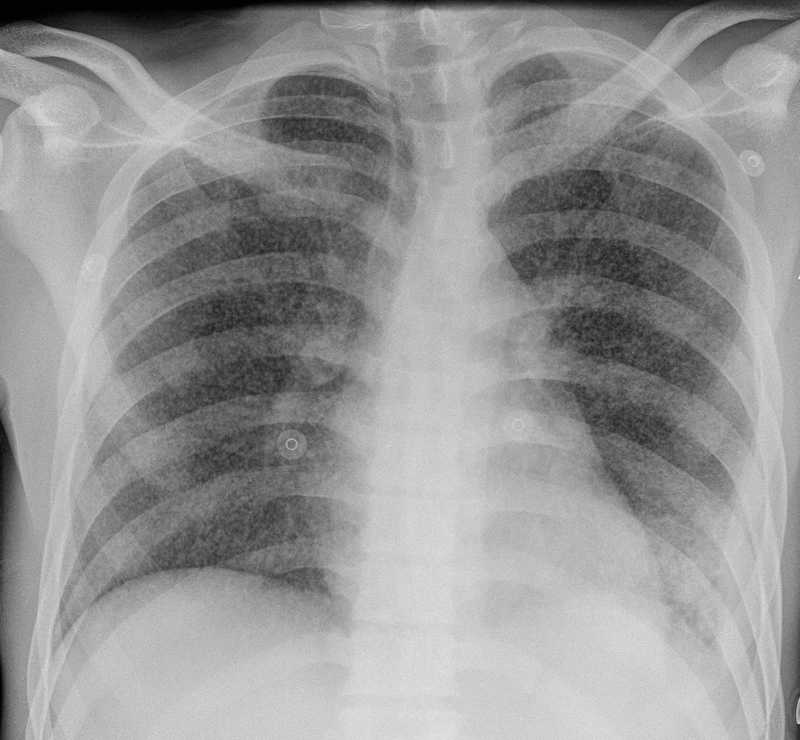 CNS TB has numerous manifestations, the most common being TB meningitis. TB meningitis tends to present with fever, malaise and headache.

TB affecting the spine is called Pott’s syndrome. Symptoms include:

Neurological deficits are seen in 50% and the development of spinal deformities, typically kyphosis, is common.

At risk patients may be screened for latent TB.

Patients who are asymptomatic but at high-risk for latent TB can be screened. The following groups may be offered testing:

The Mantoux test Involves an intradermal injection of tuberculin, a purified protein derivative from M. tuberculosis. If a patient has had exposure to TB they exhibit a delayed (type IV) hypersensitivity reaction. Diagnosis is based on the degree of the local epidermal reaction.

Previous BCG vaccination affects results. Interpretation is somewhat variable and at times the results are inconclusive. The Mantoux test is also used prior to the administration of the BCG vaccine.

These assays detect the bodies cellular immune response to TB. It tests for the T-cell interferon-gamma response to M. tuberculosis antigens. It is unaffected by previous BCG and non-tuberculous mycobacterium (NTM).

Patients with positive screening tests for TB should be discussed and reviewed by a TB specialist. The test is taken into context with the patients history and indications. Active TB must be excluded through clinical review, CXR and any other investigation indicated. In general patients with latent TB should be treated to prevent the development of post-primary TB.

Active TB is diagnosed with microbial tests and suggestive imaging.

Imaging forms a key part of the diagnostic process and all patients should have a chest X-ray and consideration given to CT chest.

Where possible three respiratory specimens - sputum samples (including one early morning sample) - should be sent for TB microscopy and culture. In those unable to produce spontaneous sputum either induced sputum or bronchoscopy and lavage may be used.

In children and young people slightly different testing may be used. For example gastric lavage can be used as an alternative to induced sputum or bronchoscopy and lavage in those unable to produce spontaneous sputum.

The diagnosis of TB requires site specific testing. There are a huge range of possibilities so here we will discuss a few of the possibilities:

Lymph node TB: Imaging may be with USS, CT or MRI. Samples may be taken by either aspiration or biopsy. In addition to the routine tests nucleic acid amplification may be performed on samples.

Genitourinary TB: Imaging may involve USS and IV urography. Direct visualisation of the fallopian tubes and ovaries can be acheived with laparoscopy. Three early morning urine samples can be sent for TB culture. Biopsy may be taken from affected site (e.g. endometrial curettings or renal biopsy).

The BCG is the worlds most utilised vaccine with an estimated 3 billion vaccinations administered.

A Mantoux test (tuberculin skin test) is required prior to administration in those aged > 6 years, or younger if there is a history of exposure to TB.

A positive result contraindicates the vaccine due to the risk of a severe reaction. It does not indicate the patient is immune to TB.

BCG is a live attenuated vaccine. Its has variable efficacy but prevents severe disease in children. It is not particularly effective in adults.

It is also protective against leprosy (caused by a non-tuberculous mycobacterium) and is a treatment in bladder cancer.

TB is typically treated with a combination of antibiotics for a period of months.

The antibiotics used and length of course depend on a number of factors. In latent disease patient risk factors, age and screening tests are considered. In active disease the site of infection and resistance patterns are considered.

Below we briefly discuss the four most commonly used medications in the treatment of TB:

Isoniazid, Rifampicin, and Pyrazinamide are all associated with hepatotoxicity. Hepatotoxicity is seen in up to 20% of patients on isoniazid though it is normally mild - more seriously isoniazid induced hepatitis occurs rarely and is potentially fatal.

Patients should have baseline LFTs and serial measurements may be arranged. Patients with established liver disease should be discussed at specialist MDT meetings.

Latent TB is variably treated depending on a number of patient factors.

Active disease must first be excluded. Screening for liver disease, HIV, hep B and hep C is conducted prior to the induction of therapy.

Treatment decisions are made by specialists through discussion with the patient of the relative merits of each option. NICE generally advise treatment in those younger than 65 (including patients with HIV) with evidence of latent TB and have been in contact with individuals with suspected or confirmed infectious pulmonary (or laryngeal) drug sensitive TB.

Liver disease is a relative contraindication and cases should be discussed at specialist MDTs. In adults aged 35-65, NICE only advise drug treatment if there is no concern of hepatotoxicity.

Latent TB may be treated with:

In some patients rifampicin can cause interactions with other medications (e.g. HIV +ve or transplant patients) in which case 6H is preferred. 3HR is preferred if the patient is younger than 35 if hepatotoxicity is a concern.

All forms of active TB are considered a notifiable disease. As such it is a statutory requirement that cases are reported to the relevant public health body.

Active TB without evidence of CNS involvement is managed with isoniazid (with pyridoxine), rifampicin, pyrazinamide and ethambutol for 2 months followed by rifampicin and isoniazid for 4 months.

This is termed the standard recommended regimen (2HRZE, 4HR).

CNS TB is treated with isoniazid (with pyridoxine) and rifampicin for 12 months whilst pyrazinamide and ethambutol are given for the first 2 months (2HRZE, 10HR).

Patients with CNS involvement are offered dexamethasone or prednisolone at the start of treatment which is then weaned over 4-8 weeks (dosing dependent of disease severity).

Patients with pericardial TB are offered prednisolone at the start of treatment which is then weaned over 2-3 weeks.

DOT involves direct supervision of patients during treatment for TB. It is thought to improve engagement and adherence with therapy.

Certain groups are thought to find greater benefit from DOT, these include alcoholics, homeless people and those with a history of poor adherence.

WHO estimate 484,000 people were affected by rifampicin resistant TB in 2018, 80% of which had multi-drug resistance.

TB that is resistant to first-line therapies poses a significant public health concern. Close contact tracing and transmission precautions must be used.

If rifampicin resistance is found, patients should be tested for resistance to second line drugs. Treatment may require at least 6 drugs that the TB strain does not have resistance against.

Patients who have resistance to a single agent from the first line medications (isoniazid, pyrazinamide and ethambutol) tend to need a combination of the others - though the course may be lengthened.

Rifampicin resistance is treated as per the multi-drug resistant pathway (described above).

Active TB tends to be a slowly progressive disease that is normally responsive to treatment.

Untreated the 10-year mortality is estimated as high as 70%. HIV co-infection is a key risk factor and increases mortality by approximately 3 times. Multi-drug resistant TB is also associated with poorer outcomes.

Untreated patients with latent TB have a 5-10% lifetime risk of developing active TB - though this can be higher is certain groups (e.g. immunosuppressed). Treatment for latent TB is thought to reduce the chance of active TB by around 90%.

We'd love to hear your feedback on our Tuberculosis notes.