Amyloidosis refers to the extracellular deposition of fibrils that contain a variety of proteins.

An amyloid fibril is simply the assembly of insoluble protein fibres that are composed in a way that is resistant to degradation. This composition is known as a beta-pleated sheet. These deposits of amyloid fibrils are extracellular (i.e. occurring outside of cells) and may be seen in different tissues and organs. 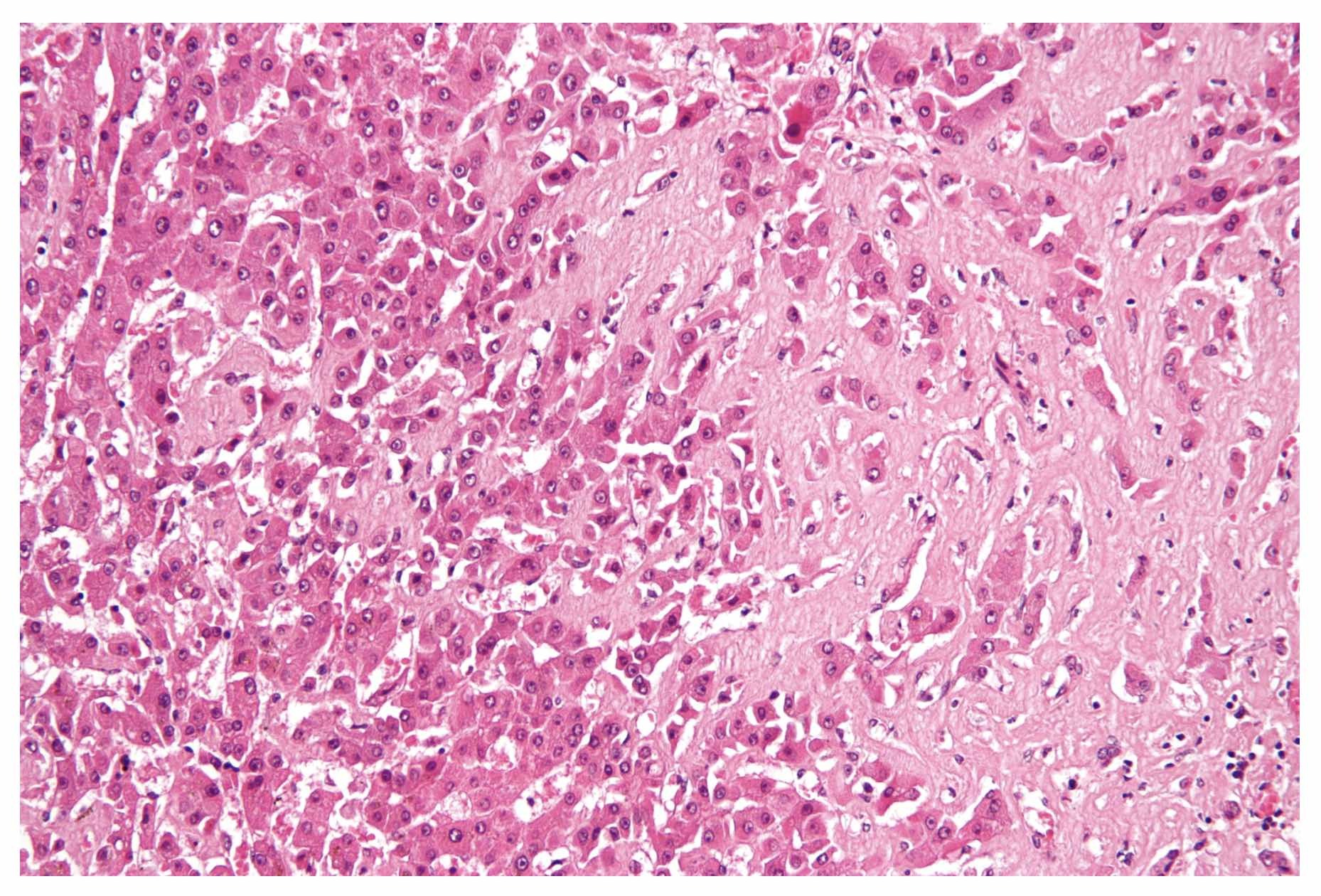 The problem with amyloid is that deposition in tissue can lead to organ dysfunction. When organ dysfunction is caused by amyloid we usually refer to it as amyloidosis. Amyloidosis may be systemic or localised:

Amyloid fibrils can contain a variety of insoluble proteins. They are derived from soluble proteins (e.g. immunoglobulin light chains, amyloid precursors) that range in size from 5-25 kDa and subsequently undergo conformational/structural changes due to a variety of reasons. They subsequently form a beta-pleated sheet configuration that is resistant to degradation. Deposition in organs leads to disruption of normal tissue function and the development of organ failure.

There are at least 38 human precursors to amyloid fibrils. Examples include:

These amyloid fibrils and the associated precursor proteins can be associated with an underlying disease process that may be inherited or acquired. Examples include:

Ultimately, the build-up of amyloid in organs disrupts normal cellular function and can lead to organ failure. In certain hereditary forms of amyloidosis, for example, patients may develop progressive heart failure, peripheral neuropathy, and autonomic dysfunction amongst other pathologies.

The features of amyloidosis depends on the organ(s) affected.

Different forms of amyloid may affect different organs within the body. As deposition or local production of amyloid continues there is progressive organ dysfunction and eventually failure. The severity largely depends on the amount of amyloid deposited.

Cardiac involvement is characterised by the development of heart failure. This is usually diastolic initially (i.e. abnormal relaxation) that progresses to systolic failure over time. Patients are also at risk of dangerous arrhythmias and heart block due to the involvement of the electrical system.

Involvement of the GI tract can lead to a range of clinical features depending on the extent and location of involvement.

The central or peripheral nervous systems may be affected by amyloid

Many other organ systems may be affected by amyloid. Some of these include:

The definitive diagnosis of amyloid is made on tissue biopsy.

It may be very difficult to diagnose amyloid and in the early stages of the disease, it requires a high degree of suspicion. Features that may suggest underlying amyloid include:

When amyloid is suspected diagnosis is based on a tissue biopsy. This does not need to be from the suspected site of organ dysfunction but from a site of known amyloid deposition such as subcutaneous fat, minor salivary glands, or rectal mucosa. In some cases, a biopsy from the dysfunctional organ may be needed (e.g. kidneys). The abdominal fat pad biopsy is commonly chosen first.

A biopsy is important because it enables the identification of amyloid under the microscope. Amyloid fibrils are identified using Congo red staining, which leads to apple-green birefringence under polarised light. A variety of other laboratory techniques may be used to identify the type of amyloid including immunohistochemistry, amino acid sequencing, or mass spectroscopy.

A variety of other investigations may be utilised to look for the extent of amyloid and organ involvement (e.g. computed tomography, magnetic resonance imaging, echocardiography). 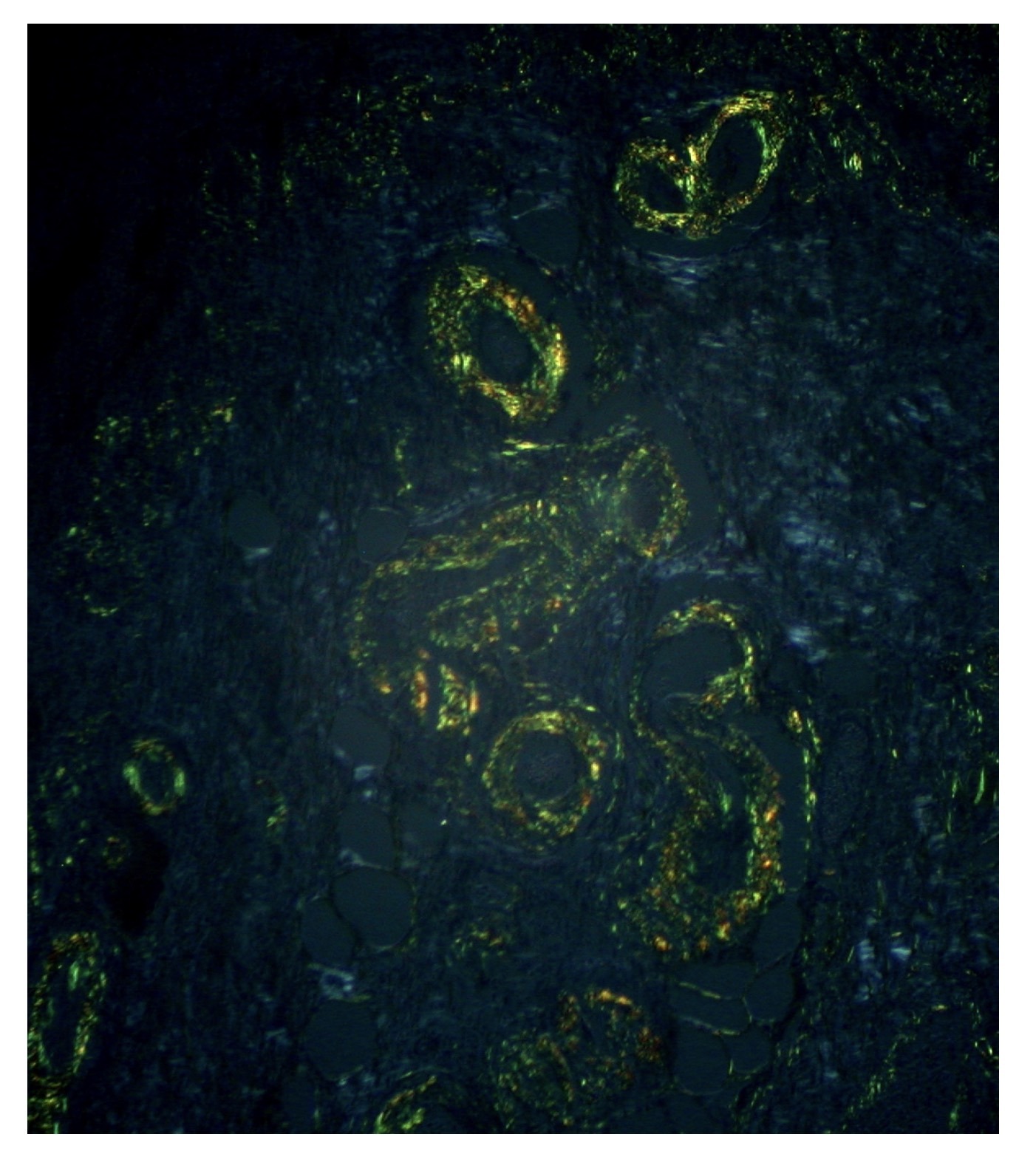 The treatment of amyloidosis depends on the underlying cause.

There are many different types of amyloidosis and treatment largely depends on the subtype, extent of organ dysfunction, and co-morbidities of the patient. In patients with systemic amyloid, treatment is typically directed towards the underlying cause (e.g. plasma cell abnormality in AL amyloid or chronic inflammatory disorder in AA amyloid).

Various novel treatments for the clearance of amyloid from organ tissue are being explored in clinical trials. Management of the complications of the underlying organ dysfunction is critical and this usually involves input from a wide range of specialties including cardiologists, neurologists, nephrologists, and rheumatologists amongst others.

We'd love to hear your feedback on our Amyloidosis notes.