Lymphadenopathy is a very broad term that simply refers to the disease of lymph nodes. The term is used to represent a change in size or consistency of a lymph node. The two most common causes of lymphadenopathy are infection and malignancy.

Lymphadenopathy may be peripheral or visceral:

Lymphadenopathy may be localised or generalised.

The presence of lymphadenopathy may be a non-specific finding or indicate the need to look for a serious underlying cause. This largely depends on the actual size and consistency of the lymph node(s), the number affected, and the clinical presentation of the patient.

The lymphatic system is essential for the regulation of tissue pressure, absorption of fats, and immune surveillance.

Lymph nodes are connected to one another by lymphatic vessels that collectively make up the lymphatic system. This system is important for many functions, which include:

Lymph is the fluid that is found within lymphatic vessels that is milky in colour due to its lipid content. It carries interstitial fluid away from peripheral tissue and transports it back to the systemic circulation. This occurs in the neck at the junction between the jugular and subclavian veins via two ducts (one on the left, one on the right):

Failure to take away the fluid that leaks out from the capillaries into the interstitial space will result in lymphoedema. This refers to the accumulation of protein-rich fluid in peripheral tissue causing swelling in the extremities that can be chronic and disabling.

The lymphatic system contains many organs important in immune function, which include

Immune cells such as antigen-presenting cells and lymphocytes are able to travel within the lymphatic system from the skin and other major organs to regional lymph nodes to help initiate a specific immune response. This ability to navigate through the lymphatic vessels is exploited by cancer cells. As epithelial cancers grow, they breach the confines of the epithelial lining and enter lymphatic vessels spreading to regional lymph nodes.

The initiation of an immune response (e.g. to an infection or an autoimmune reaction) or the spread of cancer cells can lead to enlargement of lymph nodes, which we term lymphadenopathy.

The two major causes of lymphadenopathy are infection and cancer.

The classic causes of lymphadenopathy include:

Lymphadenopathy secondary to infection is commonly painful due to the rapid enlargement and stretch of the lymph node capsule that activates pain receptors.

A variety of medications may cause a ‘serum sickness’ type of illness, which occurs when the immune system reacts to the foreign protein antigens within a drug leading to systemic illness. It is characterised by fever, arthralgia, rash and generalised lymphadenopathy.

As solid cancers grow and breach the surrounding basement membrane they may spread via lymphatics to regional lymph nodes. With deep visceral organs, this may be to visceral lymph nodes that can only be detected on imaging (e.g. retroperitoneal lymph nodes, gastric lymph nodes).

Lymphoma can be broadly divided into Hodgkin’s lymphoma and non-Hodgkin's lymphoma. They are cancers arising from abnormal lymphocytes and classically cause painless, firm lymph nodes found in the neck. They are often associated with 'B' symptoms that refer to fever, night sweats and weight loss. Lymphoma typically causes isolated or localised lymphadenopathy.

There are many types of leukaemia depending on the abnormal cell of origin. The major groups include acute myeloid, acute lymphocytic, chronic myeloid and chronic lymphocytic. These are predominantly malignancies of the bone marrow and peripheral blood but some types of leukaemia can cause lymphadenopathy by infiltration of the lymph nodes. This typically leads to more generalised lymphadenopathy with the main example being chronic lymphocytic leukaemia.

Generalised lymphadenopathy may be a prominent feature of several rare, systemic, inflammatory disorders. Examples include sarcoidosis, rheumatoid arthritis, Still’s disease and lupus. Other rare conditions may cause a localised form of lymphadenopathy (e.g. Castleman’s disease).

It is vital to ask about constitutional symptoms that may indicate underlying cancer or inflammatory disorder.

A patient will often present to medical care after noticing a lump or bump within the neck, axillae, or groin. It is important to use the history to determine the natural history of the lesion thus far and whether any concerning features are present that may point towards a serious underlying cause such as cancer.

Ask about the onset of the lump and whether it has changed over time. Remember, lymph nodes within the neck and groin can usually be felt as a soft or rubbery ‘pea-sized’ lump that is non-tender.

Establish whether the lymph node has rapidly grown over weeks or slowly over years. Remember that the patient may have only noticed the lump recently whereas, in reality, it may have been present for many years.

Pain is an important aspect to distinguish. Classically, a rapidly enlarging lymph node due to infection leads to pain or tenderness due to stretching of the lymph node capsule. Alternatively, malignancies (e.g. lymph node metastasis, lymphoma) classically cause a painless lymphadenopathy

Established whether the lymphadenopathy is localised to a particular region (e.g. neck) or more generalised involving multiple peripheral sites.

Localised lymphadenopathy is commonly associated with an infection in a similar region. Examples include cellulitis, tonsillitis, or otitis media. Ensure you enquire about any infective symptoms near the region (e.g. sore throat, red skin, earache).

Lymphadenopathy may be a sign of a serious underlying disease such as systemic infection, inflammatory disease, or cancer. It is important to enquire about features of weight loss, anorexia, fever, fatigue, and night sweats. The combination of fever, night sweats, and weight loss are known as ‘B’ symptoms, which are a classic feature of lymphoma.

Generalised lymphadenopathy may be seen in a range of infectious diseases. It is important to ask about risk factors for these diseases including unprotected sexual intercourse or injecting drugs (e.g. HIV), foreign travel and consumption of unpasteurised camel’s milk (e.g. brucellosis), cat scratches (e.g. cat scratch disease), and even tick bites (e.g. Lyme disease).

It is important to assess all the peripheral lymph node regions and assess for organomegaly.

The identification of peripheral or visceral lymphadenopathy should lead to a search for other involved areas. The peripheral locations where lymph nodes can be identified are divided into the neck and body.

It is important to palpate all the lymph node stations when examining the neck. 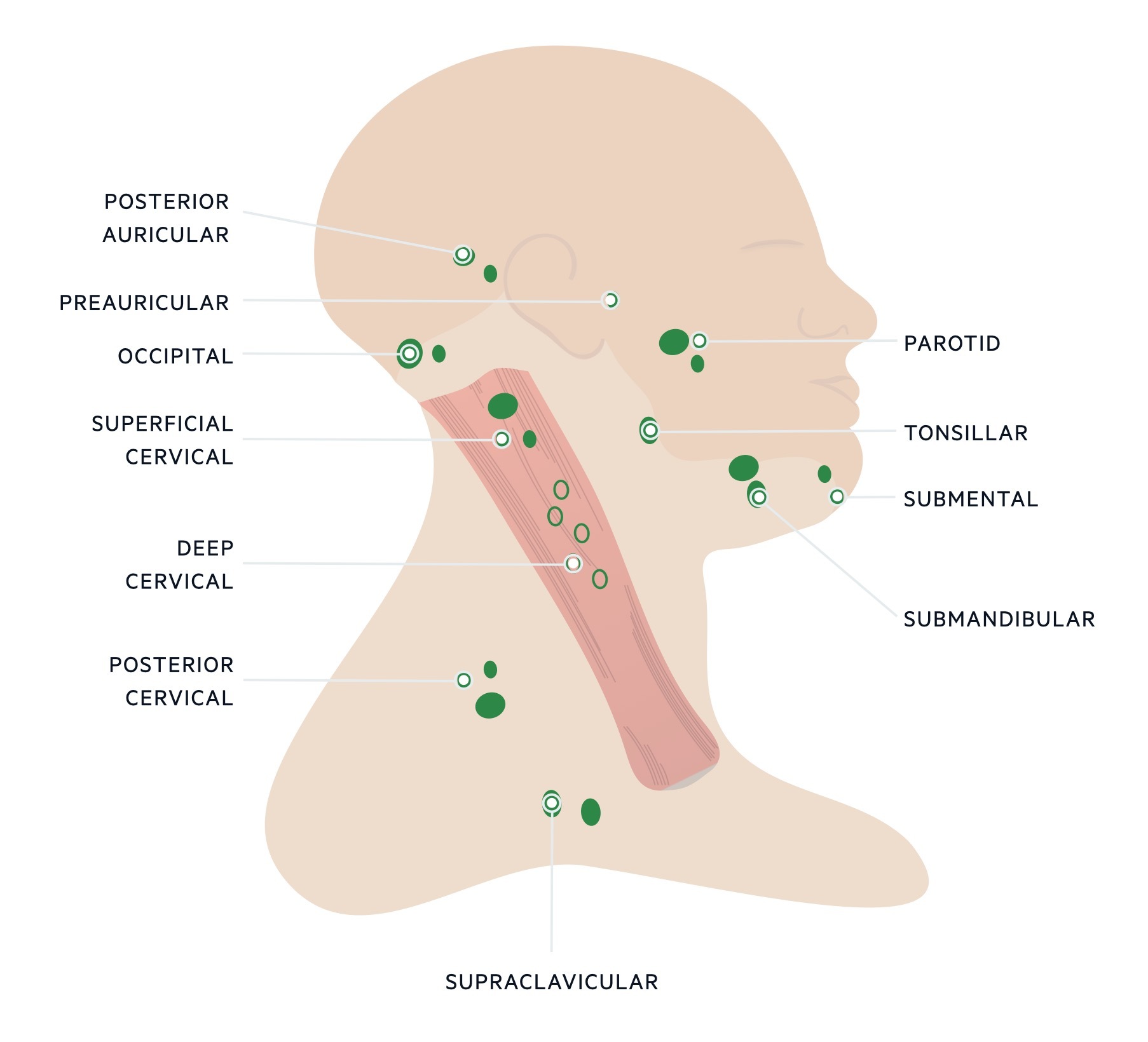 Make sure you adequately assess the peripheral lymph node locations on the body and consider a chaperone when assessing the lymph nodes in the groin. 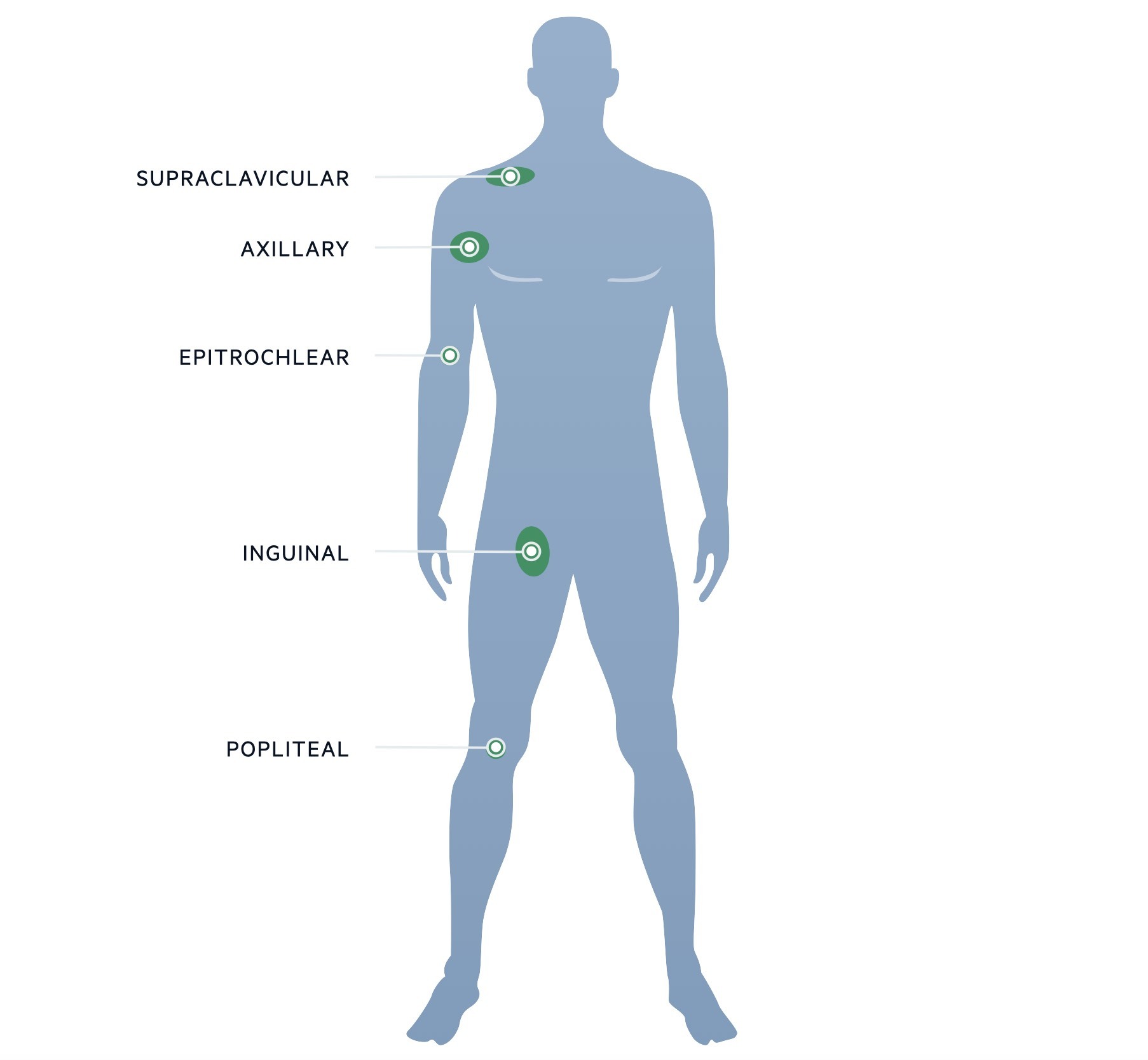 Examination of a lymph node should involve assessment of several key features:

Look for signs of an underlying systemic disease and thoroughly exam any areas of suspected infection (e.g. throat and tonsils in suspected tonsillitis). Complete an abdominal examination for hepatosplenomegaly and look for any bruising or petechiae that may indicate a problem with the bone marrow.

When a lymph node is felt to be abnormal investigations form an important part of the work-up. Lymph nodes are commonly imagined and/or biopsied.

Additional investigations are needed to determine whether there is an underlying systemic problem. These may include:

In unexplained localised lymphadenopathy, investigations depend on the age of the patient and suspected aetiology. If the lymph node does not resolve within four weeks then a biopsy is usually recommended.

In unexplained generalised lymphadenopathy, patients should be worked up for a systemic disorder and/or cancer and a biopsy is usually recommended of the most abnormal or accessible node.

Always ask about ‘B’ symptoms in patients presenting with lymphadenopathy.

Many causes of lymphadenopathy may be due to a localised infection. It is important to always enquire about ‘B’ symptoms that may indicate an underlying haematological malignancy that requires further investigation. Make sure when faced with lymphadenopathy you perform a full examination from head to toe checking all the peripheral lymph node locations.

We'd love to hear your feedback on our Lymphadenopathy notes.