Syphilis refers to an infection caused by the bacterium Treponema pallidum.

Untreated, syphilis can affect almost any organ in the body and was traditionally called the ‘great imposter’ because it can mimic many diseases in its late stages. Before the era of antibiotics syphilis was very common but it is now easily treated with penicillin when detected.

The prevalence of syphilis has been growing in the UK over the last decade.

Traditionally, Syphilis was a common condition but the incidence dropped with the widespread introduction of antibiotics in the 1940s. Since then, incidence has varied, but sustained growth since 2000 has been seen with a significant increase in cases in the UK between 2013-2018. Worldwide there were >19 million cases of syphilis in 2016.

New cases are most common in young adults (aged 20-29 years) and >75% of cases in 2018 were among men who have sex with men (MSM). Among MSM, up to 40% with syphilis have co-infection with human immunodeficiency virus (HIV). In addition, almost 50% of MSM with syphilis were diagnosed with another STI during the same episode or within the previous year.

Treponema pallidum is a spirochete organism that is solely a human pathogen.

T. pallidum was first discovered in 20th century. It is a spirochete organism that has a tight spiral-shaped structure and can be seen on dark field microscopy. It is too slender to be seen on routine microscopy and although it can be considered a gram-negative organism it is not seen on gram-stain.

Syphilis can be categorised into four stages known as primary, secondary, latent and tertiary.

Syphilis is categorised into four stages:

Syphilis may also be categorised into early and late:

Characterised by development of a painless ulcer known as a chancre. Develops at the site of inoculation. May go unnoticed depending on the site of infection (e.g. posterior pharynx). May be associated with lymphadenopathy.

Highly variable stage seen in approximately 25% of untreated patients. It is characterised by a systemic illness with multiple clinical features. Usually develops 4-12 weeks after appearance of the chancre and resolves within 3-12 weeks.

An asymptomatic period in which there is serological evidence of infection but no symptoms. Divided into early or late latent syphilis:

Since the era of antibiotics, tertiary syphilis is rare. Most commonly develops 15-40 years following infection. It is characterised by cardiovascular syphilis (e.g. aortitis, aortic regurgitation, heart failure), Gummatous syphilis (granulomatous lesions most commonly seen in the skin and bone) and neurosyphilis.

Syphilis infection increases the risk of miscarriage and stillbirth.

Congenital syphilis refers to a child born with the condition due to vertical transmission between mother and foetus. Divided into two types:

Syphilis is caused by T. pallidum, which is able to penetrate mucus membranes or pass through skin abrasions.

Syphilis is due to infection by the spirochete T. pallidum, which is most commonly sexually transmitted. As such, syphilis is normally checked as part of a STI work-up.

The organism can be transmitted by direct contact with infectious lesions, between mother and fetus or sharing needles among those who inject drugs.

T. Pallidum is able to penetrate mucous membranes or pass through skin abrasions. At the site of inoculation a small papule develops, which progresses to a painless ulcer known as a chancre that is highly infectious. The chancre is most commonly located in the genital region, but can occur at any area depending on the site of contact and it may be hidden to the patient (e.g. pharynx, anus, or vagina).

The incubation period ranges from 3-90 days (Median 21 days). There is a local infection, which can spread to regional lymph nodes and may disseminate. Around 25% of untreated patients will develop a more systemic illness weeks to months (e.g. 4-12 weeks) following infection known as secondary syphilis. Secondary syphilis is characterised by a variety of clinical features (see below) and is highly variable.

Late syphilis is highly variable and may develop 1-30 years following initial infections. There may be a long latent period before clinical features develop. Around 25-40% of untreated patients can develop late disease. Patients with late syphilis do not necessarily need to have had clinically symptomatic primary or secondary syphilis.

Clinically, late syphilis is characterised by:

In the central nervous system, there is infiltration of the cerebrospinal fluid (CSF) with T. pallidum. Spontaneous clearance can occur. However, without clearance there is risk of ongoing inflammation and subsequent ‘symptomatic neurosyphilis’. Symptomatic neurosyphilis may occur in secondary syphilis (e.g. meningitis, cranial nerve palsies) or tertiary syphilis (e.g. General paresis and tabes dorsalis).

Primary syphilis is characterised by development of a single, painless, indurated ulcer known as a chancre. 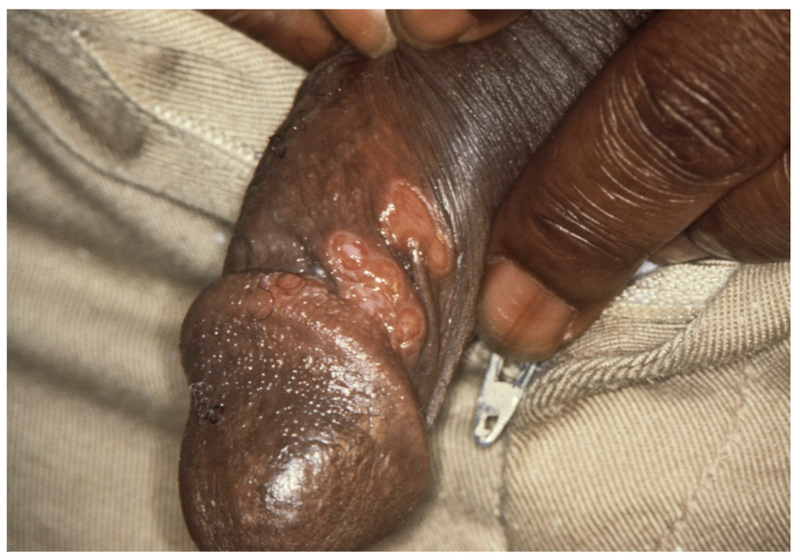 Chancre of primary syphilis located on the penile shaft

Image courtesy of the CDC

Presentation is variable between patients and usually multi-system. There may be no preceding history of a chancre.

*NOTE: Argyll-Robinson pupil is seen in Tabes dorsalis and refers to a mitotic (small) pupil that accommodates but does not react to light. May be unilateral or bilateral.

Serological testing is used to make a diagnosis of syphilis. It is based on the interpretation of two tests:

This refers to two different tests:

These are non-specific tests that assess serum reactivity to cardiolipin-cholesterol-lecithin antigen from an infected or suspected infected patient. Often used as the initial screening test for patients. Positive tests are reported as a titre (e.g. 1:32). Following treatment, the titre of antibody will fall allowing use in patients who have previously been treated for syphilis.

This refers, but not limited to, the following tests:

Detects antibodies that react to specific treponemal antigens. They are more specific, but following infection with T. pallidum they remain reactive life-long, even if the bacteria have been cleared. Reported as a qualitative results (e.g. reactive or non-reactive).

There are different algorithms that can be used to test patients for syphilis depending on whether a nontreponemal or treponemal test is used first. 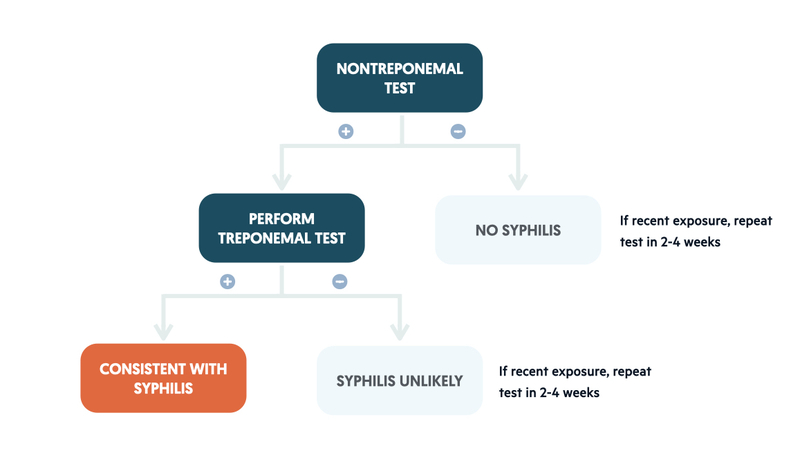 The initial test offered is a nontreponemal test (e.g. RPR). A negative test indicates no evidence of syphilis, but it takes 2-4 weeks for seroconversion (i.e. development of antibodies) following initial infection. Therefore, a repeat test may be warranted.

A positive test should subsequently be confirmed with a treponemal test (e.g. TPPA). 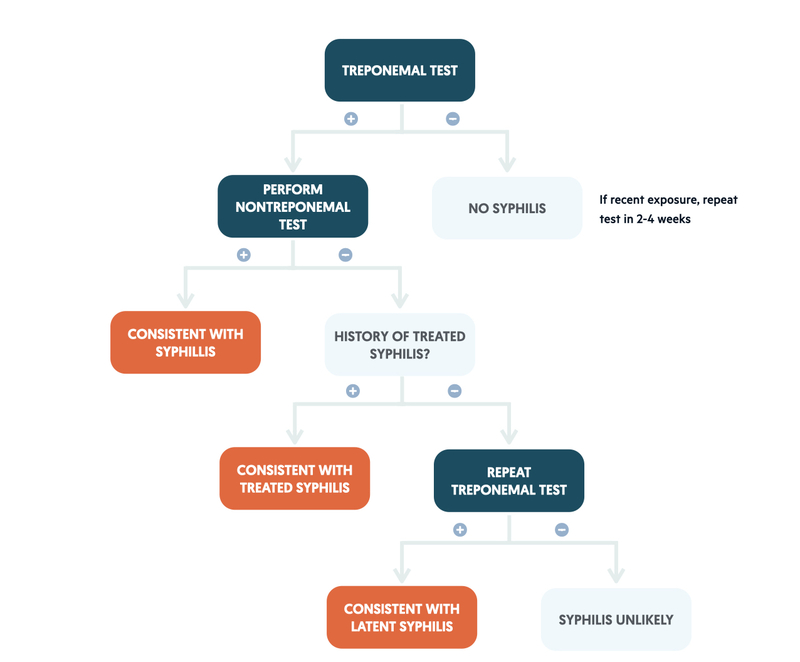 The initial test offered is a treponemal test (e.g. TPPA). A negative test indicates no evidence of syphilis. Remember it takes 2-4 weeks for seroconversion (i.e. development of antibodies) following initial infection. Therefore, a repeat test may be warranted.

A positive test should be confirmed with a non-treponemal test (e.g. RPR).

Dark ground microscopy and polymerase chain reaction (PCR) can be used to detect T. pallidum from swabs or biopsies taken of primary lesions

Asymptomatic patients with high-risk sexual behaviour should be tested for syphilis.

Patients with signs and symptoms of syphilis should be tested for the disease. This includes patients presenting with primary, secondary or tertiary syphilis. For example:

Alternatively, asymptomatic patients who are at high risk of acquiring the disease should also be tested. This includes:

Any patient with a diagnosis of syphilis should also be tested for HIV.

Patients with suspected, or confirmed, syphilis should be tested for other STIs such as chlamydia, gonorrhoea and HIV. Patients should be referred to a genito-urinary medicine (GUM) clinic for treatment. A GUM clinic will help with contact tracing and advice on safe sex.

The role of additional investigations (e.g. bloods, imaging, special tests), depend on the clinical presentation and co-morbidities. Patients with secondary syphilis may need more comprehensive blood tests sending due to the systemic involvement of the illness. In addition, investigations should be tailored to the presenting problem (e.g. hepatitis, meningitis).

Consider neuroimaging and lumbar puncture in patients with suspected neurosyphilis.

The treatment of syphilis is with parenteral penicillin.

Patients with confirmed syphilis on serological testing or those with suspected syphilis based on clinical findings (e.g. chancre, recent exposure) can be given treatment.

Penicillin is the treatment of choice for syphilis, which is given to all stages. However, the dose and course length of penicillin is dependent on the stage.

In patients with a penicillin allergy always confirm the nature of the allergy.  Some patients may have an intolerance rather than overt allergy and administration of parenteral penicillin may actually be appropriate.

It may be necessary to refer patients for allergy testing prior to initiation of treatment. In those with a confirmed allergy, alternative antibiotics choices can be used including doxycyline, ceftriaxone, azthromycin or erythromycin. This is guided by GUM specialists.

This refers to an acute febrile illness that usually presents within the first 24 hours of treatment for syphilis with headache, myalgia, chills and rigors.

The reaction occurs after the initial dose of anti-treponemal treatment. It occurs in 10-35 % of patients and is most common in early syphilis. It usually self-resolves without intervention in 12-24 hours. Anti-inflammatory drugs can be used (e.g. NSAIDs).

Due the potentially life-threatening nature of the reaction in patients with late tertiary cardiovascular or neurosyphilis, steroids are usually recommended (prednisolone 40-60 mg once daily). They are given for three days starting 24 hours before the initial dose of anti-treponemal antibiotics.

We'd love to hear your feedback on our Syphilis notes.