Antiretroviral therapies (ART) have revolutionised HIV care, transforming what was once an almost invariably fatal illness into a treatable chronic disease.

The options available allow for changes to be made in light of resistance patterns, experienced side effects and personal risk factors. As a general rule, regimens consist of:

Patients and clinicians must be aware there are complex interactions between ARTs and many other medications. The Liverpool Drug Interaction Checker is a great tool to evaluate for possible interactions.

ARTs aim to interrupt the HIV replication cycle at various points along its course.

HIV is a lentivirus, a genus within the family of retroviruses. There are two forms of HIV virus:

HIV type 1 has glycoprotein-120 (GP-120), a viral envelope protein, which attaches to cluster of differentiation 4 (CD4) found on a number of immune cells. This process is assisted by binding of a co-receptor on the host cell. There are two major types of virus based on the co-receptor:

Both strains are transmitted but in the early stage of disease the R5 predominates. Interestingly, in the relatively rare occurrence of homozygous deletion of CCR5, patients have a resistance to infection. There is also a dualtrophic strain though we don't discuss that further here.

Once incorporated into the genome its genetic code can be transcribed and translated creating the building blocks for new virions. These are assembled and 'bud' from the host cell before maturing. 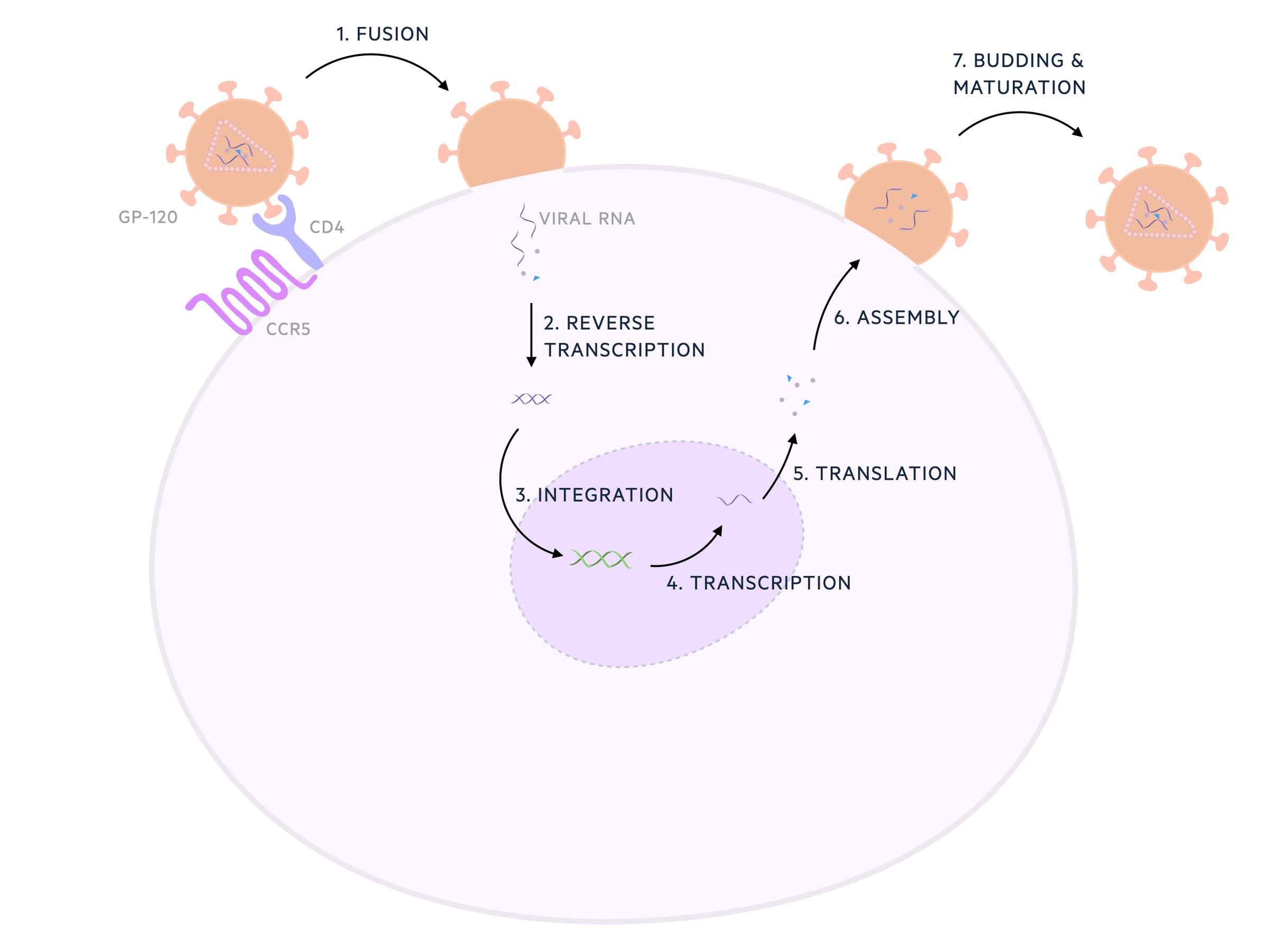 CCR5 is a co-receptor for CD4 allowing the entry of HIV into target cells. CCR5 inhibitors prevent R5 viruses (CCR5 trophic viruses - i.e. HIV strains that use CCR5 as a co-receptor) from entering host cells. Maraviroc is the only agent commonly used in practice.

Prior to use, a tropism assays must be sent as Maraviroc will not be effective against X4 (CXCR4 trophic viruses - i.e. HIV stains that use CXCR4 as a co-receptor) or dual-trophic strains.

Fusion inhibitors (enfuvirtide) block glycoprotein-41 an envelope protein that facilitates the fusion and entry of HIV. Enfuvirtide is given as a twice daily subcutaneous injection.

Dual NRTIs form the backbone of the majority of ART regimens. After undergoing intracellular phosphorylation they bind and inhibit the action of reverse transcriptase. Commonly used examples include:

NRTIs may cause a number of adverse effects as well as being vulnerable to resistant strains. Tenofovir disoproxil fumarate is associated with renal failure and osteoporosis. Lamivudine has been shown to cause pancreatitis, whilst abacavir is avoided in patients with cardiovascular disease. Emtricitabine may cause hyperpigmentation of the palms of hands and soles of feet.

Non-nucleoside reverse transcriptase inhibitors (NNRTIs) may be used as a third agent added to a dual NRTI backbone.

They function by preventing the action of reverse transcriptase. Examples include:

Resistance is a major issue, particularly for first-generation NNRTIs (which both of the above examples are). CNS disturbance and drug induced hepatitis may be seen, as can QT interval prolongation.

They are generally well tolerated but are associated with weight gain. Other adverse effects include psychiatric illness and insomnia.

Inhibition of this process prevents the development of mature viral particles resulting in immature and ineffective viruses. They are given alongside ritonavir - referred to as a boosted PI - which increase the action of the drug.

Examples of commonly used PIs include:

They tend to have a high barrier to resistance and therefore may be preferred in patients where there are concerns regarding adherence. There are many adverse effects including lipodystrophy, hyperlipidaemia, insulin resistance and hepatotoxicity.

There is currently one medication in this class, the monoclonal antibody Ibalizumab. It is given as an IV infusion once every two weeks.

It is not commonly used and is typically reserved for patients with complex resistance patterns.

We'd love to hear your feedback on our Antiretroviral therapy notes.