Tumour lysis syndrome (TLS) results from metabolic disturbances arising from the breakdown of malignant cells following the initiation of treatment for malignancy. 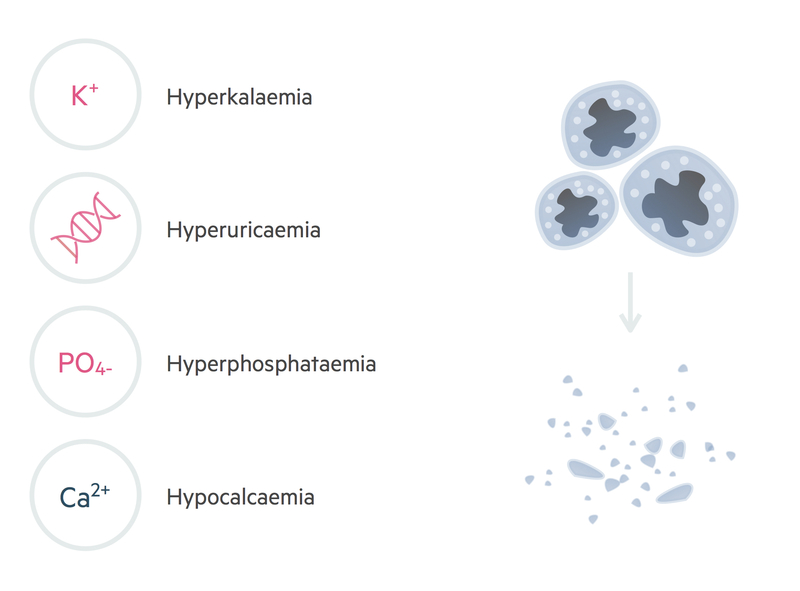 TLS may occur in any tumour type, however, the incidence is greatest with the haematological malignancies. Factors associated with increased risk of TLS include:

Additional clinical factors increase the likelihood of developing TLS include:

Patients who are to receive cytotoxic therapies may be stratified according to risk. Risk stratification helps to assess the need for prophylactic treatment.

Cytotoxic-mediated lysis of tumour cells lead to the release of intracellular components, such as  potassium, phosphate and nucleic acids, into the systemic circulation.

The metabolic consequences of the release of these intracellular components include hyperkalaemia, hyperphosphataemia and hyperuricaemia. Hypocalcaemia develops secondary to hyperphosphataemia with the precipitation of calcium in soft tissues.

Hyperuricaemia occurs due to the metabolism of nucleic acids. Purines within these nucleic acids are metabolised initially to hypoxanthine. Hypoxanthine is then metabolised to xanthine and uric acid by the action of xanthine oxidase. Uric acid is poorly soluble in water, particularly in acidic environments. 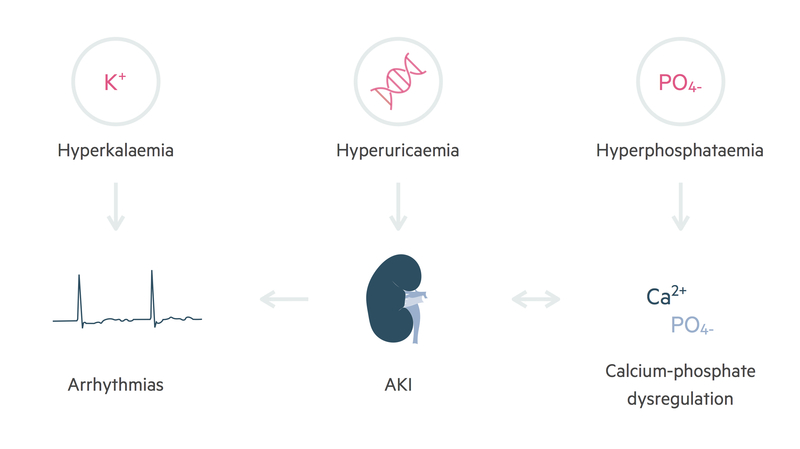 The development of hyperuricaemia and hyperphosphataemia can lead to an acute kidney injury through the precipitation of uric acid and calcium phosphate within the renal tubules.

The incidence of uric acid induced AKI from TLS is decreasing due to the prophylactic use of hypouricaemic agents (e.g. allopurinol, rasburicase).

The clinical features of TLS are generally related to the metabolic abnormalities that occur.

Clinical features tend to develop within the first 72 hours following the initiation of treatment, but they can occur up to 7 days post-treatment. Left untreated, patients with TLS are high-risk of developing cardiac dysrhythmias, seizures, cardiac arrest and death. 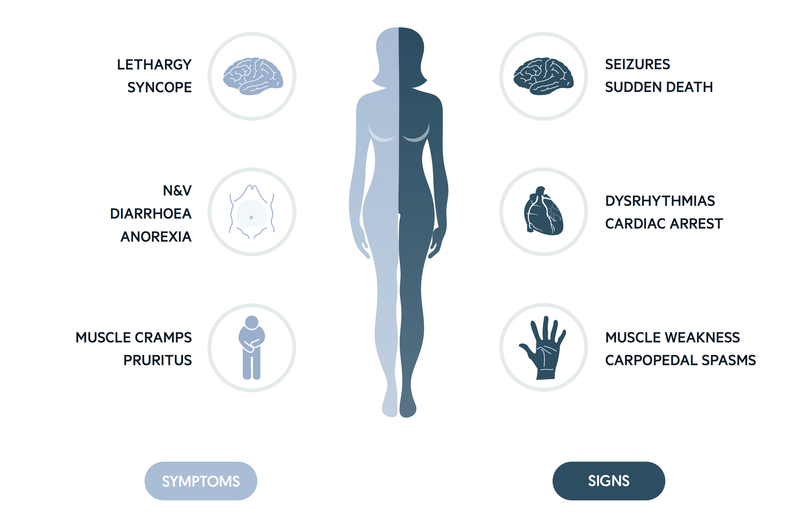 Renal function, electrolytes, and serum urate* are essential tests to diagnose and assess the severity of TLS.

Additional investigations are dependent on the clinical picture, but may include:

*Note: Serum urate levels taken in patients treated with rasburicase should be sent to the lab on ice to prevent falsely low levels.

The diagnosis of TLS is based on the Cairo-Bishop definition.

The Cairo-Bishop definition divides TLS into both a laboratory and clinical definition at presentation and within 7 days of treatment.

Defined by the presence of two or more abnormal serum values that occur three days prior to or seven days after beginning treatment.

The clinical diagnosis of TLS is defined as a patient who meets the laboratory diagnosis with the presence of one or more of the following features that cannot be attributed to by a therapeutic agent:

This Cairo-Bishop definition also incorporates a grading system for the severity of TLS. This system ranges from 0-5 based on the laboratory rise in serum creatinine, the presence of cardiac arrhythmias and the development of seizures.

Hypouricaemic agents prevent hyperuricaemia and the subsequent precipitation of uric acid within the nephrons.

Allopurinol and rasburicase are the two hypouricaemic agents utilised in practice. Both work on the purine metabolism pathway. 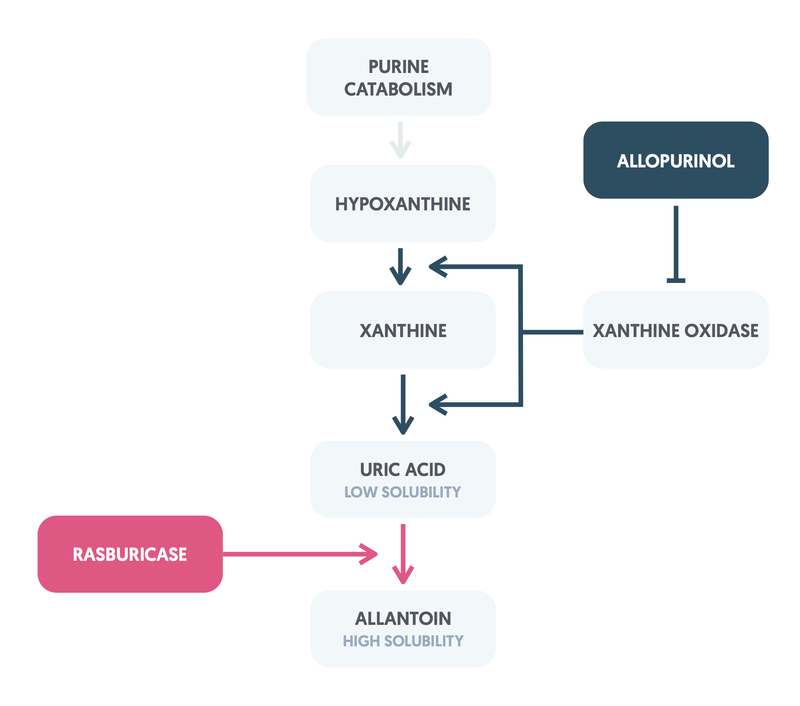 Allopurinol is a xanthine oxidase inhibitor.

Allopurinol does not act on pre-existing uric acid. Its use, therefore, lies in the prophylactic setting.

Urate oxidase is an enzyme found in most mammals but absent in humans. It metabolises uric acid into the soluble allantoin.

Rasburicase, unlike allopurinol, actively lowers uric acid levels and works on established renal deposits. It is therefore indicated both for prophylaxis and treatment.

Rasburicase is contraindicated in patients with G6PD deficiency.

The prevention of TLS requires the risk stratification of patients prior to the initiation of cytotoxic therapy.

Patients are grouped into low, intermediate and high risk (discussed above). Prophylaxis may take the form of oral hydration, intravenous hydration, allopurinol and rasburicase. 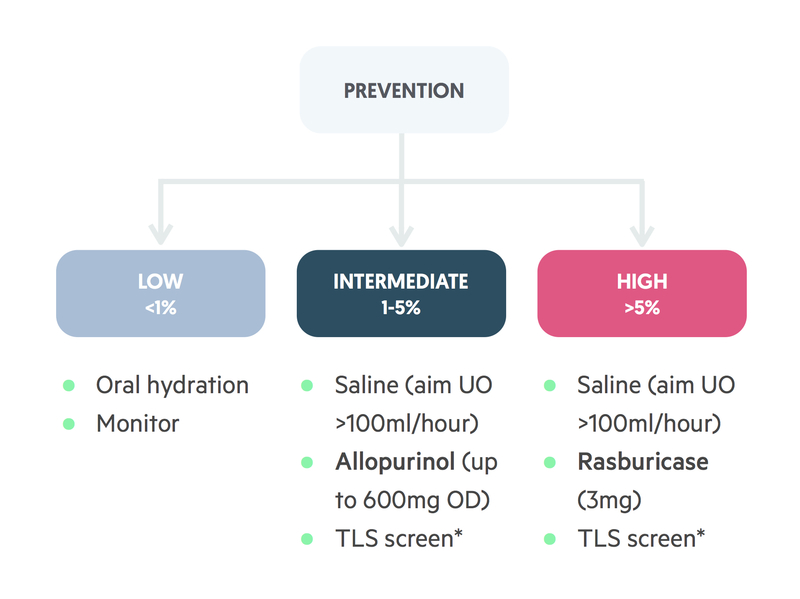 Patients who are considered at a low risk of TLS can be managed with oral hydration without the need for hypouricaemic agents.

These patients should still be monitored for the development of any clinical or biochemical evidence of TLS and treated accordingly.

Patients who are at intermediate risk of TLS should be managed with IV hydration and allopurinol. 300 mg daily for up to 7 days following the initiation of cytotoxic therapy is typical.

Patients who are high risk of TLS should receive IV hydration and rasburicase. The British Society of Haematologists advise a one-off dose of rasburicase of 3mg.

Further administration of rasburicase can be considered depending on the biochemical response.

Management centres around the treatment of hyperphosphataemia, hyperkalaemia, hypocalcaemia and renal impairment.

Hyperphosphataemia requires adequate hydration and dietary restriction. Phosphate binders may be used. In severe cases, patients may require haemofiltration. Correction of phosphate is important in preventing calcium phosphate precipitation that may worsen AKI.

Hyperkalaemia should be managed according to the level of potassium and the presence of ECG changes. Treatment includes IV calcium gluconate, insulin/dextrose infusion and nebulised salbutamol. The British Society of Haematology advise cardiac monitoring for patients with potassium levels > 6 mmol/L or with a 25% increase compared to their baseline.

Correction of hypocalcaemia may result in increased calcium phosphate deposits in the kidney. In light of this asymptomatic hypocalcaemia should not be treated. The British Society of Haematology advise cardiac monitoring for patients with calcium levels < 1.75 mmol/L or a 25% decrease compared to their baseline. In the presence of symptoms or arrhythmias, IV replacement to treat symptoms is appropriate. 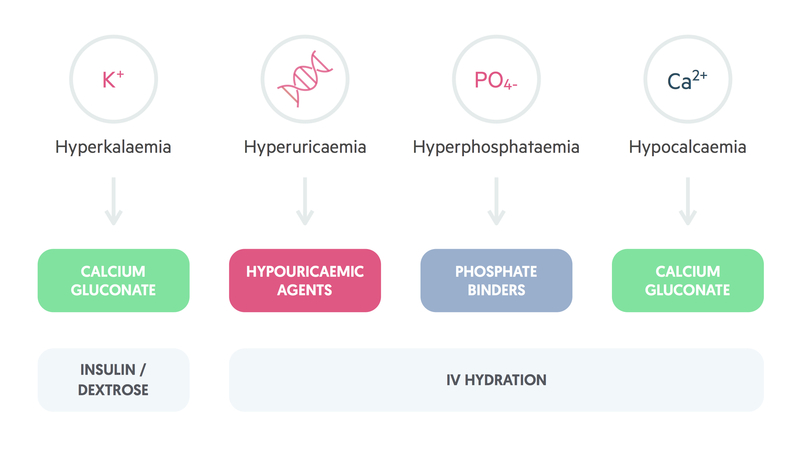 Renal impairment is managed with fluids rehydration, adjustment of drug doses and escalation to haemofiltration if needed.

Some indications for haemofiltration in TLS include:

We'd love to hear your feedback on our Tumour lysis syndrome notes.