Schizophrenia, a form of psychosis, is characterised by distortion to thinking and perception and inappropriate or blunted affect.

Schizophrenia is the most common form of psychosis with an onset that is typically early in life (15 to 35). It is a chronic condition with a course characterised by episodes of acute psychosis.

Features that are common to psychoses are:

Management may include therapies (e.g. cognitive behavioural therapy) and medications (antipsychotics). There is an increased risk of suicide and cardiovascular disease in patients suffering from schizophrenia.

In the UK, approximately 0.5%-1% will be diagnosed with a psychotic disorder during their lifetime.

Diagnosis is typically between the ages of 15 and 35. There have been some indications that those of south Asian or black heritage have an increased prevalence of schizophrenia. This is however disputed and may be related to cultural biases.

The prevalence is the same for men and women, though women tend to present when older (peak in the late twenties, compared to a peak in the early twenties in men).

The development of schizophrenia is complex, poorly understood and likely involves a myriad of factors and systems.

Studies using MRI scans of the brain have shown differences in the anatomy of some patients with schizophrenia compared to those without it. It appears these changes progress over time. Common findings include increased size of the ventricles and reduced whole-brain volume.

The function of antipsychotics as antidopaminergic is indicative of abnormalities in the action, production or breakdown of neurotransmitters. Increased activity of dopamine in the mesolimbic region is associated with symptoms of psychosis. It is likely numerous other neurotransmitters are involved in the pathogenesis.

Another area of research is the effect of abnormal immune function on the development of schizophrenia. Immune ‘triggers’ such as prenatal viral infections are being investigated as possible causes.

A number of risk factors have been associated with the development of schizophrenia.

It should be noted, it can be challenging to determine whether a factor is truly causative or just an association. Furthermore, it is difficult to say whether the association occurred prior to or because of the development of schizophrenia.

ICD-10 can be used to give a framework for diagnosis.

In patients suffering from a psychotic episode lasting for at least one month, schizophrenia may be diagnosed if one (or more) of the following is present:

Or it may be diagnosed in patients suffering from a psychotic episode lasting for at least one month if two (or more) of the following are present: 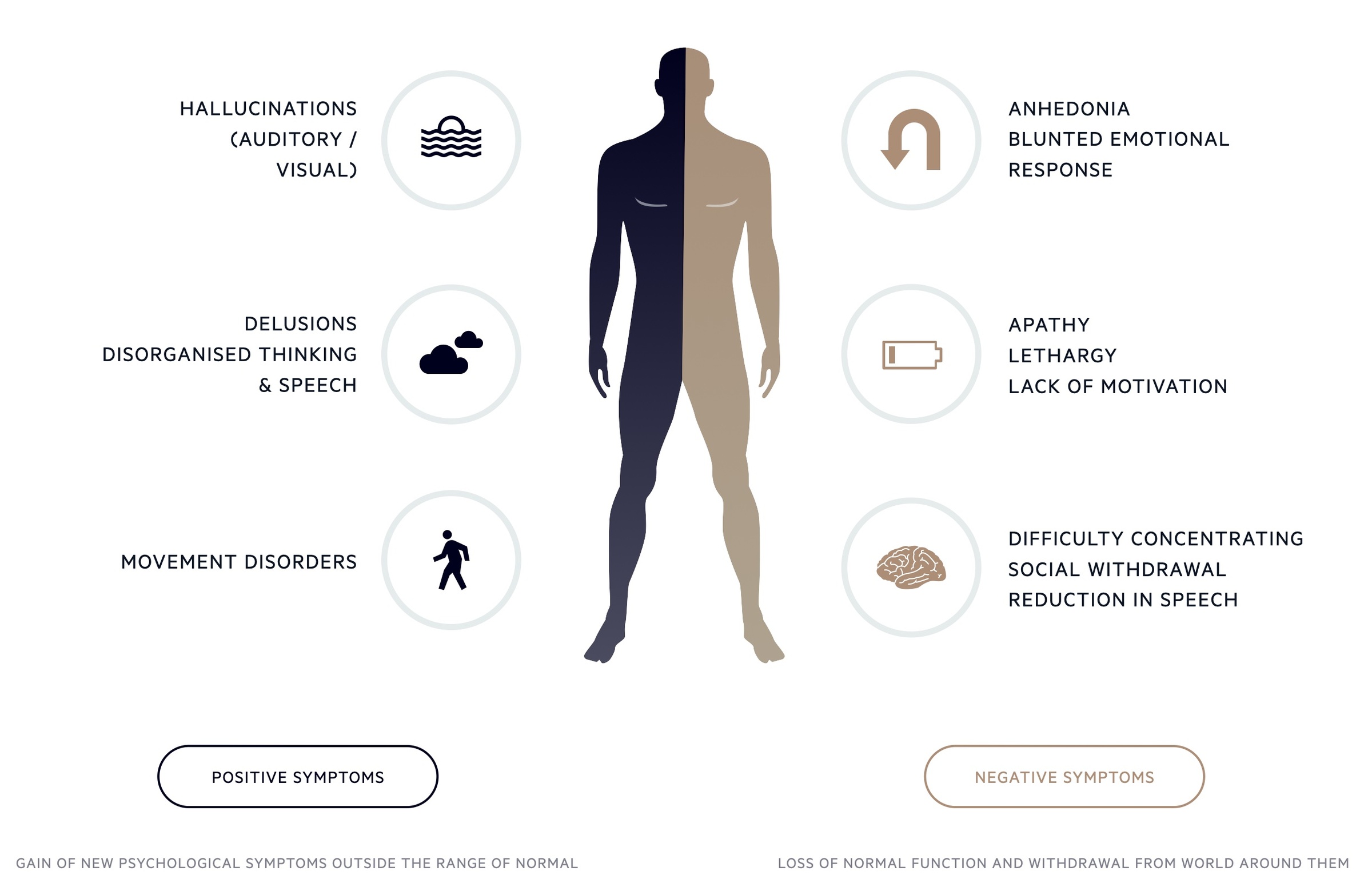 There are a number of exclusions, and areas where the presentation may mimic other mental health illnesses.

The episode should not be attributable to organic brain conditions (e.g. encephalitis), or to substance misuse, intoxication, dependence or withdrawal.

There are a number of subtypes differentiated by unique characteristics.

It is essential that other causes of similar presentations are excluded prior to final diagnosis.

Schizophrenia is a clinical diagnosis made in the presence of characteristic features. Other conditions may cause similar presentations and these need to be excluded. Attempts should be made to rule out infection, metabolic abnormalities and organic brain disease where suspected.

In particular, there is increased interest around autoimmune encephalitis (in particular anti–NMDA receptor encephalitis) and how its presentation can mimic psychosis and schizophrenia. Typically other neurological signs develop or accompany the presentation however these can be absent.

Not all of the below investigations may be necessary and instead, they would be guided by each individual presentation, history and examination.

Blood, hair or urinary screens may be used for illicit drugs and alcohol, particularly in those presenting with acute psychosis of unknown cause.

Depending on the presentation CT, MRI head or EEG may be ordered. Serum markers of autoimmune encephalitis can be sent as well as lumbar puncture and CSF sampling if indicated

They advise referral to specialist services in patients who are distressed with declining social function and:

Any treatment is guided by an experienced specialist but can include cognitive behavioural therapy and family interventions. Treatment for anxiety, depression and other co-existing conditions should be considered.

In those presenting with a new episode of psychosis, early intervention in psychosis teams are often used to co-ordinate and direct care.

Adult patients should be asked about suicidal thoughts and ideation as well as self-harm. This is a key part of any assessment.

In addition risk to others must be assessed. Harm may be unintentional but result in neglect or intentional (in the context of their disease).

Any patient deemed to be at risk should be discussed immediately with the local specialist mental health services for further assessment and a management plan.

Schizophrenia affects people from all races, cultures and ethnicities. Different cultural norms may result in different presentations and experiences.

Healthcare professionals should be trained and able to understand and assess people from diverse backgrounds. Experience is needed in how this may impact the experience of symptoms and treatments.

EIP teams are often the first group to review patients with a new episode of psychosis or schizophrenia.

The teams consist of psychiatrists, psychologists, community psychiatric nurses, social workers and support workers. They may continue to see the patient for up to three years.

Any history of drug use or trauma should be addressed. Social networks, family life may be discussed as well as support mechanisms. Assessment should include education, occupation and economic status domains.

A care plan is made in conjunction with the patient, who should be aware of the likely diagnosis and benefits of each management plan. The care plan should include a crisis plan, advanced statement (from the patient on how they want to be treated when acutely unwell) and key contacts.

Oral antipsychotics form a key component in the management of many patients with schizophrenia.

Antipsychotics should normally be started in secondary care. They may be used in conjunction with psychological therapies or alone.

Prior to starting an antipsychotic NICE recommend the following are recorded:

The following assessments should be recorded:

In addition, the following blood tests are advised:

An ECG should be organised in patients depending on antipsychotic choice (some are associated with long QT), history or examination findings suggestive of cardiovascular disease or the patient is being admitted to hospital.

There are two generations of antipsychotics, often referred to as typical and atypical.

Many prescription, over the counter and illicit drugs can interfere with antipsychotics and this should be reviewed. In particular, smoking can impact the efficacy of antipsychotics (particularly clozapine and olanzapine) and discussions regarding cessation should be had.

NICE advise that starting antipsychotics should be considered an 'explicit individual therapeutic trial'. It does not determine that one drug or generation should be used in particular but instead, the individual merits and side effects should be discussed with each patient, and a collective decision reached.

Doses tend to be chosen from the lower end of the licensed range and gradually titrated upwards. Close monitoring is required to pick up developing side effects and the following monitoring is also advised:

NICE does advise the use of clozapine if the patient has failed to respond adequately to 2 different antipsychotics (one of which is an atypical antipsychotic that is not clozapine). The risk of neutropenia and agranulocytosis is high and close monitoring (and regular FBCs) is required.

Antipsychotics can be given as a depot or long-acting injectable. They may be used when it is the patient's preference or where avoiding covert non-adherence is ‘a clinical priority within the treatment plan’.

Once stabilised on an antipsychotic, treatment cessation is associated with an increased risk of relapse. In particular NICE advises there is a high risk of relapse if treatment is stopped in the first 1-2 years.

If the decision is made to stop the antipsychotic, this should be a supervised gradual withdrawal. Patients need to be followed up for signs of relapse for at least 2 years after stopping medication.

Cognitive behavioural therapy (CBT) and family interventions may help those suffering with schizophrenia.

Patients are normally advised to use psychological therapies in conjunction with an antipsychotic. Some may want to use them independently (CBT or family intervention), in this setting NICE advise:

Schizophrenia is a chronic disease that has a fluctuating and varied course.

A number of factors are associated with a poor prognosis, including substance abuse, early-onset, poor treatment adherence, poor cognitive skills and certain genetics.

Around 10-15% have persistent psychotic features following on from an acute episode. They may require institutional care and those with schizophrenia die, on average, 9-15 years earlier than the general population. The lifetime risk of suicide is increased and estimated at 5%. In addition patients are more likely to suffer with T2DM, cardiovascular disease and have negative lifestyle factors like smoking and poor diet.

We'd love to hear your feedback on our Schizophrenia notes.