Thyroid cancer accounts for around 1% of new malignancies in the UK each year.

Thyroid cancer refers to a group of malignant conditions affecting the thyroid gland. They most commonly present with a thyroid lump and are diagnosed following triple assessment.

Surgical resection (thyroidectomy and hemithyroidectomy) is the mainstay of treatment. Prognosis is related to the type, stage and age at diagnosis.

This note will focus primarily on the diagnosis and management of papillary and follicular thyroid cancer (together often referred to as differentiated thyroid cancers). 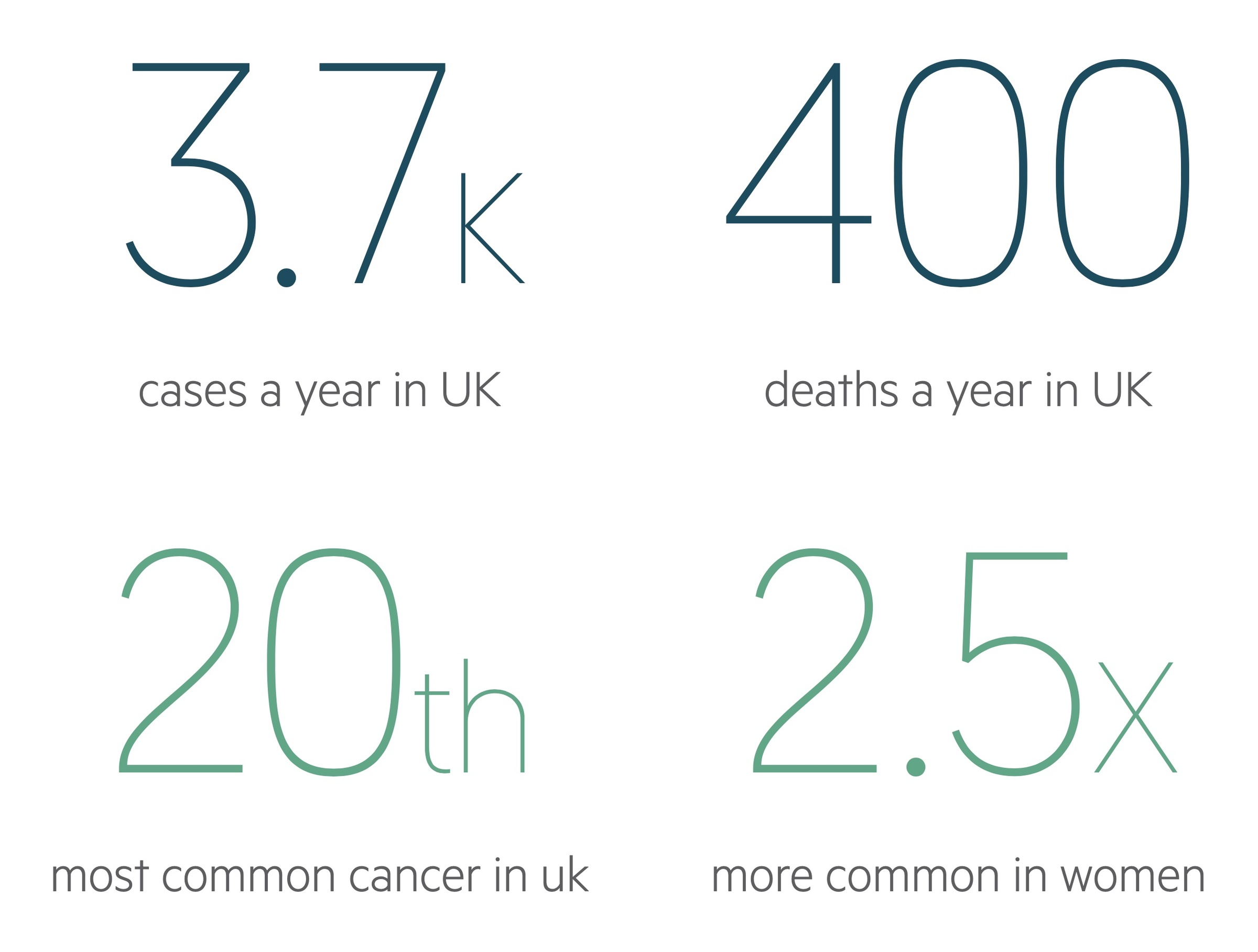 There are approximately 3,900 diagnoses of thyroid cancer in the UK each year.

It is more common in women who make up 70-75% of new diagnoses. Overall it is the 20th most common cancer in the UK.

Yearly figures show that over the past decades there has been a gradual increase in cases in both men and women.

Papillary and follicular are the most common types of thyroid cancer.

We can broadly divide the types of thyroid cancer into:

Papillary is by far the most common type of thyroid cancer, accounting for around 70% of cases, whilst follicular accounts for 10-20%. Together, papillary and follicular cancers may be referred to as differentiated thyroid cancer.

Anaplastic cancer is far rarer accounting for around 2% of all thyroid tumours. They have a far graver prognosis developing rapidly with aggressive local spread. Median survival is just 3-8 months.

These are neuroendocrine tumours originating from parafollicular C cells. In 75% of cases, they are sporadic but the remaining 25% are associated with MEN type 2 and mutation of the RET proto-oncogene.

This is a rare condition accounting for approximately 2% of thyroid cancers. It typically occurs on a background of Hashimoto’s thyroiditis. Treatment tends to consist of radiotherapy, chemotherapy or a combination of the two.

There are a number of risk factors associated with the development of papillary and follicular thyroid cancer.

The major risk factors are:

The most common presentation of differentiated thyroid cancer is a thyroid nodule/mass.

The majority (90-95%) of those with a thyroid lump will have benign disease, however, further workup is often needed. Clinical features that may be seen include:

Any patient with suspected thyroid cancer should be referred on a two-week wait pathway. 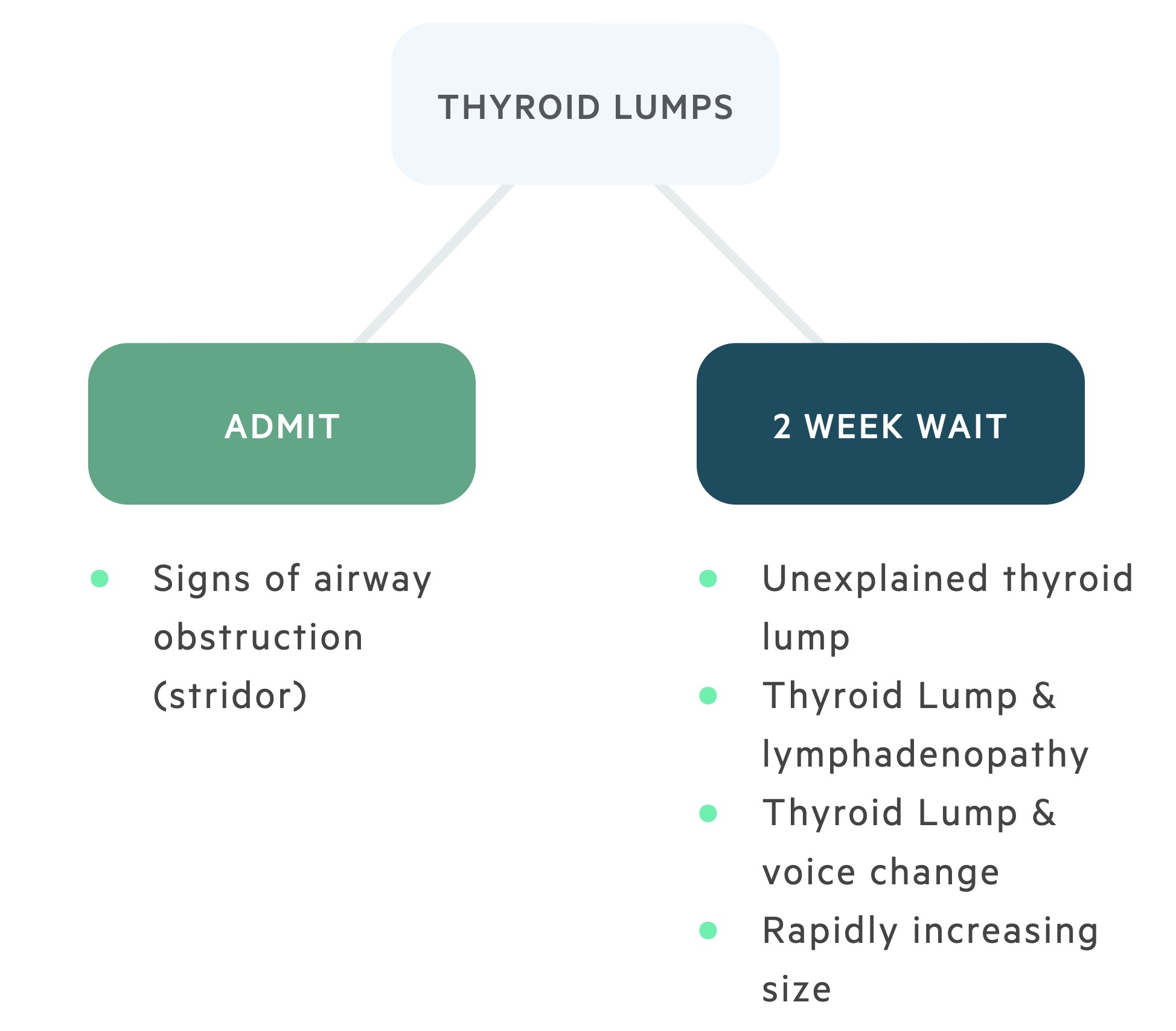 Remember - if there are signs of upper airway obstruction such as stridor arrange for urgent hospital admission and ENT review.

All patients should have a full clinical review including a medical history (carefully evaluating family history and any exposure to radiation). This is followed by a clinical examination looking for signs of thyroid hormone imbalance and lymphadenopathy as well as evaluating the nodule itself. Thyroid function tests (TFTs) should be sent if not already by the referring clinician.

Ultrasound is the imaging modality of choice for thyroid lumps. A score U 1-5 is given based on the radiographical appearance of the nodule.

In addition, any lymphadenopathy, retrosternal extension or tracheal compression should be commented upon.

FNAC should be carried out on all U 3 – 5 lesions. Patients with U 1 and U 2 lesions do not need FNAC unless considered high risk for malignancy.

FNAC allows for cytological assessment of a thyroid nodule. Reports may classify results as:

The triple assessment described above is the most important set of pre-operative investigations.

All patients will have an USS, TFTs and cytology result prior to any operative procedure. In those with extra-thyroidal extension or lymph node involvement, additional imaging in the form of MRI or CT may be arranged. Suspicious lymph nodes may be sampled with FNAC.

Patient-specific investigations can be organised depending on specific risk factors as part of routine operative pre-assessment (e.g. echocardiogram).

Patients who have Thy3f cytology that cannot differentiate between follicular cancer and benign lesions may need a diagnostic hemithyroidectomy.

Those with Thy3f cytology generally need a diagnostic hemithyroidectomy (following case discussion at MDT). The tissue is sent for histology and if cancer is found a completion thyroidectomy may be completed following discussion with the patient and at MDT. Intra-operative frozen section is not used for follicular lesions.

Intra-operative frozen section may be completed on small, discrete lesions suspicious for papillary cancer with Thy4 cytology. This can allow single-stage surgery.

Total thyroidectomy is commonly performed but increases the risk of hypoparathyroidism (see below). Hemithyroidectomy may be considered in those with small, unifocal tumours without extra‐thyroidal spread.

Serum calcium (+/- PTH) is monitored post-operatively. Normally that evening and the following morning at a minimum. Ongoing testing will depend on the levels.

It is generally considered good practice to formally evaluate vocal cord function post-operatively with Fiberoptic Nasendoscopy (FNE). The is to confirm the normal function of the vocal cords and recurrent laryngeal nerve.

Damage to the recurrent laryngeal nerve results in vocal cord dysfunction. This may present as a change in the character of a patient's voice. Bilateral injury can threaten the airway and present with stridor - a medical emergency. 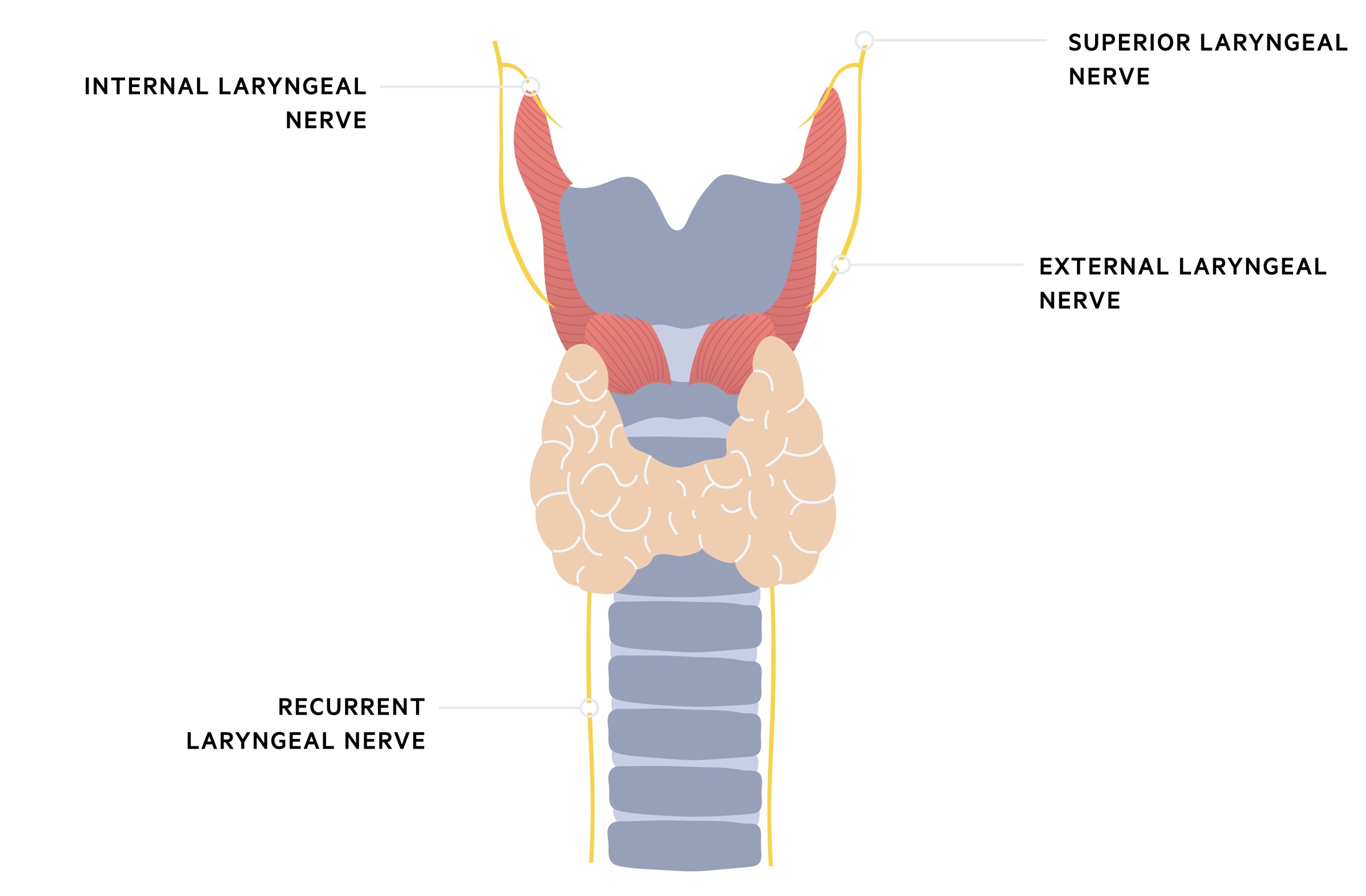 Rarely post-operative bleeding leads to the development of a haematoma in the neck. There is limited space for expansion and increasing pressure can threaten the airway.

An immediate medical emergency call should be put out and the surgical ward cover will re-open the neck on the ward if the airway is compromised. The patient will need to return to theatre for haemostatic control.

Thyroidectomy risks the removal, de-vascularisation or damage of the parathyroid glands. These glands produce parathyroid hormone, a key hormone in calcium homeostasis.

Around 30% of patients will need calcium (+/- alfacalcidol) supplementation after a total thyroidectomy. This hypoparathyroidism is normally transient with less than 10% affected at 3 months. 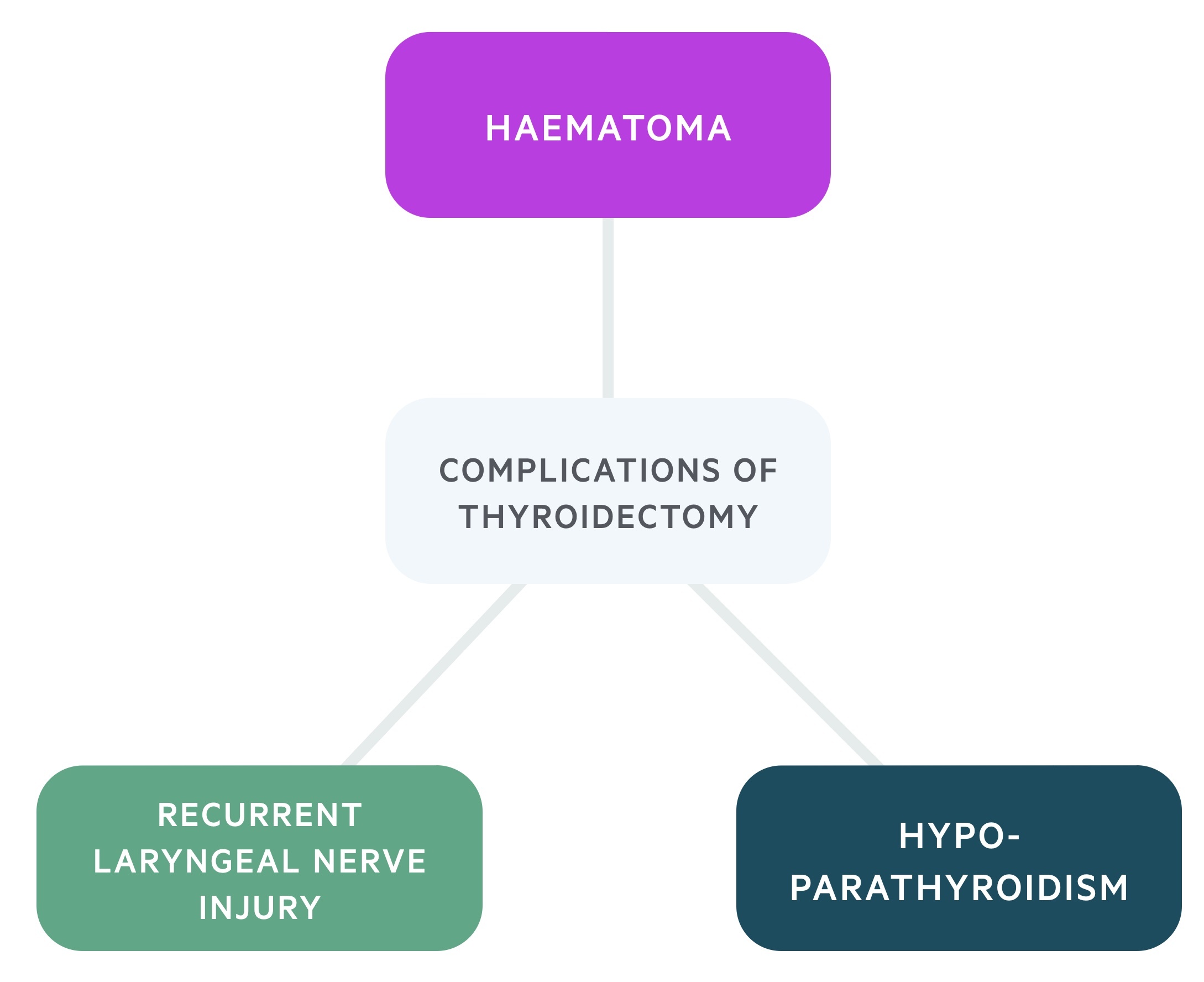 Adjuvant therapy may be used to increase the chance of cure or long-term remission.

131Iodine mediated destruction of remnant thyroid tissue can be used as an adjunct to total or near-total thyroidectomy. The decision to use radioiodine remnant ablation is taken by MDT with reference to the patient's wishes.

It may also be used in the palliative setting, particularly in cases of bone/spinal and brain metastasis.

TSH suppression and thyroglobulin monitoring can be used to aid management.

Suppression of TSH with supra-normal levels of levothyroxine can reduce the risk of recurrence. This treatment is not without risks, including osteoporosis, AF and cardiovascular disease.

The decision to offer suppression is made by specialist MDT taking into account a myriad of factors.

Thyroglobulin is a large glycoprotein produced by both normal and cancerous thyroid cells. It can be measured postoperatively to assess for residual tissue or recurrent disease. It is normally first measured 6 weeks after surgery.

In patients who have not had total thyroidectomy and radioiodine remnant ablation, it can be difficult to differentiate between residual tissue, residual disease or recurrent disease. Serial measurement and trends can be helpful.

As with most malignancies prognosis is related to stage and age at diagnosis.

According to figures from Cancer Research UK overall:

Prognosis is better for younger and female patients, almost everyone diagnosed aged 15-49 survives their disease for five years or more.

We'd love to hear your feedback on our Thyroid cancer notes.