Several classic syndromes that have characteristic clinical features based on the area of the spinal cord that is affected.

Neurological signs and symptoms can usually be located to the spinal cord based on the presentation of bilateral motor and sensory signs without head or face involvement.

In some situations, a specific set of clinical features can develop due to the area within the spinal cord that is affected. These are known as the spinal cord syndromes. We discuss some of the more common ones below.

The spinal cord is part of the central nervous system (CNS) and forms the main communication between the brain and peripheral nerves.

The spinal cord originates at the base of the medulla oblongata, exiting the skull through the foramen magnum. It then extends through the spinal canal and ends at the level of the L1/L2 spinal vertebrae. 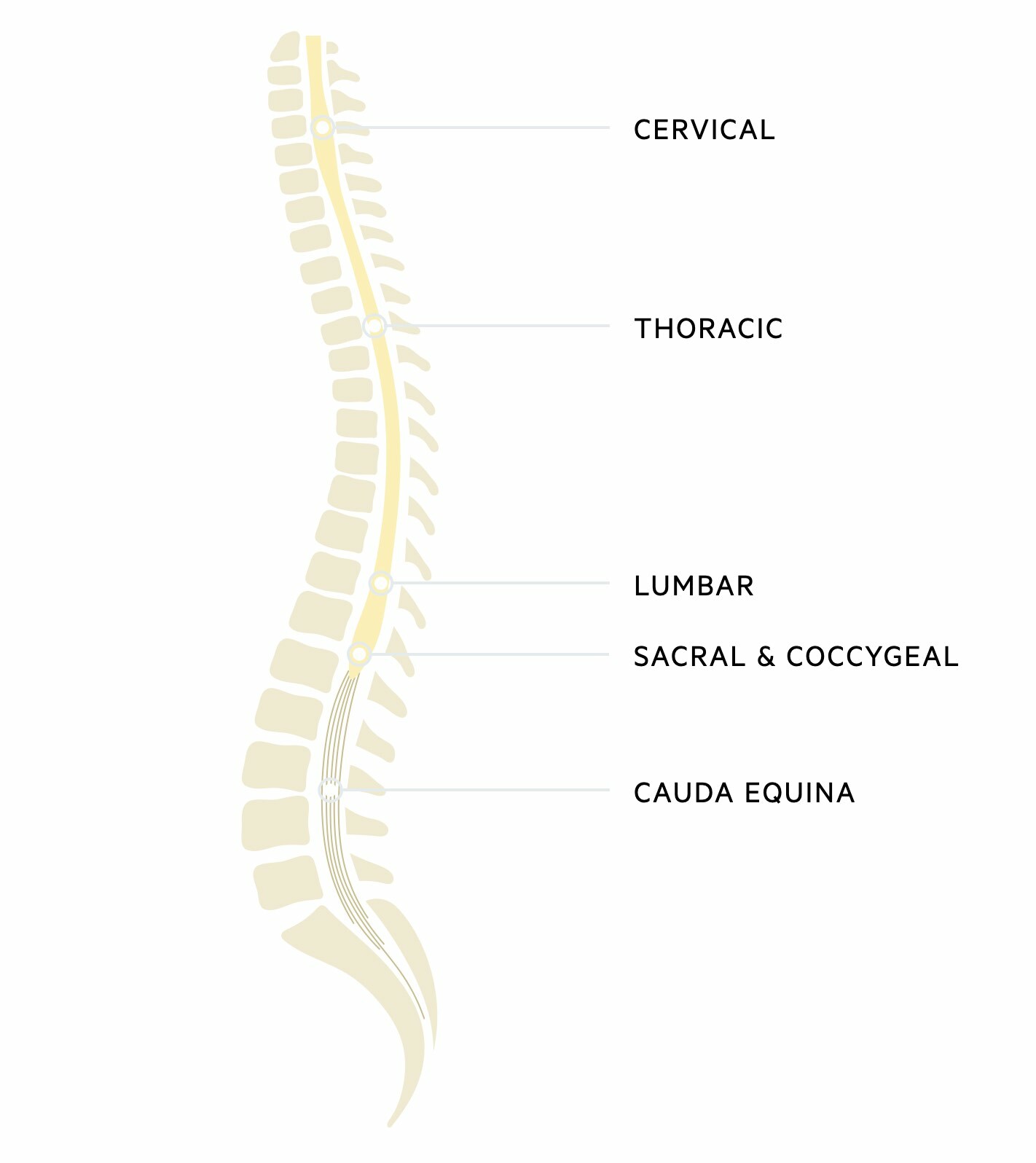 The terminal end of the spinal cord is termed the conus medullaris. Beyond this is a collection of spinal nerves composed of lumbar, sacral, and coccygeal nerves. Together these make up the cauda equina. These nerves have important innervation for lower extremity motor function, perianal sensation, and parasympathetic sensation to the bladder and bowel including the sphincters.

The spinal cord is supplied by three longitudinal arteries

As the arteries course down the cord, many arteries including the cervical, intercostal and lumbar provide contributions that reinforce the arterial supply. A major contribution to the anterior spinal artery within the thoracolumbar region is a vessel known as the spinal artery of Adamkiewicz. This may become affected in aortic disease leading to neurological symptoms (e.g. thoracic aortic dissection). 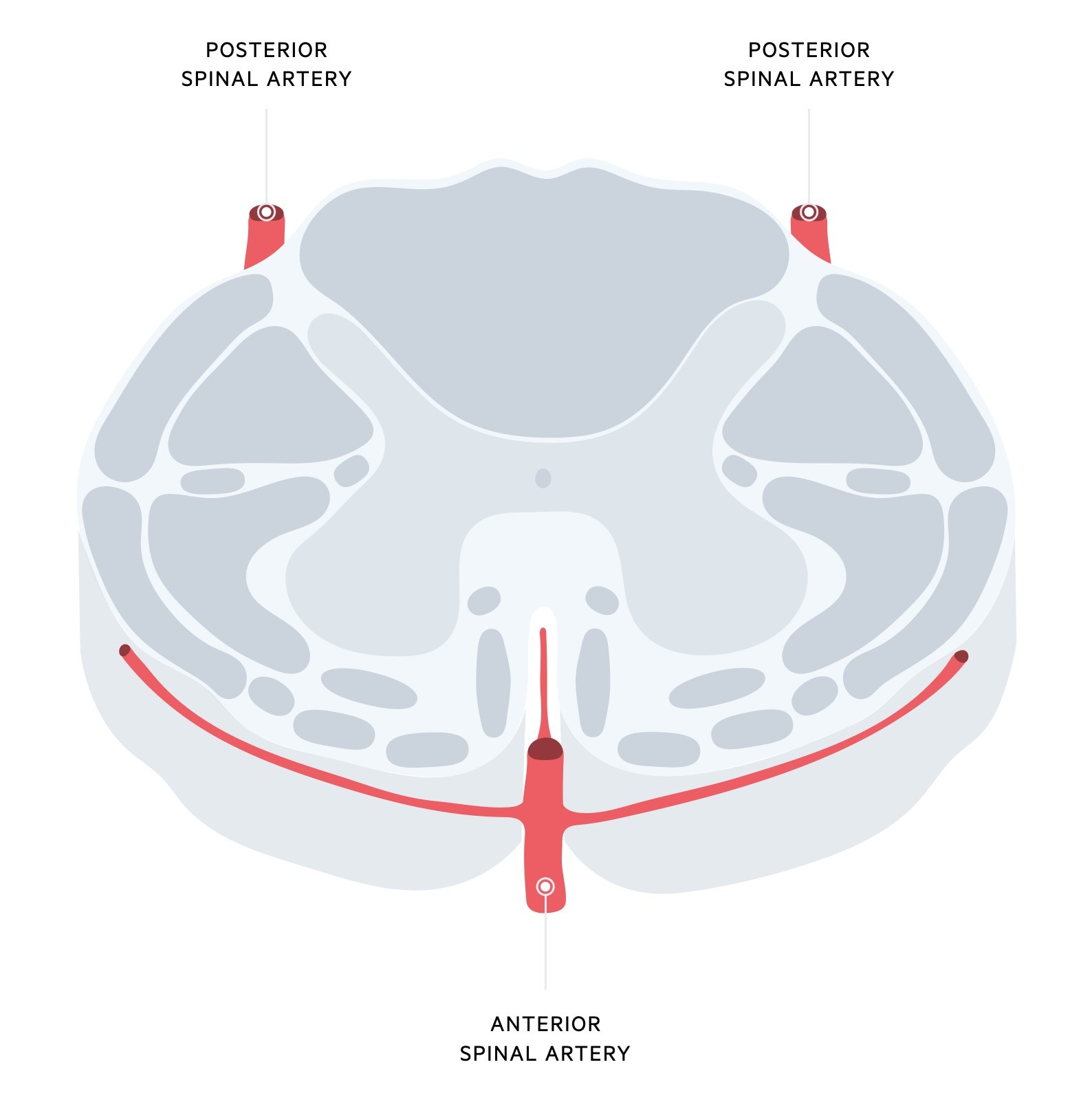 The spinal cord has many bundles of nerves called tracts that transmit information from the brain to peripheral tissue. 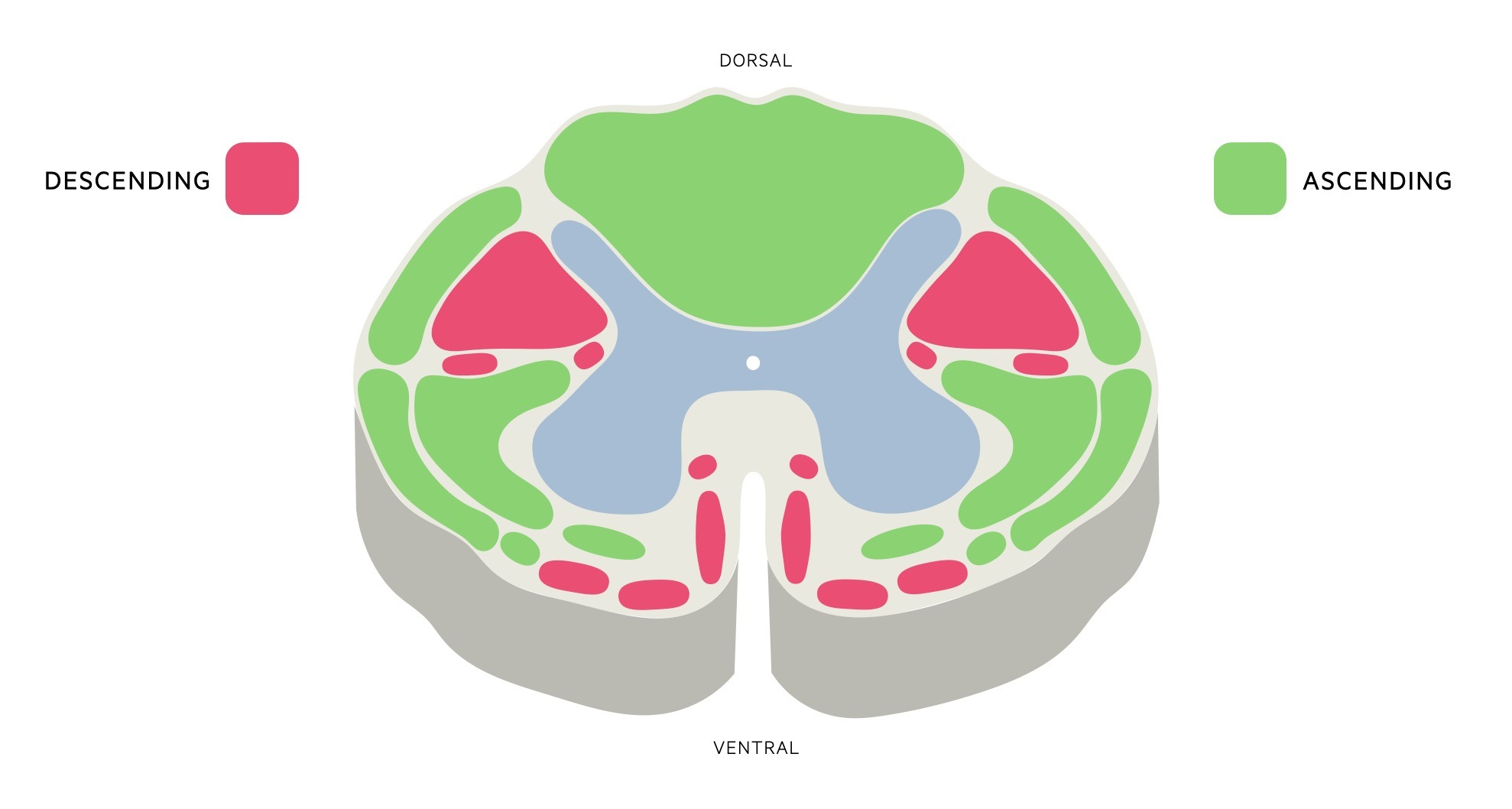 Each tract is bilaterally paired. Importantly, many of these tracts cross from left to right or right to left at different points along the spinal cord or in the brain stem. This crossing is known as ‘decussation’ and means that information from the right hemisphere of the brain is transmitted to the left side of the body and vice versa.

We discuss some of the more common tracts to help us understand the spinal cord syndromes.

These are ascending tracts that carry information about pain, temperature, and crude touch from our skin to the thalamus in the brain. It is composed of two major pathways:

Sensory receptors pass information to the dorsal root ganglia. Located in the dorsal root ganglia is a pseudounipolar (first-order) neuron with a distal axon that extends to the site of sensory receptors and a central neuron that enters the spinal cord. This central neuron synapses with second-order neurons in the gray matter. This second-order neuron then crosses to the opposite side and travels up the spinal cord in the spinothalamic tract. They synapse with third-order neurons in the thalamus.

These are ascending tracts that carry information about fine (i.e. light) touch, vibration, and proprioception (i.e. spatial location of body parts). It is located in the dorsal part of the spinal cord, hence the name. The dorsal columns are divided into two components:

Sensory receptors from the skin and joints send information to the dorsal root ganglia via the distal axon of the pseudouniploar (first-order) neuron. Here, the central axon of these neurons enter the spinal cord and the majority enter the dorsal columns and ascend (without synapsing) to reach the medulla oblongata. They synapse with nuclei of second-order neurons within the caudal aspect of the medulla, which then crosses the midline (decussate). Fibres then travel through the brainstem via the medial lemniscus pathway that synapses with third-order neurons in the thalamus.

Thus, fibres cross at the level of the brainstem.

These are descending tracts that carry important information for voluntary motor control. They are also known as the ‘pyramidal tracts’ due to the large pyramidal decussation within the medulla oblongata. This tract is divided into two components:

Thus, fibres predominantly cross at the level of the brainstem.

Injuries to the spinal cord may be complete or incomplete.

A complete cord syndrome is characterised by a complete loss of function (motor/sensory) below the level of the lesion.

An incomplete cord syndrome is characterised by variable neurological function below the level of the injury depending on the area of the cord that is affected.

A clinical syndrome due to damage to the posterior aspect of the spinal cord.

Posterior cord syndrome, also known as dorsal cord syndrome, is a rare syndrome due to injury of the posterior aspect of the spinal cord. This area is predominantly housed by the dorsal columns that are ascending tracts carrying information on light touch, proprioception, and vibration. 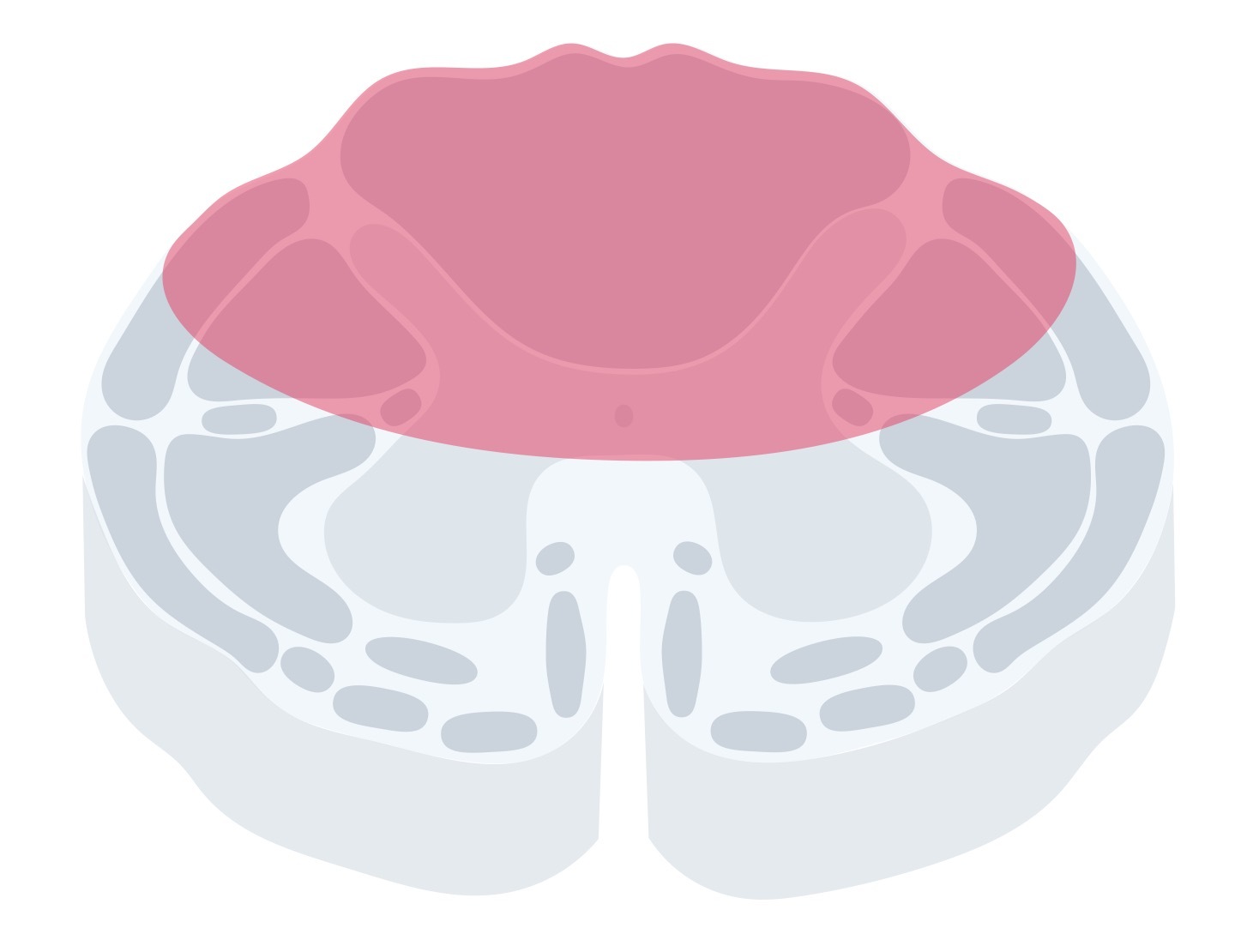 The syndrome is characterised by gait ataxia (abnormal, uncoordinated gait with a wide base and irregular foot placement), abnormal vibration sense, and paraesthesia below the level of the injury.

In large lesions, it may involve the lateral corticospinal tracts leading to weakness.

Many conditions can cause posterior cord syndrome. Some may cause an acute injury, whereas others are slowly progressive.

A clinical syndrome due to damage to the anterior two-thirds of the spinal cord.

Anterior cord syndrome, also known as ventral cord syndrome, refers to damage to the anterior two-thirds of the spinal cord irrespective of aetiology. This area contains many important tracts leading to a wide range of symptoms including the corticospinal tracts, spinothalamic tracts and autonomic tracts important for bladder control. 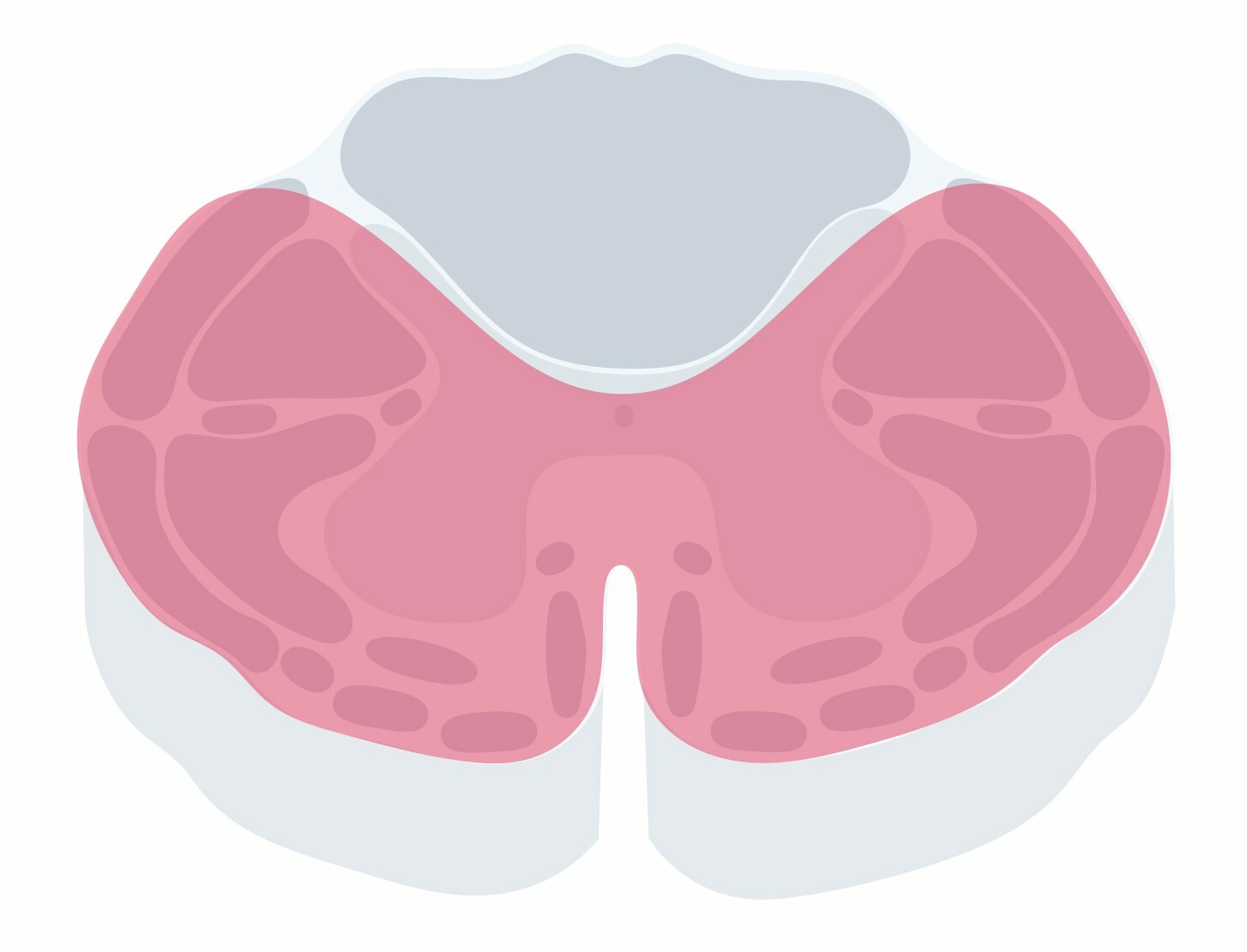 The syndrome is characterised by a broad range of clinical features:

Alternatively, any pathology that damages the anterior spinal cord can lead to the syndrome:

A clinical syndrome due to hemisection of the cord.

Brown-Sequard syndrome, also known as hemisection of the cord, is a classic cord syndrome that results in ipsilateral (same side as the lesion) weakness and proprioception/vibration loss, and contralateral (opposite side to the lesion) pain/temperature loss. It is typically due to damage to one-half of the cervical or thoracic spinal cord. 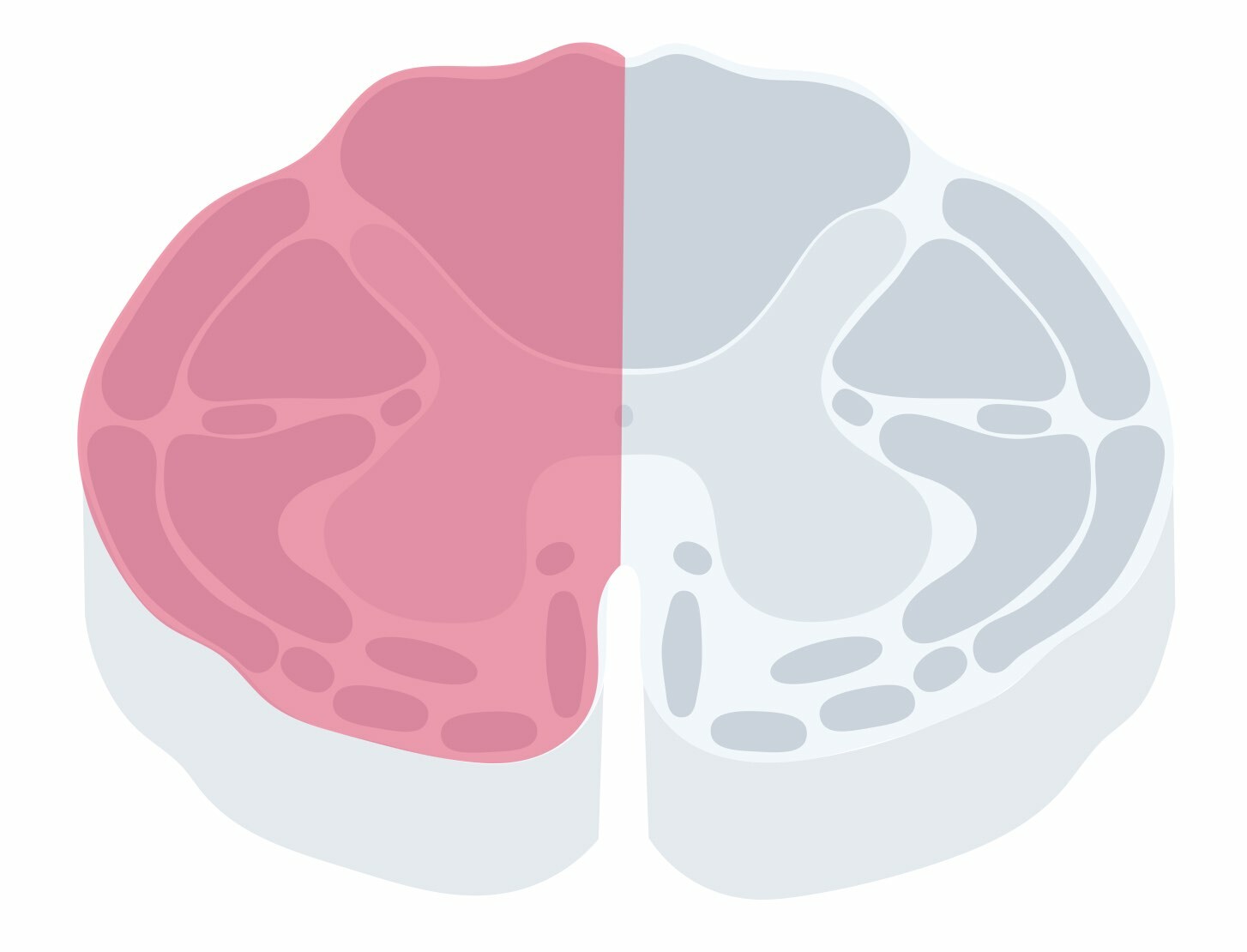 Brown-Sequard is a rare cord syndrome that presents with symptoms affecting different sides of the body due to the decussation (i.e. crossing) of tracts at different levels.

Brown-Sequard syndrome is commonly due to trauma.

Numerous non-traumatic causes may lead to Brown-Sequard syndrome such as disc disease, multiple sclerosis, or tumours.

A clinical syndrome commonly due to a hyperextension injury of the neck.

Central cord syndrome is a common spinal cord syndrome that is often the result of a traumatic hyperextension injury within the cervical spine. Weakness and sensory changes occur because it affects the medial aspect of the corticospinal tract and the crossing fibres of the spinothalamic tracts (crude touch, pain, temperature). 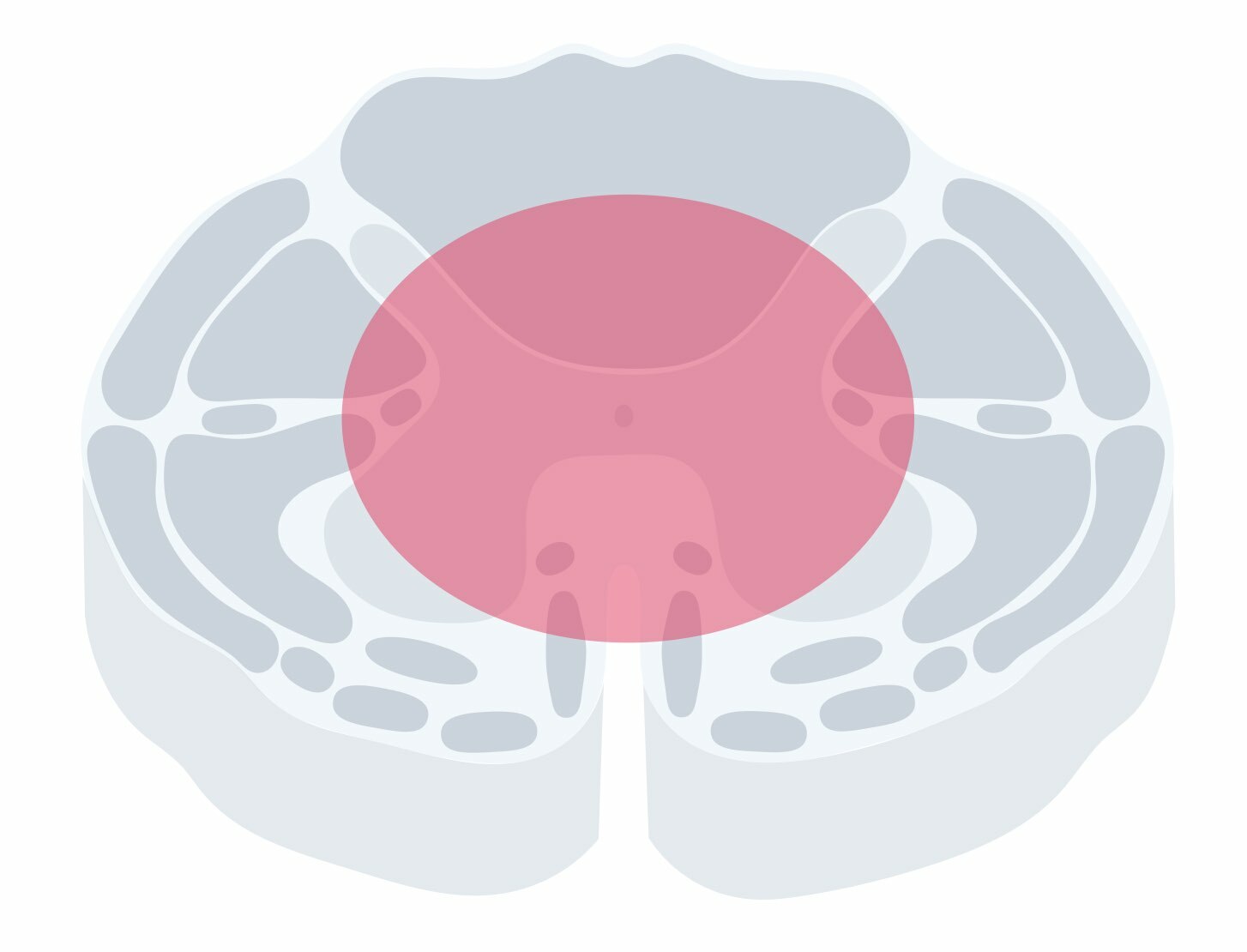 The syndrome is commonly due to pathologies within the cervical spine. It leads to a very classic set of clinical features.

The most common cause is a hyperextension injury of the neck due to trauma. Hyperextension of the neck usually follows a fall in the elderly with simultaneous compression of the anterior and posterior cord (often in the context of coexistent cervical spine disease). This was originally thought to cause central haemorrhage and adjacent white matter compression but may instead be due to disruption of white matter axons.

Other classic causes of this syndrome include:

We'd love to hear your feedback on our Spinal cord syndromes notes.