Typically, a slow-growing skin lesion (over months / years) which commonly occurs on sun-exposed areas of the body. Eighty percent occur on the head and neck.

BCC is the commonest form of skin cancer. It is 4-5x more common than squamous cell carcinoma (SCC). They generally affect middle-aged/elderly individuals, unless there is a genetic susceptibility. 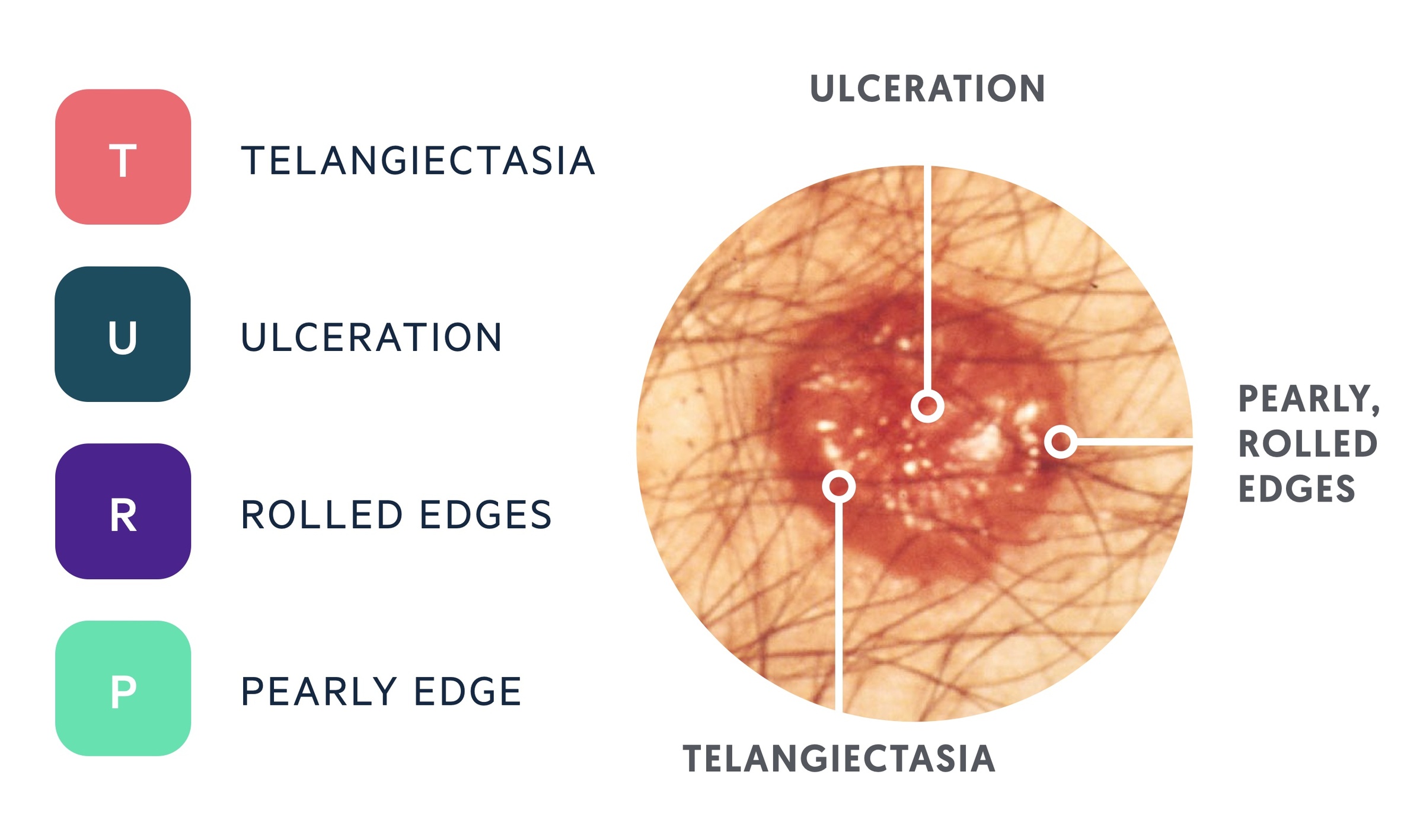 Exposure to UV light is the main aetiological factor.However, UV exposure is not the only risk factor, as roughly 1 in 5 BCCs arise on non–sun-exposed skin.

Other risk factors include:

A rare autosomal dominant condition that occurs as a result of gene mutation, specifically the PTCH1 gene. Individuals with Gorlin syndrome typically begin to develop BCCs during adolescence or early adulthood. 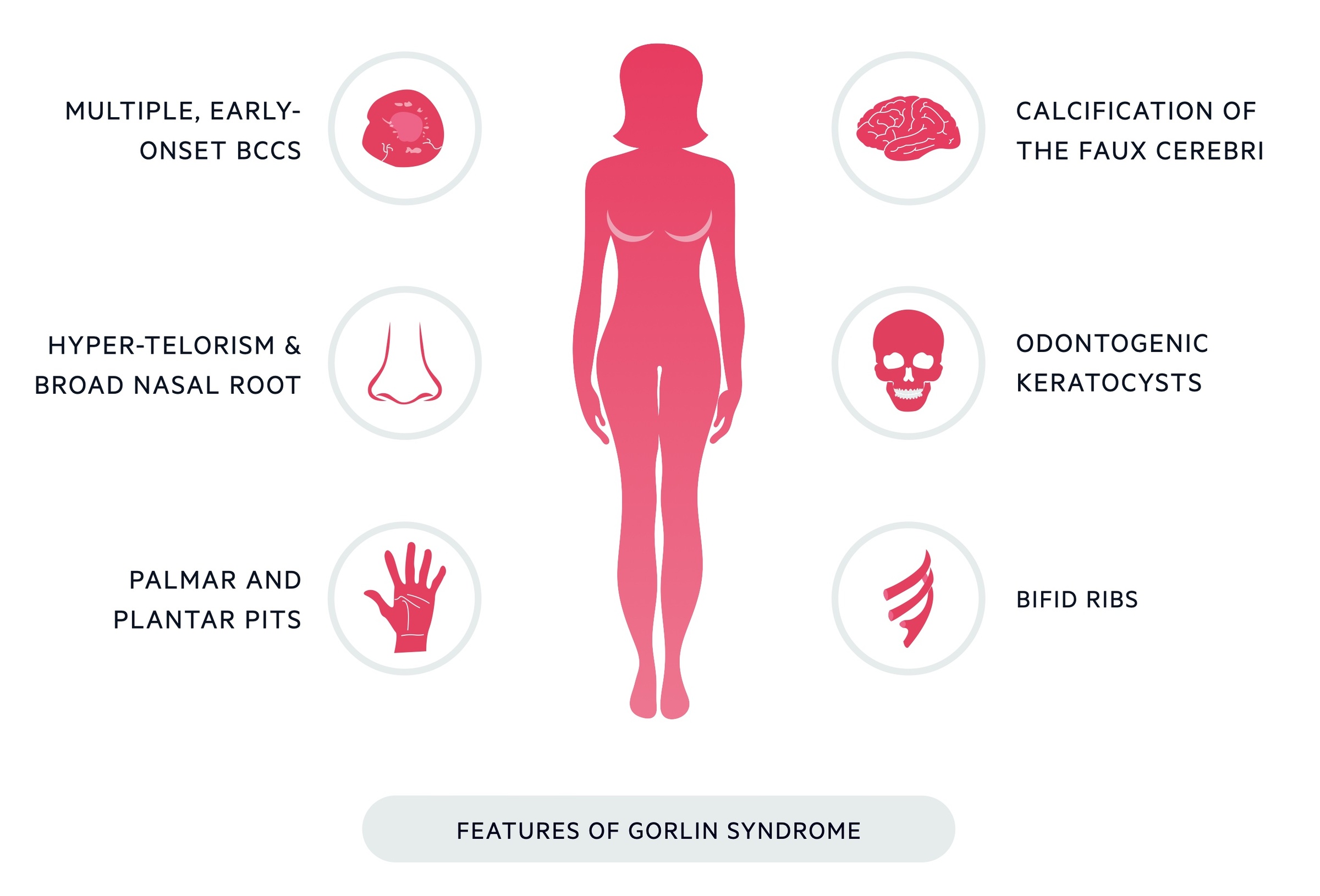 Other clinical features include:

Clinical features of a typical nodular BCC can be remembered with the mnemonic 'TURP'.

The presence of an irregular pink / skin-coloured lesion; commonly on the face or neck.

There are several clinical sub-types of BCC, including: nodular, superficial, morphoeic, pigmented & basosquamous.

There are multiple clinical sub-types of BCC described in literature, with some variation between sources. Below are listed five common variants. 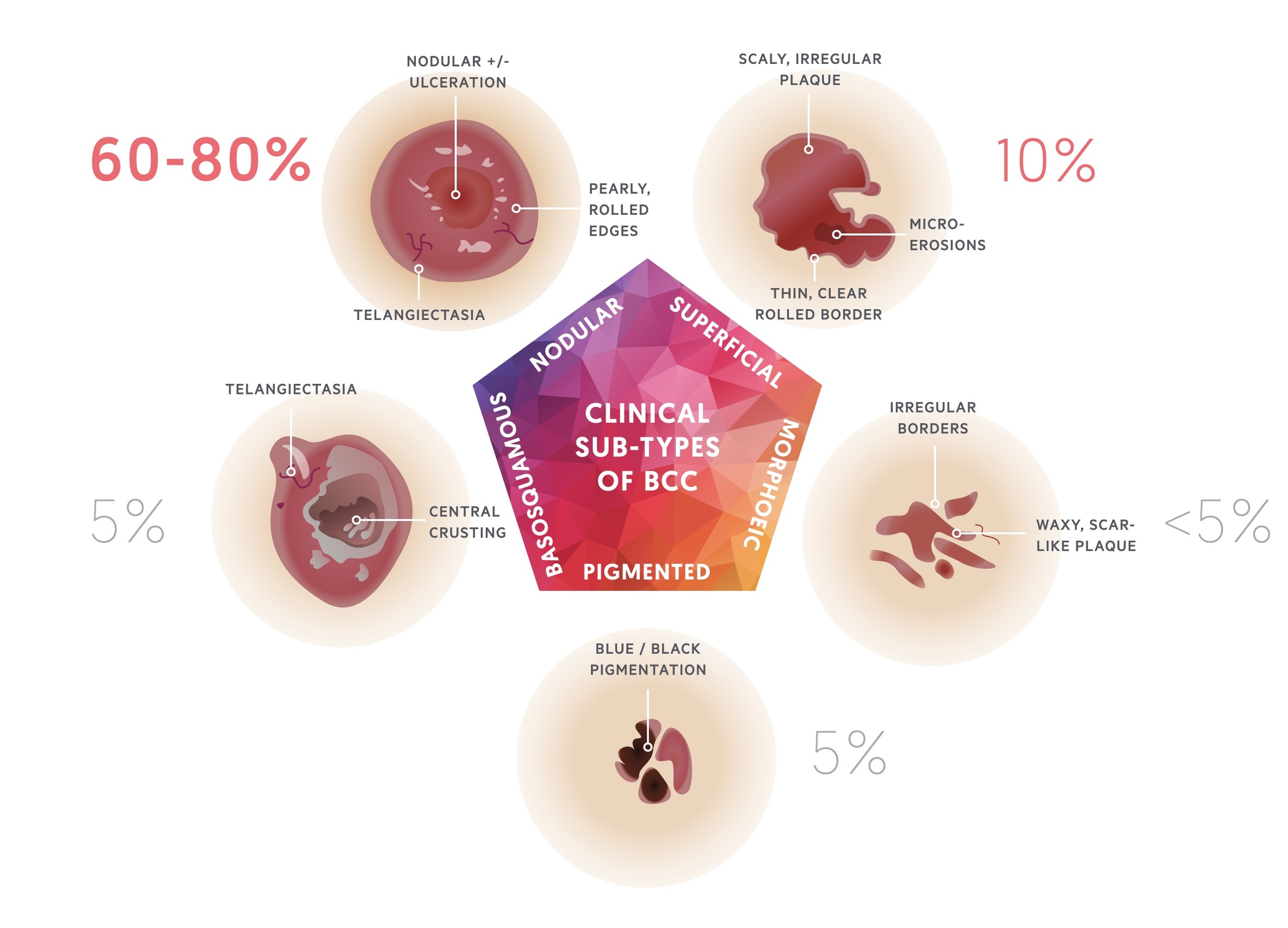 Nodular BCCs comprise about 60-80% of cases and occur most commonly on the head.

Nodular BCCs are red / flesh-coloured and have well-defined borders with overlying telangiectasias. As they grow, they may develop central ulceration (Rodent ulcer).

They commonly arise on the face, particularly on the forehead, temples, nose and upper lip. However, they rarely develop on mucosal surfaces. 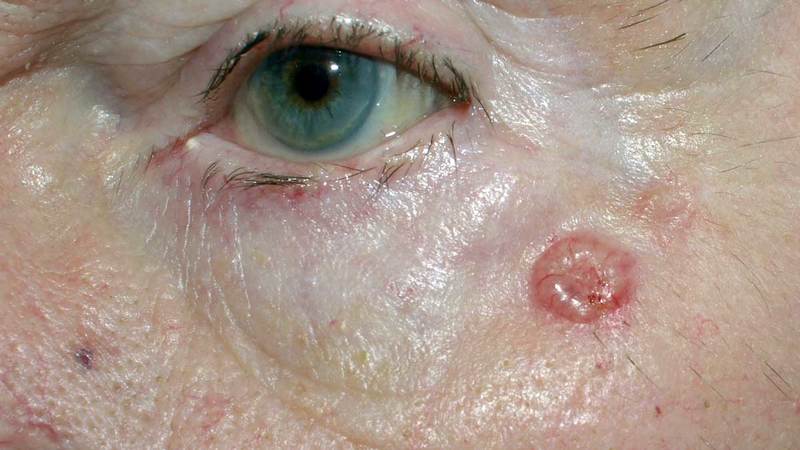 A nodular BCC on the face 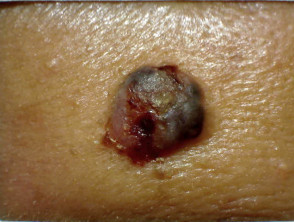 Superficial BCCs present as an erythematous plaque, most commonly on the trunk and limbs.

Superfical BCCs present as slow-growing erythematous plaques that may be dry or crusted or have a slight bluish tinge. They represent approximately 10-30% of BCCs and are often difficult to distinguish from dermatitis or SCC. Occasionally, nodular BCCs can emerge within these lesions. Areas of spontaneous regression areas often present as pale sections with fibrosis. Numerous superficial BCCs may be indictive of arsenic exposure. 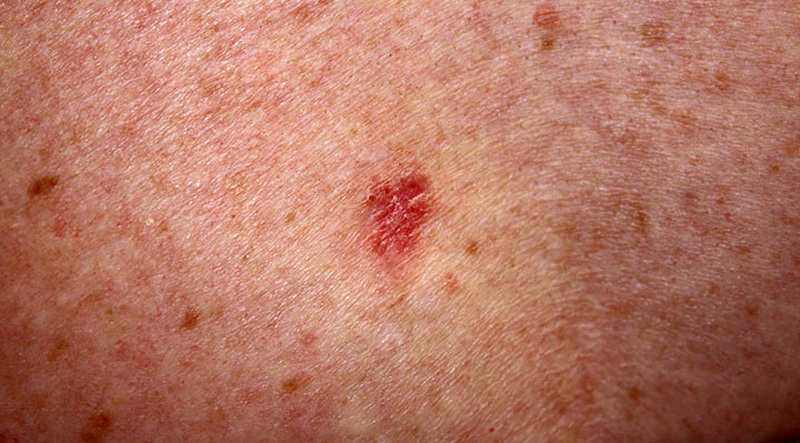 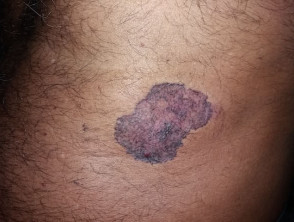 Morphoeic BCCs present as a scar-like lesion or indentation; they commonly occur on the upper trunk or face.

Morphoeic BCCs are typically difficult to distinguish. They present as a whitish, compact, poorly-defined plaque or scar. They are often deeply invasive. 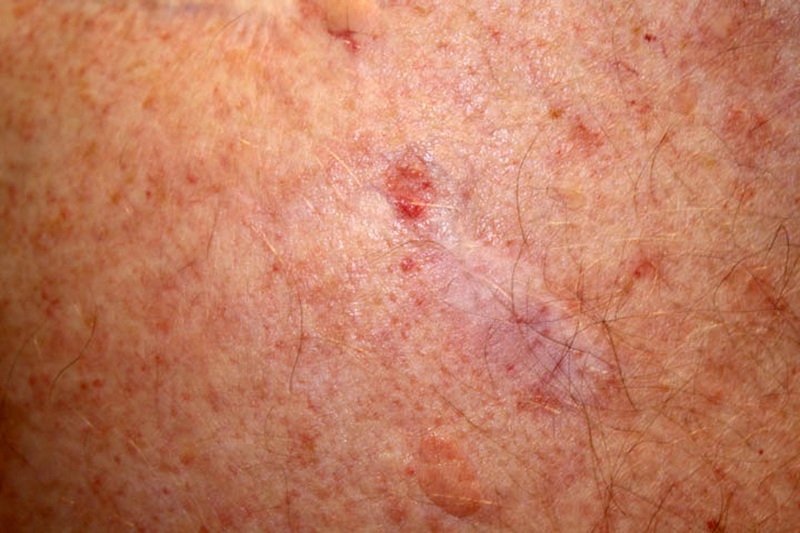 Pigmented BCCs may be difficult to distinguish from melanoma. 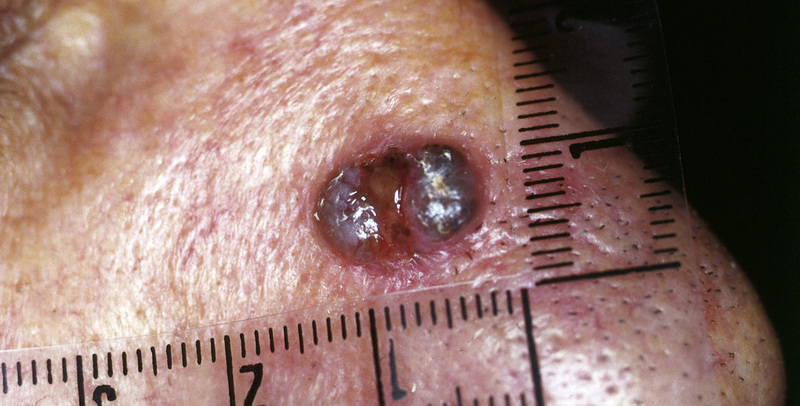 A rare, but aggressive form of BCC with increased risk of recurrance and even metastasis.

A contraversial sub-type. Essentially a BCC with differentiation towards SCC. Hence, why it possesses macro- and histopathological features of both. A potentially aggressive skin cancer with metastatic potential.

A basosquamous lesion on the face

Management may be surgical or non-surgical and based upon a clinical-suspicion (e.g. what the lesion looks like) or upon a biopsy result (tissue diagnosis). 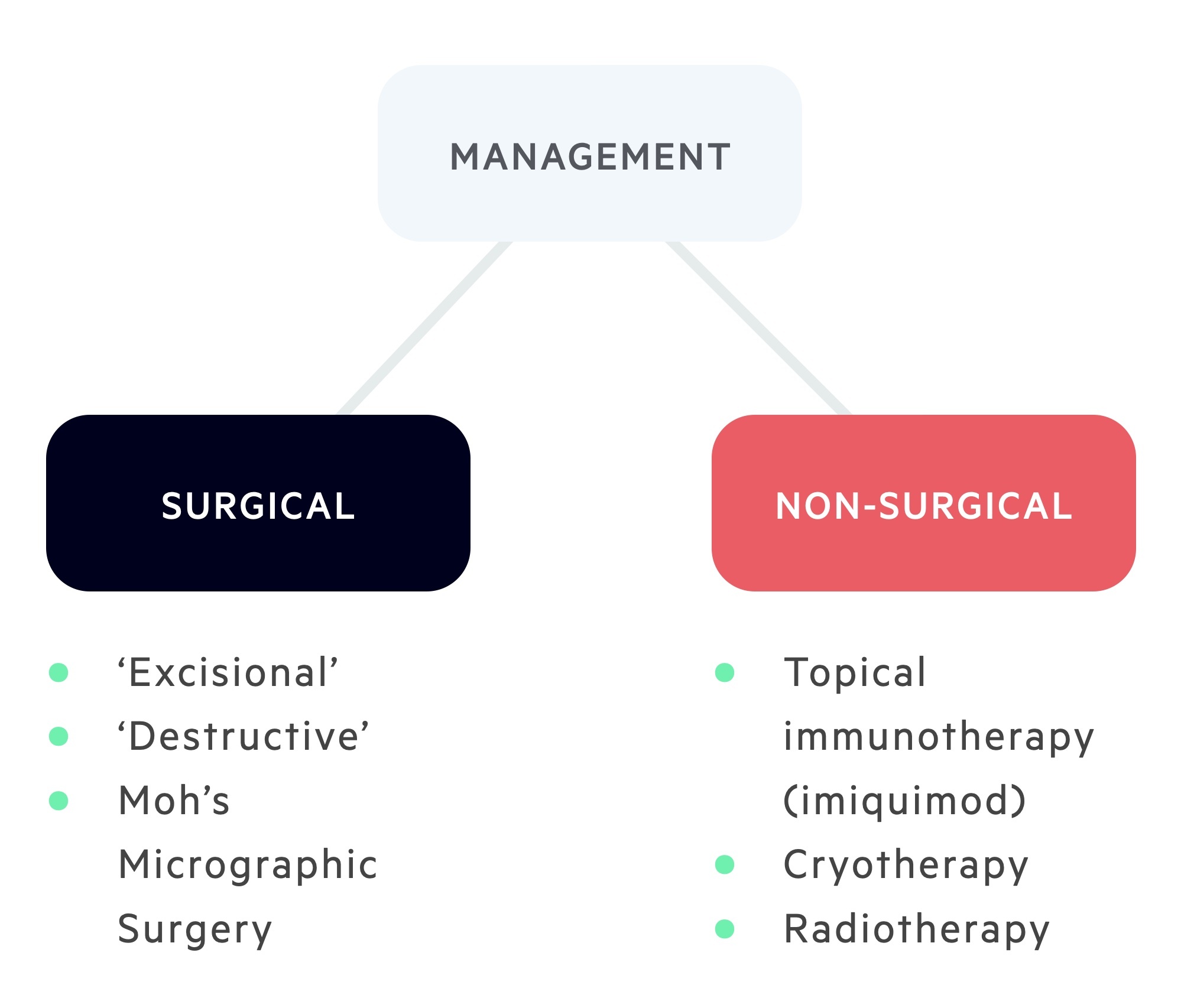 Surgical treatment may be 'Excisional' or 'Destructive':

A high-risk BCC is determined by ANY of the below:

Generally speaking, treatments that do not permit histological confirmation (tissue diagnosis) are only used for LOW RISK lesions.

Surgical excision margins are based upon the British Association of Dermatologists (BAD) guidelines for BCC.

Lesions should be excised down to subcutaneous fat to ensure that the entirely of skin (epidermis and dermis) has been included in the excision sample.

Take exam
Author Mr. Benjamin Smeeton Ben is a Plastic Surgery Registrar in Broomfield. He is a competent coder with a good eye for design. Outside of surgery he enjoys rowing.

We'd love to hear your feedback on our Basal cell carcinoma notes.