Prostate cancer is the most common malignancy affecting men in the UK.

Incidence increases with advancing age and men of Black ethnicity are more commonly affected. It can affect men, trans women, non-binary (assigned male sex at birth) and some intersex patients.

Management is dependent on a multitude of factors but may involve active surveillance, androgen deprivation therapies, radiotherapy, chemotherapy and surgical intervention.

1 in 6 men in the UK will be diagnosed with prostate cancer in their lifetime.

In the UK it is the most common malignancy in men with around 52,000 diagnosed with prostate cancer each year. Approximately 12,000 men die each year from prostate cancer.

The prevalence increases with advancing age with incidence peaking between the ages of 75-79. Black men are at greater risk of developing prostate cancer and have a higher mortality when compared to White men.

The aetiology of prostate cancer is poorly understood though a number of risk factors have been identified.

Our understanding of the exact aetiology and pathophysiology of prostate cancer is still limited.

As with all malignancies, prostate cancer occurs when aberrant cells develop, divide and are not responsive to normal cellular control mechanisms.

The majority of prostate cancers (95%) are adenocarcinomas. Other, much rarer, forms include transitional cell, squamous cell and neuroendocrine cancers. 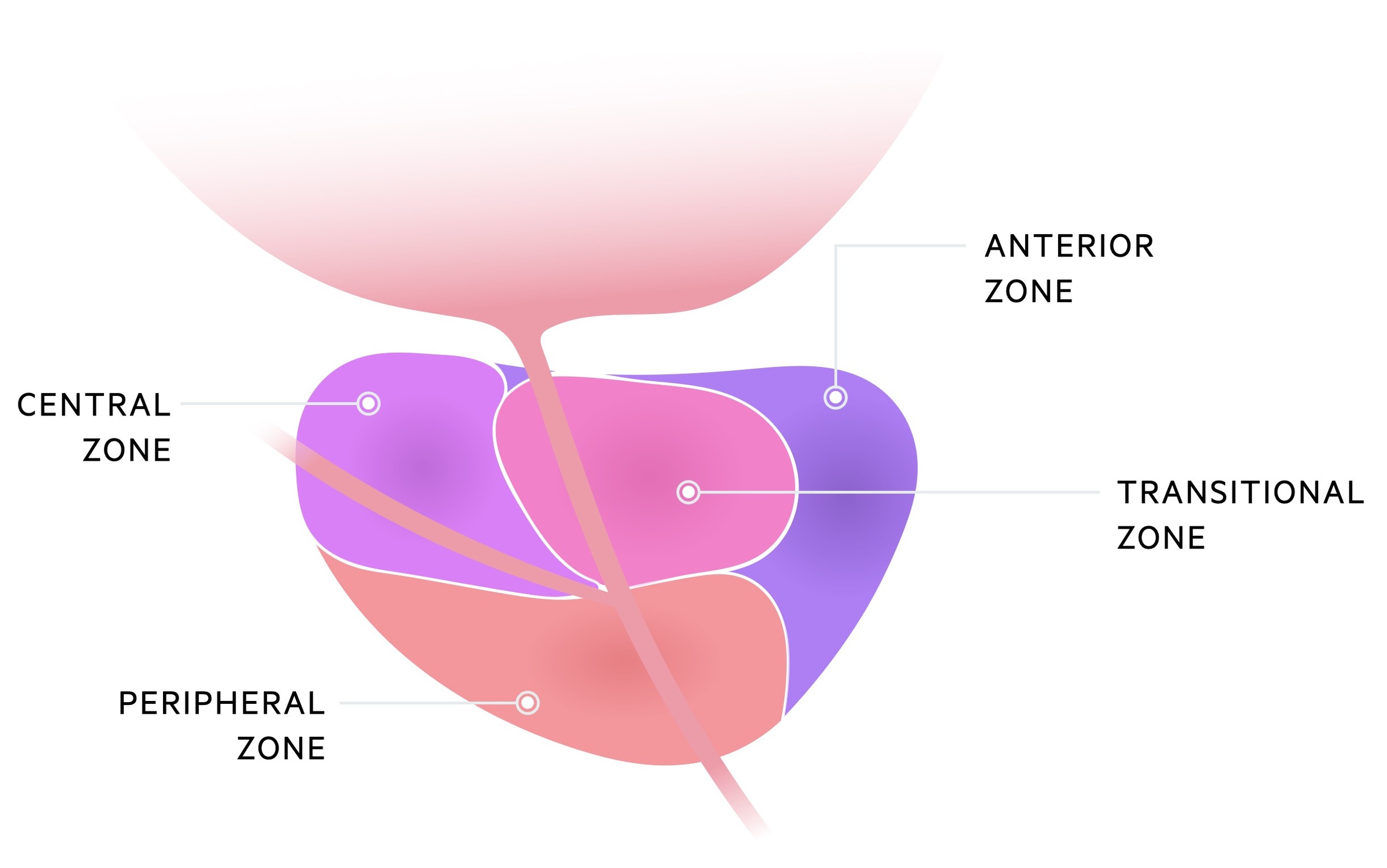 Prostate cancer is frequently asymptomatic, but as disease progresses a number of symptoms may be encountered.

Findings of cancer include enlargement, asymmetry, nodules and hardness of the prostate. It should be noted, many men with prostate cancer will have a normal DRE.

DRE should be considered in men with:

PSA is produced by normal prostate tissue, however levels in the blood tend to increase in malignancy. As part of normal physiology it is released into prostatic fluid to help liquefy sperm. It may be used both in the diagnosis and surveillance of prostate cancer.

Before testing men should not have:

The indications for PSA are complicated. There have been a number of studies that have tried to establish if a screening programme would be an overall benefit to the population. Currently there are a number of situations where PSA testing would be recommended. A full discussion regarding the PSA test (including the fact there are other causes of an elevated PSA, and a normal PSA does not exclude cancer) should be had with the patient.

PSA testing can be discussed with men over 50, and should be offered to those men over 50 who request it. An information leaflet is available (here) for patients. It makes clear there are both benefits and potential harms from having a PSA test when otherwise well.

Specific clinical triggers to consider a PSA test include:

All men with suspected prostate cancer should be referred on the urgent cancer (two week wait) pathway.

Clinician discretion must be used, a normal PSA and normal DRE do not exclude prostate cancer. If the diagnosis is suspected the patient should be discussed/referred for further review.

Multiparametric MRI is now commonly the first line investigation in the diagnosis of prostate cancer.

NICE also advise the use of the Likert score - a 5-point score based upon the radiologist's impression of the scan (adapted from Shin et al):

A guided biopsy is offered to patients with a Likert score of 3 or greater. NICE advise considering omitting biopsy in those with Likert score of 1 or 2 - after discussion of benefits and risks of each option and taking into account patient-based factors.

For the most part, the biopsy will be guided by the MRI images previously acquired with the help of USS.

A negative biopsy does not completely exclude a diagnosis of prostate cancer. Many factors, including Likert score, PSA level, DRE findings and medical history may be considered. Cases may be discussed at MDT, if concern remains high they may require repeat biopsy. Others may have ongoing active surveillance.

Those who do not have a biopsy with Likert score 1/2 and a raised PSA should have ongoing active surveillance with repeat PSAs and review.

Bone isotope scan, CT and further MRI may all be considered to evaluate for distant spread.

The tumour, node and metastasis (TNM) classification is used for prostate cancer. It assigns a score for each of the primary tumour, nodal spread (if any) and distant metastasis. The full staging is beyond the scope of this note but can be found on the NICE CKS page (here).

The Gleason score is a histological grade assigned to prostate cancers. From the biopsy, the most common and second most common tumour pattern is assigned a score of 1 to 5 (5 being the highest grade) to give a combined score of 2 to 10.

In men with localised prostate cancer, risk can be stratified as low, intermediate and high on the basis the PSA, Gleason score and clinical stage.

The full management of prostate cancer is well beyond the scope of this note. The goal of this section is to provide a general idea of the basic principles and options, using the NICE guidelines (NG 131) as a framework.

As a student there are a few key management options to be aware of:

Further management for situations like relapse are not covered here. If interested check out the further reading section.

Multiple modalities of treatment may be used for localised prostate cancer depending on patient wishes, their individual risk and patient factors. NICE advises three main options:

Each option has its own set of risks and benefits - and as such the patient's own individual circumstances and wishes are key. The evidence does not show a significant difference in deaths from prostate cancer between each option, however, there is good evidence that both ‘radical’ options reduce the chance of disease progression and development of distant disease.

On the other hand, active surveillance may be associated with a reduced incidence of complications such as urinary incontinence and erectile dysfunction.

Depending on the risk (see risk stratification in the 'Stage and grade' chapter) different options are advised:

Docetaxel chemotherapy may be used in patients with non-metastatic high-risk disease - the indications of which are complex and as always specialist-driven.

Patients are typically managed with prostatectomy and radiotherapy. Docetaxel chemotherapy may be used.

Pelvic radiotherapy can be considered in patients who are to have neoadjuvant hormonal therapy and radical radiotherapy and have risk of pelvic wall involvement (>15% risk).

As with all cases, care should be centered on the patient's wishes and needs. Input is required from urology, specialist nurses and palliative care.

Overall the prognosis is good, particularly when caught early.

The following figures are taken from Cancer Research UK. In the UK, overall:

In those aged 50-69, 95% of men survive for five or more years. Prognosis is however dependent on the staging at the time of diagnosis. Those diagnosed at stage 4 have a 49% survival at five years.

We'd love to hear your feedback on our Prostate cancer notes.