A varicocele refers to dilated veins within the pampiniform plexus.

The pampiniform plexus is a network of veins found in the spermatic cord that drains the testes and epididymis. Varicoceles occur most commonly in adolescent boys and may affect up to 15% of men. The vast majority (around 90%) occur on the left side.

Varicoceles occur due to dilation of the pampiniform plexus in the scrotum.

The pampiniform plexus is a network of veins found in the spermatic cord that drains the testes and epididymis. They drain proximally via the gonadal veins (also termed testicular veins in men).

Anything that leads to increased pressure within these veins may cause a varicocele. This may be caused by incompetent or absent valves. Rarely varicoceles can herald a compressive mass or vascular spread of a malignancy. This is classically described in renal cell carcinoma with spread into the left renal vein. 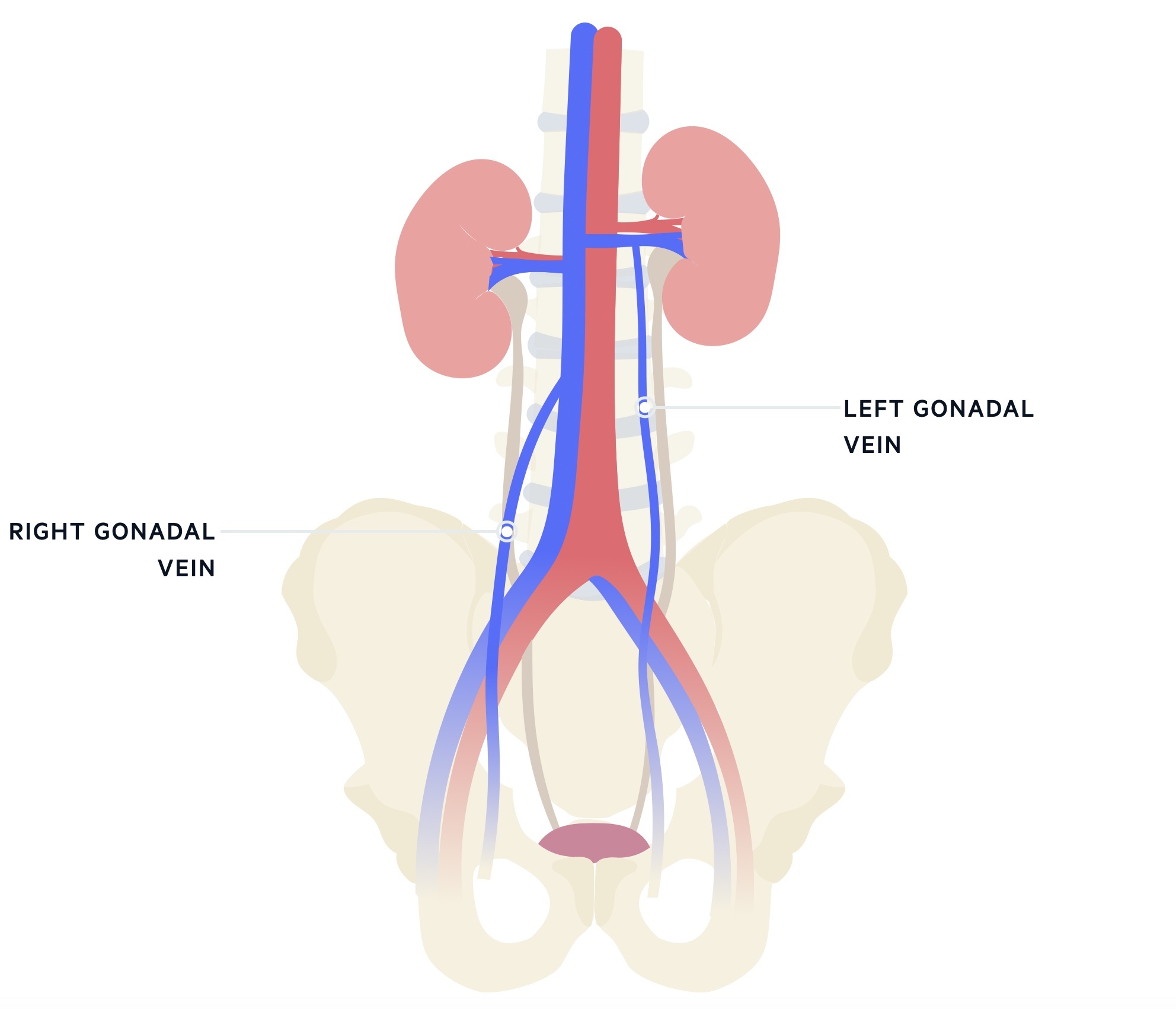 The majority occur on the left side (around 90%) due to the asymmetrical anatomy (though it should be noted variant anatomy is common). The left gonadal vein is longer and joins the left renal vein at a right angle and as such is more likely to have raised pressures. The right gonadal vein drains more obliquely, directly into the IVC.

Varicoceles may be a sign of renal cancer (or other intra-abdominal cancers/masses). The majority of varicoceles occur on the left side as the left gonadal vein tends to drain at a sharp angle into the left renal vein and is longer than the right draining into the IVC. The vast majority of varicoceles will not indicate cancer, however, tumours that compress venous return (classically left side, but right side may also be affected) can be a cause.

As such conduct a close examination, relevant investigations and consider referral, particularly in older patients with an unexplained new varicocele. Additionally NICE advise urgent referral in those with varicoceles that appear suddenly and are painful, do not drain when lying down or for a solitary right-sided varicocele.

Varicoceles are frequently asymptomatic apart from the palpable veins.

The most common symptom is painless scrotal swelling / palpable veins. This is classically described as a ‘bag of worms’. It may reduce on lying down and be exacerbated by a Valsalva manoeuvre.

Signs of testicular atrophy can sometimes be seen on the affected side. Some patients develop symptoms of discomfort, pain or a dragging sensation.

Varicoceles are normally a clinical diagnosis.

Testicular examination will normally demonstrate dilated veins - classically described as a bag of worms. The examination is conducted both standing and lying down and may involve dynamic manoeuvres (e.g Valsalva manoeuvre - forced expiration against a closed glottis). The size of each testicle should be evaluated.

Doppler USS may be used in cases of diagnostic uncertainty. Fertility assessments may be completed. Semen analysis can be sent alongside FSH and testosterone levels.

Varicoceles may be graded based on clinical findings.

Sub-clinical: no clinical abnormality, only detected by Doppler ultrasound.

Grade I (small): only clinically palpable with Valsalva manoeuvre.

The two key (related) complications of varicoceles are testicular atrophy and infertility. 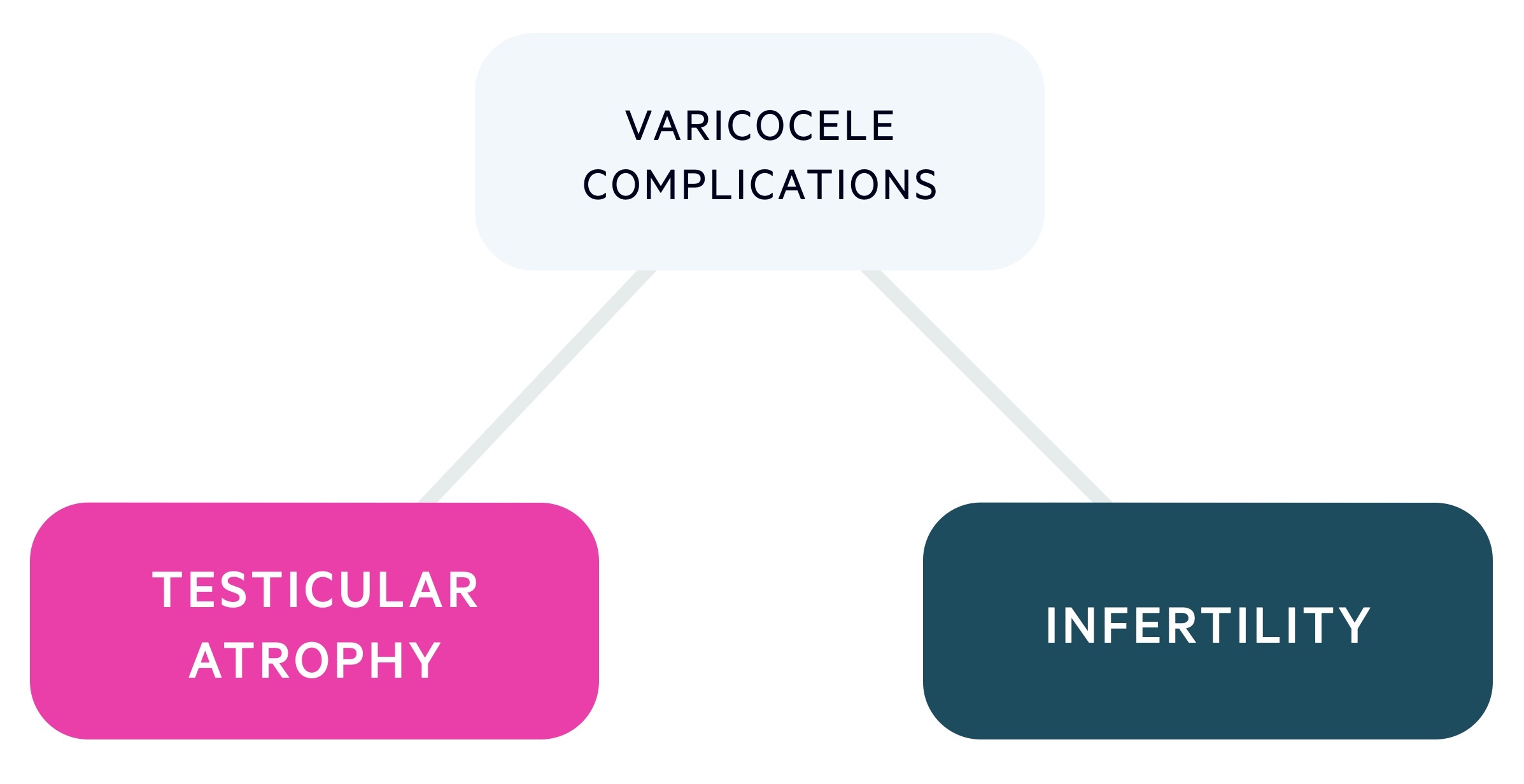 Varicoceles may lead to testicular damage and atrophy. Up to 25% of boys with Grade II/III varicoceles develop testicular growth arrest. This is a key indication for surgery - recovery of growth is seen in around 50-80% of cases. Patients with evidence of growth arrest should be referred to urology.

Varicoceles may effect efficacy and function of sperm. The exact pathophysiology is unclear but may involve impairment of the normal countercurrent mechanism leading to raised intra-scrotal temperatures. Vascular congestion within the testicle may also be responsible.

Surgical management to improve fertility is an area of controversy. Currently, NICE CG 156 advises against varicocele surgery for infertility as it does not appear to improve pregnancy rates. However, NICE CKS on varicoceles does recommend referral to urology in men with abnormal semen parameters and grade II/III varicocele for consideration of surgery.

NICE outlines a number of specific instances in which to refer patients.

Urgent referral is advised if:

Adolescents may be referred if:

If the scrotal swelling is of uncertain origin, the patient should be referred to urology. Men with infertility may also be referred, particularly if Grade II/III disease with abnormal semen parameters.

Currently, when needed, surgical/endovascular techniques are the only treatment options.

Grade I and subclinical disease rarely need treatment. Surgery tends to be considered in symptomatic disease and testicular growth arrest/atrophy. It may be considered in infertility but this is an area of controversy (see above).

When intervention is indicated surgery is the most common management. There are a multitude of approaches:

​​​​Recurrence rates vary but sit around 5-10%. Microsurgical techniques appear to have the advantage of very low recurrence and risk of arterial and lymphatic injury.

Less commonly endovascular techniques may be used. They generally avoid a general anaesthetic, though do expose the patient to radiation. Options include:

We'd love to hear your feedback on our Varicocele notes.