Shock is a broad and at times unhelpful term. It refers to any cause of circulatory failure that results in inadequate oxygen delivery to tissues. There are many causes with different underlying pathophysiological processes, normally they are divided into four categories:

It should be noted the term ‘shock’ is unliked by many in the medical field. The Royal College of Emergency Medicine describe it as a ‘somewhat lazy shorthand’ preferring clinicians take a more granular approach to their description of the patients clinical state that better reflects the causes and mechanisms. The term remains widely used.

The heart is responsible for maintaining adequate cardiac output through rate and stroke volume. With an average of 70 bpm and 70 ml per beat, cardiac output can be estimated at 5L / min.

Stroke volume is determined by a complex interplay of preload, myocardial contractility and afterload:

Circulation allows for the delivery of oxygen to tissues (and removal of waste products) with the ability to make adjustments depending fluctuating oxygen consumption.

Oxygen is carried in the blood in two ways:

Haemoglobin carries the vast majority of oxygen in the blood. It consists of four globin chains (normally two alpha and two beta chains) each with one haem group containing ferrous iron. Each haemoglobin can bind to four oxygen molecules.

An estimate of oxygen delivery to tissues can be obtained with the following equation:

The body has a number of compensatory techniques to deal with a fall in cardiac output or inadequate tissue perfusion. The compensatory mechanisms that are activated are in a large part down to the underlying cause of the shock, though many are common to most causes.

Some of the systems that may become activated include:

The clinical features of shock are determined by the underlying cause. In hypovolaemic shock patients will typically be tachycardic and peripherally ‘shut down’. This refers to cool peripheries and a prolonged capillary refill secondary to vasoconstriction. Both the increased heart rate and peripheral vasoconstriction are compensatory responses to reduced blood volume. Conversely in distributive shock peripheral vasodilation is the common aetiological factor. These patients may be warm peripherally though this may change, particularly in later stages. Tachycardia is again commonly seen.

Respiratory rate is a sensitive sign of systemic upset, tachypnea often occurs as a compensatory mechanism in patients with a metabolic acidosis secondary to inadequate tissue perfusion. Urine output is essential to monitor - oliguria is common - reduced urine output reflecting the compensatory and fluid preserving actions of aldosterone and vasopressin. Mental status should be recorded and monitored, as shock worsens confusion, reduced responsiveness and coma may result.

Decompensation occurs when normal compensatory mechanisms are overwhelmed and can no longer allow the body to maintain adequate blood pressure and tissue perfusion. This leads to a complex cascade of life-threatening failures.

Increasing anaerobic respiration results in greater acid production at a time when reduced renal perfusion and function prevents excretion of hydrogen ions. Acidosis has a negative impact on many of the bodies functions including normal cardiac function.

Hypovolaemic shock occurs secondary to a reduction in intravascular volume.

The causes of hypovolaemic shock can be divided into haemorrhagic and non-haemorrhagic. The features of such volume loss depend on the rate of loss, the patients co-morbidities and their ability to compensate. Reduced intravascular volume results in low blood pressure and poor tissue perfusion:

The severity of haemorrhagic shock can be classified based on a number of parameters. 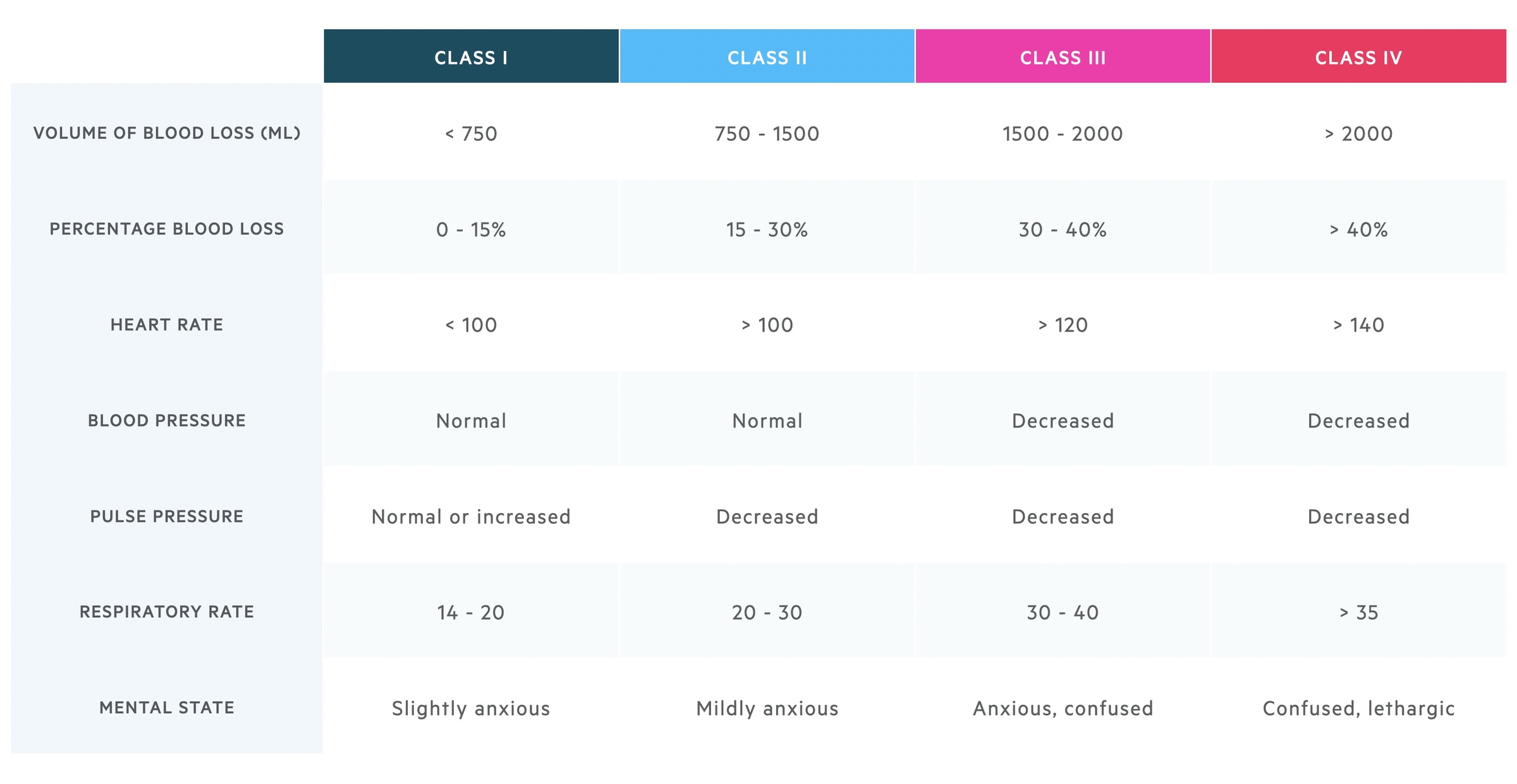 This table reveals a number of interesting pieces of information. Blood pressure is not a particularly sensitive sign of acute volume loss, whilst respiratory rate increases relatively early on. Remember these findings give a general outline but individual patients may deviate.

Distributive shock has many causes, some texts consider three distinct categories (vasodilatory, anaphylactic and neurogenic) in the place of distributive. Here we discuss three important examples.

There are a number of scoring systems that can be used to assess risk and prognosis, each has their own limitations. An example is qSOFA (quick Sepsis Related Failure Assessment) that aims to identify patients at increased risk of poor outcomes outside the ITU environment. It consists of three components:

Any patient with suspected sepsis should be managed with the SEPSIS-6 principles in mind. The sepsis six bundle is a protocol by which a patient may be investigated and treated for sepsis. It is by no means exhaustive but incorporates key investigation and treatment points. The bundle should be initiated and completed within one hour of recognition of the signs. All patients with significant infection should have a senior review. Further support may be required including vasopressors (e.g. noradrenaline) to maintain blood pressure, given in AE resus or ITU.

Patients should receive high flow oxygen to achieve appropriate target saturations. A target of 94-98% is appropriate for the majority of patients. Those at risk of carbon dioxide retention (COPD) should have a target of 88-92%. IV fluids should be started, often 500ml of crystalloid over 15 minutes with reference the patient's haemodynamic status and co-morbidities. Antibiotics are key and should be given without delay, NICE recommend empirical treatment with piperacillin/tazobactam (tazocin).

A minimum of two sets of blood cultures should be taken. Ideally, this should happen prior to administration of antibiotics though they should not be a cause for delay. A serum lactate should be obtained normally via a blood gas (arterial or venous) to help assess the patient's status. Urine output should be measured ideally with a catheter with a careful fluid balance recorded.

Brain and spinal cord injuries can cause failure of normal autonomic pathways. If caused by a spinal cord injury these tend to be above T6. A failure of sympathetic tone and unopposed vagal tone results in vasodilation, reduced venous return and a fall in cardiac output. Bradycardia may also play a role.

Describes a severe allergic reaction, caused by a type I hypersensitivity reaction mediated by IgE release. It results in hypotension, laryngeal oedema and bronchoconstriction.

For more see our Anaphylaxis notes.

Cardiogenic shock is caused by cardiac dysfunction that leads to inadequate cardiac output.

Cardiogenic shock can result from any cardiac cause of reduced output. Arrhythmias, valvular pathologies (e.g. acute aortic regurgitation) and myocardial infarction can all lead to cardiogenic shock.

There are a number of causes of obstructive shock which include:

We'd love to hear your feedback on our Shock notes.