Oxygen should be regarded as a drug that is prescribed for patients with hypoxaemia (low blood oxygen concentration).

Oxygen is the most commonly used drug in emergency situations. It can be a life-saving drug to prevent severe hypoxaemia that refers to a low arterial oxygen concentration. However, used inappropriately oxygen can have serious or fatal consequences.

The headline point is that oxygen should be used to treat hypoxaemia and maintain a patients’ saturations in the target range. This should be 94-98% or 88-92% in patients at risk of type 2 respiratory failure.

When prescribing and administering oxygen there are several things to consider:

In this note we discuss the principles of oxygen prescribing. For more detailed information, see the British Thoracic Society guideline on oxygen use in healthcare and emergency settings.

In clinical practice, the term ‘hypoxic’ is commonly used instead of ‘hypoxaemic’ to refer to a patient with low oxygen saturations as measured on pulse oximetry. Although the terms hypoxia and hypoxaemia are used interchangeably, they mean two different things:

Arterial oxygen concentration is measured in kPa. The normal partial pressure of oxygen in arterial blood is 10.6–13.3  kPa. Low arterial oxygenation is known as hypoxaemia and this is the most common cause of hypoxia. However, hypoxia may occur in the absence of hypoxaemia if the peripheral tissue cannot utilise oxygen or oxygen delivery is impaired (e.g. anaemia).

The five causes of tissue hypoxia include:

For more information, see our notes on Respiratory failure.

The sole indication for oxygen is hypoxaemia.

Patients with hypoxaemia require oxygen to prevent hypoxia. This is because hypoxia impairs cellular aerobic metabolism. When aerobic metabolism is impaired cells undergo anaerobic respiration, but this is a short-term inefficient system that cannot sustain life for prolonged periods of time. By-products of anaerobic respiration include substances such as lactic acid that can lead to metabolic acidosis and reduced cellular function.

Oxygen is prescribed for two main groups with hypoxaemia:

Hypoxaemia is a common presentation in critically ill patients. Often, patients may be so unwell that oxygen is administered at high flow rates while waiting for a reliable oximetry reading. Once obtained, oxygen can be titrated to the appropriate target saturations.

Oxygen should always be administered to achieve a normal or near-normal oxygen saturation based on the target saturation set for the patient (see below).

Patients with, or at risk of, type 2 respiratory failure should have a lower target saturation at 88-92%.

There are two major target saturations for patients being treated with oxygen:

The target saturations should be clearly documented or recorded in the patient records.

Type 2 respiratory failure (T2RF) is characterised by hypoxaemia (PaO2 < 8 kPa) and hypercapnia (PaCO2 > 6.5 kPa). It is also referred to as hypercapnic respiratory failure. It can be either acute or chronic depending on its speed of onset and presence of compensatory mechanisms.

Patients at risk of T2RF include:

In patients with, or at risk of, T2RF higher levels of oxygen can induce or worsen hypercapnia due to a combination of ventilation/perfusion mismatch and increased physiological deadspace. Therefore, we can get oxygen-induced hypercapnia.

In a patient without a known diagnosis that increases the risk of T2RF such as COPD, it may be difficult to determine whether they should have a lower target saturation at 88-92%.

Features that can suggest a patient is at risk of T2RF:

If in doubt, always ask a senior for advice on target saturations.

The amount of oxygen that is delivered to a patient to maintain their saturations depends on the device used.

Different devices can be used to deliver oxygen to a patient to maintain oxygen saturations within their target range. These devices vary on the mechanism of delivery, concentration of oxygen given, and whether the delivery of oxygen is fixed or variable.

In general, more than 4 litres is uncomfortable for patients and causes dryness of the nasal passages.

A reservoir bag is connected to the mask with a one-way flap valve.

May be required for flow rates > 4 L/min due to upper airway dryness and discomfort. A humidifier attachment can be added to some devices

When monitoring patients on oxygen ensure you look for signs of respiratory deterioration, particularly if you are required to titrate oxygen upwards. These may include:

Non-invasive and invasive ventilation are a form of respiratory support to aid ventilation.

Non-invasive ventilation (NIV) is a way of supporting ventilation without having to undergo invasive tracheal intubation. NIV is indicated if high inspired oxygen concentrations (>60%) are not sufficient to maintain adequate oxygenation in patients with respiratory failure.

There are several methods of delivering NIV:

In very severe cases, patients may require Extracorporeal membrane oxygenation (ECMO), which is essentially an artificial lung. This is a very specialised treatment that involves diverting a patients blood to an artificial oxygenator before being pumped back to the patients body. It is used when mechanical ventilation is not sufficient to maintain adequate oxygenation and there is deemed a reasonable chance of recovery.

The diagram below shows a summary of oxygen prescribing for acutely hypoxaemic patients in hospital. 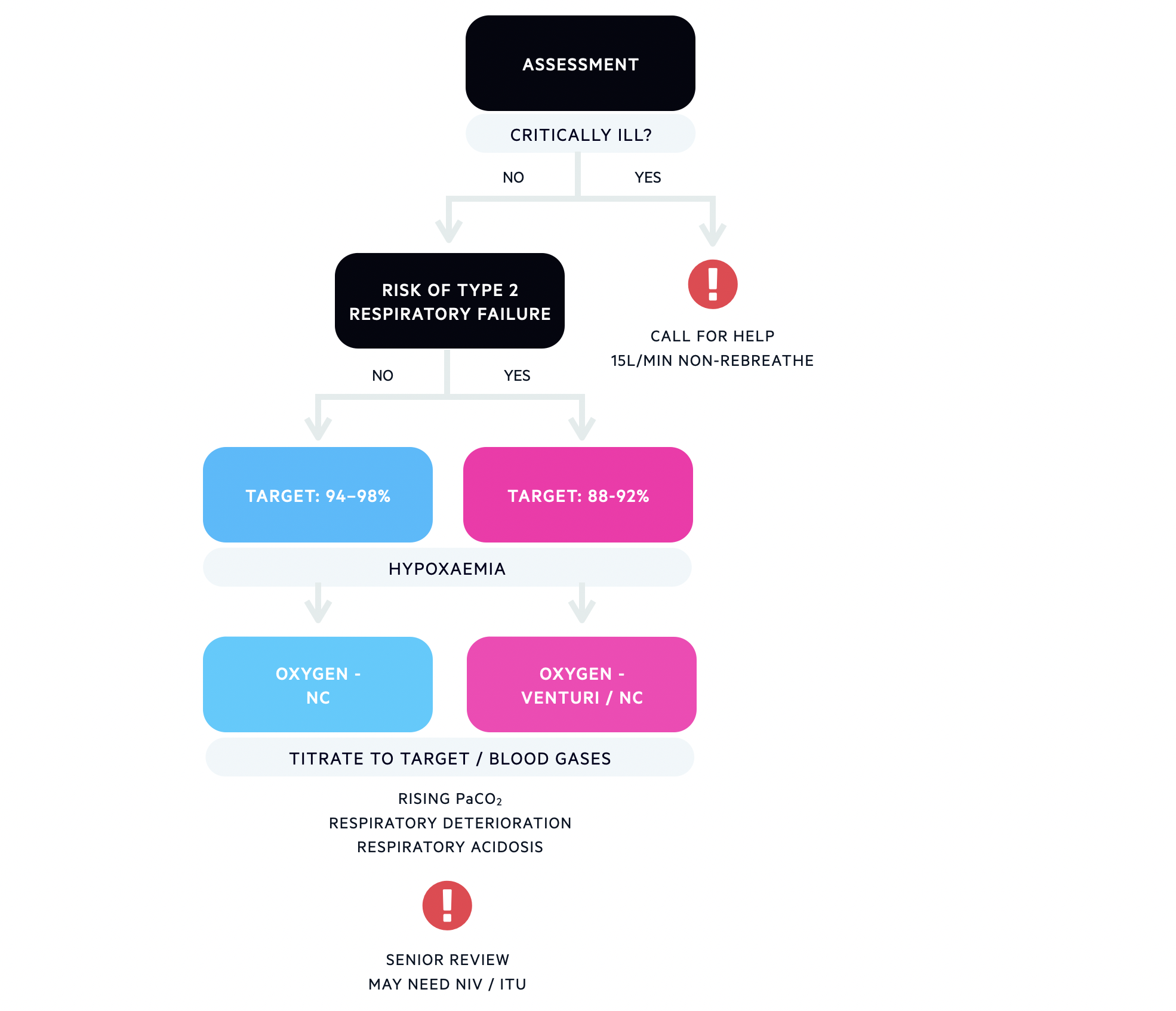 Approach to oxygen prescribing in an acutely hypoxaemic patient

We'd love to hear your feedback on our Oxygen notes.