Gastric (stomach) cancer is the 17th most common malignancy in adults in the UK.

The stomach is a muscular organ that is part of the gastrointestinal (GI) tract. It is located at the distal end of the oesophagus beyond the gastro-oesophageal junction (GOJ). The stomach is essential for digestion.

The stomach is divided into five anatomical components known at the cardia, fundus, body, antrum and pylorus. The pylorus marks the entry into the duodenum and the whole stomach is composed of columnar epithelium. For more information see our notes on gastrointestinal physiology.

Over 90% of gastric cancers are adenocarcinoma, which is historically divided into two histological subtypes known as intestinal and diffuse (based on Lauren criteria):

The truth is the classification of gastric cancer is more complex and has advanced over time, this is discussed in more detail below.

The incidence of gastric cancer is highly variable depending on the geographical location.

In the UK, the overall incidence of gastric cancer has been declining, although there has been an increase in adenocarcinomas affecting the gastric cardia, which lies just below the GOJ.

Gastric cancer may be classified based on anatomy, histology, disease extent or molecular markers.

These classifications broadly apply to gastric adenocarcinomas, which are the most prevalent gastric cancer seen in >90% of cases.

This is the universally accepted classification of gastric cancer, which is based on the tumour, node, metastasis (TNM) classification used for all cancers.

Gastric cancers can be staged according to the size of the tumour, number of nodes involved and presence of distant metastasis. In 2017, further clarification was made on how best to classify cancers affecting the GOJ.

If an upper GI cancer involves the GOJ, it may be classified and treated as an oesophageal or gastric cancer:

Traditionally, gastric cancer was classified based on the Lauren criteria (1965) into two histological subtypes:

These subtypes have very different clinical, pathological and molecular features. If diffuse gastric cancer involves a major portion, or all of the stomach, it may be referred to as linitis plastica or ‘leather bottle stomach’. 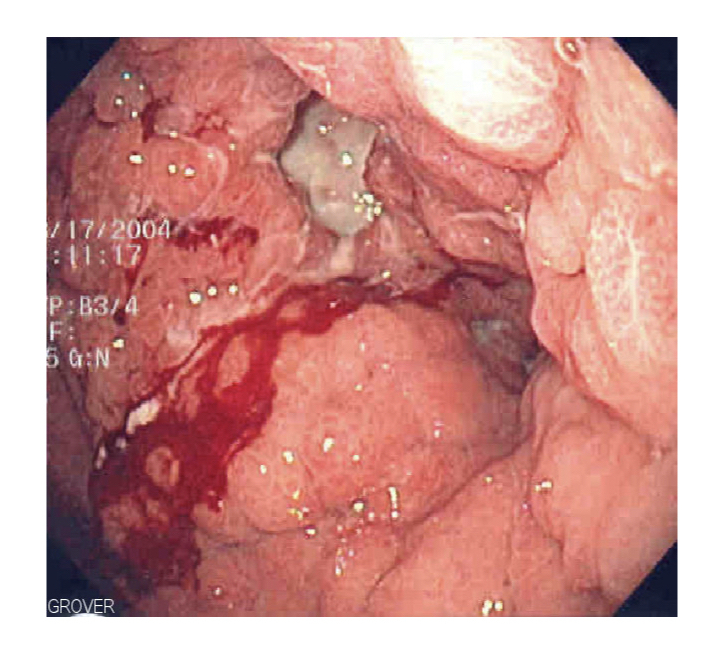 More recently, the World Health Organisation (WHO) classified gastric cancers based on defined histological subtypes, which include:

Classifying gastric cancers based on whether they are ‘early’ or ‘advanced’ refers to the extent of spread through the stomach wall, which includes the mucosa, submucosa, muscularis externa and serosa.

Gastric cancers are highly heterogeneous with numerous somatic mutations (i.e. occurring in the tumour) that differ significantly between individuals. TP53, also known as the 'guardian of the genome’ because of its crucial role in the cell cycle is the most commonly identified mutation.

The gram negative bacterium Helicobacter pylori has a significant role in the aetiology of gastric cancer.

Gastric cancer is a very heterogeneous condition, which is influenced by a variety of environmental, infectious, and patient-related factors (e.g. genetics).

Helicobacter pylori is a gram negative spiral bacterium, which colonises the stomach. It has been implicated in up to 89% of non-cardia gastric cancers.

H. pylori infection usually begins in childhood, although the precise mechanism for acquirement and transmission of the organism is not fully understood. It causes both acute and chronic inflammation that promotes abnormal cellular growth, genetic mutations, and dysplasia (discussed in pathophysiology).

One of the main proteins involved in its pathogenies is CagA, which is an oncogenic protein that can disrupt epithelial intercellular junctions, increase cell proliferation, reduce apoptosis, and promote formation of adenocarcinomas

Other infections linked to gastric cancer include Epstein-Barr virus (EBV).

In addition, some genetic mutations can be inherited in an autosomal dominant pattern leading to a very high risk of gastric cancer including hereditary diffuse gastric cancer (HDGC).

HDGC is a diffuse type of gastric cancer most commonly due to an inherited mutation in CDH1.

HDGC is inherited in an autosomal dominant pattern. The lifetime risk of gastric cancer is 70% in men and 56% in women. The median age at diagnosis is 38 years old.

The majority of cases are due to a pathogenic mutations in the CDH1 gene. This is needed for formation of cadherins, which are important in cell-to-cell interaction. Other genetic mutations have been linked to HDGC.

Patients with known HDGC are usually recommend prophylactic total gastrectomy due to the high risk of cancer. In addition, there is an increased risk of lobular breast cancer.

The development of any cancer is based on the acquirement of sequential mutations that allow a cell to proliferate uncontrollably. By itself, uncontrolled proliferation is not sufficient for cancer development. Malignant cells must develop mechanisms to support their growth, resist cell death and invade normal tissue. These adaptations occur over years and some cancers have very classic sequences of events.

The Correa cascade describes the classic sequence of histological lesions for the most common gastric cancer: intestinal type adenocarcinoma. It was first described in 1975, but later linked with infection by H. pylori following its identification as a cause of gastritis in 1983.

The sequence progresses from normal gastric mucosa to gastric dysplasia, which is high-risk of developing invasive carcinoma:

Patients with gastric cancer may be asymptomatic or present with non-specific symptoms.

These refer to the non-metastatic manifestations of malignancy.

GOO occurs when there is obstruction to emptying of the stomach at the pylorus. This may occur due to a fibrotic stricture of obstructing tumour.

Classic features include early satiety, abdominal fullness, nausea, vomiting, weight loss. On auscultation of the stomach there may be a succussion splash (sloshing sound heard on patient movement due to a full stomach).

Early recognition and diagnosis is essential to improve mortality.

The NICE (NG12) guideline outlines recommendations for the referral of suspected cancer cases including upper gastrointestinal cancers. Below details the recommended referral for suspected gastric cancer.

This means referring a patient for appropriate investigations (e.g. gastroscopy) for suspected gastric cancer within two weeks. It is usually combined with a clinic appointment and CT imaging.

This means referral for a non-urgent gastroscopy to assess for gastric pathology. Usually performed within 6 weeks.

NOTE: Upper and lower gastrointestinal (GI) investigations should also be considered to investigate for GI malignancy (inc. gastric cancer) in all postmenopausal female and male patients where IDA has been confirmed unless there is a history of significant overt non-GI blood loss. British Society of Gastroenterology guidelines 2011.

Gastric cancer may be suspected based on clinical features or incidental finding on imaging (i.e. thickening of the gastric mucosa). However, definitive diagnosis is made using upper GI endoscopy, known as gastroscopy. 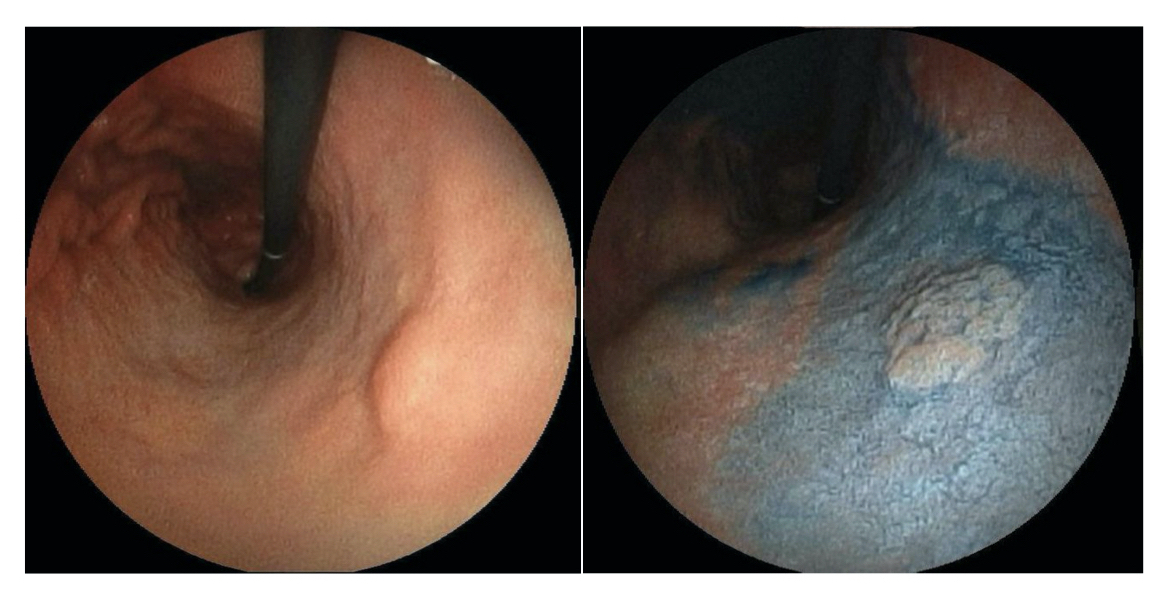 All patients with suspected gastric cancer should undergo gastroscopy to enable direct visualisation of the gastric mucosa followed by biopsies of suspected lesions. Biopsies are subsequently sent for histological analysis to see if any features of malignancy are present.

Human epidermal growth factor receptor 2 (HER2) testing should be completed on patients with metastatic gastric cancer as treatment directed against the HER2 receptor may be used in treatment regimens.

The stage of a cancer describes the extent of cancer spread.

The stage of a cancer is critical to determine treatments, but can be very complex and important mainly for clinicians involved in treating patients with cancer. Stage also provides prognostic information.

The management of gastric cancer depends on the extent of cancer and patients fitness.

There are numerous treatment options for the management of gastric cancer:

Surgical resection of gastric cancer is potentially curable. However, patients with locally advanced disease are high risk of recurrence so a combination of therapies is needed.

The treatment of choice for early disease is surgical or endoscopic resection.

Operative management is generally considered for patients who are surgical candidates without evidence of distant spread. Patients with early stage disease (T1N0) do not require combined management with chemotherapy. However, those with disease >T1N0 require a combination of treatment options (e.g. surgery and chemotherapy) due to the risk of recurrence. 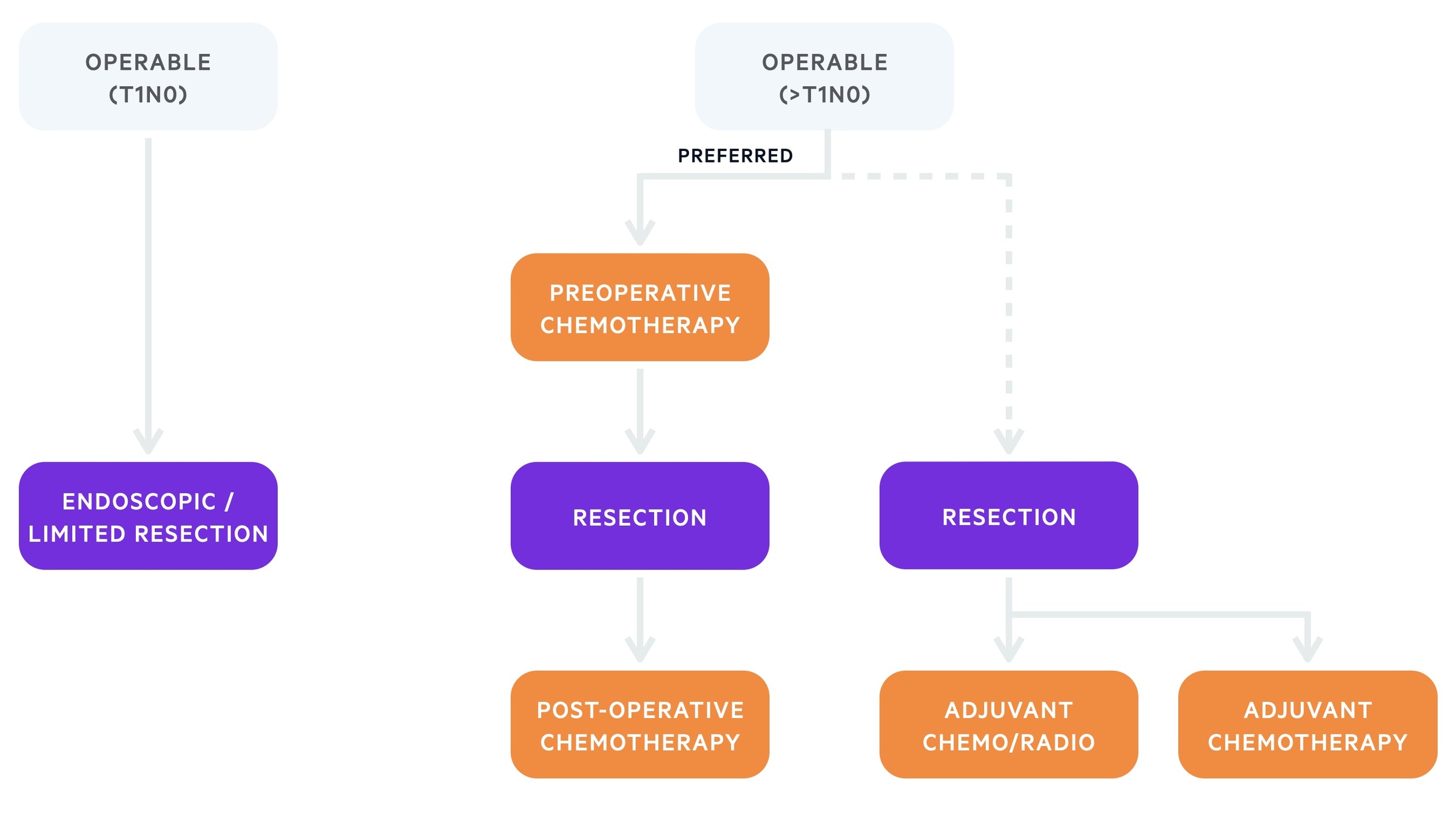 Surgical resection involves removal of the whole stomach or only a portion of the stomach. The remnant stomach or oesophagus is then joined to the jejunum. Options include:

Patients with small, early gastric cancers that are confined to the mucosa may be considered for endoscopic resection. There are two options:

The principle anti-cancer therapy in gastric cancer is chemotherapy. Pre-operative chemotherapy, which includes a combination of platinum/fluoropyrimidine should be offered to all patients with ≥stage IB resectable gastric cancer.

If patients undergo surgery before administration of chemotherapy, it should be offered post-operatively and may be combined with radiotherapy.

Patients with advanced non-operable or metastatic gastric cancer should be offered chemotherapy if fit enough.

The principle treatment for metastatic or non-operable gastric cancer is chemotherapy. This is usually platinum/fluoropyrimidine combinations. Those who are not fit enough to undergo systemic treatment should undergo best supportive care, which focuses on symptom control and quality of life. 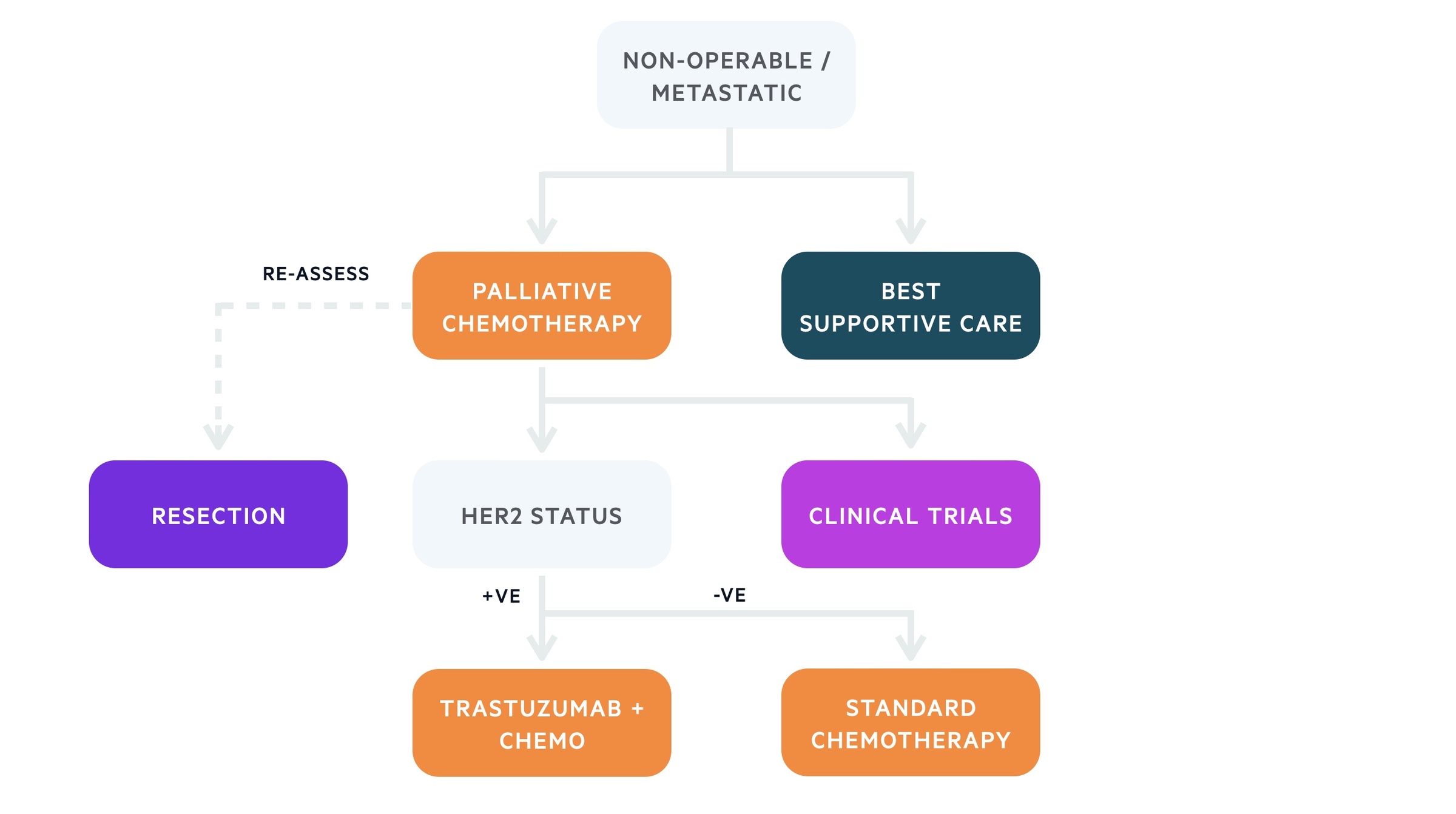 Chemotherapy forms the principle treatment in patients with metastatic or non-operable gastric cancer, which improves quality of life and survival. Chemotherapy combination regimens depend on whether the tumour is HER2 positive.

Newer agents and clinical trials may be available to patients. This depends on patient co-morbidities, performance status and patient choice.

This describes a patients' level of functioning in terms of their ability to care for themselves, what they can do as part of their daily activities and their physical ability.

The five year survival of gastric cancer is poor at ~20%.

Survival from gastric cancer depends on stage. The five year survival for early stage disease is almost 90% but only 24% in patients with stage 3 disease. The overall survival is poor because the disease is usually advanced at presentation and is more common in elderly patients who are likely to have multiple co-morbidities.

Nevertheless, survival from gastric cancer has significantly improved within the UK over the last 40 years.

We'd love to hear your feedback on our Gastric cancer notes.