In part II we will take a look at the stomach and its role in digestion. The stomach is a highly specialised organ whose epithelium secretes hydrochloric acid and digestive enzymes. Its capacity reaches around 1-1.5L in adults.

It receives food from the oesphagus and mixes it with gastric secretions, aiding digestion and forming chyme (acidic semi-liquid partially digested material). Chyme is then released into the duodenum under the regulation of a number of factors.

Little absorption occurs in the stomach (the vast majority occurs in the small intestines), however, certain compounds like alcohol and aspirin can be. 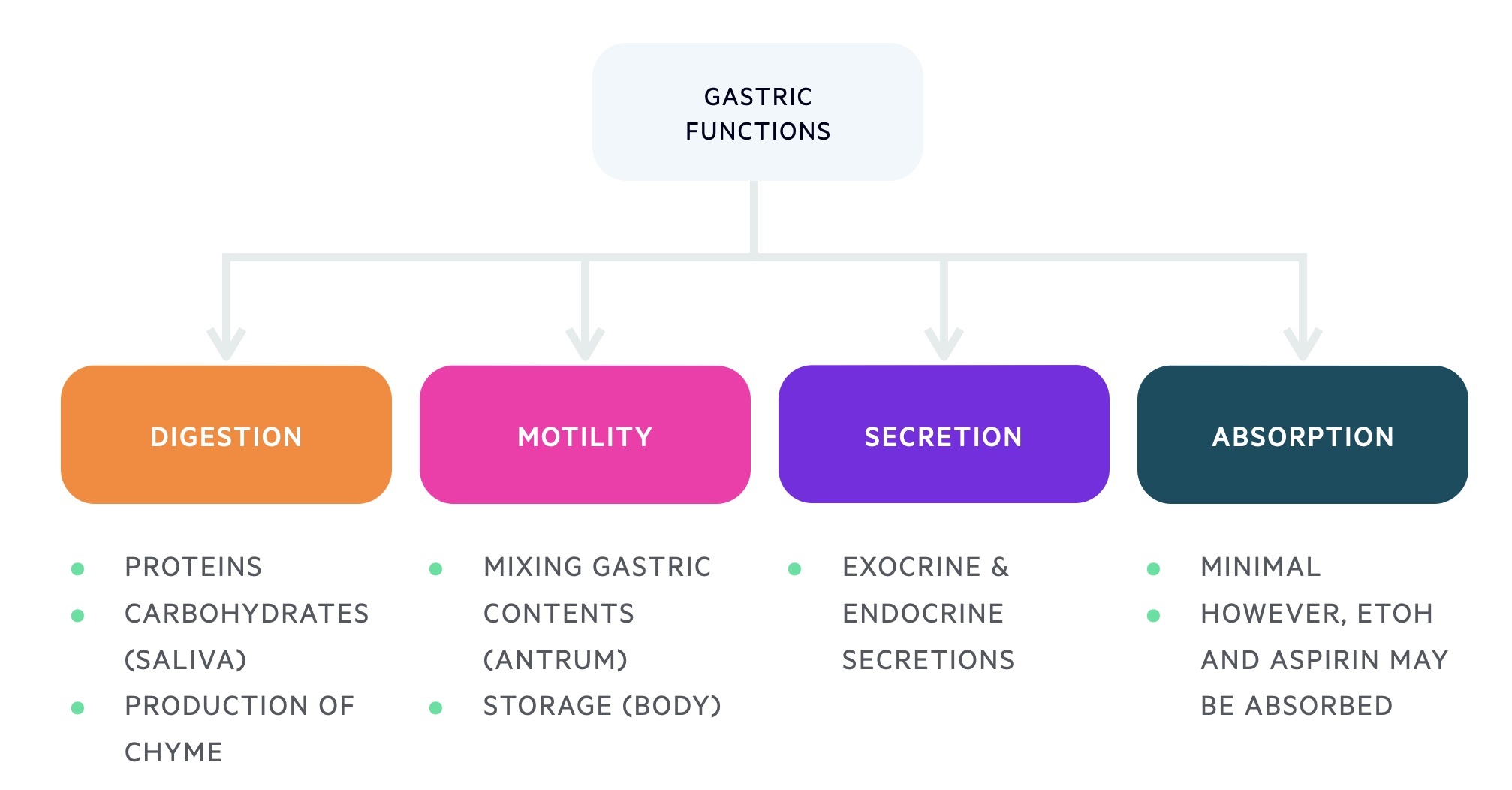 Anatomy of the stomach

The stomach begins at the distal end of the oesophagus beyond the gastroesophageal sphincter. It ends at the pylorus and pyloric sphincter which is in continuity with the first part of the duodenum.

The fundus is the uppermost part of the stomach. It connects to the cardia, which is the superior inlet to the stomach located inferior to the gastro-oesophageal sphincter. The body is the main portion of the stomach and is important in the storage of ingested food.

The muscular antrum comprises the lower section of the stomach, which is vital for mixing gastric contents. The pylorus forms the distal aspect of the stomach, it ends at the pyloric sphincter. This is important for the control of gastric emptying. 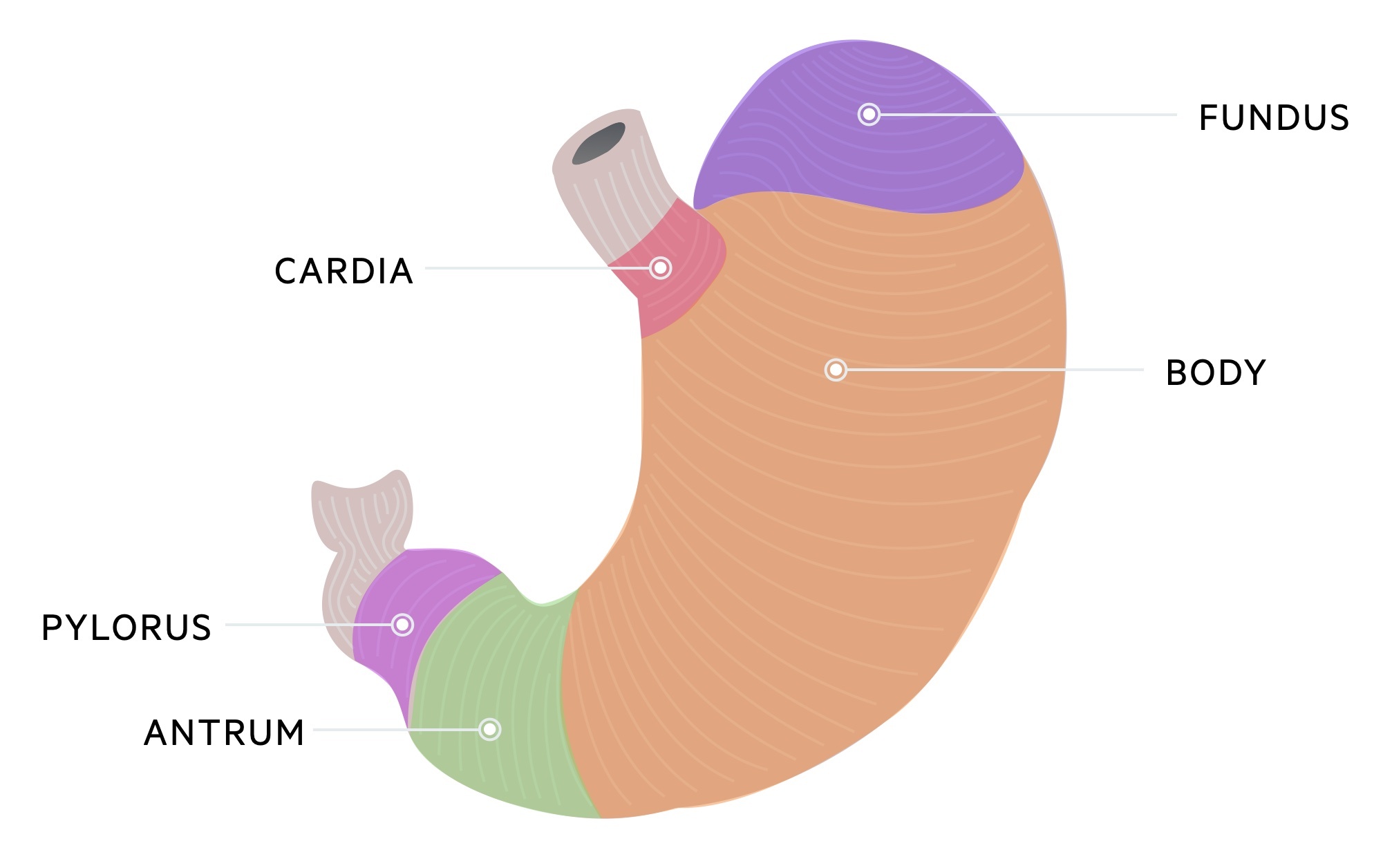 The mucosa of the stomach is important for the secretion of enzymes and digestive juices.

It is composed of simple columnar epithelium lined by an alkaline mucous layer that protects the cells from the acidic stomach contents. This mucosa contains numerous deep pockets due to infolding, termed gastric pits which themselves contain glands.

Gastric glands are all tubular but have differences in both structure and cell composition and are found in different parts of the stomach. There are three major types of gastric glands:

Cardiac glands contain mucous cells. These produce an alkaline mucous that protects the epithelium of the stomach and acts as a lubricant.

The oxyntic glands are found in the body and fundus of the stomach. It primarily contains important exocrine cells including; mucous cells, chief cells and parietal cells:

The pyloric glands are found in the antrum and pylorus. Mucous cells are the predominant cell type, they produce an alkaline mucous that protects the epithelium of the stomach and acts as a lubricant.

Parietal and chief cells may be sparsely present (parietal cells are seen in the foetal and postnatal period).

Gastric secretions are coordinated by a series of neurohormonal mechanisms.

Ultimately, there are many overlapping pathways that occur during the gastric phase of digestion, this culminates in increased secretion of two key products: pepsinogen and hydrochloric acid.

Hydrochloric acid (HCl), a strong acid, has numerous important functions within the stomach. It helps denature proteins and its low pH is key to the innate immune defence. It is also critical for the activation of the proenzyme pepsinogen into the active enzyme pepsin.

Pepsin is important in the breakdown of polypeptide chains into small peptide fragments. Pepsin is able to autocatalyse itself, this mean pepsin can activate pepsinogen. This leads to a significant increase in the availability of the active enzyme. 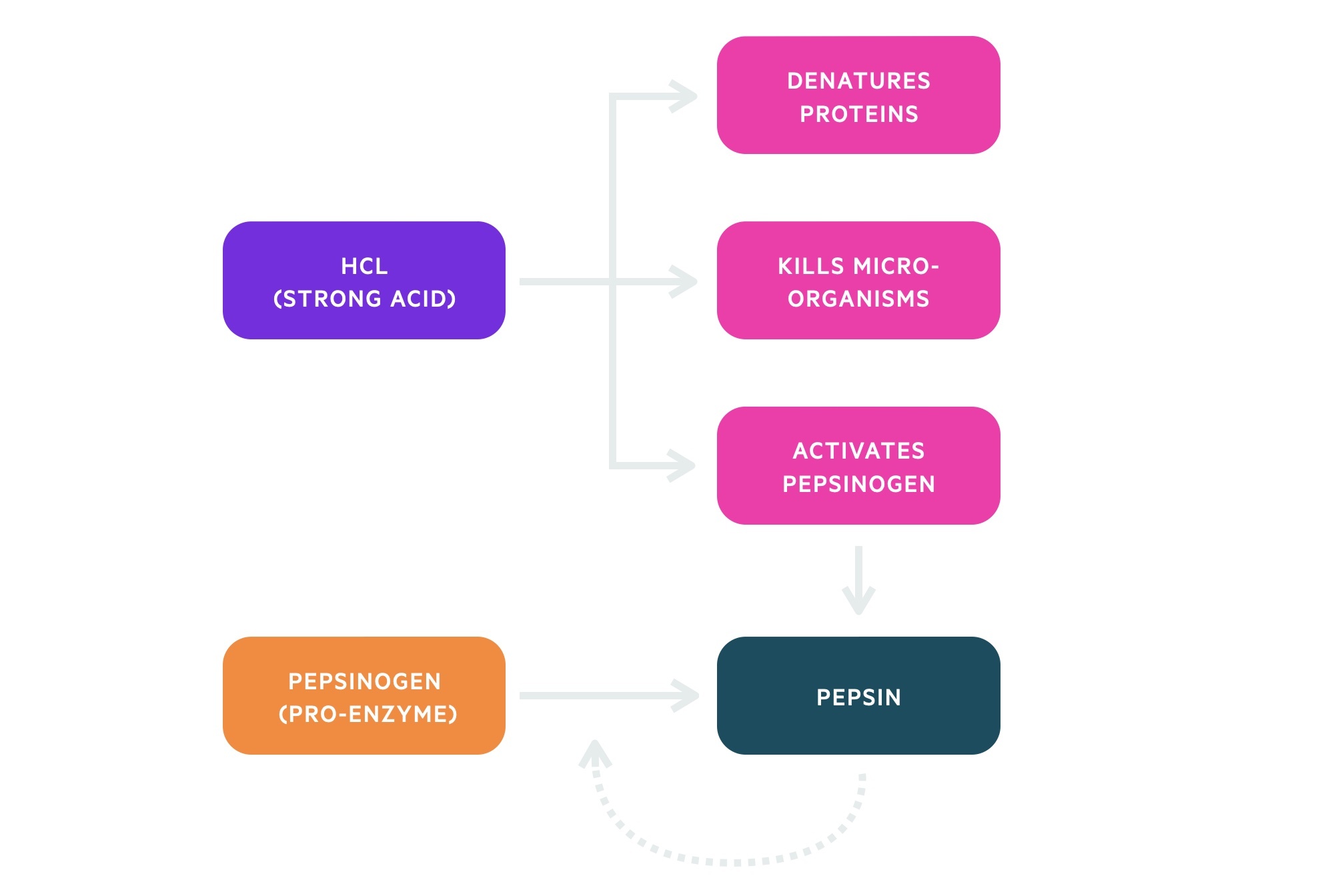 The intestinal stage of digestion is the final phase, which is chiefly inhibitory of gastric secretions. Gastric emptying of chyme into the duodenum stimulates the release of hormones from endocrine cells and activates local neurones. 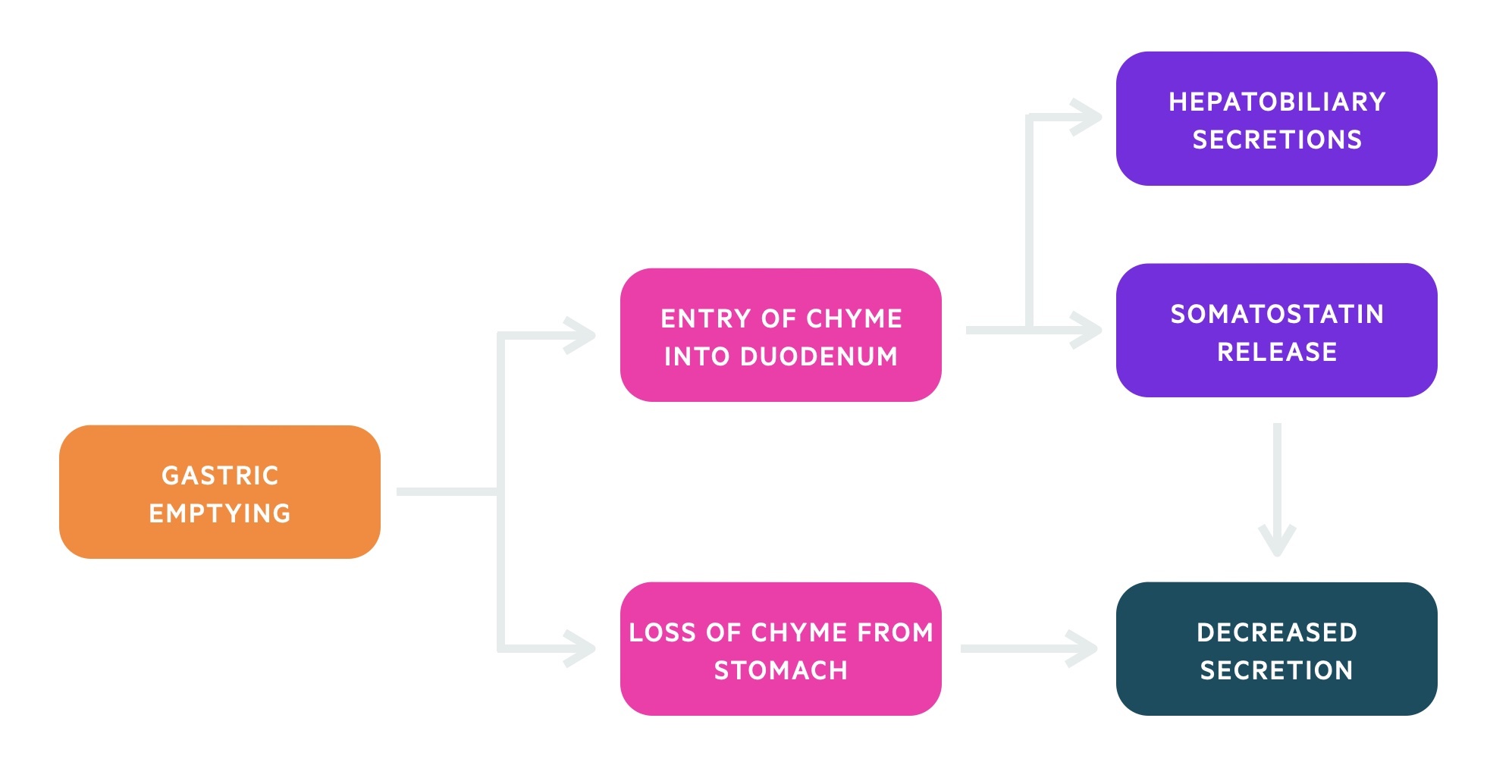 Gastric emptying is the process of moving acidic gastric chyme into the duodenum.

NOTE: enterogastrone refers to any hormone that inhibits the forward movement of chyme.

We'd love to hear your feedback on our 2/4 - Digestion notes.