The small intestine is the main site of absorption within the gastrointestinal tract. It is approximately 3-6m in length, extending from the pylorus of the stomach to the ileocaecal valve, and is divided into the:

Digestive contents are propelled towards the large intestines by peristalsis. The small intestine is well adapted for absorption due to the large surface area and specialised enterocytes.

The small intestines are highly folded increasing the surface area available for absorption.

The total surface area of the mucosa of the small intestines is disputed. It has often been quoted as 300m2 or the size of a tennis lawn. However, more recent reviews have revised this estimate to closer to 30m2.

The inner surface of the intestines contains numerous circular folds visible at endoscopy, which are the valvulae conniventes. These folds increase the surface area by around 1.6 times. They can be seen as a line running across the lumen on an abdominal X-ray. This is one of the distinguishing features between small and large bowel (large bowel have haustra, seen as incomplete lines from the edges of the large bowel wall on X-ray).

Lining the intestinal mucosa are microscopic finger-like projections called villi. Villi have a lining of enterocytes joined laterally by tight junctions. The luminal border of these enterocytes has numerous transport mechanisms and digestive enzymes to aid in the absorption process.

Each villus is formed by a core of connective tissue from the lamina propria and further supplied by vascular and lymphatic tissue. Each villus contains a vascular network including an arteriole, capillary bed and venule. Together these help in the absorption of nutrients, which can be passed towards the liver via the portal system.

A central lymphatic duct can also be found within each villus. This terminal duct, called a lacteal, is important in the absorption and distribution of fats.

Microvilli are minute hair-like structures that are found on the surface of enterocytes lining the villi, a microscopic extension of the plasma membrane. Each epithelial cell may contain up to 3000-6000 microvilli, which helps form the intestinal brush-border.

Together villi and microvilli increase the mucosal surface of the small intestines by 60-120 times.

The crypts of Lieberkühn are tubular pits that open onto the epithelium of the small intestines.

The crypts of Lieberkühn (also termed intestinal glands) are situated between the villi within the intestinal mucosa. The crypts contain numerous cells lines:

Stem cells are important in the regeneration of the epithelial lining of the intestines. They differentiate into enterocytes and goblet cells as they migrate towards the top of the villus over 3-6 days before undergoing apoptosis.

Paneth cells have important functions in host defence and the secretion of antimicrobial peptides. Endocrine cells are critical for neurohormonal control of the digestive tract and goblet cells secrete mucus.

The four main functions of the small intestines are secretion, digestion, absorption and motility.

Digestion refers to the large, complex food molecules into smaller, typically water-soluble, components that can be absorbed. It may be mechanical (e.g chewing, peristalsis) or chemical (mediated by enzymes)

The small intestines are important for the digestion of lipids, carbohydrates and proteins. Enterocytes contain a number of key enzymes on their luminal surface, which helps break large molecules into smaller fragments or single units that can be absorbed.

Absorption is the primary function of the small intestines. It describes the transfer of nutrients from our diet into the circulation. We have specialised mechanisms for the absorption of many substances including carbohydrates, proteins, lipids, iron and calcium. These processes are all described in further detail below.

The motility of the small intestines is divided into two important mechanisms:

Most nutrients consumed within the diet are absorbed unopposed by the intestines.

Most absorption takes place within the duodenum and jejunum. Up to 50% of the small intestines can be removed with little effect on overall absorption. Only calcium and iron absorption is regulated depending on our bodies' requirements.

Active transport requires the generation of an electrochemical gradient. Typically, a sodium/potassium pump on the basolateral membrane moves sodium out of the cell and potassium into the cell with the utilisation of ATP. This establishes an electrochemical gradient for the movement of sodium into the cell across the luminal membrane. Sodium then co-transports molecules (e.g. glucose/amino acids) across the luminal membrane.

Once inside the cells, sodium is actively pumped out by the basolateral sodium/potassium pump, and products of digestion can be absorbed via facilitated diffusion.

Proteins can be absorbed from the diet as amino acids or small peptide fragments.

Sodium/potassium ATPase pumps on the basolateral membrane generate an electrochemical gradient. This allows the movement of sodium down its concentration gradient via a symporter on the luminal membrane.

The symporter is coupled with the movement of amino acid molecules thereby facilitating absorption. This process is secondary active transport. Once inside the cell, amino acids can be absorbed into the portal circulation by a variety of different passive carriers on the basolateral membrane.

Sodium/potassium ATPase pumps on the basolateral membrane generate an electrochemical gradient. Sodium then moves into the enterocyte by an antiporter, which shuttles hydrogen ions out of the cell on the luminal membrane.

The movement of hydrogen ions out of the cell generates a second electrochemical gradient. Hydrogen then moves into the cell via a symporter on the luminal membrane. This symporter is coupled with the movement of peptide fragments. This process is tertiary active transport.

Once inside the enterocyte, these peptide fragments are broken into amino acids by intracellular peptidases before absorption into the portal circulation.

The absorption of carbohydrates is dependent on the type of monosaccharide.

Glucose/galactose are then passively absorbed by facilitated diffusion across the GLUT-2 transporter on the basolateral membrane. 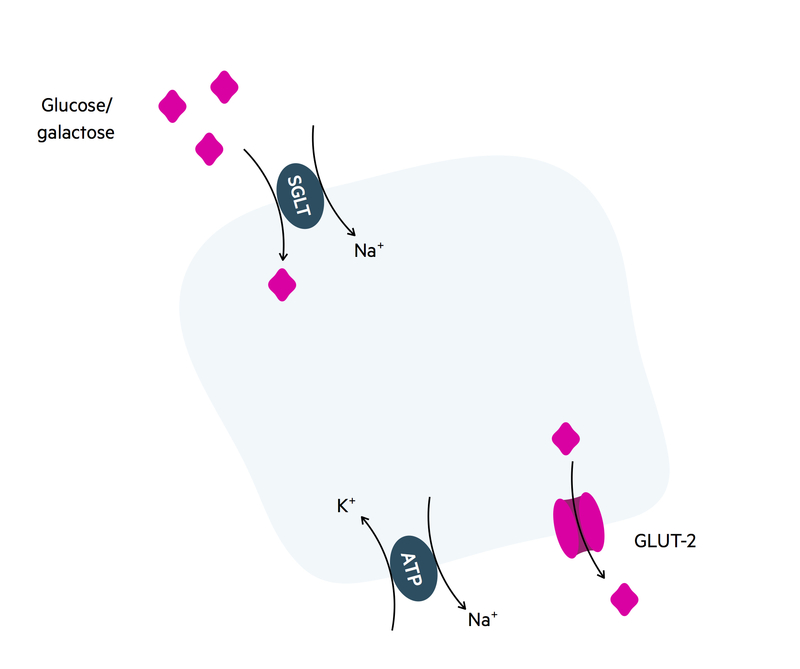 The absorption of lipids is dependent on the emulsification of fats by bile salts.

Chylomicrons are then excreted into the central lacteal of the villi and transported through the lymphatic system. At the junction of the lymphatic duct with the subclavian vein, chylomicrons join the systemic circulation and are taken to muscle and adipose tissue where free fatty acids can be liberated. The remnant chylomicron is then taken to the liver and broken down. This transport of lipids from the intestines to the liver is called the exogenous pathway. 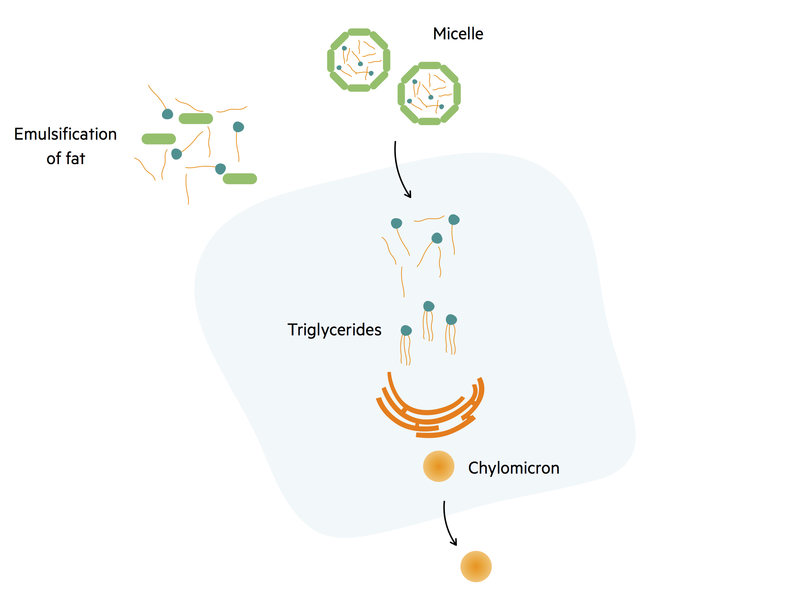 Iron absorption is critical for the formation of haemoglobin.

Iron ingested within the diet may be in the form of ferrous (Fe2+), ferric (Fe3+) or haem. Only ferrous iron and haem can be absorbed by the intestines. There are mechanisms at the luminal surface, which help to reduce ferric iron into ferrous to enable absorption.

Ferrous iron and haem are absorbed across the luminal membrane in different transporters:

Once inside the cell, iron can be converted into a cytosolic store of ferritin. Iron that is not required by the body remains in enterocytes as ferritin. From here it is either utilised or lost in the faeces during epithelial regeneration. Iron that is needed is absorbed across a basolateral transporter called ferroportin. Iron absorption across ferroportin can be regulated by the molecule hepcidin. This molecule is secreted by the liver when iron levels are high.

Binding of hepcidin to ferroportin leads to the lysosomal destruction of the receptor preventing iron absorption. Ferroportin can also be found in the reticuloendothelial system on the plasma membrane of macrophages. Once iron exits enterocytes it is transported within the blood by the molecule transferrin. Transferrin is produced by the liver. 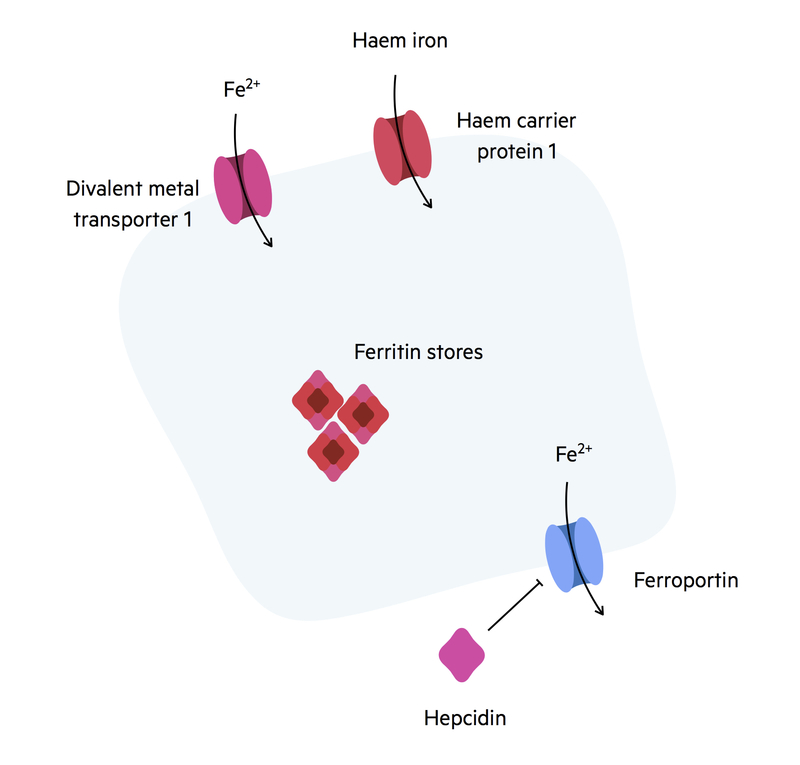 Calcium is an essential vitamin for bones and cellular processes.

Calcium is initially absorbed down its concentration gradient across the TRPV6 receptor on the luminal surface of enterocytes. It is then transported across the cell to the basolateral membrane by the molecule calbindin.

Calcium can then be absorbed into the bloodstream at the basolateral membrane by two different mechanisms: 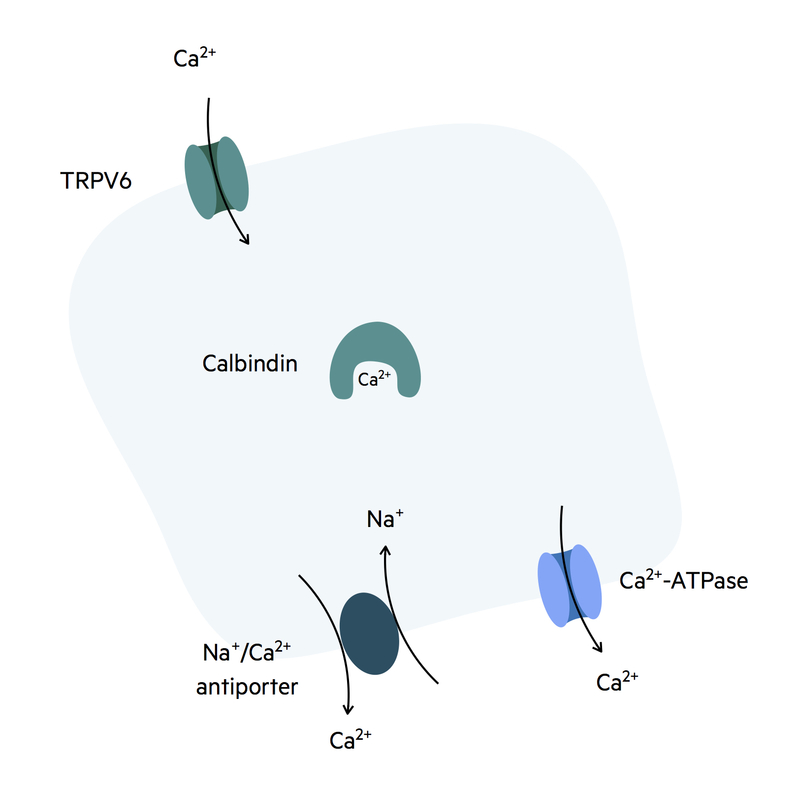 We'd love to hear your feedback on our 4/4 - Absorption notes.