In part III we look at the secretions of the hepatobiliary system and the exocrine pancreas. Their secretions, released into the small intestines are essential to the normal digestion and absorption of nutrients:

The pancreas is a retroperitoneal organ that has both exocrine and endocrine function. 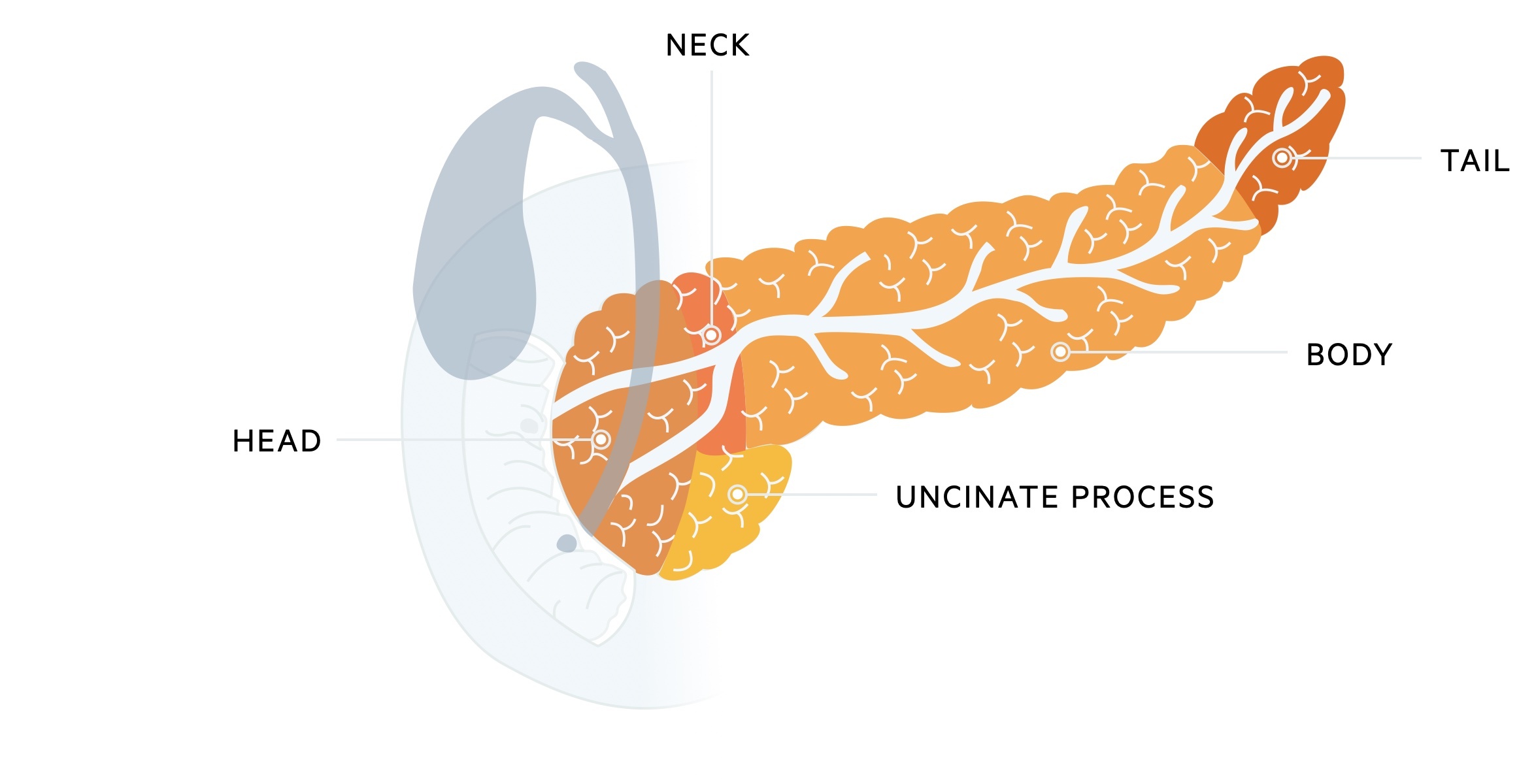 Abnormal fusion between the ventral and dorsal buds lead to anatomical variations: 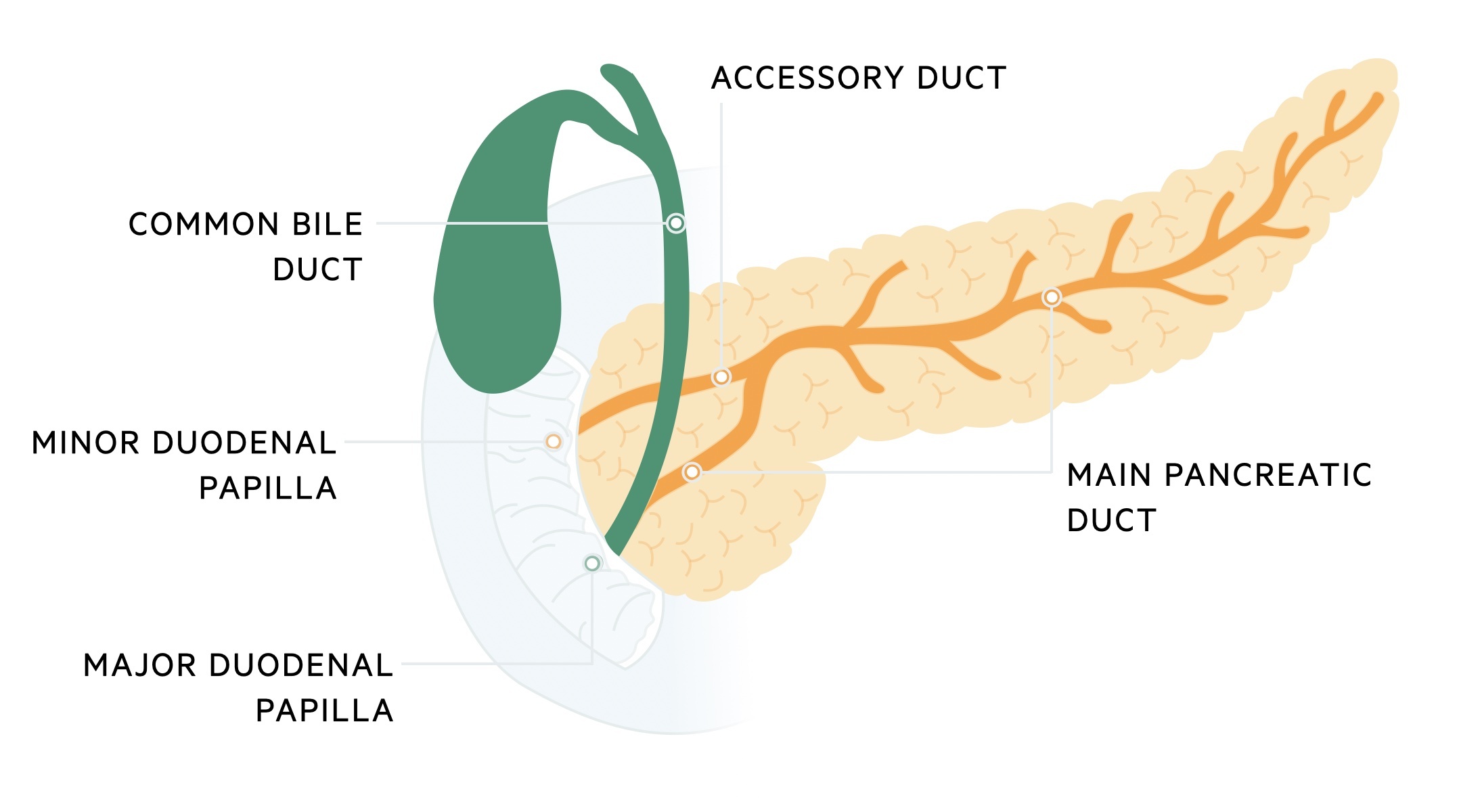 Endocrine cells make up 1-2% of the pancreatic mass. These cells are organised into special structures called islets of Langerhans.

The exocrine pancreas accounts for approximately 98-99% of the pancreatic tissue. It is organised into secretory sacs termed acini. The ductal cells, which line the pancreatic ducts, are important in the secretion of a bicarbonate-rich alkaline solution. This helps to neutralise the acidic chyme as it arrives in the small intestinal. Approximately 1-2 litres of pancreatic secretions are produced each day. 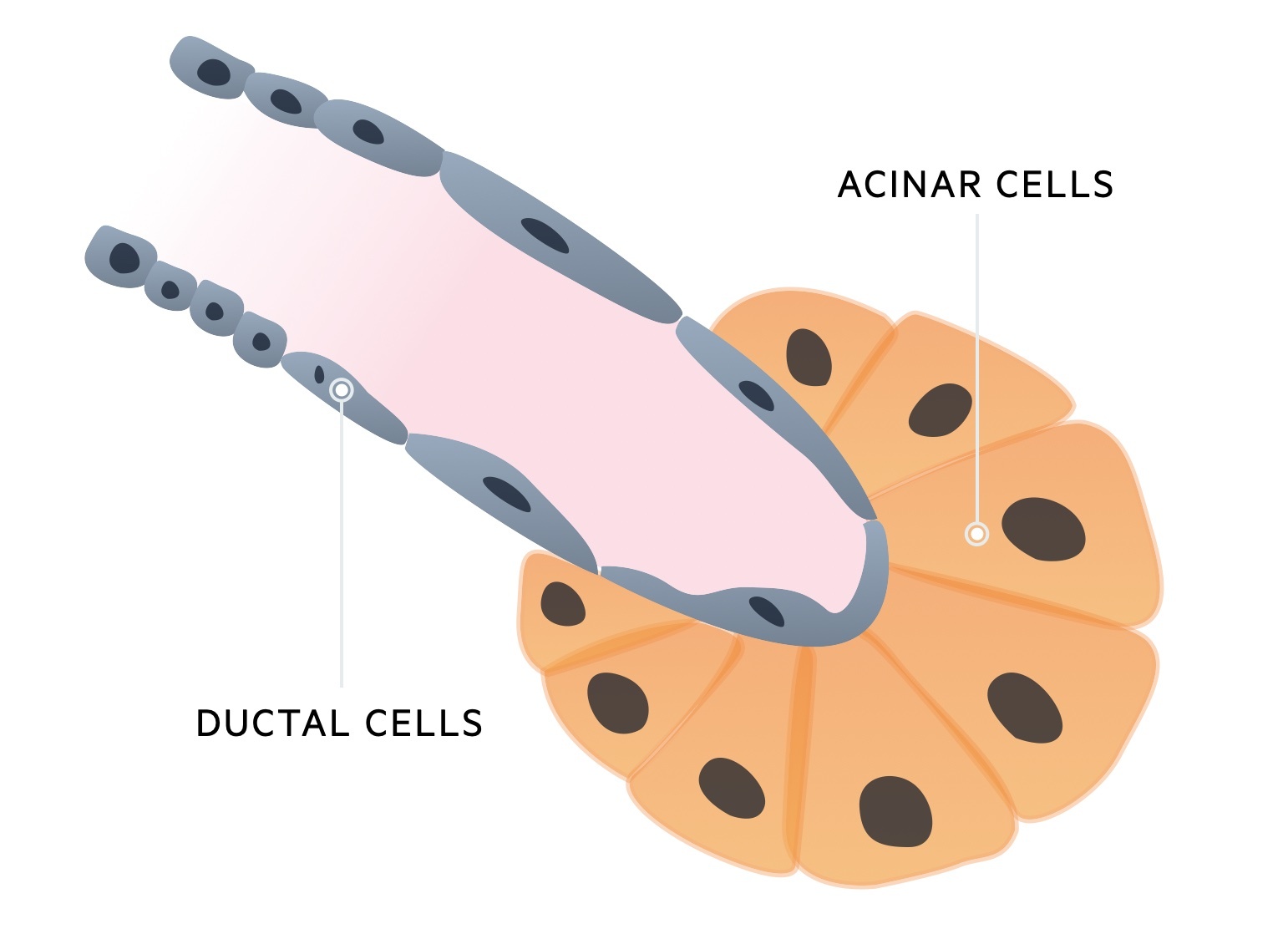 The acini drain to ducts which connect to form the main pancreatic duct that empties through the ampulla of Vater. These acinar cells are important into the secretion of pancreatic enzymes that help in the digestion of carbohydrates, fats and protein. Pancreatic enzymes work best in a neutral or slightly alkaline environment.

There are three important groups of enzymes that are secreted from the exocrine pancreas:

Pancreatic amylase is important for the digestion of carbohydrates. It is secreted in its active form and helps convert polysaccharides to the disaccharide maltose.

The deficiency of pancreatic enzymes can lead to malabsorption.

There are many causes of malabsorption. The causes can be categorised based on the underlying pathological mechanism which include mucosal injury, pancreatic enzyme deficiency, bile deficiency, or lymphatic problems.

In the Western world, coeliac disease is one of the most common causes of malabsorption that results from dietary sensitivity to gluten. This leads to mucosal injury and, therefore, damage to the absorptive surface.

Creon is a commonly used pancreatic supplement, which contains a mixture of digestive enzymes (e.g. lipases, proteases and amylases) from the pancreas of pigs.

The biliary system is composed of the gallbladder, the intrahepatic and extrahepatic ductal system.

The sphincter of Oddi guards the ampulla of Vater during times of fasting and prevents bile outflow into the duodenum. Cholangiocytes line the biliary ducts and they are important in the modification of bile as it is taken to the duodenum or stored in the gallbladder.

The primary function of bile is the emulsification of fats. It is also useful in the excretion of waste products.

Finally, before pancreatic lipase can digest the fat globules its requires the action of an additional enzyme called colipase. Colipase is able to displace bile salts. It then binds to lipase and anchors it to the surface of the fat globule. 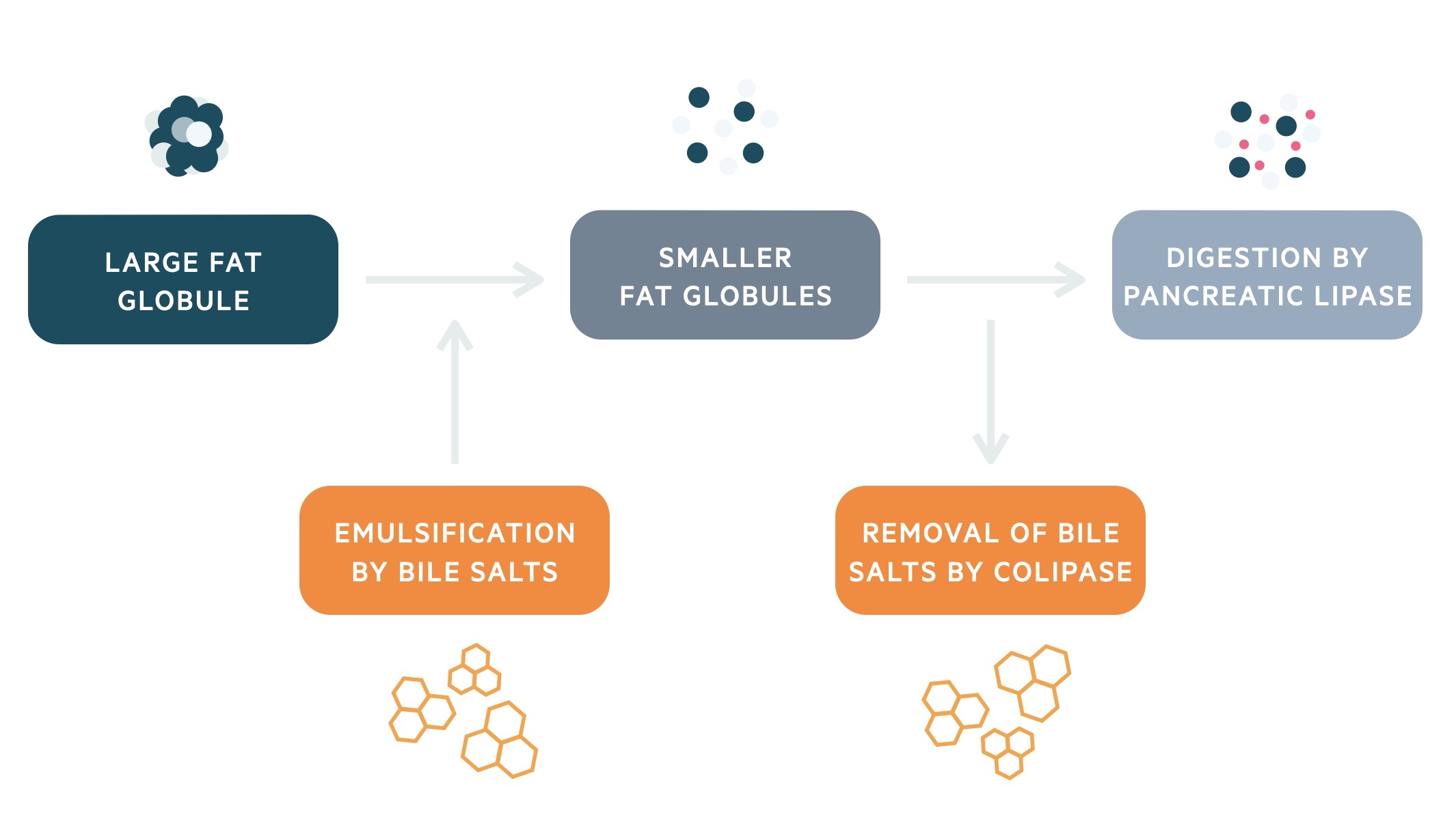 Digested lipids (including cholesterol and fat-soluble vitamins) are then aggregated into structures called micelles. Micelles have a lipid-rich core surrounded by a hydrophilic shell of bile salts and lecithin. Micelles, water-soluble structures, are taken to the luminal surface of enterocytes where the lipid content can be absorbed.

Bilirubin is the major excretory waste product of bile.

Bilirubin is a product of haemoglobin breakdown from within red blood cells (erythrocytes). The process of bilirubin excretion involves three key processes; release of bilirubin from haemoglobin, transfer to the liver for conjugation and excretion into bile.

Old erythrocytes can be broken down by macrophages predominantly located in the spleen. Other organs involved in this process include the liver and lymph nodes.

Haem is metabolised further by the enzyme haem oxygenase 1 (HO-1). This enzyme breaks haem into iron, carbon monoxide and biliverdin. Biliverdin is then reduced to bilirubin by the action of biliverdin reductase.

Bilirubin is bound to albumin in the serum and carried to the liver. Within the liver bilirubin is conjugated by the enzyme glucuronyltransferase (full title: Uridine diphosphoglucuronate (UDP)-glucuronosyltransferases (UGTs)). This is a process that involves the addition of a glucuronic acid to bilirubin (glucuronidation). Reduced activity of this enzyme causes the condition Gilbert’s syndrome.

Gilbert’s syndrome, a common autosomal recessive condition, is caused by a mutation in the gene for UGT and impaired glucuronidation. It manifests as recurrent episodes of mild unconjugated hyperbilirubinaemia during times of intercurrent illness. During episodes, scleral jaundice can often be seen. Blood tests (except hyperbilirubinaemia) are usually normal and patients are asymptomatic with no treatment required.

Once conjugated, bilirubin is excreted into bile and released into the duodenum. Bilirubin is converted into urobilinogen by bacteria. After conversion to urobilinogen, the excretion of bilirubin takes two different pathways: major and minor

Control of hepatobiliary secretions occurs upon entry of acidic and fat-rich chyme into the duodenum.

The arrival of the acidic and fat-rich chyme leads to the release of two important enterogastrones: secretin and cholecystokinin (CCK). An enterogastrone is a hormone secreted by the upper intestinal mucosa that has an inhibitory action on gastric motility and secretion.

The amount of bicarbonate that is secreted is proportional to the amount of acid that enters the duodenum.

All three major pancreatic enzymes are packaged into zymogen granules and released together by exocytosis on stimulation. The total amount of enzymes released varies depending on the type of meal (fatty meals having the greatest effect), but the proportion of individual enzymes does not alter with meals. The content of the zymogen granules (e.g. proportion of different enzymes) can be altered long-term in accordance to changes in diet.

CCK also has an effect on the gallbladder. It initiates contraction of the gallbladder leading to the release of bile and stimulates relaxation of the sphincter of Oddi allowing bile to flow into the duodenum.

The enterohepatic circulation is important for the reabsorption of bile salts that are secreted into bile.

Approximately 95% of bile salts are reabsorbed in the terminal ileum and passed back to the liver via the portal system.

Disruption to the enterohepatic circulation (e.g. Crohn’s disease) can lead to the development of gallstones. The imbalance between cholesterol, bile salts and lecithin can lead gallstone formation.

We'd love to hear your feedback on our 3/4 - Secretion notes.