COPD is a progressive, obstructive airway disease that is not fully reversible. It results from disease of the airways and parenchyma in the form of chronic bronchitis and emphysema.

COPD is extremely common, preventable and treatable in the majority of cases. This is because it occurs secondary to smoking-related damage.

The disease is very heterogenous with chronic airflow limitation resulting from a mixture of small airway disease (bronchitis) and destruction of the lung parenchyma (emphysema). The extent to which process is predominant differs from patient to patient. 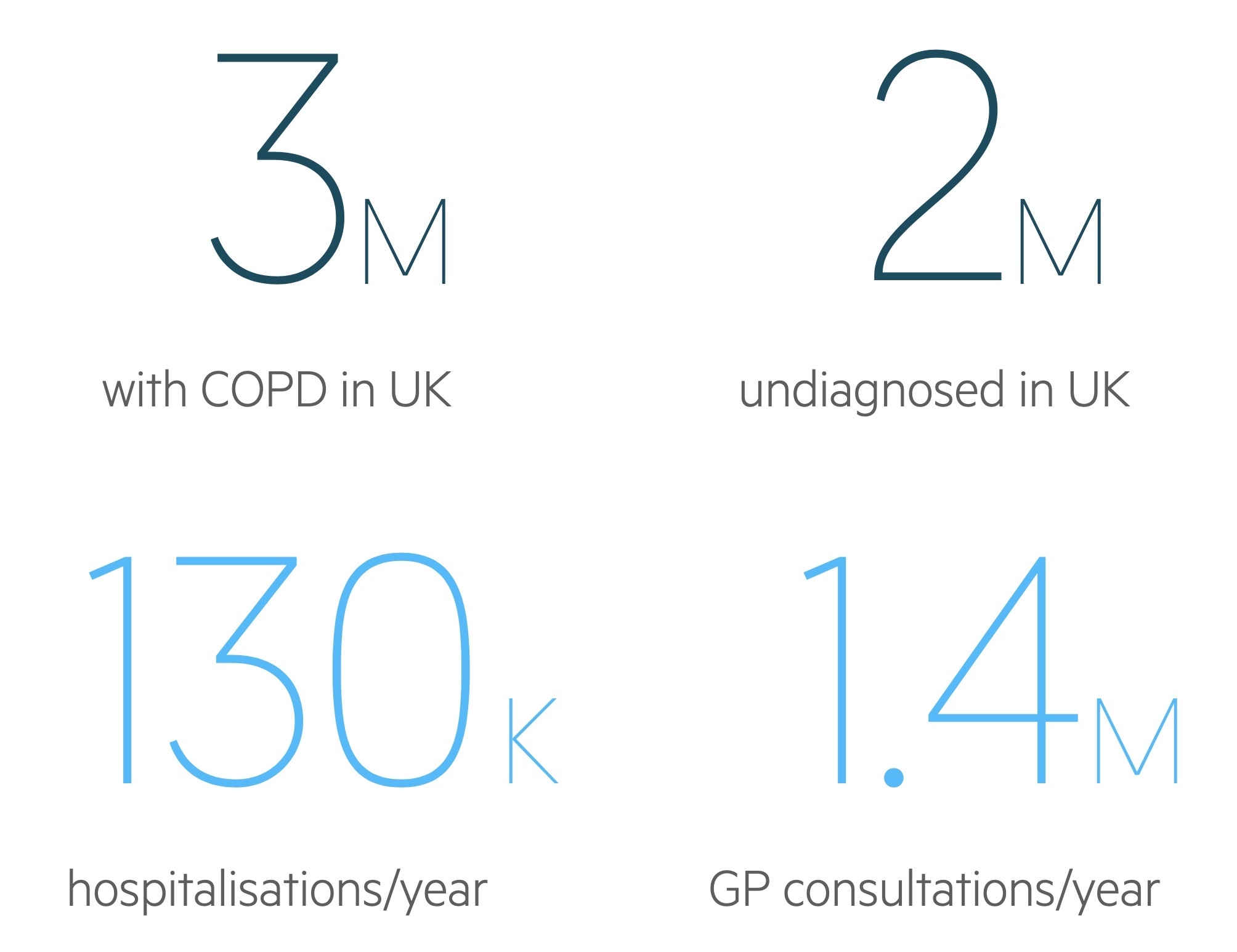 Approximately 3 million people in the UK are diagnosed with COPD and a suspected 2 million more may be undiagnosed.

COPD is a very common condition and accounts for a significant cause of morbidity and mortality within the UK.

The true prevalence of COPD is thought to be underestimated as many people remain undiagnosed. The condition predominantly affects adults > 40 years old and traditionally affected men at much higher frequencies. However, in more recent cohorts there is a similar sex prevalence.

Smoking is by far the most important aetiological factor.

Approximately 90% of cases of COPD are associated with smoking. However, only 10% of smokers will develop it, indicating the presence of a co-factor such as a genetic predisposition. It is important to consider passive smoking and occupational pollutants in patients with COPD who are non-smokers.

Pack years =  (number of cigarettes smoked per day, divided by 20, multiplied by the number of years smoked)

Alpha-1 antitrypsin is a protease inhibitor that is synthesised by the liver. It acts in the lung parenchyma to oppose the action of elastase. Elastase is a protease that causes the breakdown of elastin, a protein important to the structural integrity of the alveoli. This causes emphysema.

For more information see our notes on Alpha-1-antitrypsin deficiency.

COPD is a disease of both the airways and the alveoli.

Chronic bronchitis refers to inflammation of the bronchi, defined as a chronic productive cough for three (or more) months in two consecutive years where other causes are excluded. Pathologically it is characterised by chronic inflammation with neutrophilic infiltration, CD8+ T lymphocytes and macrophages. This differs from asthma, which has a predominant eosinophil infiltration with CD4+ T lymphocytes.

Emphysema is the permanent enlargement of airspaces distal to the terminal bronchiole when interstitial pneumonias (e.g. interstitial lung disease & fibrosis) are excluded. Destruction of the lung parenchyma results in a reduced area for gas exchange and chronic hypoxia.

Inflammatory processes lead to the production of proteases by inflammatory cells such as macrophages and neutrophils. The protease elastase causes the destruction of elastin, a protein important to the structural integrity of the alveoli.

Loss of elastin has two effects:

Cor pulmonale refers to right ventricular impairment secondary to pulmonary disease. In the developed world COPD is the most common cause.

Chronic productive cough and dyspnea are the hallmarks of COPD. 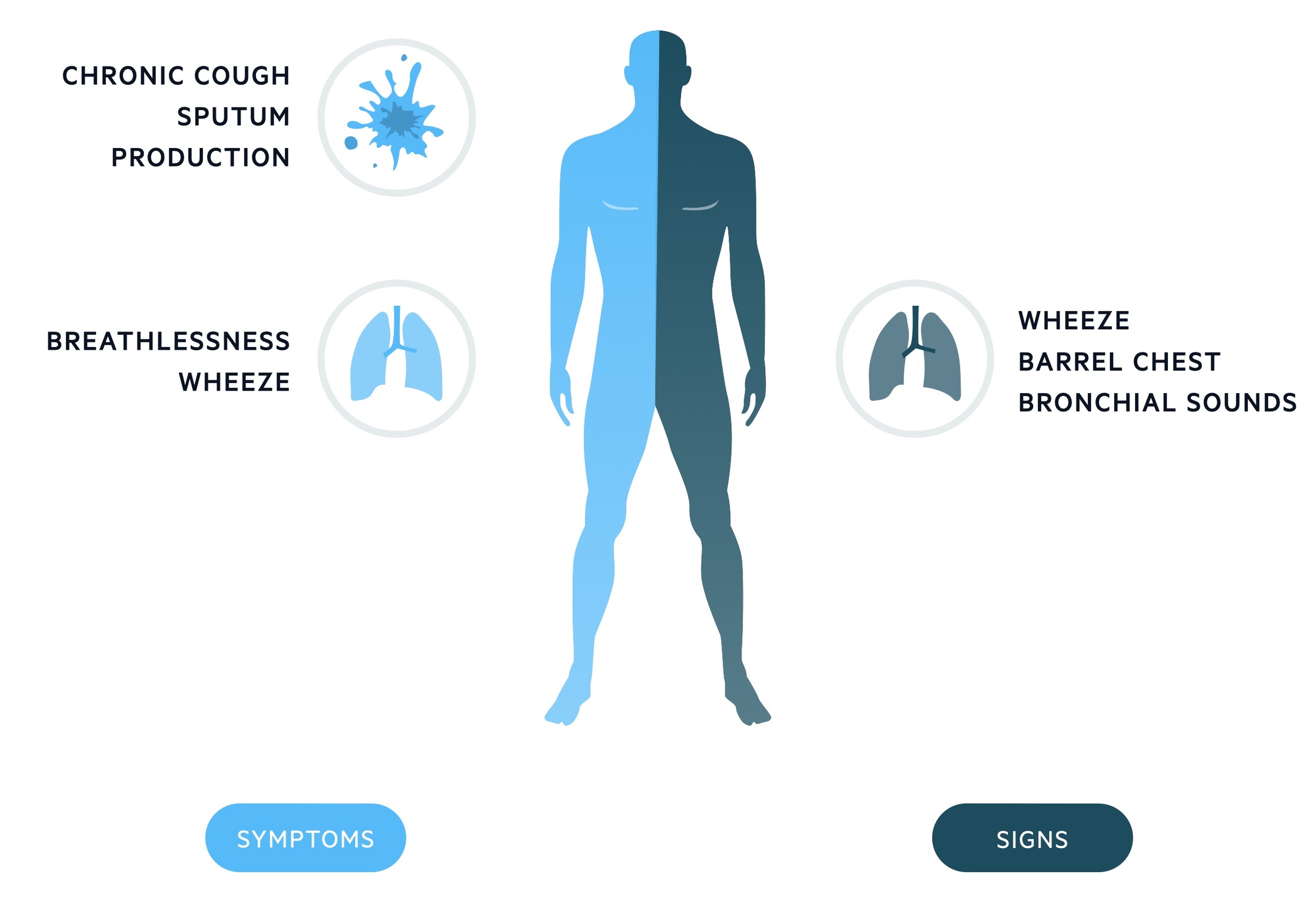 There may be clinical features in the history and on examination, which are suggestive of an alternative diagnosis such as lung cancer or pulmonary embolism. These require urgent investigation.

An acute exacerbation of COPD usually presents with similar features to chronic 'stable' COPD, which are listed above. The key is that an exacerbation refers to an acute, sustained worsening in the patients symptoms beyond the normal, expected, day-to-day variation.

An acute exacerbation may be mild, or life-threatening requiring hospital admission and respiratory support. Commonly, an exacerbation is driven by an underlying infection, but they can also be non-infective. 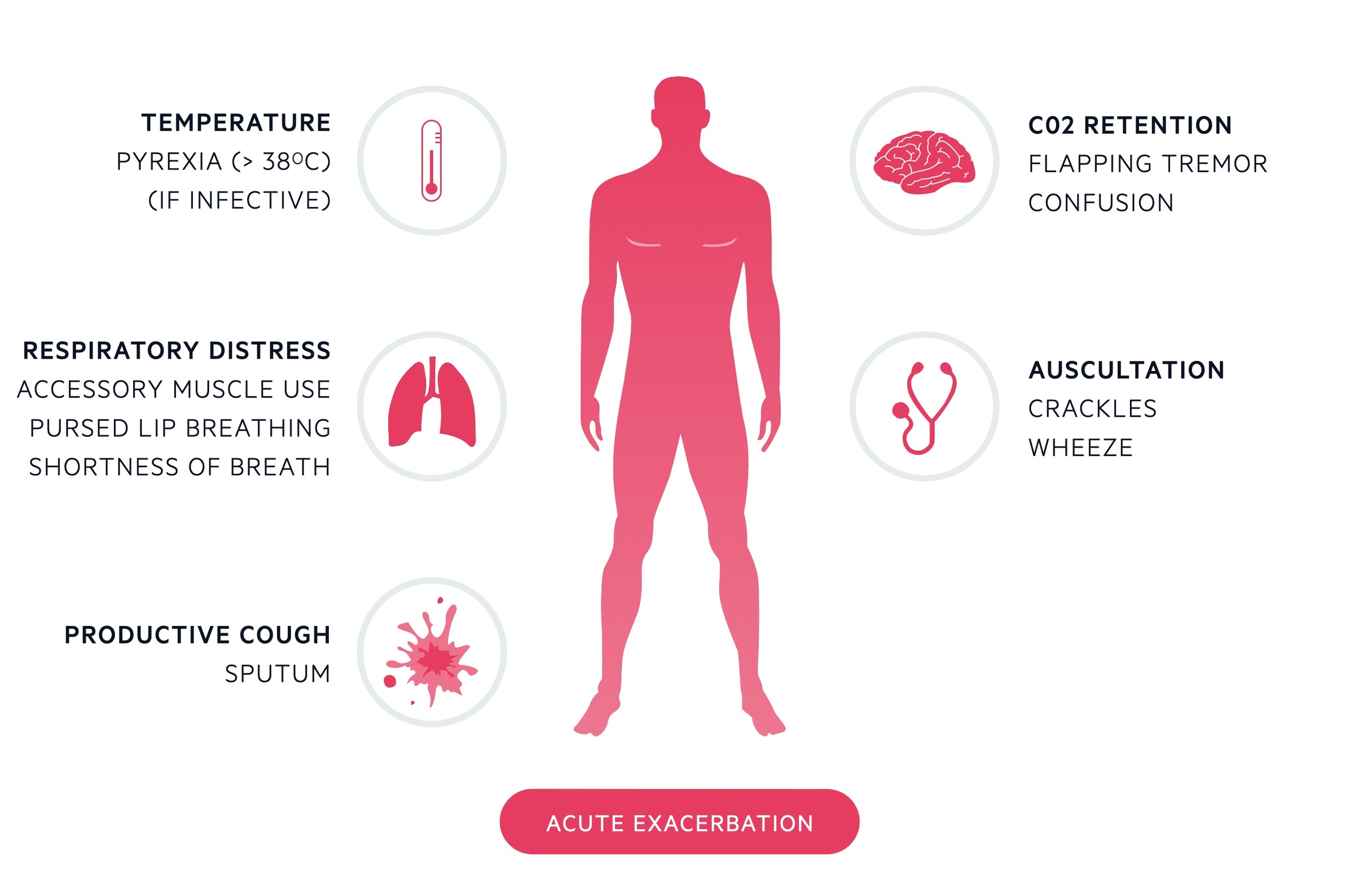 The Medical Research Council (MRC) dyspnoea scale is used to grade the severity of breathlessness.

The MRC dyspnoea scale is divided from 1 to 5.

The diagnosis of COPD is suspected clinically, which is then confirmed by spirometry.

Patients with suspected COPD should be referred for spirometry to confirm the diagnosis.

Spirometry is essential for both the diagnosis of COPD and to assess the severity.

Spirometry measures the flow and volume of air during inhalation and exhalation: 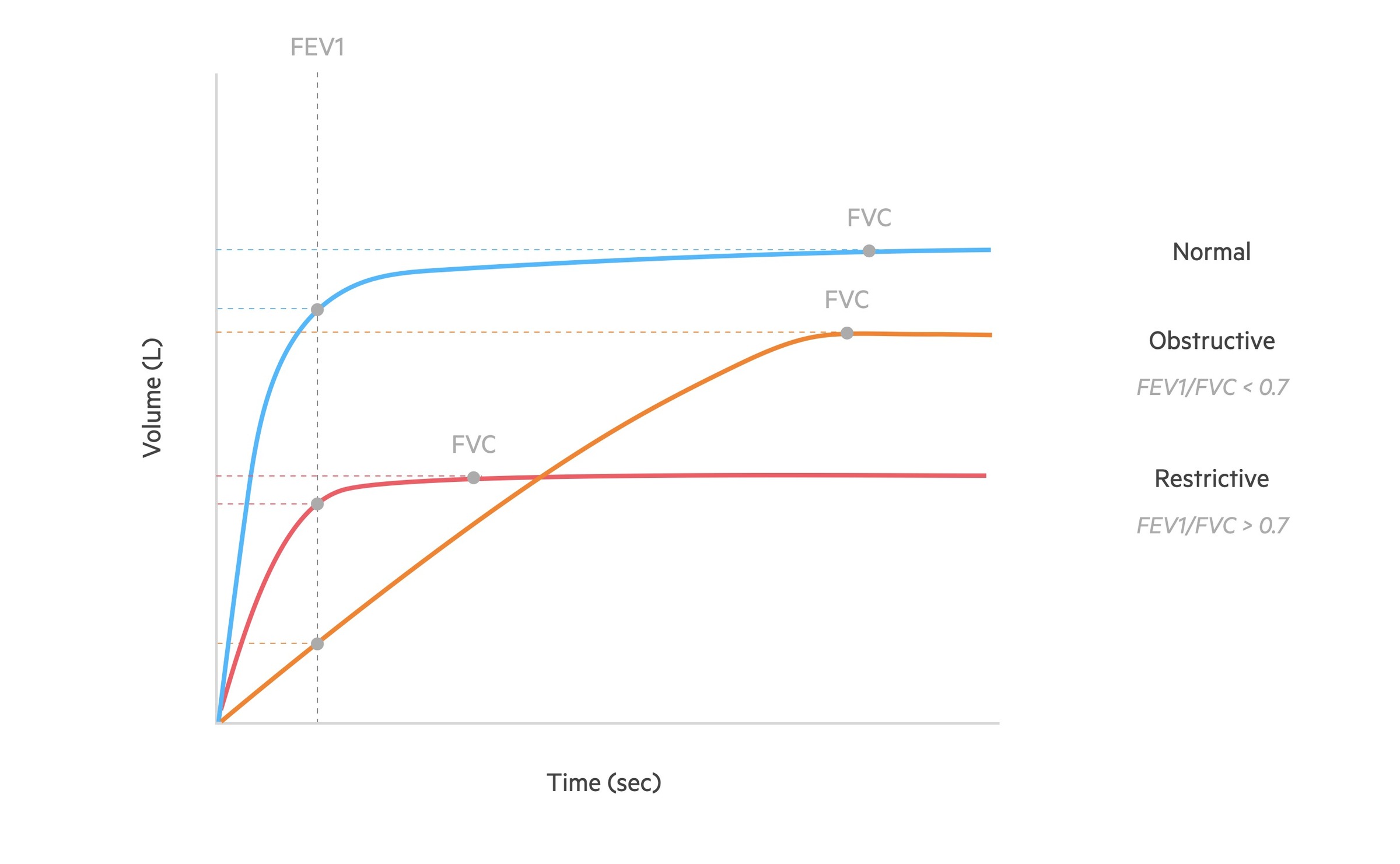 Typical clinical features of COPD with a post-bronchodilator FEV1/FVC ratio < 0.7 is consistent with a diagnosis of COPD.

Features supportive of COPD (versus asthma) include:

In patients with an FEV1/FVC < 0.7 but without typical features of COPD, an alternative diagnosis should be considered (e.g. bronchiectasis).

Spirometry may be used to assess the severity of COPD.

Below we show the severity of COPD based on the NICE clinical guidance 101 and reproduced in the updated NICE guidance 115.

At the time of diagnosis, all patients require a chest radiograph, full blood count and body mass index calculated. 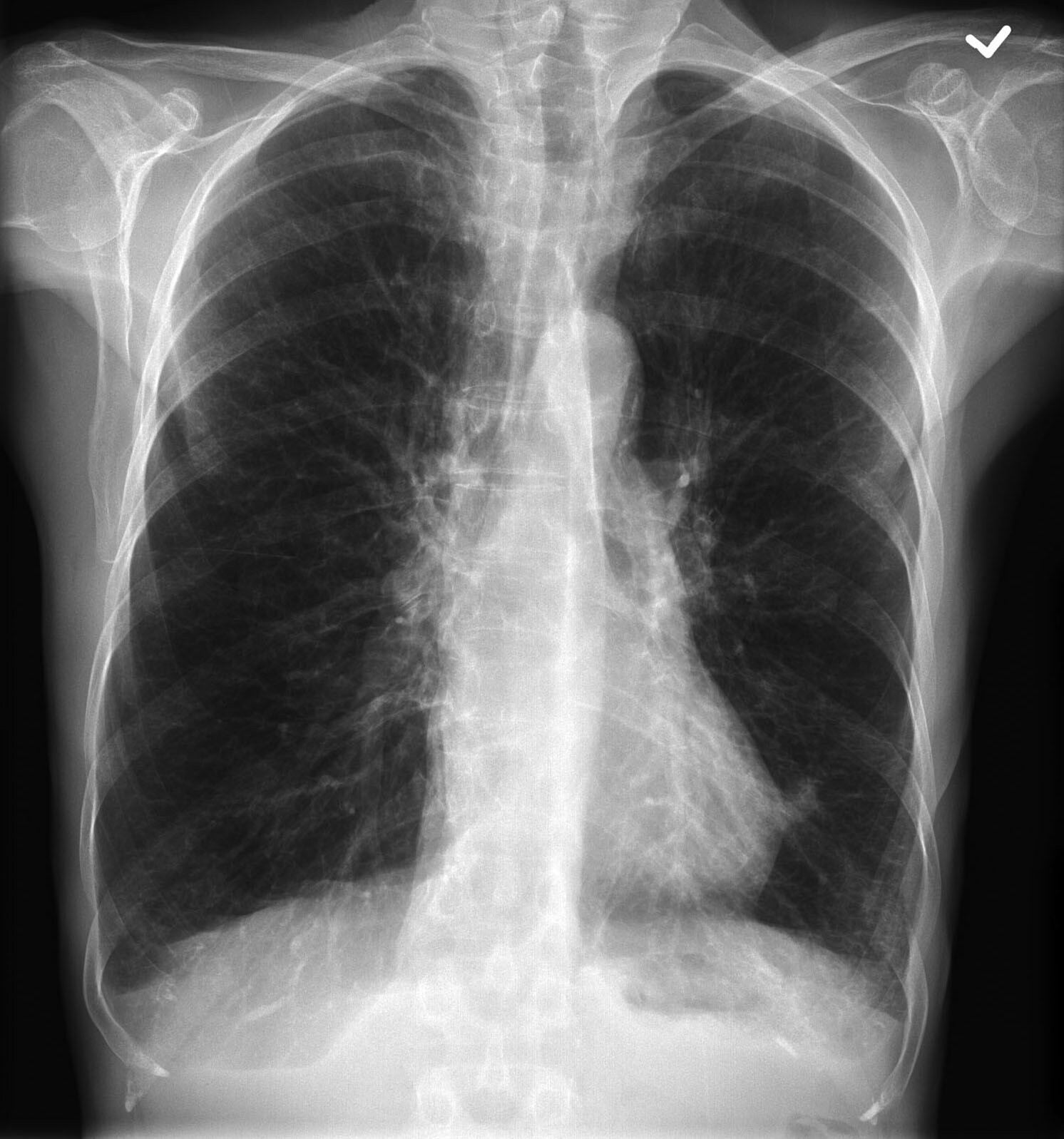 Many patients with COPD can be managed in general practice without need for specialist referral.

Patients with mild or moderate COPD may be managed in general practice without need for specialist referral, which includes assessment by a respiratory clinical nurse specialist.

Indications for specialist referral to a clinician or nurse specialising in respiratory disease include:

All patients with COPD should be offered education, smoking cessation, vaccinations, pulmonary rehabilitation (if indicated) and pharmacotherapy (e.g. inhalers).

It is important to review and revisit the principles of COPD care at all stages of severity and during every consultation.

The principles of COPD care include:

It is important to educate patients about their condition and check inhaler technique at every consultation.

All patients should be encouraged to stop smoking, offered nicotine replacement therapies and/or referred to smoking cessation services.

The Fletcher and Peto graph shows the effects of smoking cessation. The green line follows the normal trajection of a healthy individuals FEV1 as they age. The red line shows the trajection of a smoker. The orange lines show the effect of smoking cessation - the FEV1 begins to fall at the rate of a non-smoker though existing damage is not reversed. 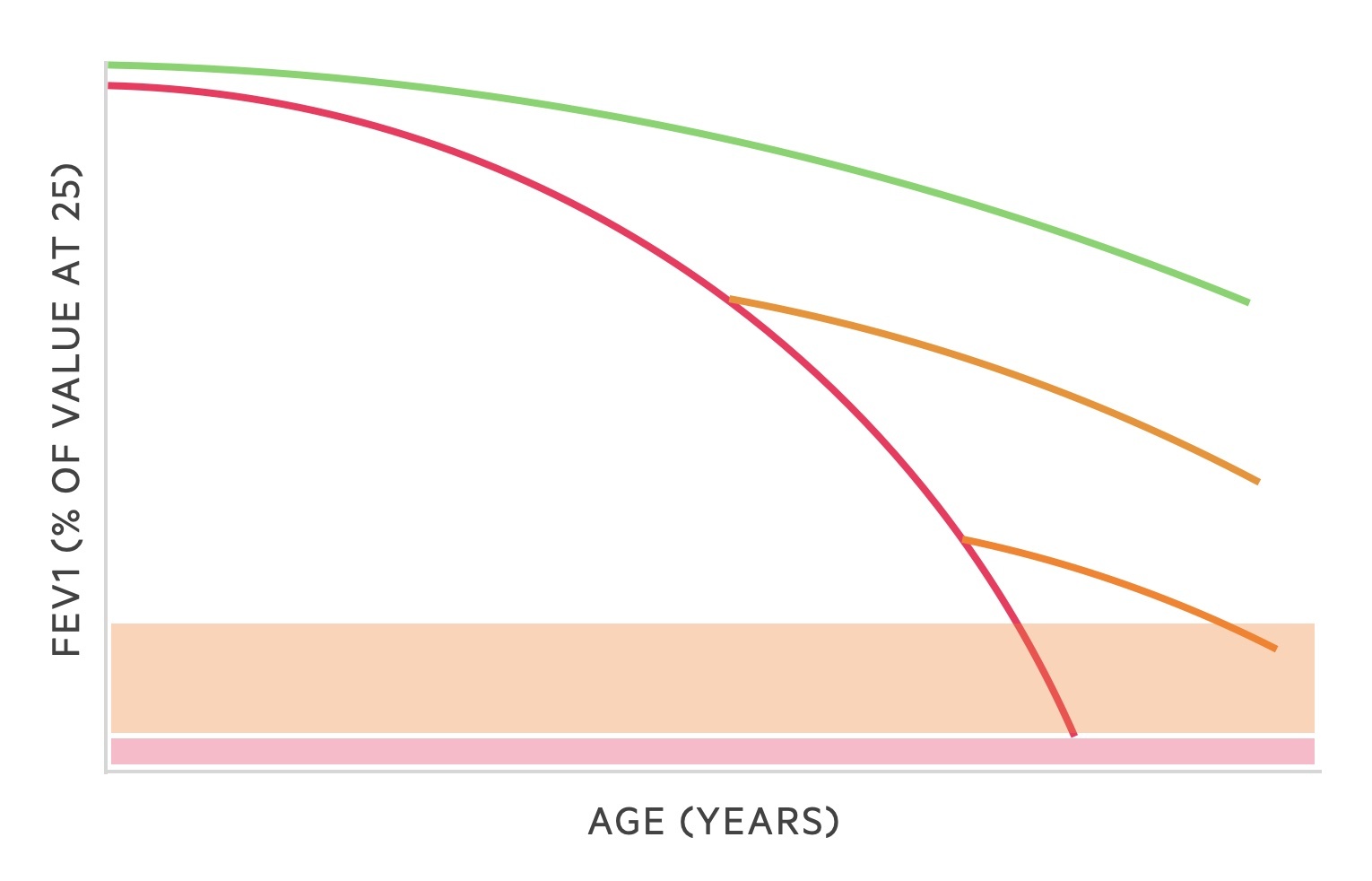 Patients with COPD should be offered the seasonal influenza vaccine and the pneumococcal vaccine.

This refers to a multidisciplinary programme that aims to optimise the physical and social performance of patients suffering from long-term chronic lung conditions like COPD. It involves exercise training, health education, and breathing techniques over a series of sessions. Nutritional education and behavioural techniques are also utilised.

Pulmonary rehabilitation is offered to any patient with COPD who feels disabled by their condition. It is not suitable in patients unable to walk, who have unstable angina or have recently suffered a heart attack.

This refers to helping patients manage their symptoms including how to manage acute exacerbations. Education is crucial and patients are often provided with a 'rescue pack' that contains antibiotics and steroids.

Patients with COPD may have complications of their disorder (e.g. right heart failure) or have other smoking-related illnesses such as ischaemic heart disease, heart failure or cancer. It is important to optimise their co-morbidities to help improve their clinical symptoms. For example, heart failure and anaemia may exacerbate breathlessness symptoms that could be wrongly attributed to COPD.

It is also important to recognise features of anxiety and depression, which commonly worsen symptoms of COPD.

Inhalers form the backbone of medical therapy for the treatment of COPD. Steroids and antibiotics are commonly used for acute exacerbations and long-term oxygen therapy may be needed in severe cases. These are discussed below.

Inhaled therapies form the cornerstone of management in COPD.

Inhaled therapy should be offered to patients with persistent symptoms despite basic interventions (e.g. smoking cessation, pulmonary rehabilitation, self-management). This should be revisited before each escalation of therapy. 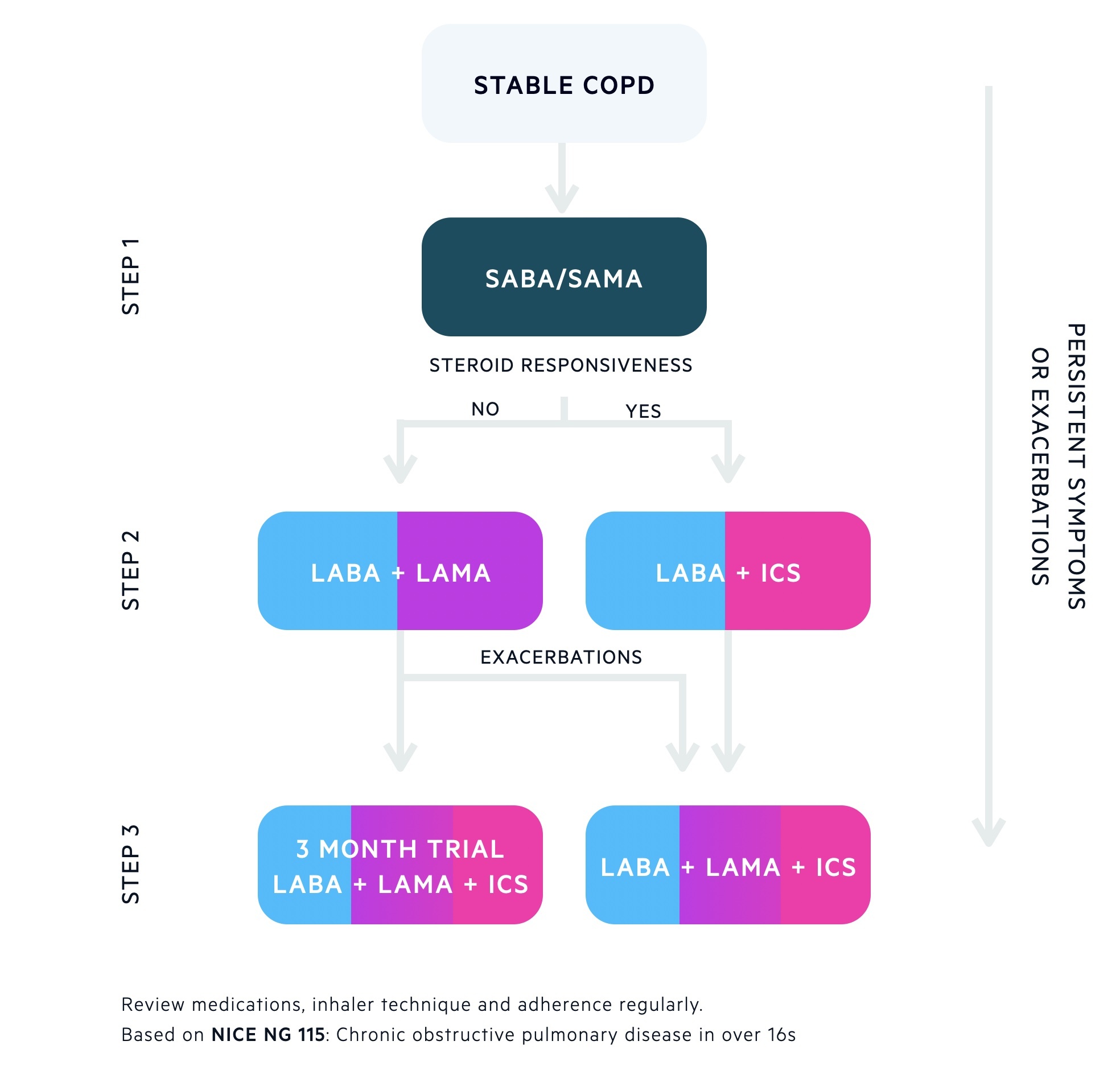 There are several oral pharmacological options that may be offered to patients with COPD.

Rarely, surgical intervention may be offered to some patients. Surgical options include:

Patients with an acute exacerbation of COPD often require admission to hospital for treatment.

An acute exacerbation of COPD refers to a sustained worsening of a patients clinical symptoms above and beyond the normal day-to-day variation. Some patients may be managed at home whereas others can be critically unwell needing hospital admission and non-invasive ventilation.

Common clinical features of an acute exacerbation include:

Deciding on whether a patient requires admission to hospital for treatment of an acute exacerbation of COPD should take into account different factors.

Factors that support hospital admission include:

All patients admitted to the hospital with an acute exacerbation of COPD require the following investigations:

All patients with an acute exacerbation of COPD should initially be managed with an 'airway, breathing, circulation' approach as they can be critically unwell.

If there is any concerns about the airway, level of consciousness or there are features of respiratory failure then senior support should be sought immediately.

Exacerbations are treated with:

Intravenous theophylline may be considered in severe cases, which do not improve with standard treatment (i.e. nebulisers). Requires cardiac monitoring. Senior advice should always be sought.

Oxygen therapy must be used carefully in patients with COPD, typically saturations of 88-92% are targeted. ABGs may be necessary to monitor for CO2 retention.

If patients have evidence of T2RF, oxygen therapy should be trialed using a venturi mask for 1 hour with repeat ABG. If there is persistent evidence of T2RF, or they decline during the trial period, then non-invasive ventilation should be considered (i.e. BiPAP). BiPAP refers to Bilevel Positive Airway Pressure, which helps to 'blow off' excess carbon dioxide and normalise pH.

Patients requiring BiPAP should be managed in a high-dependency unit (HDU) setting or a specialist ward with nurses who are able to look after patients receiving BiPAP. Moreover, before starting BiPAP it is crucial to discuss and set ceilings of care (often involves discussion with ITU), to exclude any contraindications (e.g. undrained pneumothorax, coma, facial trauma/burns, cardiovascular instability) and plan to continually monitor.

There are two settings on a BiPAP machine:

The difference between the IPAP and EPAP is crucial to blow off carbon dioxide. Patients are typically started on 12/5 and a repeat ABG is completed after one hour, which guides response to therapy.

Further information on BiPAP and NIV is beyond the scope of these notes.

Patients with COPD may benefit from long-term oxygen therapy (LTOT).

Long-term oxygen therapy (LTOT) is reserved for patients who meet the following criteria:

LTOT is required for at least 15 hours a day for a benefit to be seen. Patients who smoke should be explained the dangers of mixing oxygen and cigarettes.

COPD is a major cause of mortality within the UK.

Exacerbations of COPD are a frequent cause of hospital admission, particularly in the winter months when respiratory pathogens are prevalent.

Common complications associated with COPD include:

We'd love to hear your feedback on our COPD notes.