Hypercalcaemia is defined as a serum corrected calcium concentration > 2.6 mmol/L.

Hypercalcaemia is a common electrolyte abnormality. It occurs when the serum calcium concentration exceeds the amount by which calcium can be deposited in bone or excreted by the kidneys.

Corrected calcium levels > 2.6 mmol/L are defined as hypercalcaemia. Depending on the level of serum calcium, hypercalcaemia can be graded:

Calcium is distributed between bone and the intra- and extra-cellular compartments.

The majority of body calcium, 99%, is stored in bone.

Approximately 1% of total body calcium is found within the intracellular compartment. Here it plays a key role in intracellular signalling.

Around 0.1% of total body calcium is found within the extracellular pool, this is divided into: 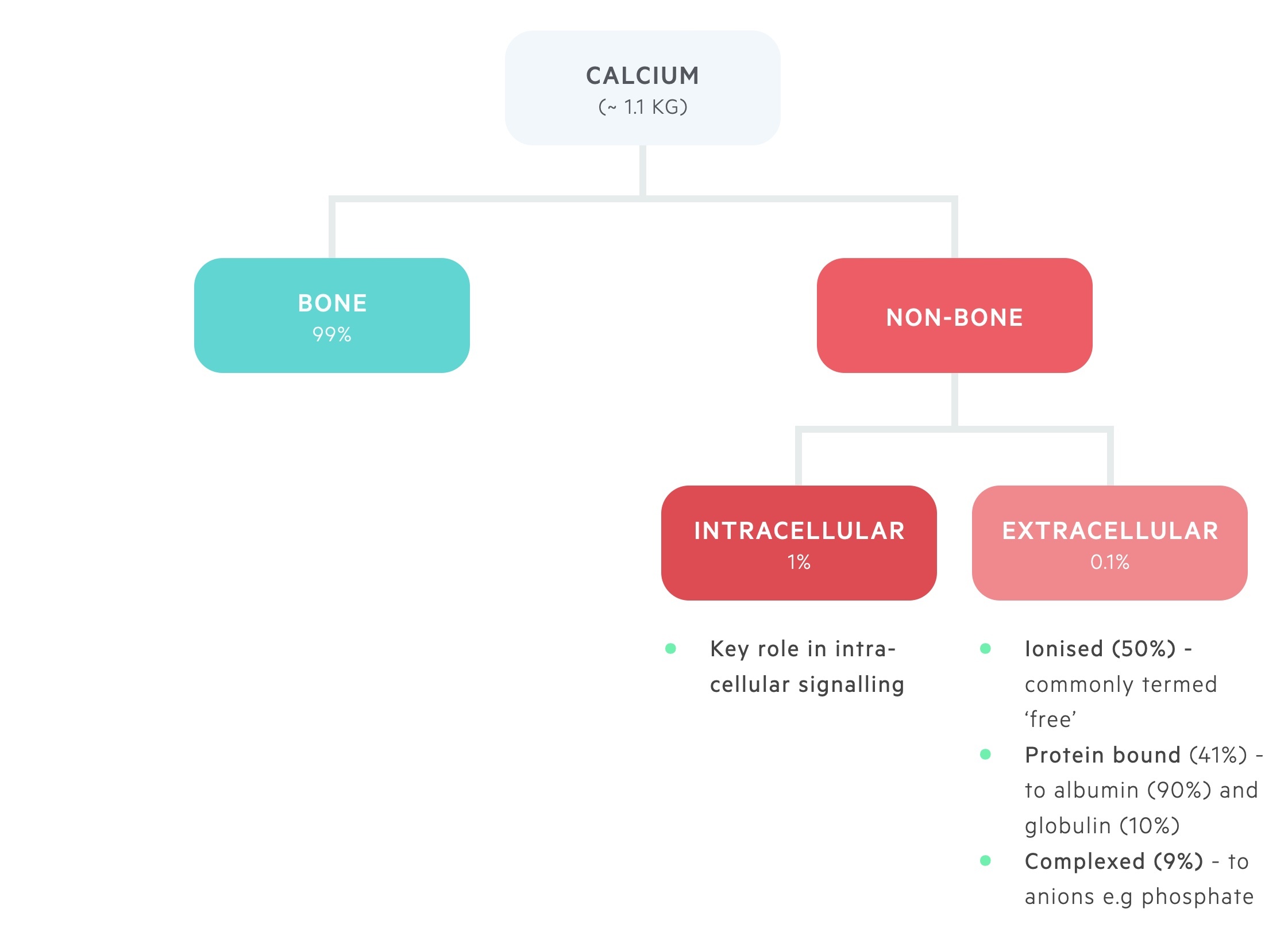 The balance between stored calcium and the extracellular pool of calcium is a closely regulated process. It is controlled by the interaction of three hormones; parathyroid hormone (PTH), vitamin D and calcitonin.

Conversely, a rise in extracellular calcium detected by the CaSR has the opposite effect. It leads to a reduction in the release of PTH and stimulates the release of calcitonin. This combined effect helps decrease bone resorption and promotes calcium excretion in the kidneys.

Serum calcium levels may be 'corrected' by adjusting them for the albumin level.

As described in the chapter above around 40-45% of extracellular calcium is bound to albumin and around 50% physiologically active and ‘free’ or ionised. Due to calcium binding to albumin, a corrected calcium level is determined by taking into account the albumin level. With modern laboratories, a corrected calcium result is normally automated.

It is estimated that the serum calcium concentration falls by 0.25 mmol/L (0.8 mg/dL) for every 10 g/L (1 g/L) fall in serum albumin concentration. This can be calculated manually using the following formula:

Malignancy and primary hyperparathyroidism collectively account for > 90% of cases of hypercalcaemia.

Malignancy is the most common cause of hypercalcaemia in the inpatient population. Up to 30% of cancers develop hypercalcaemia as part of the natural disease course, a development that is associated with a poor prognosis.

Hypercalcaemia commonly occurs due to release of parathyroid related peptide (PTHrP), which mimics the action of PTH. Other mechanisms include osteolytic damage to bone or activation of vitamin D.

For more information, see our notes on Malignant hypercalcaemia.

Primary hyperparathyroidism is the most common cause of hypercalcaemia in the general population. It occurs due to excess release of PTH, which leads to bone resorption and excess calcium release. It commonly occurs secondary to a parathyroid adenoma.

Other mechanisms include parathyroid hyperplasia and rarely parathyroid cancer. Primary hyperparathyroidism may be part of a genetic syndrome known as Multiple endocrine neoplasia.

High concentrations of vitamin D lead to hypercalcaemia by increasing calcium absorption and bone resorption. This usually occurs due to inadvertent ingestion of excess amounts of vitamin D or continuing a high loading dose for too long.

Some conditions lead to excess endogenous production of activated vitamin D, which include:

Milk alkali syndrome is due to the excess ingestion of milk or calcium containing compounds (e.g. calcium carbonate).

The full syndrome is characterised by:

Hypercalcaemia is compounded by metabolic alkalosis, which affects calcium excretion in the distal convoluted tubule of the nephron. In addition, the high calcium levels cause renal vessel vasoconstriction that causes renal impairment and further compounds calcium excretion. Stopping the excess ingestion will lead to improvement in alkalosis and renal function as long as irreversible damage has not occurred.

FHH is an autosomal dominant condition caused by a mutation to calcium-sensing receptors (CaSR). CaSRs play an important role in calcium regulation:

FHH normally causes a mildly elevated calcium with a PTH that is either mildly elevated or at the upper limit of normal. As such it is excellent at biochemically mimicking primary hyperparathyroidism. It can be distinguished by looking for the hypocalciuria that is present in FHH but absent in PHPT.

Many individuals will be asymptomatic (particularly with primary hyperparathyroidism) and the abnormality is picked up incidentally on routine blood tests. Clinical features, when present, may reflect both the hypercalcaemia and the raised PTH (in cases where this is elevated). In those who are symptomatic the classic phrase ‘bones, stones, thrones, abdominal groans, and psychic moans’ can act as an aide-mémoire.

Symptoms, when present, are often vague and non-specific - a high index of suspicion is needed. It is also important to look for signs of the underlying diagnosis. Usually a diagnosis of cancer is previously known but this may be the first presentation.

Patients with longstanding hypercalcaemia may also develop cardiovascular disease with calcium deposits in vessels and on valves and an increased rate of hypertension. 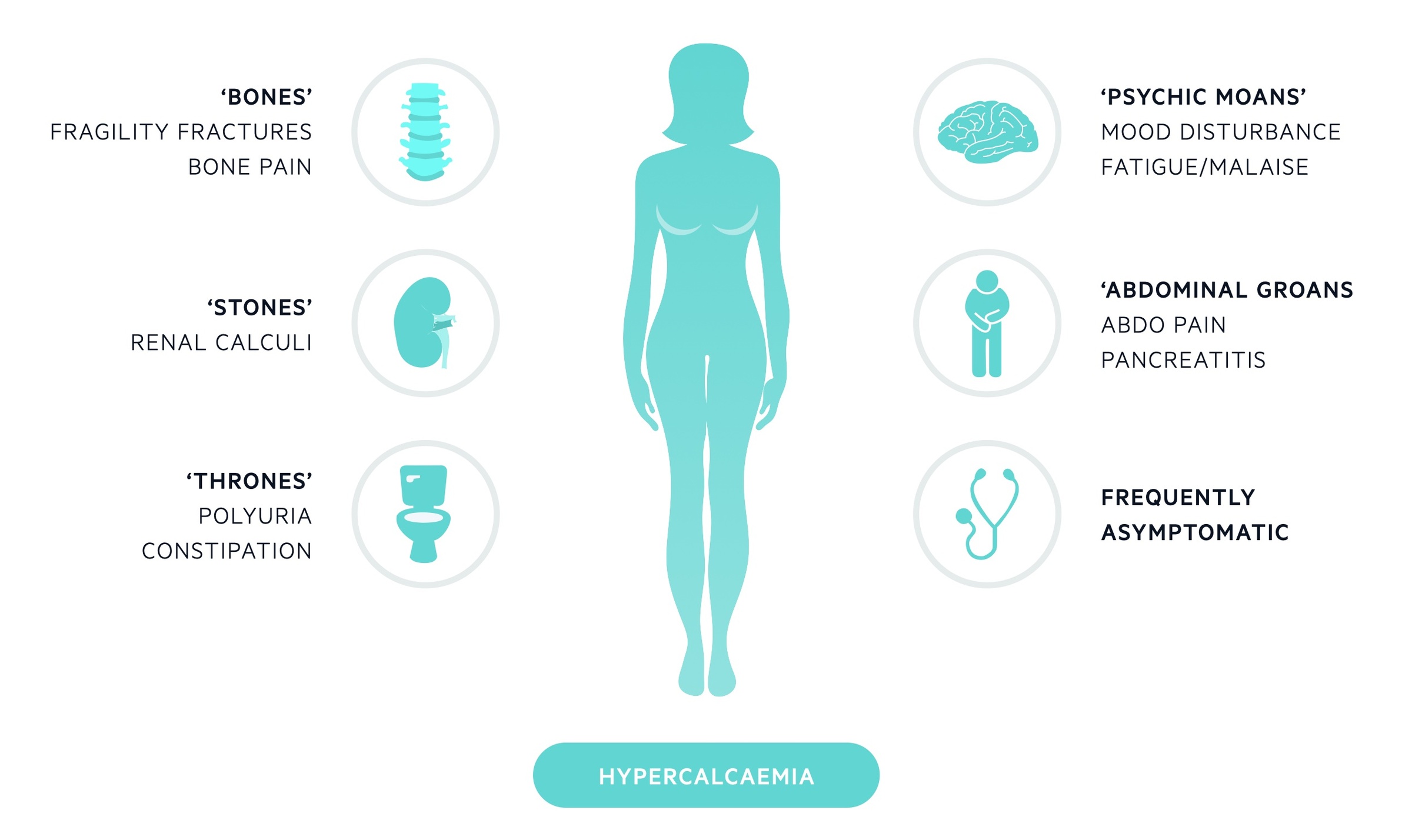 The diagnosis of hypercalcaemia is based on a serum corrected calcium > 2.6 mmol/L.

First confirm hypercalcaemia with a bone profile. Most laboratories will automatically give a corrected calcium result.

PTH is essential in the work up of hypercalcaemia. It is useful at differentiating between primary hyperparathyroidism and hypercalcaemia of malignancy.

In suspected malignant cases, PTHrP may be requested. Other common investigations include:

The management of hypercalcaemia depends on the severity and underlying cause.

The management of severe hypercalcaemia initially involves the use of intravenous fluids. This is one of the classic situations when the addition of a loop diuretic (e.g. furosemide) to fluids can be used to enhance urinary calcium excretion.

Bisphosphonates can be considered in severe hypercalcaemia, particularly if malignancy is suspected. They are analogues of inorganic pyrophosphate, which are absorbed onto the surface of the boney network and work by inhibiting the action of osteoclasts.

Unfortunately, they can take several days (2-4) before their action is noticed but they provide calcium-lowering effects over a prolonged period (2-4 weeks). Pamidronate or zoledronic acid are typically used. They are potentially nephrotoxic and contraindicated in severe renal impairment.

An alternative to bisphosphonates is denosumab, which is a monoclonal antibody that binds to RANK ligand and inhibits the action of osteoclasts.

Other treatment options depend on the suspected underlying cause:

We'd love to hear your feedback on our Hypercalcaemia notes.