Reentrant circuits are one of the main mechanisms underlying tachyarrhythmias. 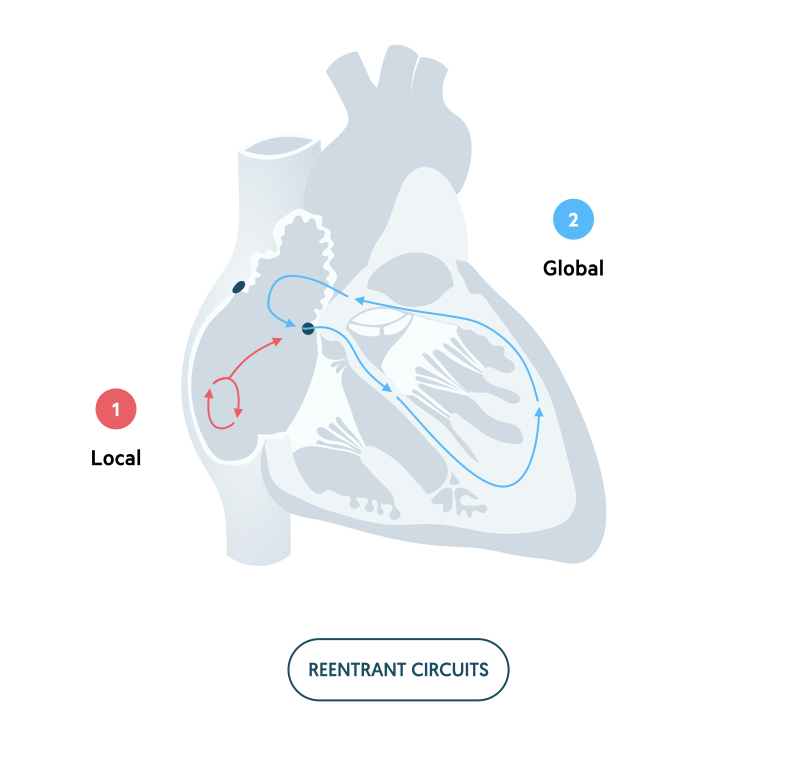 The key to differentiating a supraventricular from ventricular tachyarrhythmia is the width of the QRS complex (i.e. narrow vs broad).

During normal electrical activity, the coordinated excitation of the ventricles via the bundle of His, bundle branches and Purkinje fibres leads to fast depolarisation and a narrow QRS (< 120 ms). If electrical activity is initiated within the ventricles and travels by an abnormal path across the ventricular muscle, depolarisation occurs at a slower rate. This results in an abnormal, wide appearing QRS complex (> 120 ms). 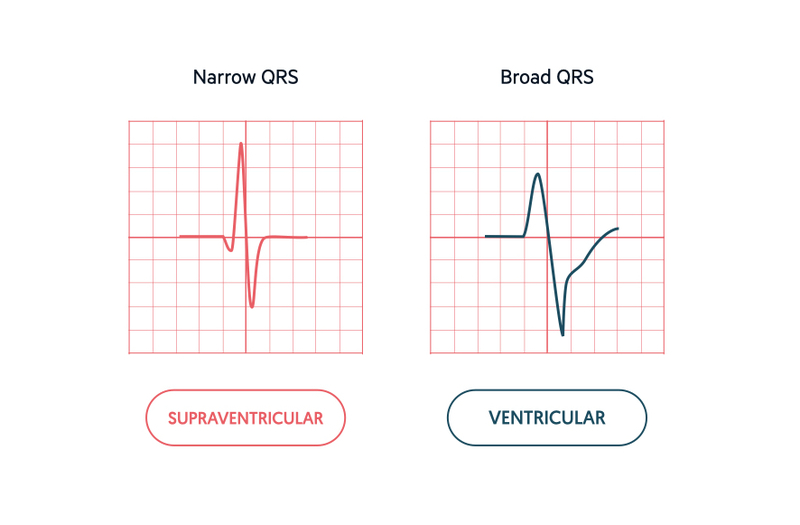 The width of the QRS complex can provide evidence of the origin of arrhythmias in most cases. However, accessory pathways can be an exception to this rule. 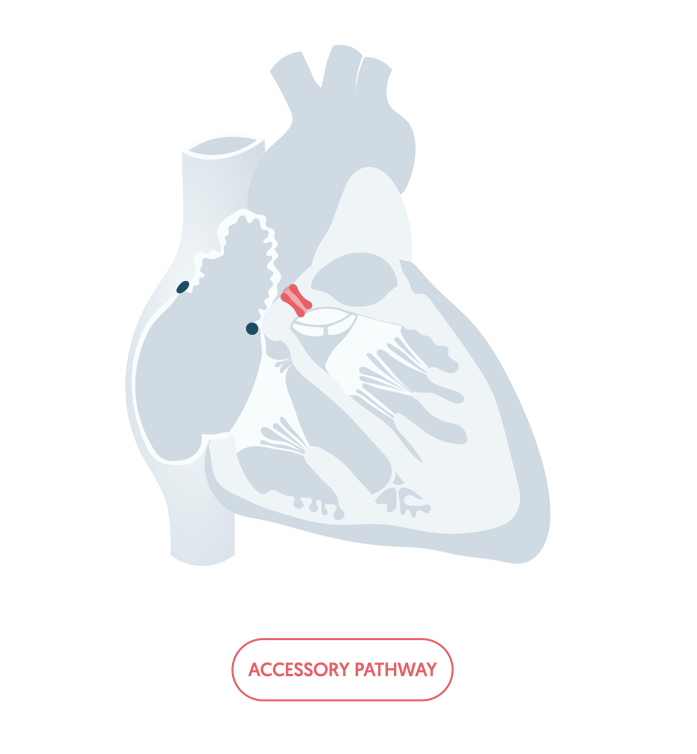 Under normal circumstances at rest, our heart should be in sinus rhythm with an accompanying rate of 60-100 bpm. If the defining features of normal sinus rhythm are met but the heart rate is fast (> 100 bpm), we call it sinus tachycardia. 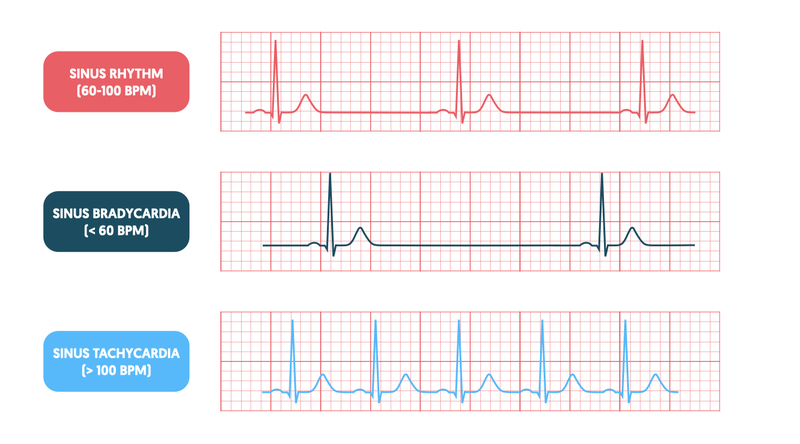 Sinus tachycardia is a normal physiological response when the body is put under stress. This can occur due to exercise, intercurrent illness, or underlying pathology.

Atrial tachycardia occurs due to an abnormal focus of activity undergoing rapid depolarisation in the atria.

There are different types of atrial tachycardia depending on the origin of the abnormal electrical activity. It may be due to a single foci undergoing regular, organised depolarisation, multiple sites of competing atrial activity or a small reentrant circuit in the atria. 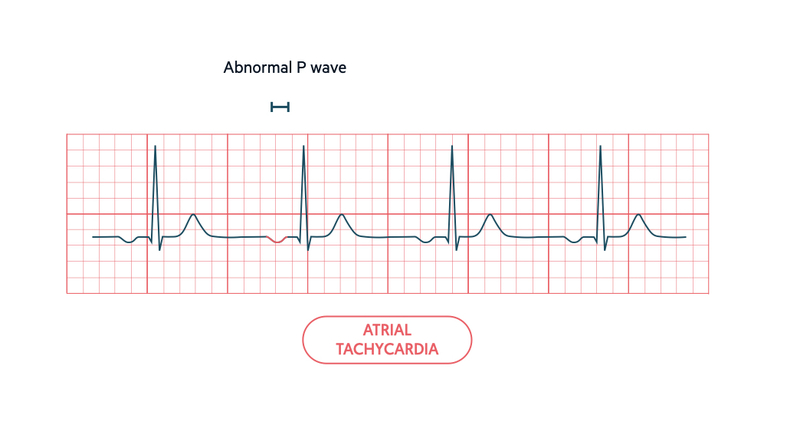 Normal P wave morphology is reliant on normal depolarisation of the atria from SAN to AVN. When electrical activity occurs at another site, the P wave will appear different. The actual morphology depends on the area in relation to the AVN. Typically, there is an abnormal P wave axis with inverted (negatively deflected) P waves in the inferior leads (II, III, aVF).

Atrial flutter is a classical example of a macro-reentrant circuit, which occurs within the atria.

Atrial flutter is a specific type of atrial tachycardia that occurs due to a rapid macro-reentrant circuit within the atria. It has a characteristic rate of depolarisation > 250 beats per minute (bpm).

Due to the rapid depolarisation, the isoelectric line on the ECG is not flat. Instead, it appears as a typical sawtooth pattern, which is best visualised in the inferior leads (II, III, aVF). 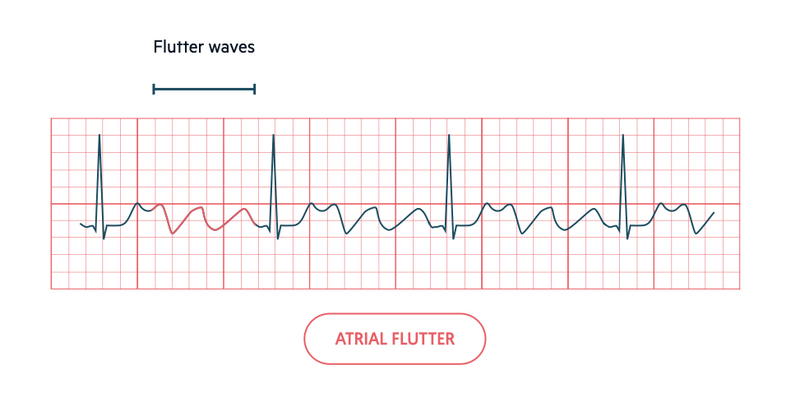 Due to the fast atrial rate the AVN causes a ‘block’. This means some of the atrial activity is not conducted to the ventricles. This is a physiological response of the AVN to allow time for ventricular filling. In atrial flutter this is classically seen as a 2:1 block (two flutter waves to one QRS complex) but higher degrees of block can occur.

AF is an extremely common tachyarrhythmia that occurs due to multiple waves of spontaneous depolarisation leading to fragmentation of the normal electrical activity. This causes muscle fibres to contract independently leading to ‘fibrillation’ of the atrial muscle.

As multiple waves of electrical activity (varying in strength) reach the AVN, it intermittently conducts these to the ventricles. This results in an irregular rhythm, which is characterised by three main ECG features:

For more information see our notes on atrial fibrillation.

Abnormal tachyarrhythmias derived from reentrant circuits involving the AVN are known as ‘SVT’.

Confusingly, a supraventricular tachycardia (SVT) can refer to the origin of a tachyarrhythmia or a subset of abnormally fast heart rhythms that are due to reentrant circuits involving the AVN.

This is the most common SVT (50-60%), which typically occurs in patients with a structurally normal heart. It is due to additional conduction pathways within the AVN, which allows initiation of a reentrant circuit.

There is usually a rapid, narrow-complex tachycardia with absent P waves.

This is the second most common SVT (30%), which usually presents at a younger age than AVNRT and can occur in children. It is due to an accessory pathway away form the AVN. These pathways may enable electrical impulses to pass antegrade (atria to ventricles) or retrograde (ventricles to atria), which establishes the reentrant circuit. 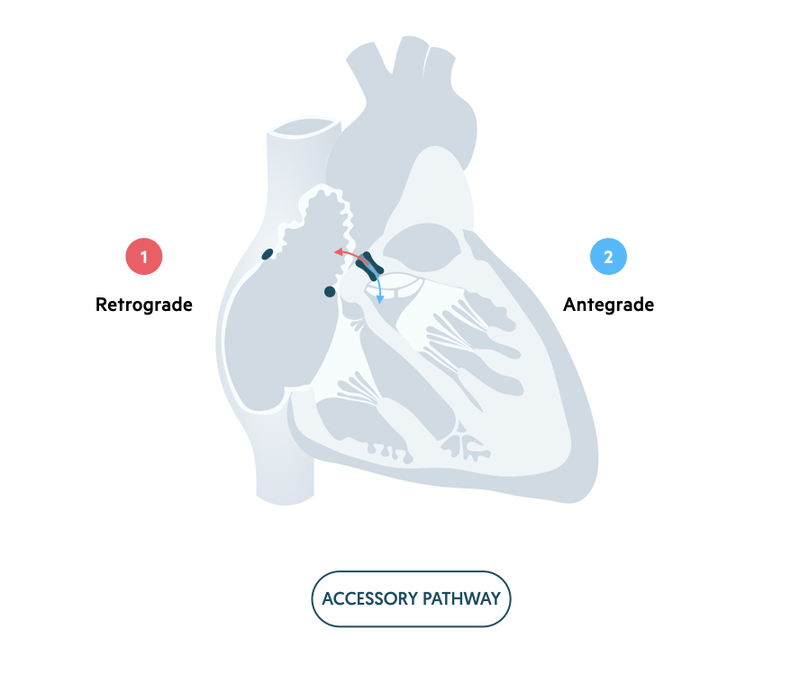 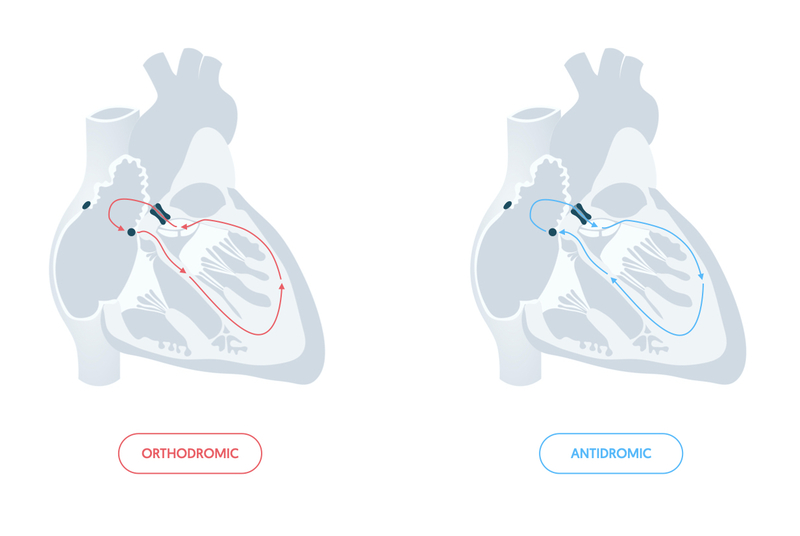 On a resting ECG, we may see evidence of an accessory pathway due to pre-excitation (early depolarisation of the ventricles). The classic pre-excitation syndrome that leads to episodes of AVRT is Wolff-Parkinson-White (WPW) syndrome.

WPW is a preexcitation syndrome that is characterised by a congenital accessory pathway and episodic tachyarrhythmias.

The ECG pattern in WPW is due to the early (i.e. pre-excitation) of the ventricles via the accessory pathway. This leads to a short PR interval as there is no AV conduction delay, which is followed by an early slurred upstroke in the QRS complex, called a delta wave. The remaining QRS complex is normal because the usual conduction via the AVN, His bundle and branches ‘catches up’ with the pre-excitated impulse. 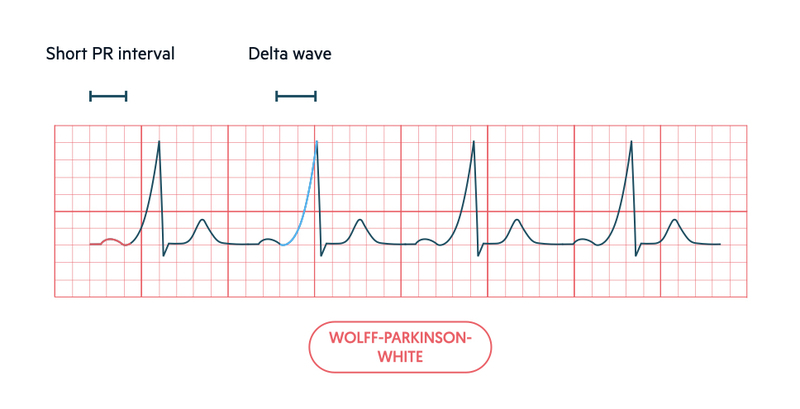 The main concern in WPW is development of AF, which may be conducted to the ventricles leading to a rapid ventricular response. This could deteriorate into ventricular fibrillation.

Ventricular tachycardia occurs due to a focus of electrical activity in the ventricles undergoing rapid depolarisation.

Ventricular tachycardia (VT) occurs due to rapid, recurrent ventricular depolarisation from a focus within the ventricles. This is commonly due to scarring of the ventricles following myocardial infarction.

VT is a life-threatening arrhythmia that may lead to loss of consciousness, loss of cardiac output and ultimately cardiac arrest. VT without a pulse is one of the ‘shockable’ cardiac arrest rhythms.

It may be difficult to distinguish VT from a supraventricular tachyarrhythmias that presents with a broad QRS complex (e.g. SVT with bundle branch block, AVRT with antegrade conduction via accessory pathway). We refer to these supraventricular rhythms with abnormal conduction as SVT with aberrancy.

Certain ECG features help differentiate these two conditions. However, this is beyond the scope of these notes.

Polymorphic VT is a particular type of VT that is due to depolarisation of multiple foci within the ventricles leading to variable QRS complexes. It is usually secondary to myocardial ischaemia.

Torsades de pointes is a subtype of polymorphic VT that is characterised by ventricular tachycardia that ‘twists’ around the isoelectric line. This subtype occurs secondary to a prolonged QT interval.

Torsades de pointes is important to recognise because the management is aimed at shortening the QT interval with intravenous magnesium sulphate. If a patient is unstable with Torsades de pointes, they should undergo immediate DC cardioversion as with any unstable tachyarrhythmia.

This arrhythmia is incompatible with life and will result in loss of consciousness and cardiac arrest.

Ventricular fibrillation (VF) occurs when the ventricular muscle fibres contract independently. On the ECG, this is seen as no coordinated electrical activity with a chaotic, fibrillating baseline.

VF is incompatible with life and patients who development this rhythm will go into cardiac arrest. It is one of the ‘shockable’ cardiac arrest rhythms that requires immediate DC cardioversion.

We'd love to hear your feedback on our 6. Tachycardias notes.