Murmurs are a common finding in clinical practice. They can help to identify underlying cardiac disease, and as such are often examined in clinical OSCEs.

To accurately identify and characterise murmurs, a good understanding of the underlying physiological and pathological processes is needed as well as clinical experience.

In this note, we give an overview of cardiac auscultation and some common causes of murmurs.

Cardiac auscultation is a key part of any cardiovascular examination.

A traditional stethoscope has two sides:

There are four areas that are considered standard to auscultate as part of any cardiovascular exam. These correspond with the best area to auscultate each valve (not necessarily their anatomical location):

Additional areas may be focused on depending on the underlying suspected pathology. For example, the murmur of aortic stenosis may be heard to radiate to the carotids whilst mitral regurgitation may radiate to the axilla. 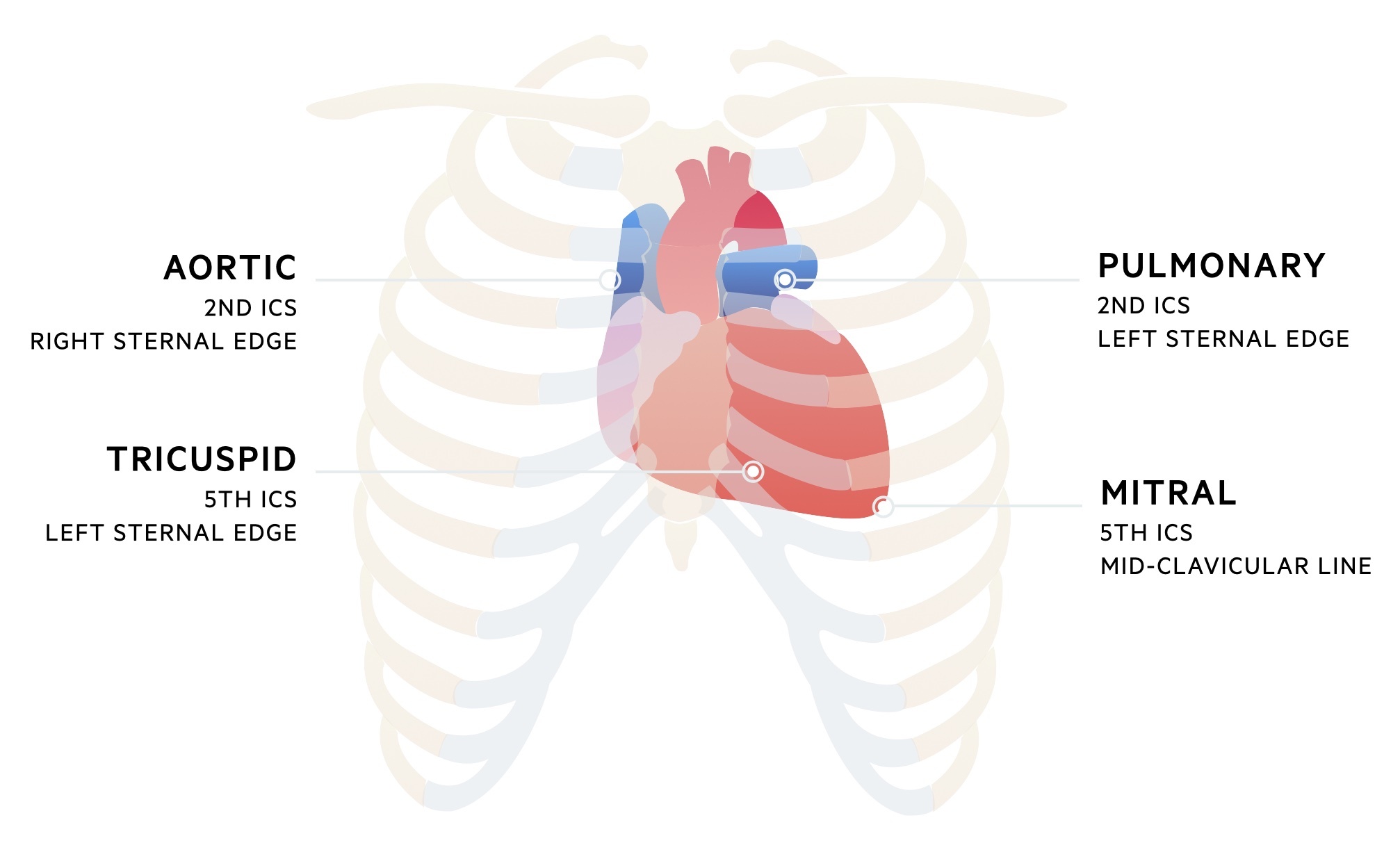 During the majority of the examination, the patient should be positioned on a couch with the head of the bed angled at 45 degrees.

After auscultating the four areas described above, carry out the following position changes (in those who can tolerate them) to accentuate murmurs:

The sounds are often described as ‘lubb (S1) dub (S2)’. The are caused by the closure of the atrioventricular and semilunar valves during the cardiac cycle.

The first heart sound, S1, is made by the closure of the atrioventricular valves (the mitral and tricuspid valves). Their closure is prompted by the beginning of ventricular systole which forces these valves closed.

On auscultation, S1 is said to be heard best at the apex of the heart.

The second heart sound, S2, is made by the closure of the semilunar valves (the pulmonary and aortic valves). Their closure is prompted by ventricular diastole allowing the pressure differential with the great vessels to force the valves closed.

Typically the pulmonary valve closes just after the aortic valve as right ventricular ejection lasts slightly longer. This is accentuated during inspiration where increased venous return (intra-thoracic pressure drops during inspiration drawing blood in) results in prolongation of right ventricular ejection. S2 may be heard to be ‘split’ into A2 and P2 components - a finding that is referred to as physiological splitting.

Abnormal splitting may be indicative of disease: 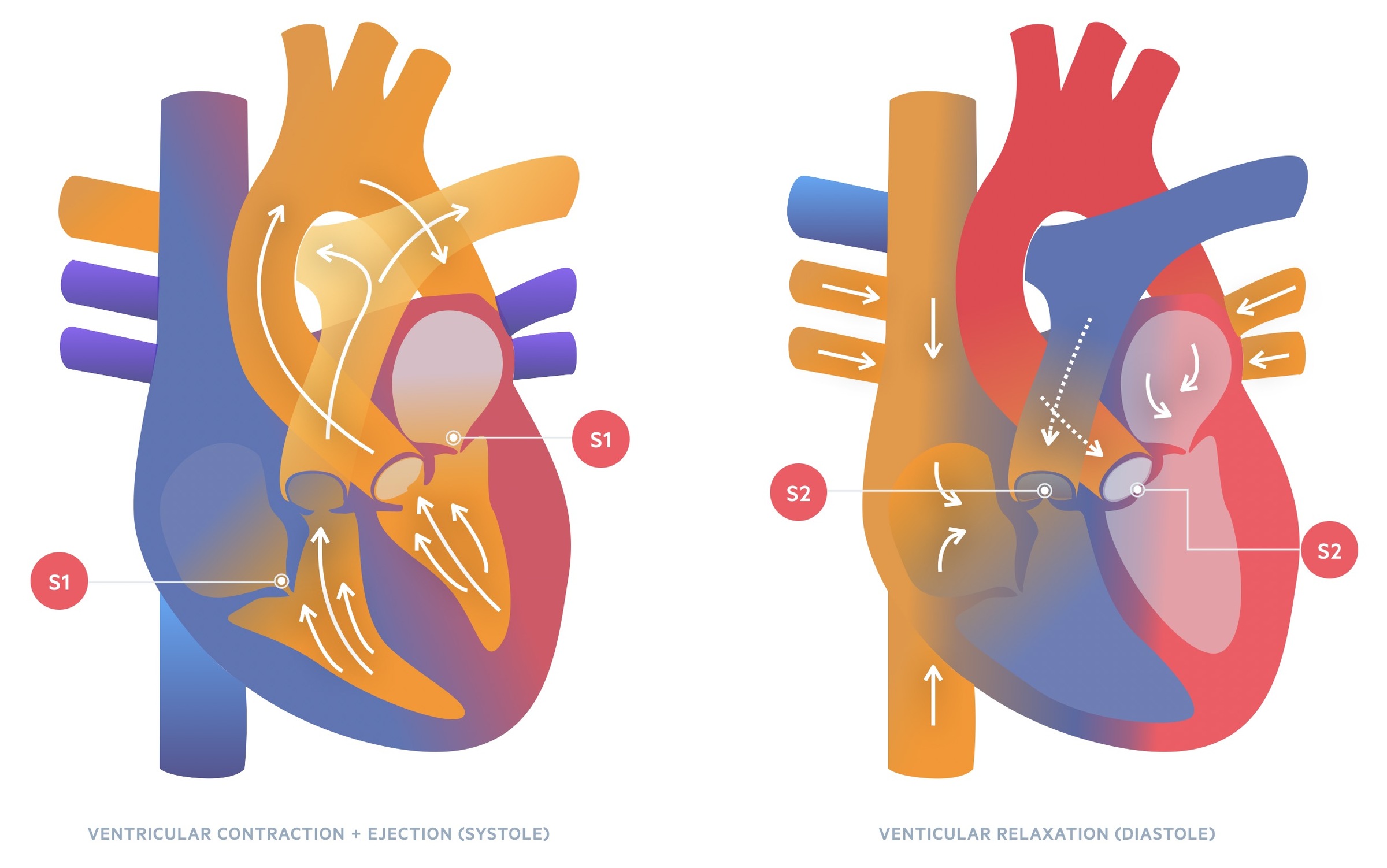 A third heart sound, S3, may be heard in healthy children and young adults. It is a sound heard in early diastole due to rapid ventricular filling. In older patients, it may be a sign of heart failure.

A fourth heart sound, S4, may be heard in otherwise healthy older patients. It is a sound heard in late diastole due to rapid ventricular filling during atrial systole. It can represent a non-compliant ventricle that may be due to pathologies like hypertrophic cardiomyopathy and aortic stenosis.

Murmurs can represent valvular pathology or be physiological. Identifying the origin of a murmur can be challenging. Though we have increasingly easy access to transthoracic echocardiography it is important to try to correctly identify a murmur clinically. There are a number of things to consider to help this process:

The Levine scale can be used to grade murmurs:

It is very rare for a diastolic murmur to be grade 5 or above and as such, they are typically graded 1-4.

Systolic murmurs may occur during any part of systole. Here we describe some of the most common (and commonly examined) systolic murmurs.

It is important to note that murmurs are not necessarily exactly the same amongst different patients with the same pathology. The murmur and additional signs of each of these conditions are somewhat dependent on the severity of the pathology (e.g. the degree of stenosis) and the presence of associated pathologies or changes that occur secondary to the pathology itself (e.g. left ventricular hypertrophy occurring secondary to aortic stenosis). This is as true of conditions causing diastolic murmurs, which are discussed in the chapter below, as it is of systolic murmurs.

Aortic stenosis is a common valvular pathology affecting 2-7% over the age of 65. It is characterised by an ejection systolic 'woosh' that is often one of the easiest murmurs to identify as a medical student - as such it often comes up in OSCEs!

Murmur: ejection systolic, described as crescendo-decrescendo. Radiates to the carotids.

Best heard: on expiration in the aortic area.

For more detail check out our notes on Aortic stenosis.

Pulmonary stenosis is often seen as a component of congenital syndromes but may also be acquired later in life. Similar to aortic stenosis it results in an ejection systolic murmur.

Best heard: on inspiration at the pulmonary area.

Aetiology: mutation of β-myosin heavy chain or myosin-binding protein C are the most common causes.

Mitral regurgitation refers to incompetence of the valve that may occur due to abnormalities to the valve leaflets, subvalvular apparatus or left ventricle. It may be acute or chronic.

Best heard: over the apex. Depending on the direction of the regurgitant jet, may radiate to the axilla.

For more detail check out our notes on Mitral regurgitation.

Tricuspid regurgitation refers to incompetence of the tricuspid valve. It may be primary (i.e. disease directly affects the valve and its apparatus) or secondary (i.e. caused by dilatation of the right ventricle). In adults most cases are secondary (also termed functional) in nature.

Aetiology of secondary TR: any cause of pulmonary hypertension and secondary dilation of the right ventricle.

Best heard: on inspiration at the lower left sternal edge, may be more lateral if right ventricle very enlarged.

Ventral septal defects (VSD) are common congenital cardiac malformations affecting around 1 in 500 births. The size of the defect and the resulting ‘shunt’ (abnormal connection and flow of blood between pulmonary and systemic circulation) determines the clinical features. It may be ‘isolated’ or seen in conjunction with other cardiac malformations.

It causes a pansystolic murmur due to blood shunting from left to right during systole. In larger defects, changes to the right side of the heart secondary to elevated pressures can lead to a softening of the murmur as pressures equalise. Reversal of the shunt, Eisenmenger’s syndrome, converts it to a cyanotic heart defect.

Aetiology: largely unknown, some cases are associated with chromosomal abnormalities (trisomy 13, 18 and 21).

Symptoms: dyspnea, fatigue, Eisenmenger’s syndrome (development of a right to left shunt due to rising right-sided pressures resulting in cyanosis)

Additional signs: there are a wide range of signs that may be present. This includes signs of heart failure and/or Eisenmenger’s syndrome. These are highly dependent on the size of the defect, direction of the shunt and other cardiac abnormalities associated with or secondary to the VSD.

Ejection type systolic murmurs are common in otherwise healthy individuals. There are thought to be a number of causes including vibration of the pulmonary trunks. They can be hard to distinguish from other causes of systolic murmurs but the remainder of the examination should be entirely unremarkable. A transthoracic echocardiogram may be used to exclude cardiac pathology.

Aortic regurgitation (AR) results from an incompetent aortic valve causing regurgitant flow of blood in diastole. This leads to a murmur in early diastole. It is typically considered as either acute or chronic depending on its presentation.

For more detail see our notes on Aortic regurgitation.

Best heard: on inspiration in the pulmonary area.

Mitral stenosis (MS) is characterised by valvular obstruction to flow from the left atrium to the left ventricle. This leads to a murmur typically described as a low-pitched mid-diastolic rumble.

Best heard: at the apex with breath held in expiration, with the patient lying on their left side. It is best heard with the bell of the stethoscope.

For more detail see our notes on Mitral stenosis.

Tricuspid stenosis (TS) is characterised by valvular obstruction to flow from the right atrium to the right ventricle. TS is relatively rare and when it occurs it is normally associated with other valvular pathologies.

Austin-Flint murmur: is a mid-diastolic rumble seen in severe aortic regurgitation. Its exact aetiology is still debated, but it may be related to vibration of the mitral valve secondary to the regurgitant jet.

We'd love to hear your feedback on our Murmurs notes.