Peptic ulcer disease (PUD) is an umbrella term for the development of two different ulcers: gastric ulcers and duodenal ulcers.

PUD is more common with increasing age, with a suspected lifetime prevalence of 5-10%. PUD used to affect males more commonly than females, but the prevalence between gender is now similar, ♀ 1: 1 ♂. Duodenal ulcers are 3-4x more common than gastric ulcers.

It is important to understand the difference between ulcers and erosions:

Gastric ulcers are found most commonly on the lesser curvature of stomach. Duodenal ulcers are most common in the first part of the duodenum called the ‘duodenal cap’. 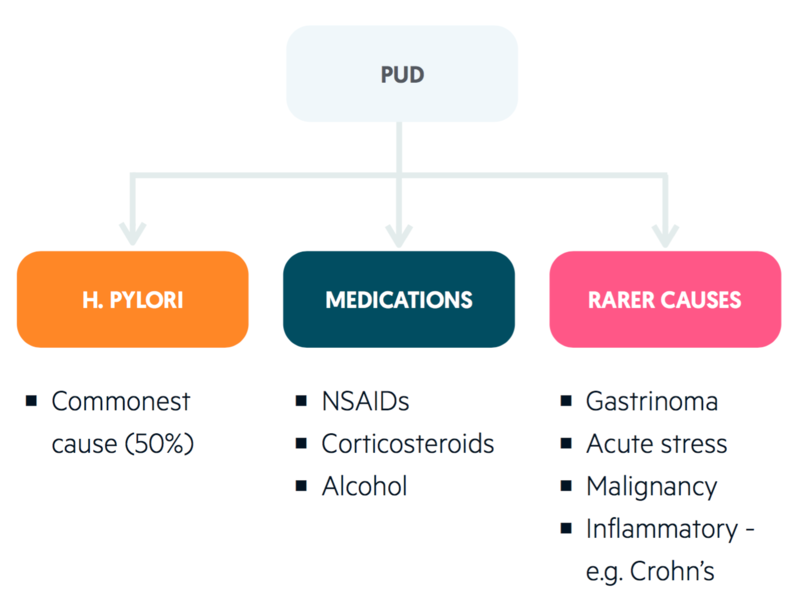 H. pylori is a gram negative spiral-shaped, flagellated, micro-aerophilic bacterium, which is thought to colonise up to 50% of the world’s population.

H. pylori predominantly colonise the antrum of the stomach, which is the least acidic. Colonisation of the gastric antrum can lead to persistent low-grade inflammation.

This may damage the epithelial lining leading to the destruction of the normal gastric mucosal barrier. This promotes the development of ulcerations and other complications (e.g. upper GI bleeding, malignancy, gastritis, gastric outlet obstruction).

H. pylori are able to establish themselves within the gastric mucosa because of their ability to adhere tightly to the epithelium and excrete an arsenal of effector molecules.

H. pylori contain the enzyme urease, which is able to convert urea into water and ammonia. The resultant ammonia is able to buffer hydrogen ions within the stomach. This process raises the pH and allows the bacterium to survive.

CagA and VacA are important effector molecules secreted by H. pylori, which cause disruption of host cells.

NSAIDs are a common cause of GI disturbance (e.g. PUD, gastritis) through their inhibition of cyclooxygenase-1 (COX-1).

COX-1 is important in the production of prostaglandins. Prostaglandins have a number of protective effects on the gastric mucosa such as the inhibition of enterochromaffin-like cells (ECL). This inhibition reduces the secretion of histamine, a hormone that stimulates parietal cells to secrete hydrochloric acid (HCl).

Some newer NSAIDs (e.g. Celecoxib) have been developed that selectively target COX-2. These drugs may be taken in rheumatic disease to help reduce the number of GI side-effects. However use is limited owing to the increased risk of cardiovascular complications.

Zollinger-Ellison syndrome occurs secondary to a hyper-secreting gastrinoma within the pancreas.

Hypergastrinaemia leads to the development of multiple peptic ulcers. Sporadic cases account for around 80% of cases of Zollinger-Ellison syndrome.

The hallmark features of PUD are epigastric pain, dyspepsia and heartburn. 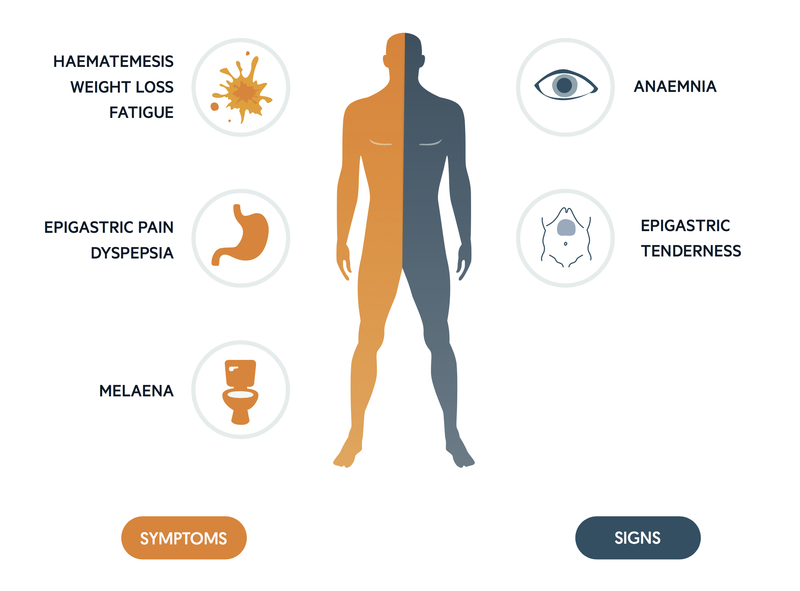 Patients with PUD may present acutely with features of an acute upper GI bleed (UGIB) or perforation.

Gastric outlet obstruction may occur secondary to a number of disease processes. The main features of GOO are nausea and vomiting.

Hypokalaemic, hypochloraemic metabolic alkalosis ​is the classical metabolic derangement associated with GOO. It occurs due to the loss of hydrochloric acid and potassium.

The definitive diagnosis of PUD is made on endoscopic examination. However, only a small number of patients presenting with dyspepsia/heartburn require upper GI endoscopy.

H. pylori testing may be non-invasive or invasive. 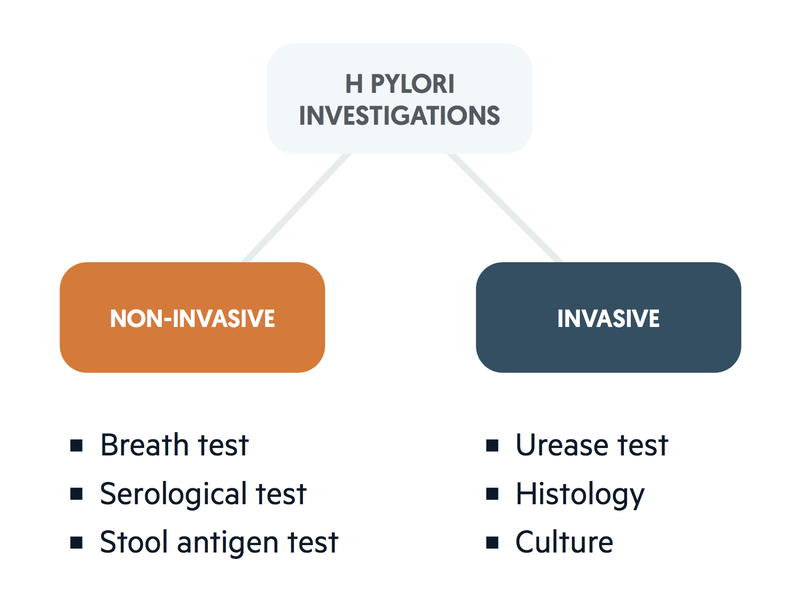 The 13C Urea breath test is a useful screening test for the presence of H. pylori. The subject ingests 13C urea, which is converted to 13CO2 in the presence of urease. It is a highly sensitive 97.6% and specific (96%) test.

The breath test can be used for both diagnosis and testing for eradication. Importantly, patients must be off PPI’s prior to testing.

A blood test is taken which checks IgG antibodies against H. pylori. This is a useful test for diagnosis and epidemiological studies. In general, it is a good test (sensitivity 90% and specificity of 83%). However, it cannot be used to check for eradication owing to the persistence of antibodies within the serum.

The stool test assesses the faeces for the presence of H. pylori antigen. It is a reliable test (sensitivity 97.6% and specificity 96%), and can be used for both diagnosis and testing for the eradication of H. pylori. Like the breath test, patients must be off PPI's prior to testing.

The urease test is also known as the CLO test (campylobacter-like organism test). Biopsies are taken from the mucosa during endoscopy and added to a medium containing phenol red and urea.

The presence of urease leads to the splitting of urea, and the release of ammonium that leads to a pH colour change. The test may be falsely negative in the presence of PPI therapy.

A section of a biopsy taken during endoscopy can be examined under a microscope with a Giemsa stain looking for the organism.

A biopsy specimen taken at the time of endoscopy can be used for culture of the organism. This test is useful for assessment of antibiotic sensitivities.

Patients are given a 7-day course of triple-therapy, which includes a PPI and dual antibiotic therapy.

If 1st line therapy fails patients are given a different antibiotics and an extended course. The choice of pharmacotherapy is dependent on allergy status and previous antibiotic exposure.

Specialist referral is warranted in patients with disease that has not responded to second-line therapy or with unexplained symptoms.

Patients who test positive for H. pylori should be offered eradication therapy. The length of treatment (and need for specialist intervention) is dependent on H. pylori status, NSAID involvement and symptomatic control.

Lifestyle modifications are key to the management of PUD. Patients should maintain a healthy diet avoiding foods and drinks that exacerbate their symptoms.

Patients may find that sleeping with their head raised helps with nocturnal symptoms. Smoking cessation and weight loss are advised. Psychological support may be necessary.

In general, PPIs (e.g. omeprazole, lansoprazole) should be offered first line to reduce acid secretion. They work through the inhibition of the H+/K+ ATPase pump on the luminal surface of parietal cells. Histamine receptor antagonists (H2RA) may be offered if there is an inadequate response to initial PPI therapy.

We'd love to hear your feedback on our Peptic ulcer disease notes.