Cholelithiasis (gallstones) refers to the development of a solid deposit or ‘stone’ within the gallbladder.

Though largely asymptomatic in a significant proportion of patients they become problematic. In the UK around 60,000 cholecystectomies are performed each year. 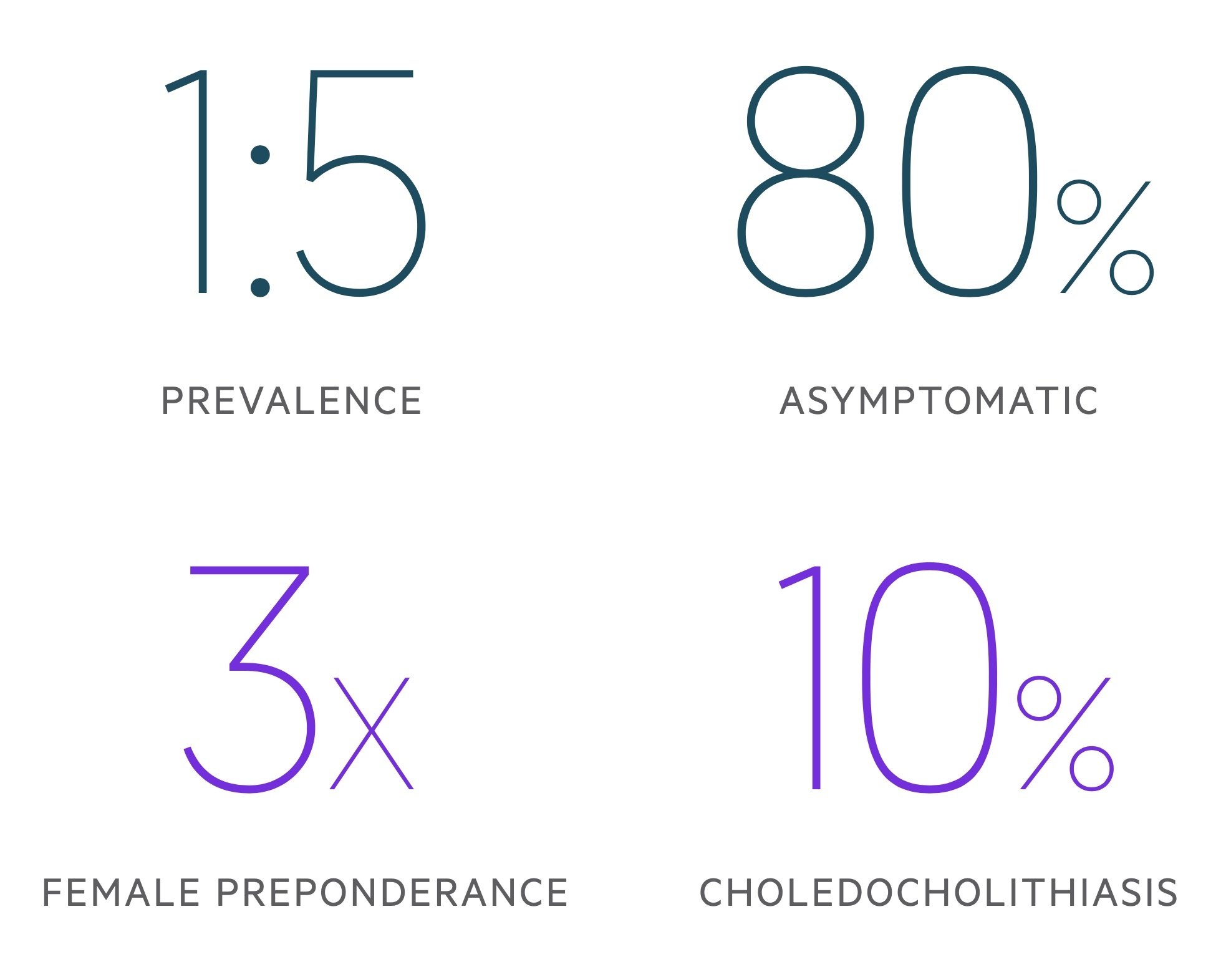 The terminology around gallstones can be confusing so is worth reviewing:

Gallstones affect up to 20% of the population.

The prevalence of gallstones increase with advancing age before levelling off in the sixth - seventh decade of life. They are more common in women and tend to affect those of caucasians, native american and hispanic ethnicity more.

Outside of haemolytic anaemias, gallstones are rarely seen in childhood. The vast majority of people with gallstones will remain asymptomatic (80%).

A number of risk factors are associated with the development of cholelithiasis.

The gallbladder is a small organ with a capacity, in an adult, of about 50ml.

A diverticulum, the gallbladder is continuous with the cystic duct and thus common hepatic duct. It measures between 7-10 cm in an adult. It receives a blood supply from the cystic artery. This vessel has variable origin but most commonly arises from the right hepatic artery.

Note: Hartmanns pouch refers to dilatation or outpouching at the neck of the gallbladder. Stones may impact here causing extrinsic compression of the extrahepatic bile duct leading to Mirrizi's syndrome.

The biliary tree is a ductal system that transmits bile produced by hepatocytes to the second part of the duodenum (via the ampulla of Vater). By convention it is divided into intrahepatic and extrahepatic ducts. Here we will focus on the extrahepatic ducts. 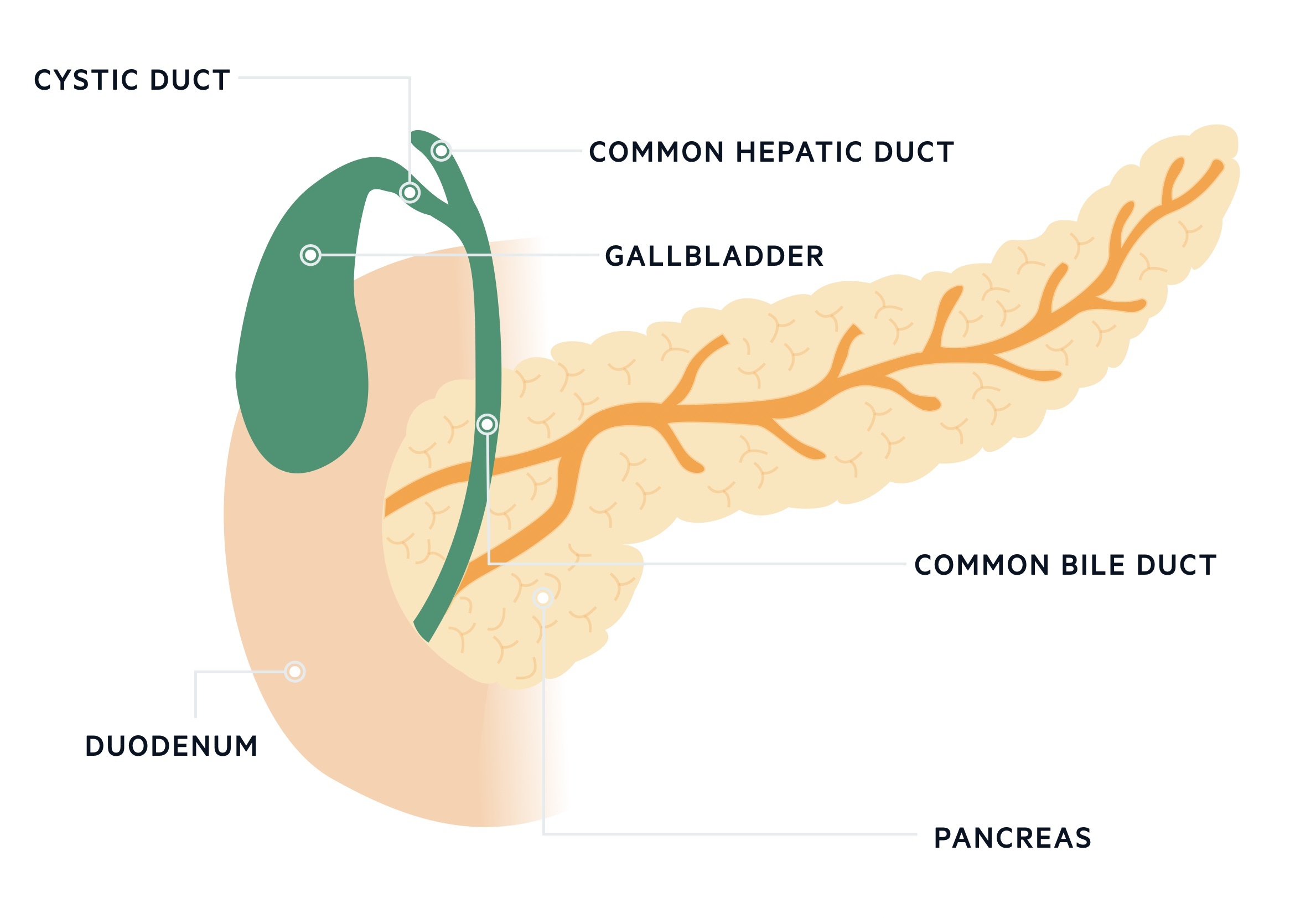 The common bile duct forms a common channel with the pancreatic duct just proximal to the ampulla of Vater. The ampulla of Vater is an orifice that allows bile to drain into the second part of the duodenum, it is surrounded by the sphincter of Oddi. 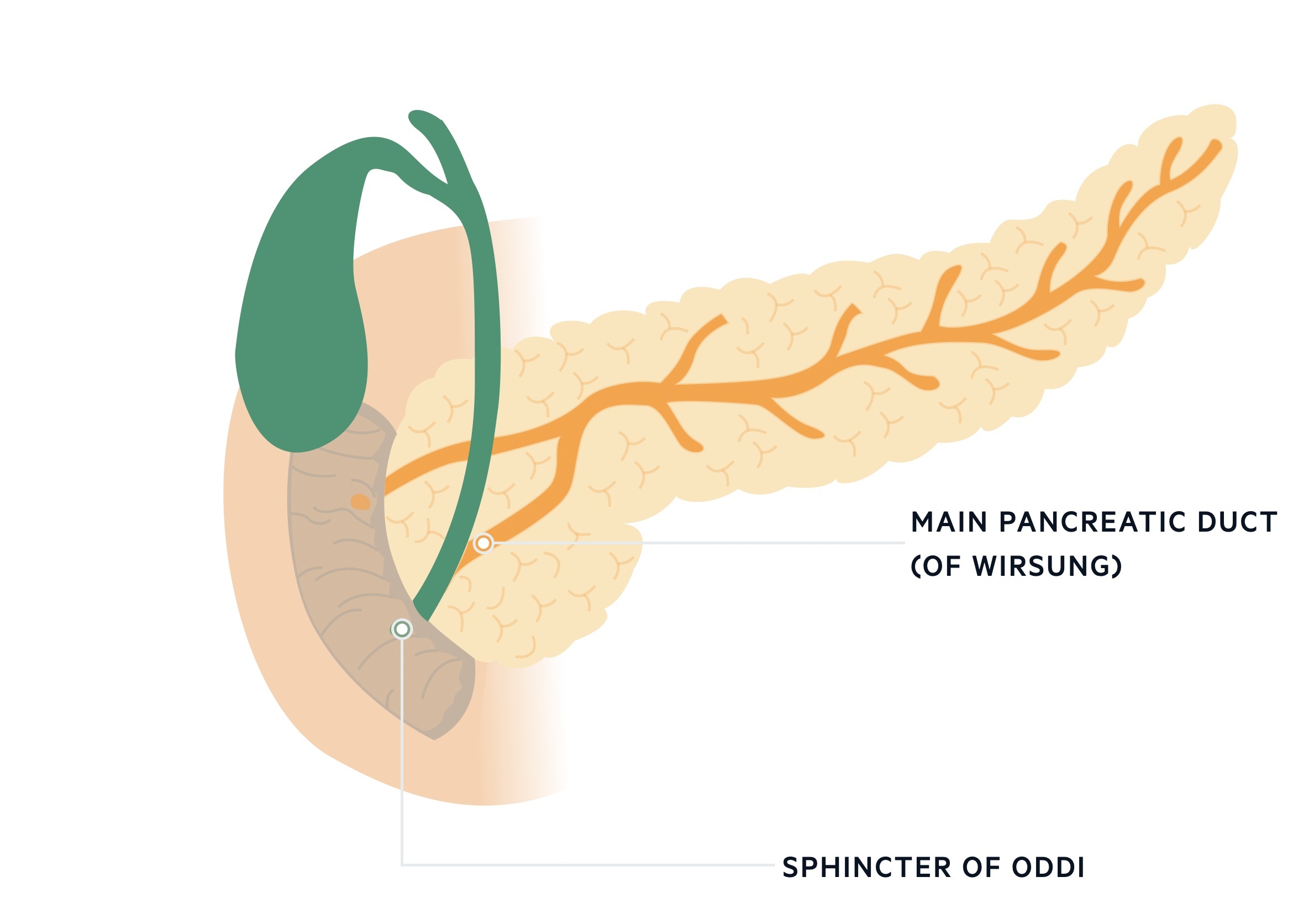 The gallbladder stores and concentrates bile.

Bile is secreted by hepatocytes into the biliary circulation. It is composed of bile acids (or salts), phospholipid, bilirubin, cholesterol and water. Imbalance in composition and stasis leads to stone formation.

Cholesterol stones are the most common type found in western populations, estimated to account for up to 75-85% stones. They occur due to crystallisation of cholesterol in bile (along with other compounds) due to supersaturation of cholesterol and crystillisation promoting factors. Disturbances in gallbladder motility may also contribute.

These are dark stones composed primarily of calcium bilirubinate, accounting for around 10-20% of stones. They occur in people with increased amounts of bilirubin in their bile - hyperbilirubinbilia. This occurs in patients with increased haemolysis (i.e. haemolytic anaemias).

These stones are a mix of calcium bilirubinate and a calcium salts of fatty acids, accounting for around 5% of stones. They mostly occur in association with infection (bacterial or parasitic) and may develop de novo in the bile duct after cholecystectomy.

Gallstones become symptomatic in around 20% of patients.

Gallstones are normally asymptomatic. However in a proportion of patients they may cause pathology. A range of conditions may be caused:

Biliary colic: This is an acute, severe, RUQ/epigastric pain that tends to be self-limiting. It is the most common complication of gallstones.

Acute cholecytitis: Impaction of a stone within the cystic duct leads to acute cholecystitis, inflammation of the gallbladder. It presents with signs of infection, RUQ pain and tenderness.

Acute cholangitis: Gallstones are the most common cause of acute cholangitis. Impaction of a stone in the common bile duct impairs drainage leading to infection affecting the biliary tree.

Acute pancreatitis: Gallstones are the most common cause of pancreatitis in the UK, they occur when stones get impacted distally in the biliopancreatic duct causing disruption to flow of pancreatic enzymes.

We'd love to hear your feedback on our Cholelithiasis notes.